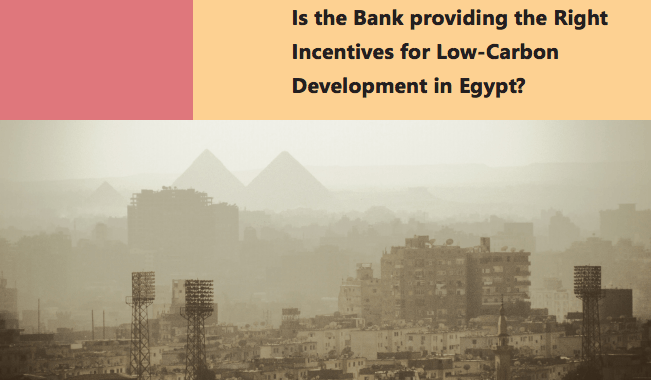 By
Jano Charbel and Mada Masr

The World Bank’s development policies are contributing to increased carbon emissions in Egypt and exacerbating risk for some of the country’s most vulnerable communities, according to a report recently issued by the Bank Information Center (BIC), a non-profit NGO that monitors the policies of the World Bank, along with those of regional development banks.

The report focuses on the World Bank’s Development Policy Finance (DPF) program in Egypt and the policies it has supported, questioning whether they have curtailed greenhouse gas emissions in line with the Paris Agreement, which the World Bank has committed to and which lays out conditions for a low-carbon global economy where temperature increases will remain below the 2C rise that is estimated would have occurred by 2100 if pre-industrial conditions had continued.

While the World Bank has prioritized Egypt’s ability to meet its energy needs at an affordable price by encouraging new subsidies on fossil fuels, coal and electricity, it has neglected policies that would encourage moving toward clean and renewable sources of energy, despite the fact that “the potential for renewable energy in Egypt is enormous.” In doing so, the BIC argues that the World Bank has not considered the effects these policies will have on Egypt’s most vulnerable.

“Rising sea-levels have already begun to impact the Nile Delta and in the near future could displace over 2 million people and destroy significant agricultural production,” writes BIC, outlining existing risks.

“Given Egypt’s significant climate change vulnerabilities and that the country already exceeds the per capita emissions limit for staying under 2 degrees warming, any further expansion of fossil fuel burning potentially adds to increasing the severity of climate change impacts to Egypt and the poor,” the report states. “Public money simply cannot be used to subsidize and accelerate the expansion of fossil fuels.”

The report was compiled with the assistance of Ragia al-Gerzawy, from the Egyptian Initiative for Personal Rights, who tells Mada Masr that Egypt’s government lacks a clear environmental strategy.

While she welcomes the state’s ongoing move to decrease its subsidies for gasoline, diesel and natural gas, Gerzawy says that “these fuel subsidies were benefiting the wealthy classes — with their businesses and industries which operate on subsidized fuel — far more than they were benefiting the working classes.”

However, Gerzawy goes on to add that authorities in Cairo are “focused on economic growth, along with the so-called trickle-down effect, with little to no consideration for the environment, the health of its citizens, or the associated impact on the tourist industry – all of which will be negatively affected” by ill-planned national policies.

Dina Khalil, a research and advocacy unit manager at Takween Integrated Community Development, says that Cairo suffers from many infrastructural problems – especially in working class districts – and is thus ill-equipped to deal with the potentially disastrous effects of climate change.

“However, in the new satellite cities and gated communities – residents enjoy the luxuries of swimming pools and golf courses,” Khalil says, adding that the state has allocated wealthier neighborhoods larger development budgets for use in the event of a crisis.

Egypt amended the executive regulations of the environment law in April 2015 to allow industrial factories, including cement factories, to use coal as an energy source, while also introducing new regulations.

Gerzawy argues that, while Egypt is diversifying its energy mix, it is relying too heavily on new energy sources which are high pollutants, including coal for use in the cement factories, along with the country’s active plans to establish coal-powered electricity stations and its first nuclear power plant.

In its response to the BIC report, the World Bank defended its DPF policy in Egypt, asserting that extenuating circumstances have prompted the increased use of coal. “Coal was a response to a shortage in its production of natural gas, rather than to any subsidy being provided to the private sector for coal.”

Louise Sarant speaks to Environment Minister Khaled Fahmy at COP22 about Egypt’s inclusion of coal in its energy mix.

However, Egypt’s move toward coal in its national energy mix has offset the benefits associated with reforming fuel subsidies, the report explains. Although the higher cost of electricity and fuel may reduce energy consumption — a burden that will be passed onto citizens — Egypt’s natural gas shortages, along with increasing gas tariffs, have led to fuel switching rather than a move toward clean energy. “There is evidence of significant fuel switching from costlier natural gas to cheaper coal … Such fuel switching may help to address natural gas supply shortages, but comes with negative climate change and public health impacts.”

“Energy mixes must be affordable, clean, and environmentally sound. Egypt has indeed moved toward a more diversified energy mix, yet this has actually contributed to more pollution, and wider gaps between different income groups,” Gerzawy says. “Why are we investing in coal and nuclear energy plants, when these are costly, risky, and carry with them serious environmental repercussions — when we could be moving toward readily available sources of clean energy?”

Gerzawy points out that Egypt has practically no naturally occurring coal or uranium, and that these highly polluting sources of energy must be imported, at great expense.

Additionally, while the World Bank says in its response that the 2015 loan supports a medium-term strategy to address energy pressures, the BIC sees the loan as having long-term effects. “The new subsidized coal-fired power plants will lock Egypt into carbon-intensive infrastructure for decades.”

The report points out that by providing incentives for fossil fuels (including coal and electricity subsidies), along with inadequate support for renewable energy and ineffective climate change risk assessments, the DPF is not effectively prioritizing low-carbon options in Egypt.

“Egypt is planning the construction of highly polluting coal-powered electricity stations on the Red Sea, along with a nuclear power plant by the Mediterranean Sea,” Gerzay explains, adding that little has been revealed regarding the state’s environmental impact assessment reports for this new infrastructure.

“Egypt’s new investment laws do not encourage the use of clean energy and may actually be encouraging even more polluting sources of energy,” Gerzawy adds.

While it is Egypt’s domestic responsibility to protect its own environment and the health of its population, she says that “the World Bank should take into consideration issues of global climate change by helping developing states to formulate policies for investment and sustainable development, in order to ensure their social and environmental advancement.”

For example, Gerzawy points out that Egypt lacks the sufficient means to promote domestic and industrial use of solar panels or wind turbines through incentives and feed-in tariffs (a system which promotes the generation of energy through the provision of contracts and other financial motivations).

She explains that the system of feed-in-tariffs is indeed available in Egypt, “but there isn’t enough enforcement or public awareness regarding these mechanisms. In general, the population may not be aware of these feed-in-tariffs, or mechanisms for the generation of clean energy.”

Investment is the crux of the issue: despite Egypt’s abundance of year-round sunshine, solar panels for the generation of domestic or industrial electricity are not readily available, nor are they cheap, according to Gerzawy.

“Some companies are moving toward generating solar power for themselves, as opposed to generating power for national electricity grids,” she explains. Local banks are typically willing to provide big investors in clean energy with big loans but do not provide ordinary citizens with medium or small loans to help them in transitioning toward clean energy.

Egypt has recently signed 12 agreements with energy companies for the extraction of gas and oil, including that of the recently discovered Zohr gas field in the Mediterranean Sea.

AD
You Might Have Missed
Where do old lesbians go to die?
Carbon Colonies & A Green New Deal
What we talk about when we talk about trees
Mugamma revisited: Reimagining the building and the square
AD
Jano Charbel
78 articles on Mada