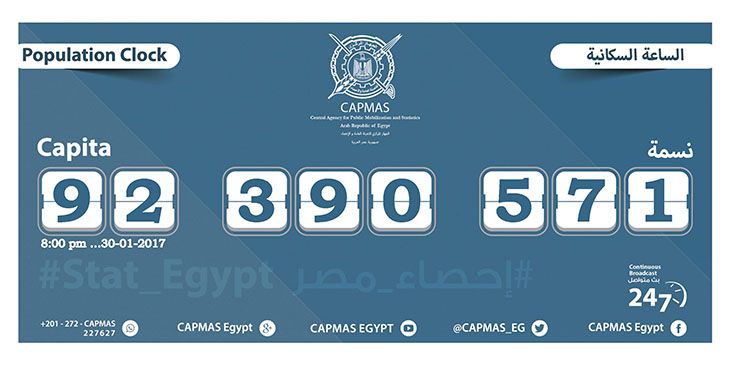 In a speech at the Police Academy last week on the 6th anniversary of the 2011 revolution, President Abdel Fattah al-Sisi pointed to Egypt’s overpopulation crisis as one of the major challenges confronting the state and its efforts toward development, saying that the population is now four and a half times what it was in 1952.

Sisi based this statistic on a recent census conducted by the state’s Central Agency for Public Mobilization and Statistics (CAPMAS), which estimated the number of resident Egyptians to be 92 million. In another speech at the second state-sponsored National Youth Conference in the Upper Egyptian governorate of Aswan on Saturday, the president referred again to Egypt’s poverty rates, exclaiming “we are very poor” multiple times.

Just a few days after Sisi’s Police Academy speech, Tareq Tawfiq, spokesperson for the state-appointed National Population Council, argued that population growth is one of the main reasons for the high levels of poverty in Egypt, which CAPMAS estimated to fall at 27.8 percent in 2015.

Tawfiq told local media outlets that the poverty rate will exceed 35 percent “if population growth rates are not controlled, and if birth rates remain unchanged.” He added that the poverty line, which, according to a survey conducted by the Central Auditing Agency for 2012/20113, was set at the annual income level of LE2,789 pounds, is expected to rise to include those who earn LE5,700 per year.

Tawfiq did not clarify which sources he based the link between poverty and increasing birth rates on, however.

While Egypt’s rate of poverty could exceed 35 percent, the underlying causes of increasing poverty are the state’s economic reforms and austerity measures, which are directly associated with conditions for Egypt’s loan from the International Monetary Fund, Heba al-Leithy, professor of statistics at the University of Cairo and CAPMAS consultant, told Mada Masr. These measures include the imposition of a value-added tax amounting to 13 percent, the devaluation of the Egyptian pound and the reduction of fuel subsidies, leading to the sharp increase in inflation rates at the beginning of this year.

Leithy referred to a study conducted following the government’s implementation of a new value-added tax in 2016, which revealed that if inflation increased by 15 percent then Egypt’s poverty rate would amount to 35 percent. In Egypt’s current situation, where the rate of inflation has reached 24.3 percent, the rate of poverty will increase beyond this projection, Leithy argued.

Although Tawfiq did make reference to the “the potential impact” of liberalizing Egypt’s currency exchange rate and the country’s increasing inflation rate, his remarks centered upon the relationship between domestic living standards and the increasing national population. “Unregulated overpopulation serves to reduce individuals’ standards of living, while also rolling back the standard of services that they can receive,” he said.

Major General Abu Bakr al-Gendy, the chairman of CAPMAS, issued statements to the press claiming that population growth is a “problem, predicament and curse,” which is a “burden on society that is dragging us down, as the state does not have the resources to support them.”

Hania Sholkamy, professor at the American University in Cairo’s Social Research Center, said that despite the existence of a correlation between poverty and population growth, the nature of this relationship is ambiguous and not causal. She pointed out that the poorest fifth of the Egyptian population (the lowest 20 percent of income earners) are largely individuals without immediate families.

Egypt does have a real population problem, Sholkamy clarified, but argued that the responsibility of addressing this issue should fall on the state, rather than citizens. Sholkamy went on to add that the government must pursue policies that deter rapid population growth, including the provision of social services such as education and healthcare, and that the state must not punish citizens for having larger families.

Population growth may be a positive factor if the state moves to invest in younger populations, Leithy pointed out, arguing that while countries such as China and India have massive populations, the economic policies of these states in terms of education and training assisted their youth, and geared them toward national development.

Laithy agreed with Sholkamy regarding the Egyptian state’s failure to provide services that assist the poor. Increased childbirths are considered to be a safety valve for the poor in their confrontation of poverty, as children grow up to assist their parents in old age, she said, adding that this reasoning would dissipate if the state would provide families with social security mechanisms.

AD
You Might Have Missed
Mugamma revisited: Reimagining the building and the square
Carbon Colonies & A Green New Deal
Where do old lesbians go to die?
What we talk about when we talk about trees
AD
Osman El Sharnoubi
31 articles on Mada