The first days of Donald Trump’s presidency have generated revulsion among those of us who stand with Muslims, women, Latinos and indigenous people. But despair has not been met with paralysis.

Trump’s presidency, which began on January 20, may represent a win for right-wing populism in the United States, but demonstrations began throughout the country before his inauguration — from student-led demonstrations and walk-outs in Philadelphia, Pennsylvania and Chicago, Illinois to resistance by the Act Up Now to Stop War and End Racism (ANSWER) Coalition and Disrupt J20 in Washington DC[1]. Members of the International Longshore Warehouse Union Local 10 at Oakland Port mobilized a strategic sick day on January 20 to show their disapproval of the newly elected president, which resulted in the closure of a marine terminal and the suspension of a number of shipping imports.

The women’s march was a dress rehearsal for what was and still is to come.

Women’s marches took place across the globe on January 21, from San Francisco to Nairobi, Kenya, with people who had never attended a protest before taking part. An estimated 470,000 to 680,000 people participated in Washington DC, and 750,000 in Los Angeles. People held signs that read, “Resistance is Fertile,” “Solidarity Trumps Hate” and “Not my President.” In Mexico City, a woman held a sign saying, “Trump Respeta a Los Migrantes” (Trump, Respect migrants). These acts of resilience show that many women have had enough and came together in opposition to a president that has been accused of being a sexual predator. The women’s march was a dress rehearsal for what was and still is to come, as the litany of onslaughts continues. 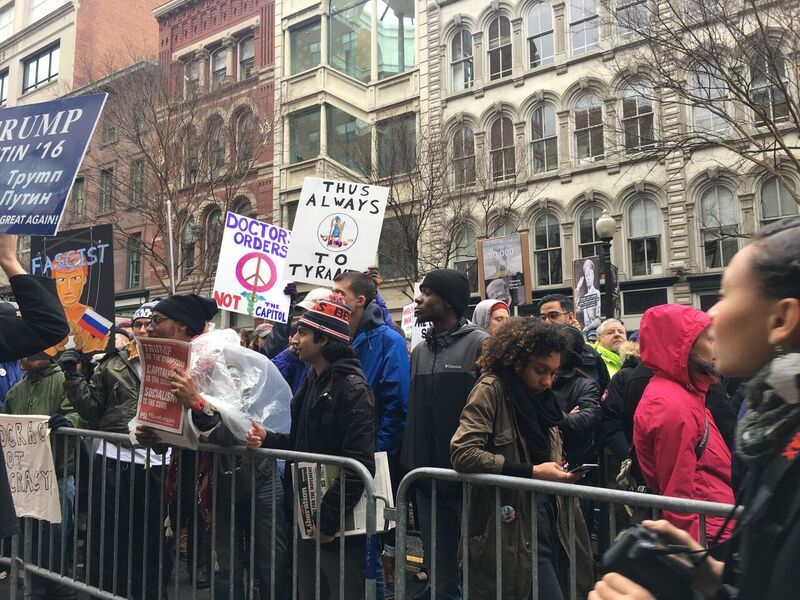 Within a few days of entering the presidential office, Trump proposed a series of orders and policies that have shocked and debilitated people in the US and overseas. He promised to repeal the Affordable Care Act (ACA/Obamacare), Medicare privatization and defund Planned Parenthood. On January 23, he reinstated a global gag order defunding international organizations that mention abortion as a medical option. He has also said he will revive the Keystone Pipeline and Dakota Access Pipeline — two initiatives that were stalled following mass action by environmental and Indigenous groups. The Keystone pipeline, projected to cost US$8 billion, would span nearly 1,200 miles and transport 800,000 barrels of petroleum from Canada to the Gulf Coast, causing massive destruction to the flora and fauna in the Great Plains and Gulf of Mexico. Indigenous people are leading the call to continue resistance for a sustainable earth, with the water protectors at Standing Rock vowing to challenge the executive order.

They are not the only environmental groups being targeted. The United States Environmental Protection Agency (EPA) was told to rescind its activities, impacting a wide range of activity, from park restoration to preventing employees from talking about climate change. In response, Badlands National Park tweeted a number of scientific facts as an act of resistance against the federal policies. Trump has actively denied climate change in the past. On November 6, 2012, he tweeted:

The concept of global warming was created by and for the Chinese in order to make U.S. manufacturing non-competitive.

As onerous as this statement is, Trump’s climate change denial is part of a broader nationalist economic agenda to make the US less dependent on oil from the Middle East.

Trump has also begun to implement isolationist economic policies, such as taking steps to withdraw the United States from the Trans-Pacific Partnership trade deal, accompanied by a series of anti-immigration policies, including a proposal to build a wall along the 2,000-mile border between the US and Mexico. One of his most egregious policies, marshaled in a series of executive orders on January 25, restricts entry to the US from Muslim majority countries: Iraq, Iran, Libya, Somalia, Sudan, Syria and Yemen. The ban has already taken effect, and dozens of people from Muslim-majority countries have already been detained at airports throughout the US.

A Chilean woman attempted suicide at John F. Kennedy Airport (JFK) in New York City when she was informed she would be deported. Saira Rafiee, an Iranian doctoral student and Professional Staff and Congress union member, was prevented from returning to the City University of New York Graduate Center to continue her studies. Narges Bayani was detained at JFK airport, and her story is still developing. These stories are not an aberration but part of wider Islamophobic and xenophobic policies that were normalized by the Obama administration.

The executive orders for a Muslim registry didn’t start with Trump; he is continuing an anti-immigration policy that was accelerated under former president Barak Obama, although it didn’t extend to green card holders previously. The Visa Waiver bill (H.R. 158) was issued in late 2015, and Obama deported more immigrants than any US president in history. Under Obama, however, the anti-deportation demonstrations were small and local in nature, but the recent ban has applied to a wide range of people at airports from Seattle to Boston and generated mass condemnation. Protests have been largely spontaneously coordinated by refugees, seasoned activists, immigration lawyers and others, all of who have proclaimed, “Immigrants are welcome,” “Let them in!” 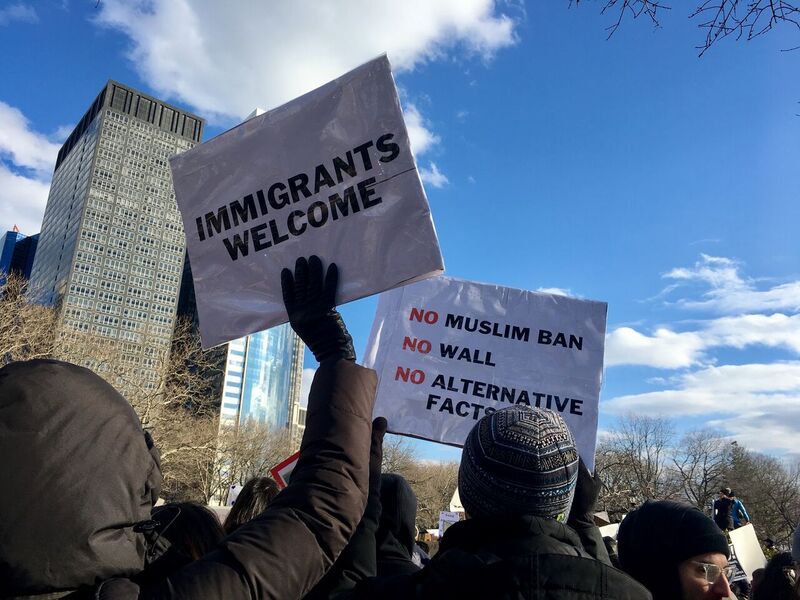 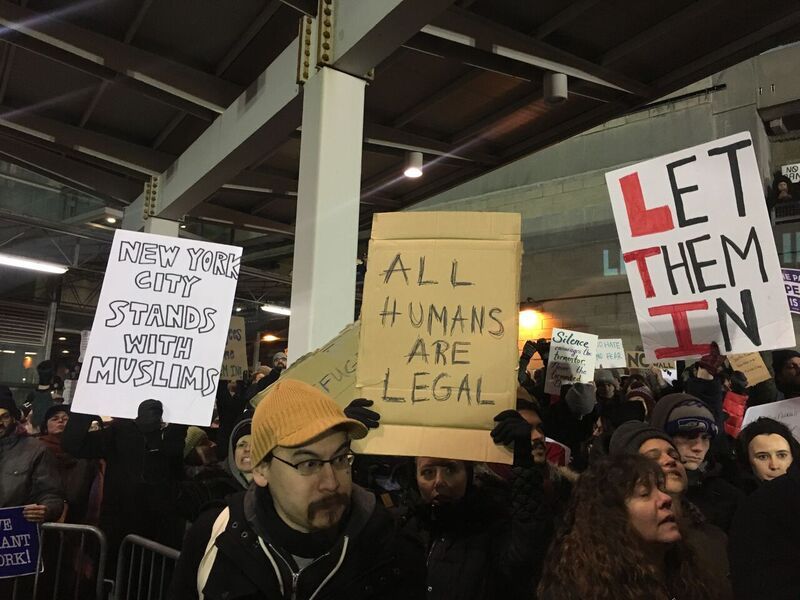 These stories are not an aberration, but part of wider Islamophobic and xenophobic policies that were normalized by the Obama administration.

By January 28, all detainees at Chicago O’Hare International Airport had been released. In New York City, a federal court decision stated that the government would not send immigrants back to their countries if they would face “irreparable harm.” The details of whether or not permanent residents from the seven countries will be included is still being contested. Some border control agents have defied the federal court decision and followed Trump’s executive order anyway.

Now is the time to develop an international strategy and collective responses to a slew of US policies that will detrimentally impact many people. Sadly, the US Democratic Party leadership has not outwardly challenged any of Trump’s policies, and Democratic Party leaders such as Chuck Schumer and Elizabeth Warren have approved many of his cabinet positions, such as Ben Carson’s appointment as Secretary of Housing and Urban Development. It is clear that independent organization, with strategies for confronting racist and right-wing agendas, is highly necessary. 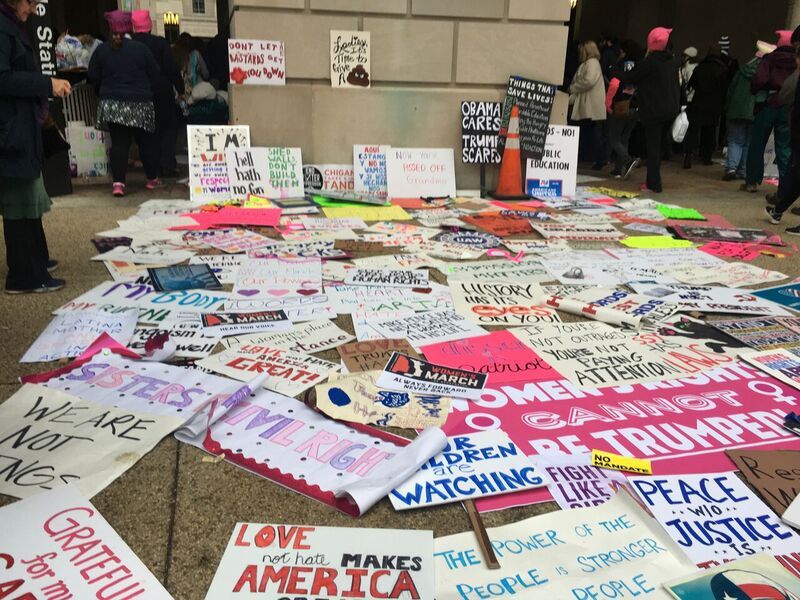 Leftist activists held an anti-inauguration discussion on January 20 at the historic Lincoln Theatre in Washington to discuss tactics moving forward. During the event, journalist Anand Gopal said: “A single protest, as important as they are, has never changed anything. But the social movements that link protests — that is the life-blood of resistance. That is the only thing ultimately that has ever changed anything … Resistance isn’t a moment. Resistance isn’t a state of mind. Resistance is a tapestry that is collective and enduring.”

From Standing Rock to Palestine, people are calling for massive civil disobedience to oppose projections and promises under Trump. It will be important to have concrete aims and political organization to sustain any achievable gains. Although the political terrain is volatile and disparaging for many, a sense of collective and continuous action is key to challenging this US president.

[1] ANSWER began as a massive anti-war organization after the US invaded Iraq in 2003, while Disrupt J20 is a spontaneous organization that formed in light of Donald Trump’s electoral win.

AD
You Might Have Missed
Mugamma revisited: Reimagining the building and the square
Where do old lesbians go to die?
Carbon Colonies & A Green New Deal
What we talk about when we talk about trees
AD
Edna Bonhomme
3 articles on Mada

Topics
Related
January 25 2017
Defeat as a useful sentiment
Laura Bird | Authenticity and possibility in collective defeat
environmentalism
What Standing Rock can tell Tahrir
Sharif Abdel Kouddous | Maybe the Standing Rock victory is the pattern of the world: Moments of beauty that cannot last
Donald Trump
Trump and the possibilities of resistance
Edna Bonhomme | As the US enters a harrowing period, it is worth asking how communities build solidarity networks
US elections
How Donald Trump won the US presidency
Ellis Goldberg | Ellis Goldberg explains the American voting system in an attempt to understand how Trump won the presidency.