While President Abdel Fattah al-Sisi laid out a number of decisions during the second monthly youth conference in Aswan on Saturday that will affect Nubians in the country’s south, activists contend that the measures remain short of the action required of the state.

The most notable decision concerns the Forkund village, which was at the center of a November demonstration 200 kilometers away from the village where a caravan of protesters who were travelling to stage a protest were halted by security forces. In his comments at the conference held over the weekend, Sisi stated that Forkund is now excluded from the wider New Toskha Development Project, and that the state will prepare a plan to develop the village within three months.

The president also announced a number of development projects in Nasr al-Nuba and Wadi Karkar, both of which are currently inhabited by Nubians, though not a part of Nubian historical land. Sisi also promised to launch an authority tasked with developing the southern area of the Nile Valley, which does not satisfy the obligations outlined in the Constitution to launch a authority with a similar function, but specific to Nubia.

While focusing on development plans, Sisi also adopted a strident tone toward those “inciting strife” among Egyptians, calling them “people of evil.” 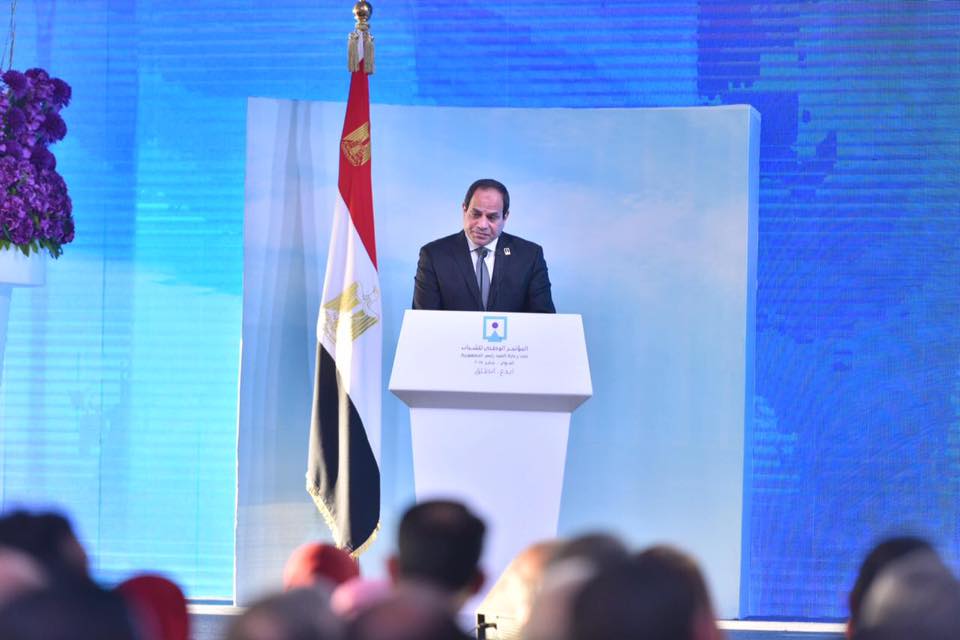 “My aim in these meetings is not to give any chance to people who incite strife and cause problems within the state,” the president said. “I’m very much aware of the current problems, as I have discovered that there is someone telling the people of Nubia that the country is not granting them their rights.”

Lawyer Mohamed Azmy, who was part of the protester delegation that met with Prime Minister Sherif Ismail and Parliamentary Speaker Ali Abdel Aal after the four-day November demonstration was disbanded, told Mada Masr that Sisi’s announcement to retreat from annexing Forkund is a breakthrough, but added that it is not enough.

“There was no mention of the resettlement of the Nubians on their historical lands around Lake Nasser, and the decision concerning the military zones was not retracted,” he said.

Egypt’s Nubian community has long called for the right to return to lands they historically held sovereignty over and from which they have been forcibly displaced a number of times in the 20th century. The 2014 Constitution stipulates that the state must make progress in granting this right of return within 10 years of the document’s ratification, in addition to introducing measures to develop Nubian land and preserve Nubian culture.

Two presidential decisions, however, have hindered these constitutional rights. In August 2016, Sisi passed decree 355, designating 922 feddans of state-owned land to the new Toshka development project. Much of this land falls within historical Nubian sovereignty, and, under the terms of the decree, Nubians would not be granted rights to its exclusive use. In 2014, the president issued decree 444, which was later passed by Parliament, designating certain border areas as military zones that are not to be inhabited, a decision that affected 16 Nubian villages.

Magdy al-Daboudy, a Nubian activist and former member of a ministerial committee tasked with developing Nubia, told Mada Masr that the new decisions do not fully support the demands of the Nubian community.

The committee to develop Nubia was established under the auspices of the Transitional Justice Ministry in October 2014 and was composed of representatives from several state institutions, including security bodies. It prepared a draft law that would grant Nubians the right of return to develop natural resources on their ancestral lands. According to Daboudy, the draft law was submitted to former Prime Minister Ibrahim Mehleb, who is now in charge of the government’s Nubian policy.

“Mehleb is now in charge of all negotiations concerning the Nubian issue, and he has a very good draft law that grants Nubians their historical and constitutional rights, but this draft law has not been adopted by the government,” Daboudy said. “Mehleb said that he sends weekly reports to Sisi on everything related to Nuba, so why was the draft never sent to him?”

The proposed legislation would contain two principal provisions: allowing Nubians to return 44 villages from which they were forcibly displaced and fostering the economic development of area A.

“During our work on the draft law, a security delegation came to look into the military border zones before issuing decision 444, which was eventually passed one month before our draft was submitted.” Daboudy said. How come the security apparatuses never thought about the effect such a decision would have on our demands?”

AD
You Might Have Missed
Carbon Colonies & A Green New Deal
Mugamma revisited: Reimagining the building and the square
Where do old lesbians go to die?
What we talk about when we talk about trees
AD
Mai Shams El-Din
161 articles on Mada

Topics
Related
Nubians
6 Nubian activists briefly detained for protesting new presidential decree over land
Six Nubian activists were briefly detained Monday, before being released on LE200 bail each Wednesday
land expropriation
Nubian protesters suspend sit-in, meeting with PM scheduled for next week
A Nubian sit-in was suspended on Wednesday after blocking the Aswan-Abu Simbel Road for four consecutive
Nubian rights
Nubians may turn to international courts to guarantee return to their lands
Mai Shams El-Din | “We've reached the stage where we are unable to deal with the government.”
Nubians
On the edges: Nubians still live in the shadow of displacement
Dina Sayedahmed | The forced displacement of Nubian communities continues as villages are classified as military zones.