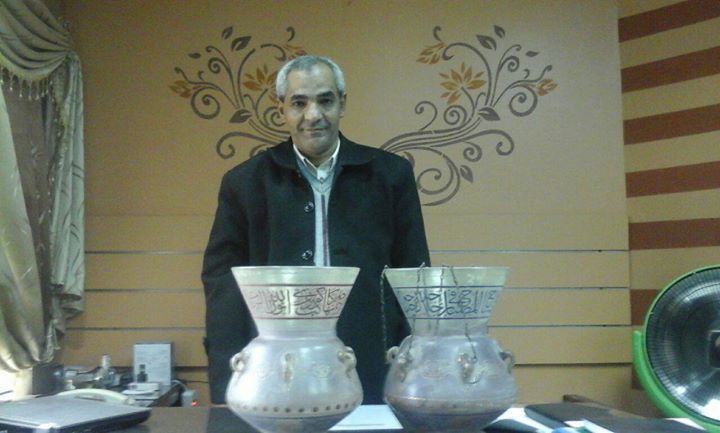 Six Islamic lanterns that were reported stolen from Cairo’s historic Rifai Mosque on January 1 were recovered this week, and have been placed on display at the Egyptian Museum in downtown Cairo.

The Antiquities Ministry issued a statement on Wednesday announcing that the intricately decorated lanterns, which are over 100 years old, were recovered by the Tourism Police and found to have been “stored in good condition.”

Police arrested two individuals in connection with the theft, the statement revealed, explaining that they were members of the crew involved in the production of the movie Al-Kenz (“The Treasure”) that had been filming inside the mosque at the time when the lanterns were stolen. A third suspect “is still at large,” it added.

These three individuals allegedly stole the artifacts from the royal hall of King Fouad I and Princess Feriyal within the mosque, and left behind replicas in place of the ones they had taken.

The state-owned Al-Ahram newspaper published photos of the two arrested suspects, claiming that they were planning to smuggle the lanterns to Qatar. Both men have been detained pending prosecution, Al-Ahram reported, and authorities hope that investigations will help lead them to the remaining individuals involved in the crime.

The recovered lanterns were placed on display at the Egyptian Museum in Tahrir Square on Thursday, as part of a showcase entitled “Egypt: Cradle of Religions,” to be inaugurated by Antiquities Minister Khaled al-Anany.

According to the statement issued by the ministry, the lanterns date back to the year 1911, during the reign of Khedive Abbas Helmy II, and were crafted from glass and enamel, decorated with intricate religious Arabic calligraphy reading, “God is the light of the heavens and earth, as the light of lantern.”

Several other historic lanterns have recently been stolen and smuggled out of the country, only some of which have been recovered. In December 2016, two classical Islamic lanterns that had been smuggled out of Egypt to the United Arab Emirates were found and subsequently placed on display at the National Museum of Egyptian Civilization.

In March 2016, one Mamluk-era lantern dating back over 600 years, to the reign of Sultan Barqouq, was recovered from a private buyer in the UK, who is reported to have voluntarily handed over the artifact upon learning that it had been unlawfully smuggled out of Egypt.