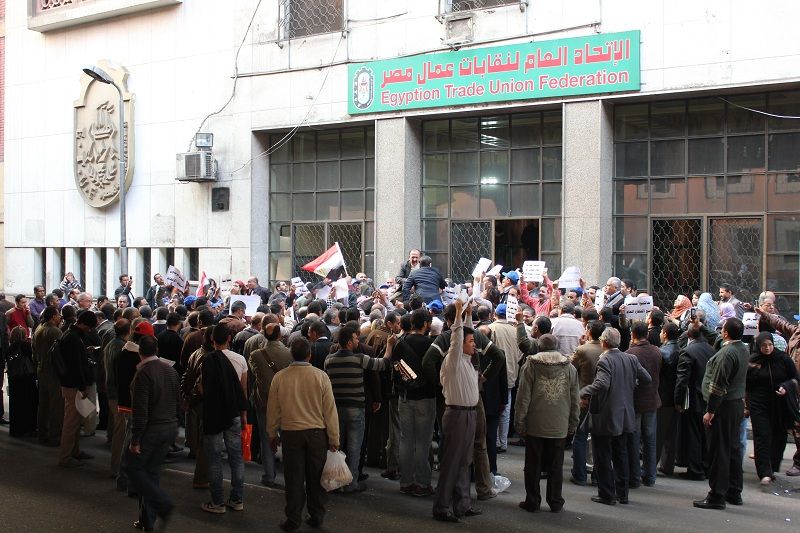 Independent unions strike outside ETUF in 2011

Egypt’s parliament extended the term of the state-controlled Egyptian Trade Union Federation’s (ETUF) board on Sunday by another year, despite elections already being more than five years overdue.

The last extension of the board’s term of office for a period of six months was approved by parliament in July 2016, with President Abdel Fattah al-Sisi previously extending its term by a year in May 2015.

The ETUF’s senior board members were selected and appointed by the minister of manpower in 2011, and current Minister of Manpower Mohamed Saafan is also a ETUF official.

The Trade Union Federation’s last elections were held in October and November 2006, although they were declared void by an administrative court, as they were conducted without judicial supervision. Despite the court verdicts, the leaders of the ETUF remained in office from 2006 to 2011.

With the outbreak of the 2011 revolution against President Hosni Mubarak, the ETUF’s board was dissolved, and a draft law was prepared under the caretaker minister of manpower to replace the outdated 1976 Trade Union Law, which stated that the only legally recognized labor federation in Egypt was the ETUF.

Parliament’s manpower committee, which is dominated by ETUF members, voted to retain the current leadership for 12 months, unless a new trade union law is issued during this time, which would mean elections could take place.

MP and leading ETUF member Mohamed Wahballah told the state-owned Al-Ahram newspaper that a draft trade union law, along with other labor legislation, is currently being discussed in parliament to encourage investment in Egypt.

“The extension of the ETUF’s term from six months to a year reveals that this governmental federation is merely working to keep itself in power for the longest period of time possible, without having to deal with votes or elections,” Talal Shokr, a member of the Independent Union of Pensioners, told Mada Masr, adding, “It is also striving to prepare a trade union law that maintains its privileges, and that sidelines independent unions.”

The ETUF was established in 1957, and acted as the country’s sole labor federation from that time until the advent of the first independent trade union in 2009.

In February 2016, the ETUF filed a lawsuit hoping to outlaw independent trade unions.

If the new legislation is passed, Shokr commented, Egypt will once again be blacklisted by the International Labor Organization. The ILO declared Egypt to be a state that violated international conventions on trade union rights for many years. In April 2016, the ILO called on Egypt to stop repressing independent unions and uphold workers’ rights to freedom of association.

The Egyptian state voluntarily ratified the ILO’s conventions on freedom of association (Convention 87) and the right to organize (Convention 98) in the 1950s, but has since failed to uphold its provisions.