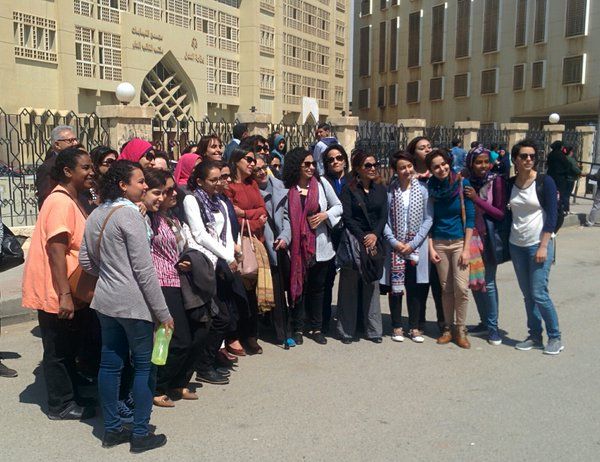 Outside the court with Mozn Hassan from Nazra - Courtesy: Ramy Raoof Twitter

The ministry accused the EU and UK governments of adopting a double standard, writing that they “call for the respect of the rule of law and the separation of power, when it comes in line with their interests and vision, while on other occasions they criticize judicial rulings and call upon the executive branch to intervene in its affairs when they don’t agree with them.”

The North Cairo Criminal Court issued a ruling on January 11, freezing the assets of Nazra for Feminist Studies and its executive director Mozn Hassan, and Mohamed Zarei and Atef Sayed Hafez, the president and director of the Arab Penal Reform Organization.

The ruling accused the defendants of spreading false information about the state and seeking to undermine its institutions. The accusations were based on reports by Egypt’s National Security Agency.

Both the EU and the UK described the decision as a restriction of freedom in their statements, issued on January 12 and 13 respectively.

In its response, Egypt affirmed its commitment to the enhancement of civil society as a crucial part of social and economic development. The ministry concluded by demanding the EU and UK pay attention to their own “flawed political and social internal affairs” and “leave Egypt to move forward on its steady path.”

Egypt has repeatedly come under local and international criticism for targeting NGOs and human rights defenders, and for a restrictive NGO law approved by Parliament in November, which is awaiting ratification by the president.

In September a chorus of statements from the United Nations, the US State Department and the European Union, along with several international human rights organizations, condemned similar asset freezes issued against five prominent Egyptian human rights defenders and three rights NGOs in the ongoing NGO foreign funding case.