اقرأها بالعربية
What happened to the social sciences in Egypt?
Academics lament a lack of investment in social sciences, associating it with the corporatization of education and restricted political environment

Ghadeer Ahmed is a graduate student at the American University in Cairo’s Department of Gender Studies. She is pursuing her education in the field as part of her professional development, after she started an initiative called “Girl’s Revolution,” an online feminist platform working toward a society free of gender-based discrimination.

When she started her degree in 2015, Ahmed had to invest all her savings — LE51,000 — to start off her coursework. When she applied for financial aid, she got a 20 percent cut on her total course fees of LE25,000 for that semester, an amount that could reach up to 50 percent before 2013.

Now, with the expected 30 percent surge in tuition costs, she is not sure how to continue, especially with the reduction in financial aid.

Out of around 50 graduate fellowship programs at AUC, only ten accept social sciences students; most of them are for education and law students. The rest of the fellowships are dedicated to degrees in science, engineering, economics as well as MBAs.

Social science encompasses disciplines related to the study of human society, everything from political science and anthropology to literature, history and archaeology.

“Sometimes a course will be canceled because registering students are too few and there isn’t enough money to pay the professor and the teaching assistants. This directly affects the quality of education we receive,” she adds.

No money for social sciences

AUC does not reveal information concerning spending on the research of specific fields within the university, but its Fact Book for the year 2016-2017 shows that the university heavily depends on grants to finance its graduate research.  The amount of total grants received by AUC declined between 2012 and 2016, however the percentage of research grants significantly improved in this period, despite a drop from 31 percent of the total grants in 2015 to 21 percent in 2016. 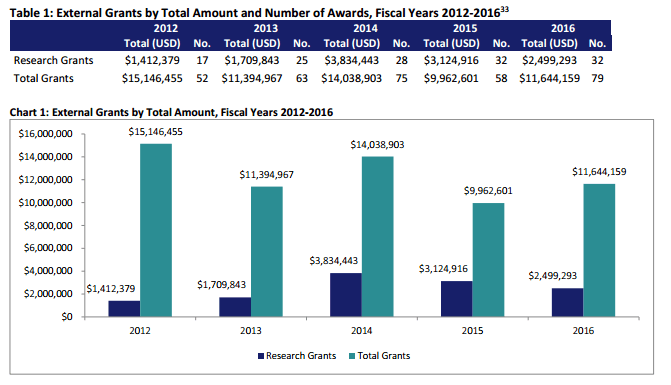 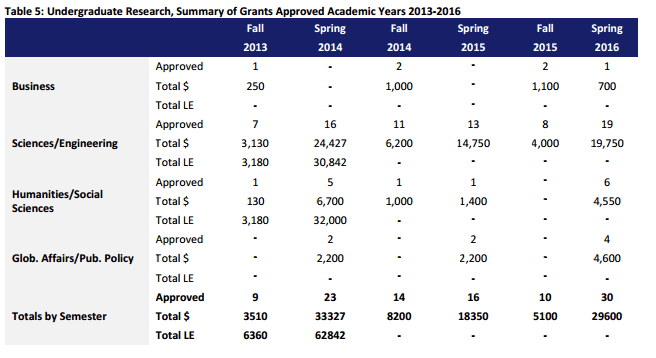 Dean of the Graduate School of Education at AUC Ted Purintan disagrees with the notion that Egypt’s financial situation will drive students away from social sciences. He thinks that all programs will be equally impacted, claiming, “we have a very impressive financial-aid system, we have fellowships for our students and we have funding and donors are filling that gap significantly. This will help sustain us, and I don’t envision that this crisis in the country will steer more people towards business and engineering more than there already are.”

Purintan asserts that AUC graduates from literature, and other non-scientific fields still become CEOs or policy advisers, adding “they are not less employable and in fact they make a lot of money.”

The money issue is not exclusive to AUC.

Ahmed Kheir is a master’s student in the newly established Gender and Development Program at Cairo University’s Faculty of Economics and Political Science (FEPS).

He explains that graduate study of social sciences in Egypt is costly, even in public universities. The tuition for his program is LE27,000 per year, which is relatively high compared to other departments within FEPS, where Kheir says the cost for graduate programs are around LE10,000 per year.

A previous report by Mada Masr has shown a surge in the cost of MA and PhD programs in public universities in all fields of study, with universities trying to look at graduate studies as a potential source of income.

Kheir adds that students tend to prefer market-oriented fields of graduate studies, rather than social sciences. “Compare the number of students enrolling in social sciences master’s programs and those applying for MBAs. Graduating seniors at faculties of commerce apply for MBAs before their graduation, because they promise better pay,” he says.

Kheir explains that a general lack of interest in social sciences leads to less quality research done in this field.

His claims are backed by a recent report issued by the Egyptian Science, Technology and Innovation Observatory, a government think tank affiliated with the Ministry of Higher Education and Scientific Research, tasked with presenting policy advice to the government on research issues.

While the report does not specifically refer to the exact amounts of funding spent on research in Egypt in different fields, it points out a notable lack of research focus on humanities and social sciences, compared to other areas like medicine, engineering and chemistry.

The report identifies a number of potential areas of research competencies in Egypt, most of them in medicine, science and engineering. It adds that Egypt has only one research competency in social sciences, namely in archaeology.

As for funding schemes, the report reveals that Egyptian researchers depend on government funding more than international donors. The report identifies two government-run institutions that offer funding for research in Egypt, including the Science, Technology and Development Fund (STDF) and the Academy of Scientific Research and Technology (ASRT), both under the auspices of the Ministry of Higher Education and Scientific Research and primarily focusing on funding science-related research.

While STDF directly funds research projects, ASRT is more concerned with funding innovation and the commercialization of research findings, according to the report. STDF’s biggest beneficiary is the National Research Center, focusing on agricultural and biological research, chemistry, engineering, scientific research and other related areas. In 2014, NRC received research funding worth LE225 million. 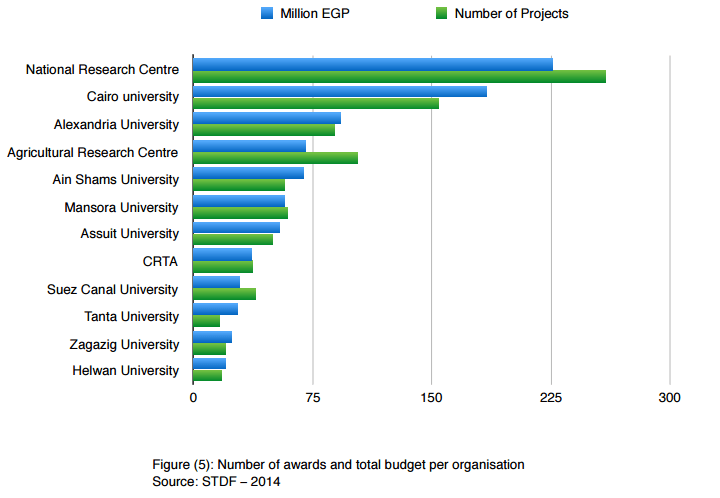 The politics of social sciences

Hoda al-Sadda, professor of English literature at Cairo University, tells Mada Masr that Egypt is being affected by a global trend of corporatizing education, whereby education is not considered a means for intellectual development, but is rather tied to market needs.

“The effect of this trend is more severe in Egypt because education’s conditions are already worsening,” she says.

In an article she wrote titled “Neoliberalism and the attack on universities,” Sadda argues that the Egyptian state’s role in supporting education has dwindled since the 1990s, when steps were taken to further privatize education. In 1992, a law was passed enabling the building of private universities that Sadda referred to as “investment projects.” In 2002, another law was passed to allow for the licensing of private foreign universities.

“Universities cannot be a profit-oriented project, but they are essentially a national project,” she asserts.

In a conversation with Mada Masr, Sadda warns that social sciences bearing the brunt of these policies means a closure of much-needed spaces for critical thinking that can challenge the corporatization of education in the first place, stating: “If all students are studying business or sciences, not social sciences, it will be difficult to see cultural critics who challenge the dominant status quo.”

But the corporatization of education on university campuses is not an inward university-specific tendency. It is a broader political issue.

After the tortured body of Italian PhD student Guilio Regeni was found on a highway near Cairo in January of last year, evidence that he could have been targeted by Egypt’s security apparatus continued to emerge. While the truth behind his murder remains uncertain, the prospect that he might have been a target for his research activities sent shock waves through the academic community. He was researching labor organization in Egypt.

When we talk about threats against academic research, we are directly talking about political threats against research in disciplines like history, philosophy and literature, more than scientific studies

“Normally, the weight of departments like business or economics is much bigger than social sciences, but this is tied with the general environment,” says Reem Saad, an associate professor of anthropology at AUC.

She points to a political environment that is not open for critical research in social sciences at large. For example, she cites an amendment in the Penal Code in 2014 that made penalties on the receipt of foreign funding more severe, restricting funding for social science research in the country.

According to Saad, “funding is very important to research. This amendment was tailored to target human rights organizations, but it also affects research. This will affect anyone wanting to conduct serious and critical research in the social sciences.”

Sadda agrees, adding that academic freedoms and work in the field of social sciences become easily affected when political and civil rights are suppressed.

“When we talk about threats against academic research, we are directly talking about political threats against research in disciplines like history, philosophy and literature, more than scientific studies. The public sphere is getting narrower, and universities are a microcosm of society,” she says.

A closed public sphere also affects the possibility of pursuing research, and particularly fieldwork. The study of social science is the study of controversial issues, says Kheir. “There are huge restrictions on academic research. The space to move and conduct research, especially when the researcher is required to follow their subjects closely, is very limited and difficult,” he says.

Sadda explains that other than being a vehicle for intellectual progression, the study of social sciences is important in fostering national development.

“Social sciences are important for providing knowledge in different development areas, either directly or indirectly. Social research in these fields is important to offer policy advice for the government in fields of education, development, economy, among other fields,” she says. “Studying social science is not a matter of luxury.”

This article is published in collaboration with Al-Fanar Media

Note: This article has been edited to include statements from Ted Purintan

AD
You Might Have Missed
What we talk about when we talk about trees
Where do old lesbians go to die?
Carbon Colonies & A Green New Deal
Mugamma revisited: Reimagining the building and the square
AD
Mai Shams El-Din
161 articles on Mada