Three takes on Mawlana: A timely film that plays it safe 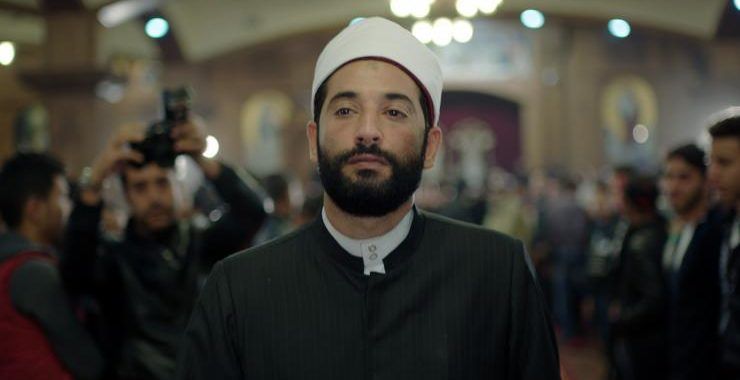 Three of our writers give their thoughts on Magdy Ahmed Aly’s new film Mawlana (The Preacher), which premiered at Dubai International Film Festival in December and is currently screening in Egyptian cinemas.

At the start of Mawlana, Hatem (Amr Saad) is a modest, low-profile imam who unexpectedly gets to fill in for an A-list guest on a TV talk show. He asks where he can leave his bag before going on air, and the producer fussing over him asks whether it contains any valuables. “327 pounds and a can of 7Up,” Hatem answers, clutching it close to his chest as though it contains the world’s most precious treasures. The bag is pried away from his hands with a joke as they rush toward the stage, and at the sudden burst of light Hatem flinches and turns away, shielding his eyes. The frame goes still and the film’s title comes up in neat, elegant calligraphy. It is a beautiful set-up for the film’s ensuring conflict, but unfortunately the rest doesn’t live up to it.

Hatem’s rise to celebrity preacher is depicted in a fast-paced montage as a prologue to the main story. He marries the beautiful, supportive Omaima (Dorra), and finally has a boy with her after seven years of trying. The three of them live together in a sprawling suburban mansion, and we find out that the source of their apparent wealth is his very own TV show, followed by millions across the country. The plot begins to thicken when Hatem is introduced to the president’s son, Galal (a clear reference to Gamal Mubarak), who asks for help with a pressing family matter: his brother-in-law, Hassan (Ahmed Magdy), has decided to convert to Christianity, and they need someone to “bring him back to his senses.”

What follows is an intricate reflection on the interplay of politics and religion, and the vicious power struggles involved. Presumably, the film — based on a novel of the same name by journalist and TV presenter Ibrahim Eissa (the English translation, published by the AUC Press, is titled The Televangelist) — is intended to portray the disintegration of Hatem’s moral code and family life as a result the corrupt system whereby the nation’s so-called spiritual leaders are manipulated to serve the interests of the state. Yet its heavy-handed approach ruins what could have been a nuanced study of this convoluted relationship.

Not only does The Preacher become too direct, and reduce complicated points of contention in Islamic thought to easily digestible capsules (the dialogue is written by Eissa), but the film’s multiple subplots are scattered and the screenplay fails to tie them together. For instance, much screen-time is given to Hatem’s overprotectiveness of his son at the beginning of the film, yet when the boy has an accident, the effect on Hatem and his marriage seems detached from other developments, to the extent that this entire storyline could be discarded and it would make no difference.

Obviously, with his inner turmoil and big players following his every move, Hatem has a lot at stake. But somehow he manages to do the right thing and come out intact, rendering his journey meaningless in dramatic terms. Sure, he is met with difficult situations, yet even when he falters he never fully fails himself, nor does he really pay for his misjudgments. By playing it safe, the story loses its resonance. Its statement, however, rings loud and clear: it is a direct condemnation of the state’s policy of collaborating with fundamentalist Islamic forces to cement its power, creating a fertile ground for extremism and sectarian violence. At a time when the government is often praised, despite its atrocities, for ridding the country of Islamist rule, this is a refreshing angle from which to view the bigger picture, even it is set in a pre-revolution Egypt.

The Preacher is a film with a timely and important message. Unfortunately it delivers this at the expense of the depth of its characters and any storytelling subtlety.

What’s most frustrating about Mawlana, a film based on a bestselling novel by prominent journalist Ibrahim Eissa, who sways between supporting and opposing the state, is that it had potential to be hard-hitting film, but simply fell short.

The fragmented storyline, which follows fictional popular religious preacher Hatem (played gracefully, in spite of the script’s limitations, by Amr Saad), is set during the Hosni Mubarak era — although no names of actual politicians or religious figures are used. The film starts with the preacher, an employee of the Ministry of Religious Endowments, rising to fame through a TV show in which he preaches a modern take on religion, moving away from the harsh hate speech of other preachers.

Things get complicated when the ruler’s son, Galal, asks him to step in to convince his brother-in-law to return to Islam, as the ruling elite fears angering the religious men they count on to keep society in check. Hatem then struggles to maintain his integrity due to pressure to become another state mouthpiece.

Mawlana does have some daring points to make about the relationship between the state and religion. It also opens the floor for questioning the integrity of religious preachers, a pressing issue in Egypt and the region. And the fact that the film doesn’t fall into the trap of blaming all of Egypt’s problems on the Muslim Brotherhood, instead pointing a direct finger at the state and ruling elite’s role in the rise of religious fundamentalism, is a real triumph that should be applauded.

But its endless preachy monologues take away from the cinematic experience, and the events — in Hatem’s personal life and in his political struggle — happen without much indication of their significance for the storyline, their impact on the largely flat characters, or their relevance to the film’s underlying message. The shallow treatment of the script, along with unnecessary comedy interludes, make the film unconvincing, and it becomes challenging to take its core ideas seriously as a result.

Mawlana is a big film produced by a big company (El Adl Group), directed by a big director and based on a big novel by a big writer, journalist and TV host, but by the end I got the feeling that all these guys are medium-sized fishes in a tiny pond. It’s quite sad to see a movie that presents itself as sharply critical on so many sensitive topics in Egypt ultimately give the mildest possible statement on each of them.

The corruption of the Egyptian media, the official religious institutions’ hypocrisy, police brutality, the state’s fear-mongering role, ignorance and sectarian strife are the demons with which the script surrounds its protagonist. After going through a long story that has a lot of potential, that protagonist reacts to all these demons with a cynical, hopeless and condescending attitude that appears to be nothing more than a personal apology from the writer for his own similarly acrobatic relationship with culture, politics and the public in reality.

The famous, witty, beloved and slightly cunning sheikh, Hatem, is in many ways strongly reminiscent of Mustafa Khalaf in Atef al-Tayeb’s 1992 film Dud al-Hakuma (Against the Government). But Khalaf actually goes against the government, sues it and challenges it. The famous speech scene at the end — by which the finale of Mawlana seems to be inspired — is more than a speech. It’s an act of resistance in speech form. Many other things are much better in Against the Government as well. The plot actually develops organically, and its realism results in real surprises — the characters’ backgrounds, weaknesses and transformations make sense and aren’t just added to tick boxes of what movies are usually made of. Tayeb’s economical, emotions-focused direction contrasts with Aly’s constant reminders of his presence, reflected in meaningless camera movements and cuts that add nothing to the story but nausea and make the movie feel insecure about what’s happening on screen.

The first 20 minutes of Mawlana promise an interesting exploration of the world of fame, deception and power that shapes Egypt as we know it, an opportunity that’s wasted on too many political and artistic compromises that make the movie a perfect reflection of what’s allowed in Egypt right now. It’s a big scared film in a small country that’s run by guys who are scared of everything.

I think of culture as a cloud that forms itself above human beings and the ways they interact with each other and their surroundings. The more varied and rich human life is on a certain spot on earth, the more interesting and colorful the cloud will be. The more curious and brave the people underneath the cloud are, the bigger and greater the cloud gets, stretching out very far ahead of the humans carrying their artistic metaphors and enigmatically coded questions about their surroundings across languages and local references to many more humans everywhere.

Good artworks — in my opinion — exist on the very edge of that cloud, exploring new territories, challenging norms, putting us in new experiences and facing us with hard questions or feelings that aren’t necessarily comfortable. By examining the nature of the works that are considered — by the audience or just the makers — to be on the edge of the cloud, you can easily see the cloud’s size above a certain society, and that can be very reflective of how that society sees the world, how vulnerable that society is, what scares it and why. Mawlana is a good indicator of how tiny Egypt’s cultural cloud is right now.

Topics
Related
cinema
Dubai Film Festival celebrates the margins of Egyptian cinema
Hossam Helaly | The Dubai festival seems to be helping Egyptian cinema overcome its artistic slump
film reviews
Three takes on Like a Matchstick, a comic critique of Egyptian cinema’s ‘golden age’
Rowan El Shimi | Nostalgia is not evoked through the usual sentiments of melancholy and loss, but through critique and
Ahmed Zaki
Egypt’s cinematic gems: ‘Against the Government’
Andeel | “We are all corrupt, no exceptions, even with helpless silence, we are corrupt.”
Dostour newspaper
Ibrahim Eissa is “The Boss,” but at what cost?
Heba Afify | On the set of Ibrahim Eissa’s new show “El Boss,” everyone refers to the celebrity journalist as