Teaching Egyptians to read ancient plants: Pioneering the field of archaeobotany in Egypt

Sherief Abdellatif Elshafaey Attia sits alone in a lab surrounded by cupboards filled with desiccated plants in the herbarium at Helwan University’s Department of Botany and Microbiology. He is currently the only Egyptian botanist in Egypt who examines millennia-old plant remains to understand the ancient Egyptian environment, its diets and food economies.

“Archaeological science is not a common field here,” Elshafaey tells me, “so you will face a lot of problems if you want to study botany and archaeological plant remains.” Mennat-Allah El Dorry, an archaeobotanist at the Ministry of Antiquities’ Scientific Office, agrees: The separation of sciences and archaeology at Egyptian universities is one reason why Elshafaey is the only Egyptian taxonomist doing archaeobotany.

It’s not just archaeobotany. Archaeological science — the application of chemical and physical sciences to ancient materials — is struggling to gain traction in general. But Dorry and Elshafaey hope this will change.


As Dorry explains, university students are either in the humanities or the sciences, and archaeology is considered a humanities field. This creates a drastic divide between archaeology and science. “So what happens is, archaeological sciences are not in any way taught in the Faculty of Archaeology, with the exception of conservation,” according to Dorry.

The study of ancient plant remains allows archaeologists to “dig very deep into ancient lives and environments by allowing an understanding of the very basic needs of humans,” Dorry explains. Archaeobotanists shift through soils and sands for macro-botanical remains — minute traces of plants, like seeds and fibers, that are desiccated or charred — and analyze them under a microscope. 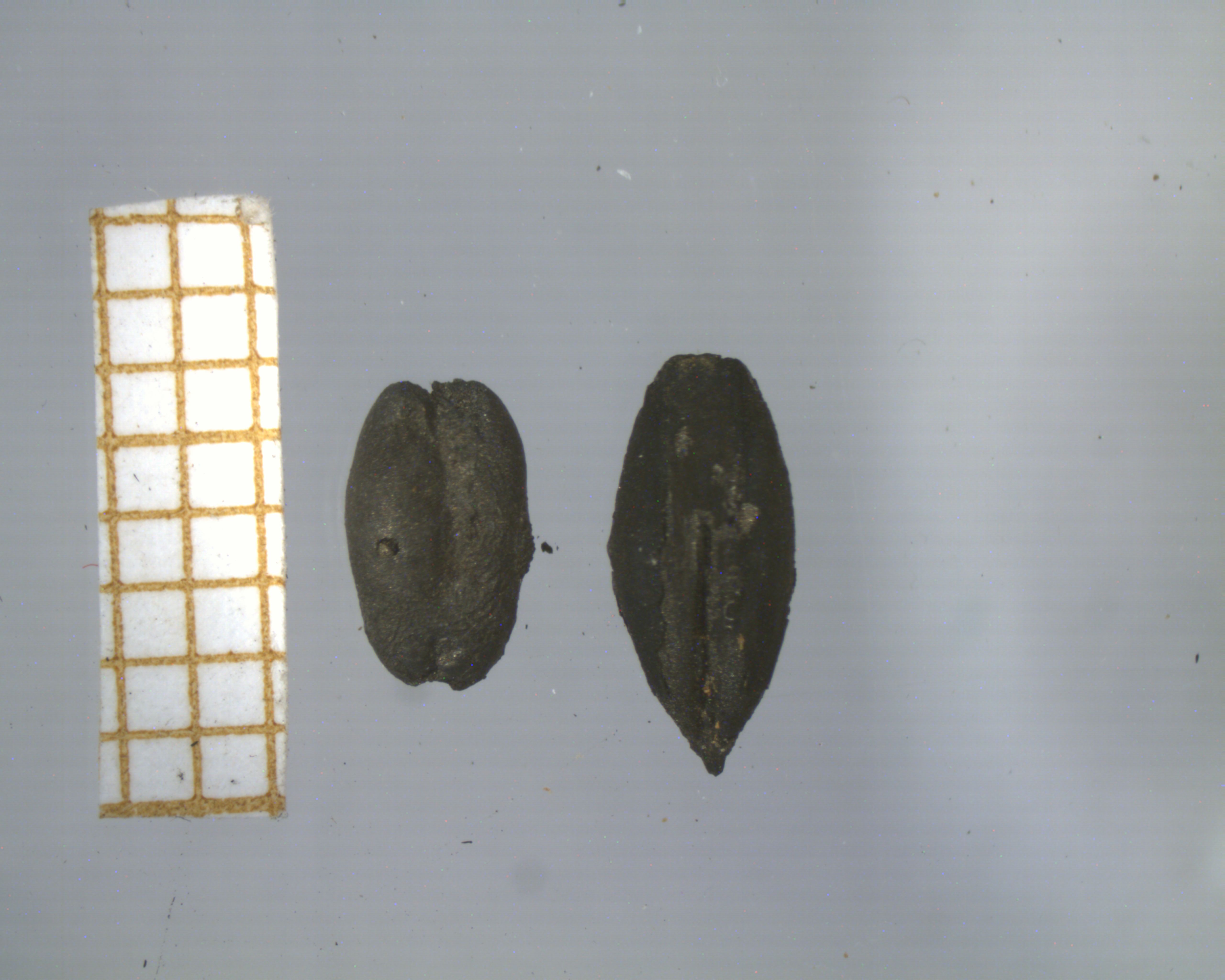 Yet identifying plant species from such decayed fragments is only possible if archaeobotanists have a strong background in botany, and particularly taxonomy — the classification of plant species. Without access to the physical sciences, archaeology students are cut off from the tools required to address complex issues of ancient environment and health.

Botany undergraduates are similarly restricted, according to Elshafaey. Their only opportunity to learn about ancient plants and how they were used is in their fourth-year flora class, where — depending on the professor — one or two lectures might be devoted to archaeobotany. There are currently no options to pursue archaeobotany in the faculty of biology. But this wasn’t always the case.

Elshafaey would not have been able to work in archaeobotany without his former advisor, the late Ahmed Gamal-Eddin Fahmy of Helwan University. Fahmy, who studied botany at Cairo University and received his PhD from Göttingen University in Germany in 1995, first brought archaeobotany to the department as part of the plant taxonomy program. This enabled him to train some younger biologists to study ancient plants, including Elshafaey and Adel Moustafa Ahmed, who is completing his PhD in archaeobotany at the University of Vienna, Austria. 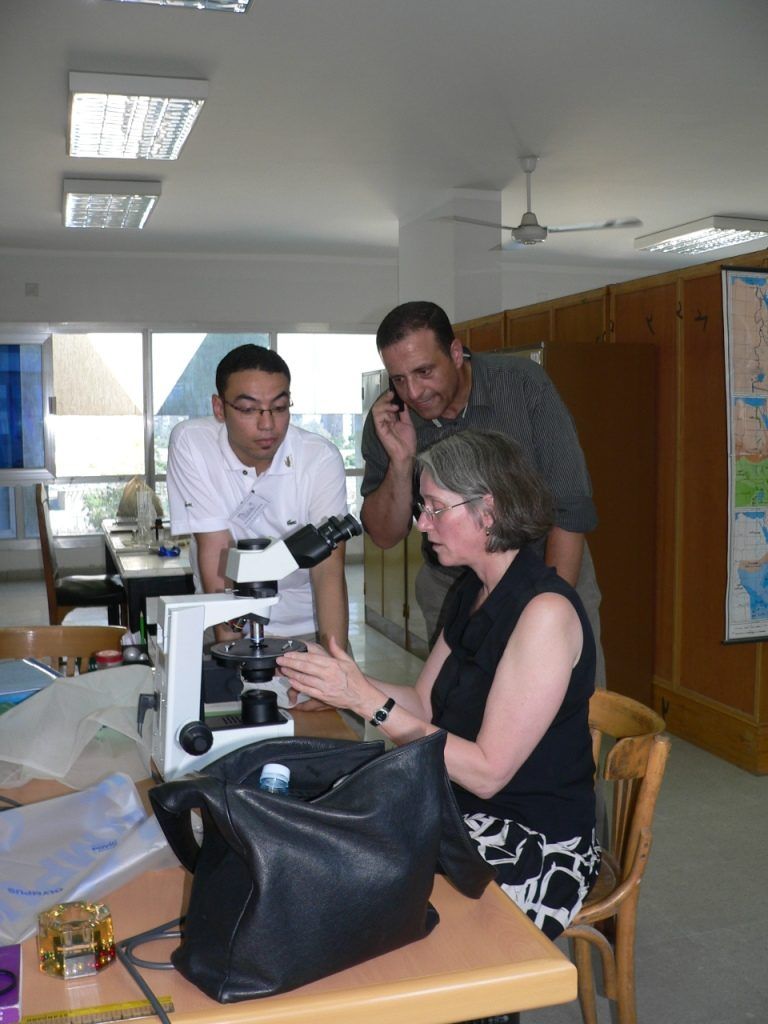 Fahmy, who lost a battle to cancer in 2013 at the age of 51, worked tirelessly to establish the herbarium and associated archaeobotany lab at Helwan University. It eventually happened in 2006, utilizing grants from the American National Science Foundation and the Egyptian Science and Technology Development Fund. Today, the herbarium has a library and several advanced microscopes, as well as computers and software programs, for analyzing macro and micro plant remains. There are also more than 10,000 samples of modern Egyptian plants in the herbarium’s reference collection, compiled and studied by Fahmy and his graduate students.

Fahmy had big plans for archaeobotany in Egypt. “Professor Fahmy planned to make a program for archaeobotany in the biology department and he wrote a full proposal with a complete course,” says Elshafaey. “He wanted to deliver it to the president of the university, but unfortunately he died before he could.”

Now the once bustling lab is now practically empty, with Elshafaey singlehandedly attempting to keep archaeobotany alive at Helwan University. He works essentially alone in the lab researching ancient plants from archaeological sites across Egypt for his PhD. 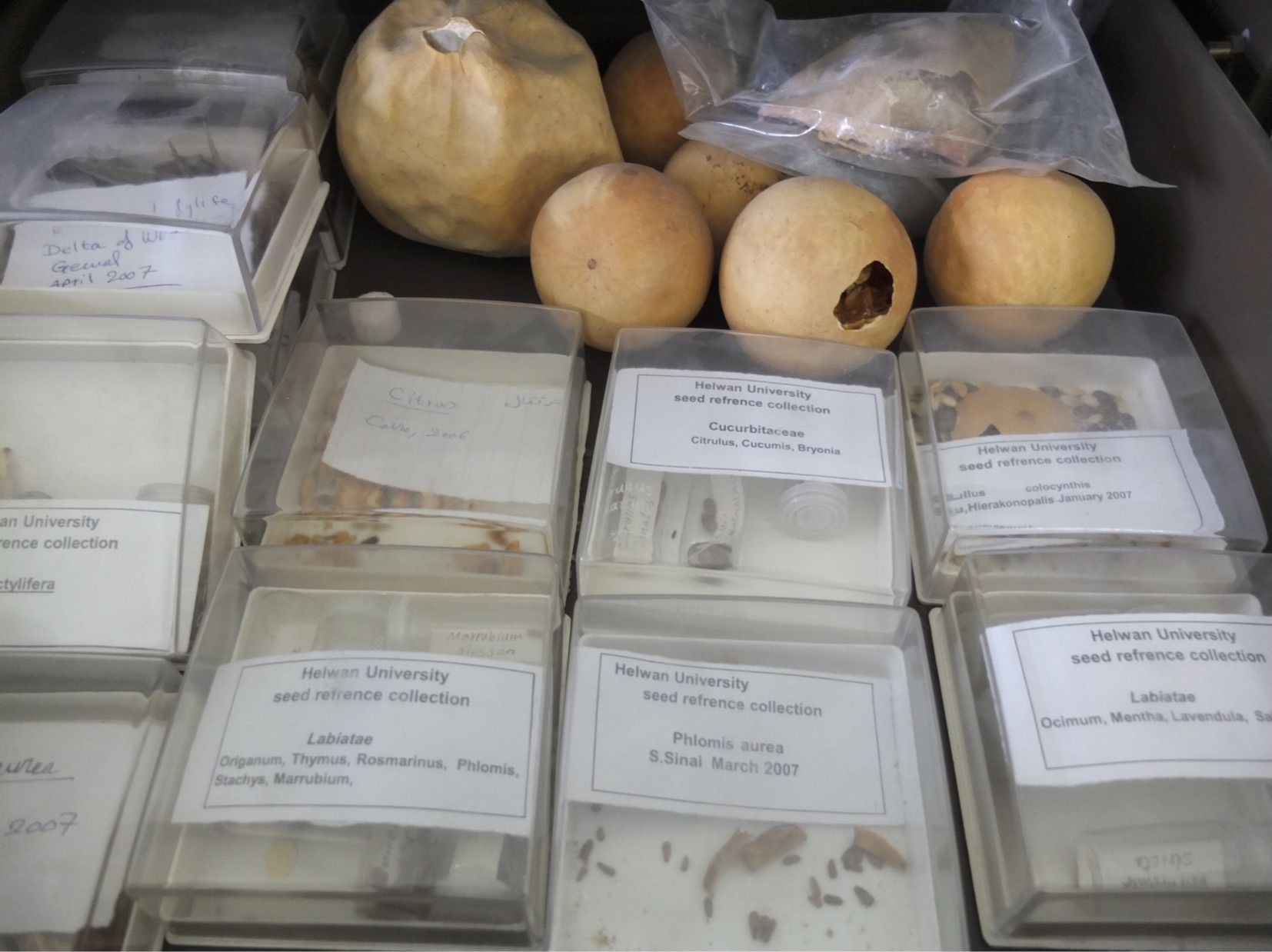 As a teaching assistant, Elshafaey also teaches the fourth-year flora course and dedicates several classes to archaeobotany, specifically theoretical issues related to how humans interacted with plants and their environment. He has also introduced a practical component, whereby between 20 and 30 students examine the herbarium’s small collection of ancient plant remains.

Elshafaey remembers Fahmy as a dedicated scholar and mentor, who “in his heart and soul was a committed botanist and archaeobotanist.” He wants to complete his mentor’s work by creating the research and teaching program at Helwan University. Without having completed his PhD, however, Elshafaey’s ability to enact change within the university is still limited.

“I need to expand this science in Egypt, but we need another professor like Fahmy to expand archaeobotany again,” he says. “Egypt is so important – we need a good reference collection in Egypt and Egypt deserves a good archaeobotanist.”

When botany students study the small archaeological sample collection at the Herbarium, Elshafaey says, they “say, ‘wow!’ and are amazed to see charred material, charred barley and grains.” Yet they only get to see a fraction of the full spectrum of ancient plant species in their varying states of preservation.

Elshafaey and Dorry agree that one of the biggest challenges in archaeobotany education – beyond not having a department that sanctions archaeobotany – is the lack of a comprehensive ancient plants reference collection in Egypt.

“Archaeobotany is not easy,” says Dorry. “You really need to know a lot of taxa and need to understand the taphonomy [knowledge of fossilization processes], or what happens to the plants.” Students need regular access to extensive reference collections of ancient and modern plants in order to learn how to identify remains.

“We were living in the reference collection,” recalls Dorry of her masters degree in archaeobotany at University College London. “It was a very important part of our training. We would look at seeds under the microscope and draw them, paying attention to the morphology, so we would learn how to read a seed.”

The only archaeological plants reference collections in Egypt, according to Dorry and Elshafaey, are the modest one at the Institut français d’archéologie orientale (IFAO) and the Cairo University one, which is inaccessible to outside researchers. So for Elshafaey’s students, the IFAO is the only place to gain hands-on experience with ancient plants and he regularly takes small groups of students to examine its collection.

The lack of reference collections of ancient plants in universities is due to the lack of active archaeobotany research in these institutions. As Dorry explains, the Ministry of Antiquities needs to approve the transfer of any archaeological sample from its site to a certifiable lab in a complex process that can take a significant amount of time. Elshafaey says Fahmy was able to transfer some samples to the Helwan University lab, as it is an approved facility. “But the situation changed after the death of Prof. Fahmy,” he adds, and archaeobotanical research declined.

Dorry suggests that to build reference collections, a cooperation between different excavations in Egypt to send samples to labs in Egypt is needed. She herself is heading up the new archaeobotany lab at the Ministry of Antiquities’ National Museum of Egyptian Civilizations, set to open in Cairo’s Fustat district in 2017, where she will develop a full reference collection, carry out analyses, and train Ministry of Antiquities inspectors.

Creating a culture of archaeobotany

The importance of archaeobotany and its research potential must be recognized before change can occur. Elshafaey and Dorry are working towards this goal by giving lectures and training courses to students at other universities, and to inspectors in the Ministry of Antiquities.

These inspectors are crucial figures in Egyptology. According to Dorry, they carry out numerous tasks, including monitoring archaeological sites, working with foreign missions to ensure they stick to their contract with the ministry, carry out rescue and salvage excavation, and deal with bureaucracy. Almost all are graduates of faculties of archaeology, and as such many have not been exposed to archaeobotany or indeed any archaeological science.

Unlike other artifacts, ancient plants are mixed into soil and are not immediately visible during an excavation, explains Dorry, which is why archaeologists need to be trained in soil sampling techniques to recover them. Dorry trains inspectors because she wants to introduce them to the importance of sampling and the kinds of questions enabled by archaeobotany. This gives them a more complete picture of archaeology and enables them to collect samples on their excavations for future archaeobotanical studies.

Since 2014, Elshafaey has helped teach an IFAO training program for inspectors and archaeology graduate students from universities all over Egypt, aimed at providing instruction on a wide range of topics. 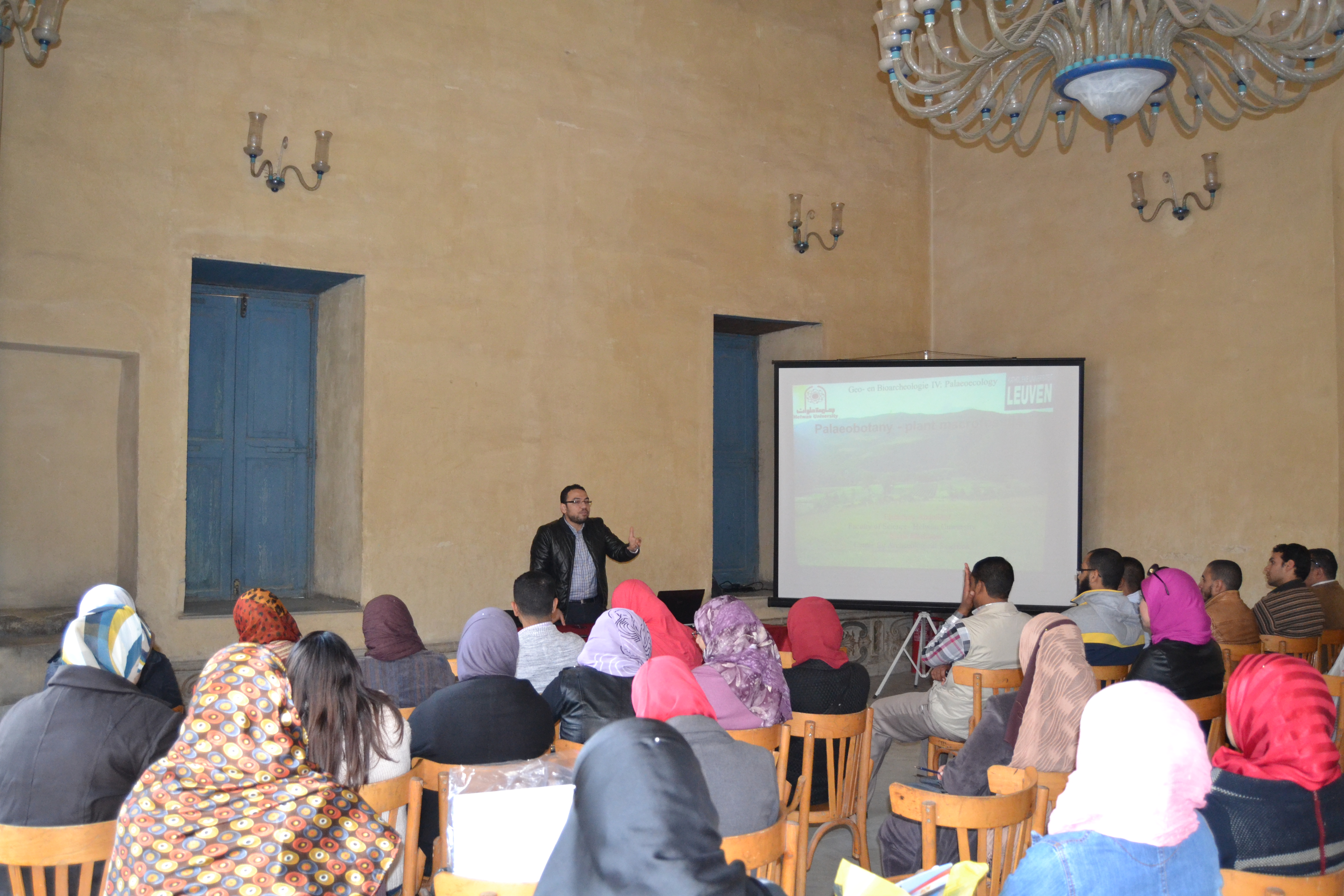 During the intense two-week course, trainees receive “basic training in all techniques used during archaeological excavation, such as excavation, stratigraphy, surveying, photography and drawing, as well as related studies including pottery, archaezoology, archaeobotany and physical anthropology,” explains Belgian Egyptologist Laurent Bavay, director of the IFAO. They spend two more weeks working on one of the 30 IFAO excavations in Egypt, he says.

Anita Quiles, director of IFAO’S archaeometry lab, says Elshafaey’s courses are “an excellent opportunity for trainees to have a precise and cutting-edge overview of how to lead an archaeobotanic study.”

“A majority of the inspectors do not have any idea about plants at first,” Elshafaey says, so he starts his classes by introducing plants and plant systems, before discussing archaeobotany and showing examples from the IFAO’s ancient plant reference collection. “A lot of inspectors are interested in doing a masters or a PhD, but they don’t have topics for their thesis. If I can teach archaeobotany, it can open their minds to another field.

Dorry reports the biggest hurdle for archaeobotany in Egypt is the misconception that there are no career options in it. That’s simply not true, she says: “So many field projects need archaeobotanists, and there are not enough to go around.”

This is the second in a series on Egyptology, archaeology and heritage management in Egypt. See the series introduction here.

AD
You Might Have Missed
Mugamma revisited: Reimagining the building and the square
Carbon Colonies & A Green New Deal
What we talk about when we talk about trees
Where do old lesbians go to die?
AD
Meredith Brand
6 articles on Mada

Topics
Related
cultural heritage
Keeping track of the artifacts: On the Egyptian Museum’s Registration, Collections Management and Documentation Department
Meredith Brand | A look at the Egyptian Museum’s remarkable Registration, Collections Management and Documentation Department.
archaeology
Introducing a series on Egyptology, archaeology and heritage management in Egypt
Meredith Brand | Neglect and mismanagement are accusations that permeate any discussion of Egypt’s cultural heritage.
Ancient Egypt
Hatshepsut, Cleopatra and the women who ruled Egypt
Jano Charbel | While the image of the Ancient Egyptian matriarchal ruler is often condensed in the persona of Cleopatra,
Antiquities Ministry
How the discovery in King Tut’s tomb is changing the field of Egyptology
Meredith Brand | Part 2 of Meredith Brand's article on what the recent scan results tell us about ancient Egypt and Egyptology