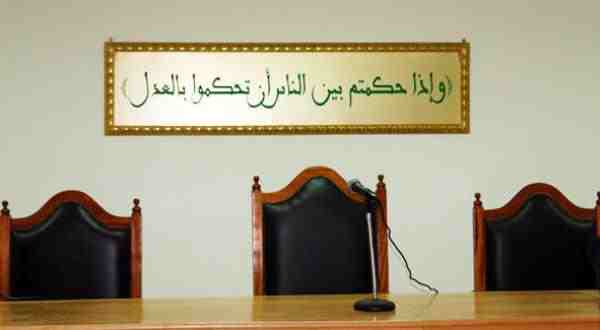 By
Mostafa Mohie and Rana Mamdouh

A bag stuffed with millions in Egyptian pounds, euros, other foreign currency and gold jewelry seemingly brought a corruption scandal to the doorstep of Egypt’s State Council. However, while the LE24 million, US$4 million, 2 million euros and 1 million Saudi riyals discovered by the Administrative Control Authority in a raid of State Council employee Ahmed Gamal al-Labban’s personal residence on December 28 hint at bribery, the case is one in a string of events that point to a larger tug of war in which the executive authority’s consolidation of power is at stake.

The wider timeline is dotted by a series of seemingly disparate occurrences, including the legal proceedings in the transfer of Tiran and Sanafir islands, proposed amendments to the law governing appointments to head judicial authorities and a grab for power cloaked in the garb of an anti-corruption campaign. By sketching out this brief history, we hope to show how these events have cross-pollinated one another, as much as their possible implications for the future brokering of power internal to the Egyptian state.

Labban worked as the director of the State Council’s purchasing department, which handles the provision of paper, ink and computers as much as the allocation of the council’s court premises. He is related to Judge Gamal al-Labban, who served as head of the State Council between 1994 and 1997.

Following the Administrative Control Authority’s December 28 raid of Labban’s house that uncovered what has been portrayed as bribery money, a meeting was held between the head of the State Council Judge Mohamed Massoud, six of the council’s most senior judges and members of the control authority to decide how to handle the matter. A deputy to Massoud who spoke to Mada Masr on the condition of anonymity says that the Administrative Control Authority representatives requested Labban’s employment file and provided assurance that no other employee or judge had been implicated in the case.

Several State Council judges and administrative employees anonymously confirm that Labban was known for trading money, that anyone who needed hard currency would approach him.

“I knew that he was the owner of an exchange company, and I have sold him larges sums of US dollars,” says the deputy. “He worked at a currency exchange office until 1998. Then he and his brothers established their own company.”

The deputy says that the Administrative Control Authority was unaware of Labban’s currency trade before it began monitoring his movements three months ago upon receiving complaints from his colleagues that he had received a bribe of LE150,000.

The deputy refutes claims published in the press that the bribes were related to the bids for setting up council premises. “This is completely untrue,” he says. “This kind of work is the responsibility of the Armed Forces Engineering Authority.”

Despite the assurances of Administrative Control Authority representatives in that initial meeting, the State Security Prosecution opened an investigation into State Council General Secretary Judge Wael Shalaby, connecting him to corruption in securing provision to the council’s premises. A day after Shalaby tendered his resignation and thereby had his judicial immunity lifted, he was arrested. However, only hours later he was found dead in his cell, and judicial sources reported that he committed suicide.

The public prosecutor quickly moved to issue a gag order in the bribery case.

On December 28, the same day Labban’s residence was searched and only a few kilometers away, board representatives from different judicial bodies met at the Judges Club to discuss ways to challenge a controversial draft law. The legislation marshaled amendments that would grant Egypt’s president greater power in deciding who will lead Egypt’s judicial bodies, by giving the presidential office the power to make an appointment from a list of nominees prepared by the Supreme Judicial Council. This would replace the current appointment process where the longest tenured judge is appointed to head each judicial body.

The State Council Judges Club issued a statement on the same day, announcing that it rejects the draft law and calling it a “suspicious” measure that includes dangerous violations of the Constitution. The draft law constitutes, the statement asserted, an “extremely serious attack” on the independence of the judiciary.

With the revelation of corruption internal to its operations, the State Council issued a second statement on December 29 detailing its relation to Labban and underling that he was an administrative employee and not a member invested with judicial authority. The court already seemed attuned to questions that were beginning to circulate that aligned the timing of the corruption scandal with the draft law, as it distanced itself from the procurement director. The money found in Labban’s residence, the statement asserted, was his responsibility, and the burden rests with him to provide evidence of its source, rather than with the council.

Suspicion that the state had instrumentalized corruption to target the State Council centers on Judge Yehia Dakroury. According to the principle of seniority currently governing judicial appointments, as of July this year, Dakroury will ascend to the head of the council and be the supreme judge on the Supreme Administrative Court, the appellate court of the State Council. Dakroury positioned himself as a figure willing to break with the government’s official position, when, in June in his current position as the head of the Court of Administrative Justice, he annulled the agreement to transfer sovereignty over Tiran and Sanafir islands to the Saudi Arabia, which was signed in April of last year. If the current appointment process is amended, the state would be in a position to prevent Dakroury from assuming a leadership rule.

In his initial remarks concerning the bribery case at a public event on December 28, President Abdel Fattah al-Sisi tried to move attention away from these rumors, affirming that the case is not targeting the institution. “A breach by any employee in any institution does not blemish the whole institution,” Sisi said. “Please, when we hold anyone working at any institution accountable for a mistake, it does not mean that the institution is to blame. This is not right. All the state’s institutions are respectable.”

A member of the State Council’s financial and administrative affairs committee who spoke to Mada Masr on the condition of anonymity reiterates the council’s distance from Labban.

“Our relation with the bribed employee was terminated with the issuance of the press release,” the member says. “Our opposition to the amendment of the law governing appointments to head judicial bodies has not changed. Further, the draft law containing the amendments has still not been officially presented to the State Council.”

However, member of Parliament Ahmed Helmy al-Sherif, who submitted the draft law, counters that Parliament’s legislative committee sent the amendments to judicial bodies last week. “They have eight days starting today [December 28] to respond, so that the committee can discuss the draft.”

Professor of constitutional law Shawky al-Sayed expresses concern about the correlation between the two events. “Why this amendment? Why now? The proposal should have been presented to the judicial bodies before being discussed in Parliament.”

Sayed notes that the principle of seniority has long been a normal feature of the appointment of judges. While he acknowledges that there are legitimate critiques of a process which may lead to the selection of individuals who do not have the necessary experience or may burden some with responsibilities beyond what they can manage, it does not mean that the discriminating party must be housed in the executive branch. “The general assembly [of the concerned court] could be the body responsible for choosing the respective head of each authority, rather than the head of state,” Sayed says. “The general assembly is the most qualified to choose the head of the judicial body based on efficiency.”

Sayed also questions the criteria upon which the president would choose the heads of judicial bodies and how close those nominated would be to the state’s official position.

Judge Tarek al-Beshry tells Mada Masr that the amendment is “unacceptable, as, according to the 2014 Constitution, the president heads the executive authority, which should not have a say in the choice of heads of judicial bodies. The proposed revisions would violate the principle of the independence of the judicial authority and contradicts constitutional safeguards of its independence.”

The proposed amendment is the most significant disagreement between the judiciary and the political authority since the June 30, 2013 regime change that brought the military-backed government to power.

Topics
Related
corruption charges
Judge implicated in corruption case found dead in prison cell
Former State Council Secretary General Wael Shalaby was found dead in his prison cell after being implicated
corruption
Transparency International corrects PM and states corruption in Egypt has worsened
The global watchdog states that the country's corruption score has actually worsened, despite its movement
Central Auditing Authority
The saga surrounding Egypt’s top auditor explained
As the chief of an organization tasked with monitoring the performance of other government entities,