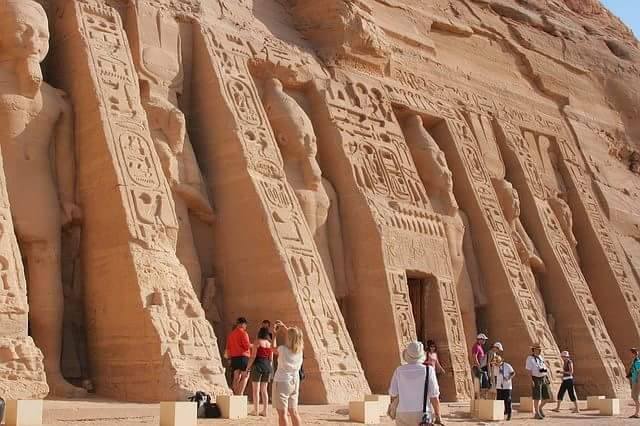 The first Israeli tour group to travel through Egypt in 18 months arrived in the country earlier this week, reflecting a warming of relations between the two states. However neither the exact number of tourists nor the date of their arrival has been officially disclosed.

According to a post on the Facebook page of Israel’s Embassy in Egypt , shared on Tuesday, the tour group arrived in Cairo International Airport, and has been travelling around the country accompanied by armed escorts and security convoys organized by Egypt’s Interior Ministry.

The post adds that, “the Egyptian Interior Ministry has gone to extraordinary lengths to prevent any disruption,” particularly considering Israeli visits to Egypt have become increasingly rare. According to the statement the group trip was booked through Israeli travel company Ayala, “despite the serious warnings issued by several states” against traveling to Egypt.

A police captain, who was part of the security convoy, is quoted as saying to the group: “I will be sacked from my job if anything happens to a single hair on your head.”

Israeli journalist, Smadar Perry is also quoted as saying “over the course of hundreds of kilometers, Israeli tourists have not been confronted with any form of hostility, even when publicly announcing that they are Israeli citizens.”

The embassy’s Facebook page asserts that “except for holders of official posts, or travelers who slalom through Cairo Airport on transit to other destinations beyond Egypt, Israelis have avoided traveling to the country.”

The visit comes at a time when Egypt’s tourism industry is still reeling from deadly attacks targeting foreign visitors. Statistics from the Central Agency for Public Mobilization and Statistics show that the number of tourists visiting each year has decreased by millions. A severe decrease occurred after the downing of a Russian passenger plane over the Sinai Peninsula in October 2015, which killed all 224 people on board, following which several airlines halted flights to Egypt, and foreign embassies issued travel warnings.

The group is reported to have visited the Khan al-Khalili market and historic synagogues in Cairo, the Pyramids of Giza, Ancient Egyptian monuments in Luxor and the Aswan Dam, among other destinations.

In the past Israeli tourists were frequent visitors to Egypt’s Red Sea resorts in the eastern Sinai Peninsula, primarily arriving by land over the Taba border crossing. However, the 2011 revolution deterred many from traveling to Egypt.

Large protests against Israel also broke in 2011 in front of the embassy in Giza. However following the military-led ouster of former President Mohamed Morsi in July, 2013, diplomatic relations between the two states has gradually been improving. Following a four year closure, Israel reopened its embassy in September 2015.

The gourp’s visit has not been widely reported in Egyptian media, although one outlet named Watan sarcastically reported that the trip is one of “Sisi’s blessings,” commenting on President Abdel Fattah al-Sisi’s  attempts to court close relations with Israel.

Since taking office his government has destroyed several tunnels used to smuggle goods and weaponry between the Sinai Peninsula and the besieged Gaza Strip.

Egypt’s representatives also moved to obstruct a United Nations Security Council vote against Israel’s occupation of Palestinian lands in the West Bank, and the construction of Jewish-only settlements on these occupied territories in late December. This was said to be a result of pressure from US President-elect Donald Trump.

Egypt’s Foreign Ministry defended the move by claiming that Egypt’s representatives merely hoped to delay the resolution until a time when it would be more likely to pass.

Topics
Related
Egypt-Israel relations
Egypt responds to Israel’s plea and delays UN motion on settlements
Egypt’s presence on the Security Council has enabled it to hijack Palestinian attempts to get the settlements
CAPMAS
CAPMAS: Tourist arrivals decrease by over 50% in 2016
Tourist arrivals to Egypt in the first half of 2016 have declined by 51.2 percent in a comparison with
Egypt-Israel relations
Egypt warms up to Israel
Mohamed Hamama | Despite talk about the centrality of the peace process, the meeting was less about Palestine and more
EgyptAir
Egypt’s battered tourist industry anxiously awaits EgyptAir crash investigation results
Isabel Esterman | Egypt’s travel industry is watching anxiously as experts and officials air competing explanations for