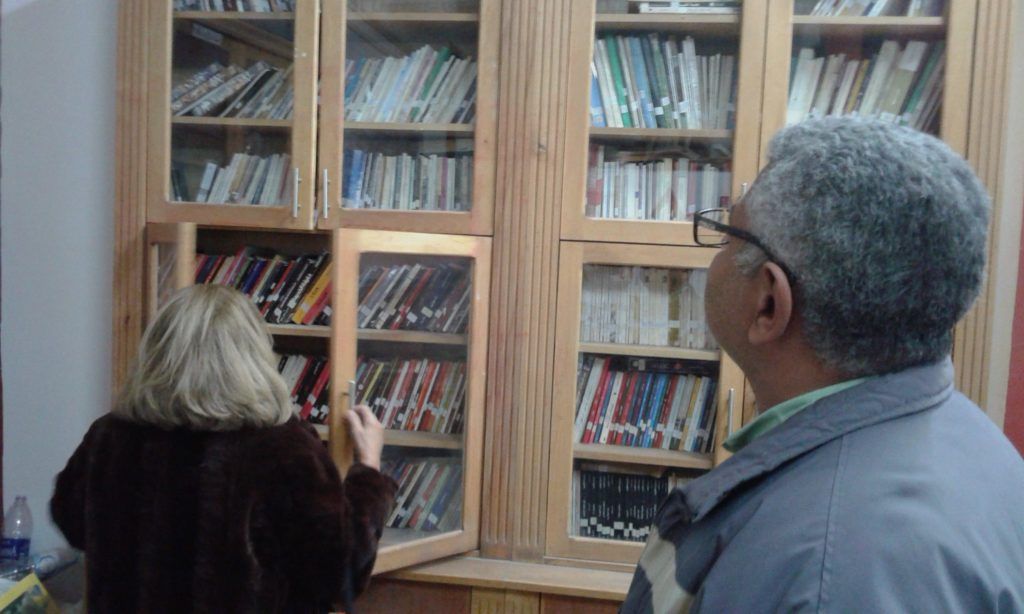 Diplomat Moushira Khattab visited one of the five Al-Karama libraries, founded by the prominent human rights activist Gamal Eid, in the Cairo district of Dar al-Salam on Tuesday. During her visit to the shuttered library she condemned continued attempts to close such public spaces for learning.

Eid claims that the shuttering of several of the publicly accessible libraries, all of which are in low-income neighborhoods, is “an act of revenge against me.” Eid, who is a critical human rights lawyer and director of the Arabic Network for Human Rights Information, is currently involved in the ongoing NGO foreign funding case. He was issued a travel ban early last year and his assets were also frozen.

One of the Al-Karama libraries located in Zagazig was officially shuttered upon the orders of the National Security Agency on December 12 without explanation, after two others were closed on December 1 in similarly ambiguous circumstances following pressure from municipal authorities. These branches were in Dar al-Salam on the Tora district.

Eid explained that the two remaining libraries in the Nile Delta town of Khanka, and the Giza neighborhood of Bulaq “were closed voluntarily” due to threats of official closure and confiscation by municipal authorities.

Khattab, former family and population minister and Egypt’s official candidate for the position of UNESCO’s director general, told Mada Masr: “I’m against the closure of any library, as it infringes on people’s right to education and their right to freely access information.”

After personally inspecting the Dar al-Salam library she added that “the only instance in which such a closure is acceptable, is if it is done in light of publications which promote hate or intolerance. Yet this is not the case here.” She continued: “There are many important educational books and titles found here, including novels by respectable authors.” The library’s metal shutters were opened on Tuesday afternoon especially for Khattab’s visit.

Eid expressed his hopes that Khattab’s influence would bring the closures of his libraries to an end, and help convince security officials and municipal authorities to reopen them as they “pose no threat to the regime.”

Khairy Kamel, resident of Dar al-Salam, lamented the closure of the Al-Karama branch in his neighborhood which his two children frequented. He said: “My children’s level of proficiency in reading and writing improved greatly when this library was open.”

Abdel Aziz Mahmoud, the assistant librarian at the branch, explained that as many as 200 children and adults would visit per week. “The first half of the day would be allocated to children’s activities, the second half for adults” he explained. Other than the presence of hundreds of books and a study space, it also includes recreational activities including chess games, drawing, music and choral singing, as do the other branches.

Eid explained that this was the first Al-Karama Library that he opened in May 2012. Originally from Dar al-Salam himself, he highlighted that he is personally funding these libraries, “from my own money, and from money that I had won from the Roland Berger Human Dignity Award.”  Ten library personnel were employed in the five branches.

Eid reiterated that his institutions are “entirely free of charge” and “completely separated from politics,” only aiming to grant economically disadvantaged children and adults access to public spaces for learning.

Eid told Mada Masr that a sixth Al-Karama Library “was in the process of being inaugurated” in the Fustat district of Old Cairo two months ago, but it has not yet been opened due to threats from the authorities and the restrictions imposed upon him.

According to the Al-Karama website the initial plans for the spaces included additional educational activities including competitions for Arabic literature and English language education. However, these plans, along with the libraries themselves, are now in a state of legal limbo.