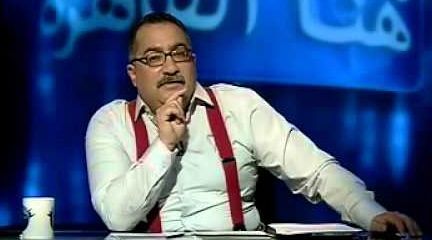 Recently, the show had been airing reruns of past episodes, raising speculation that it would be suspended amid increasing criticism of the TV presenter.

Eissa, who is also the editor-in-chief of daily newspaper Al-Maqal, said in a vaguely worded statement that he has “come to accept that this is a suitable moment to suspend the show, given the realities of the present moment.”

The channel, owned by media tycoon Tarek Noor, said that Eissa stepped down from his role on the show in order to ease work-related pressures and to have more time for his writing projects.

A few weeks back, before the show began airing reruns, Noor’s furniture convention, Le Marche, was suspended by the government for unidentified security reasons, resulting in millions of pounds in losses.

Lawyer Tarek Mahmoud filed a legal complaint against Eissa in December accusing the presenter of inciting sectarian tension on his show, after Eissa discussed a proposed bill about regulations on building churches in August, which was later passed into law.

A few days earlier, during the parliamentary session on December 19, the speaker opened fire on Eissa’s criticism of the legislative house regarding the church-building bill.

Parliamentary speaker Ali Abdel Aal said during the session that Eissa’s comments are a criminal act and a violation of Egyptian law.

Abdel Aal demanded that the General Authority For Investment take action against the TV channel for airing the episode, to which the head of the authority responded by saying that it is looking into the official complaint from Parliament.

In recent months, Eissa has been a vocal critic of both the Parliament and the government, including President Abdel Fattah al-Sisi, through both his TV show and Al-Maqal, moving away from his past role as a media ally of the state.

Topics
Related
talk shows
What happened to political TV in Egypt?
Mai Shams El-Din | In December 2015, Al-Nahar channel aired the last episode of “Akher al-Nahar” (End of
Al-Azhar
Azhar and Endowment Ministry slam Ibrahim Eissa remarks
Al-Azhar and the Ministry of Endowments — in charge of religious endowments — both slammed remarks
Dostour newspaper
Ibrahim Eissa is “The Boss,” but at what cost?
Heba Afify | On the set of Ibrahim Eissa’s new show “El Boss,” everyone refers to the celebrity journalist as