Amid the darkness of a growing economic crisis and a crackdown on civil society, for some Egyptians cinema has been a shining beacon this year.

The industry has suffered greatly in recent years due to film piracy, increased international competition and the economic woes that followed 2011. Cinema production decreased, forcing many filmmakers and producers to shift their attention to television, while those that remained pumped the market with safe slapstick comedy, seductive women and mediocre stories.

In 2014 and 2015 we saw more newcomers and comebacks from big directors presenting serious films and reasserting their presence in local cinemas. Some even generated impressive ticket sales. But this year multiple films produced independently from Egypt’s major production companies reached commercial cinemas – and even though their ticket sales were a fraction of their commercial counterparts, their entrance into the market marks a step forward for audience access to films that don’t tick all the mainstream boxes.

Despite the economic situation, restrictive laws imposed on filmmakers and ongoing censorship issues, these examples from both commercial and independent cinema suggest that the industry is rebuilding its economic viability. 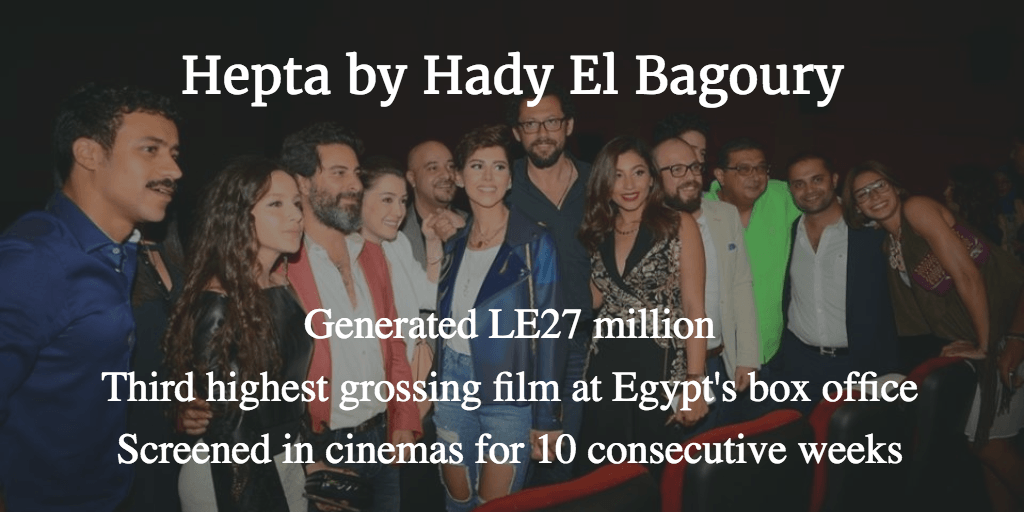 One big story is Hepta: The Last Lecture (read our review here). Based on Mohamed Sadek’s best-selling novel Hepta (2014), it was directed by Hady El Bagoury, who previously made LE1.7 million-grossing horror flick Warda (2014), LE4.6 million-grossing social drama Wahed Saheeh (2011) and co-produced LE8 million-grossing La Moakhaza (Excuse my French, 2014). It features an all-star cast of seasoned actors such as Nelly Karim and Maged al-Kedwany and youngsters such as Yasmine Raees (Bagoury’s wife), Amr Youssef and Dina al-Sherbini. It was co-produced by Bagoury’s Producers company and Mohamed Hefzy’s Film Clinic, and publicized by MAD Solutions.

Hepta grossed LE27 million in 10 weeks, making it the third highest grossing Egyptian film this year after Laf wa Dawaran (Back and Forth), which has grossed LE42 million so far and is running into its 14th week in cinemas, and Gaheem fel Hind (Inferno in India) which has grossed a little over LE32 million. Laf wa Dawaran stars Ahmed Helmy, who is Egypt’s most popular movie star at the box office, and Gaheem fel Hind was a funny summer comedy starring Ramy Imam, the son of Egypt’s biggest comedy tycoon. But earnest, action-free romantic comedies like Hepta rarely make such a box-office impact.

Hepta, however, was highly anticipated for months due to the novel’s popularity and its cast of rising stars, who were both heavily featured in its extensive marketing campaign. But word of mouth really seemed to make the film a success. Its unconventional storytelling saw a middle-aged male professor give a lecture on his conception of “the seven stages of love,” with one anecdote per stage illustrated in flashback mode. It has a final twist that some viewers figured out half-way through, but came as a surprise for others. But most of all, Hepta is optimistic — and most people have an interest in understanding the workings of romantic love. 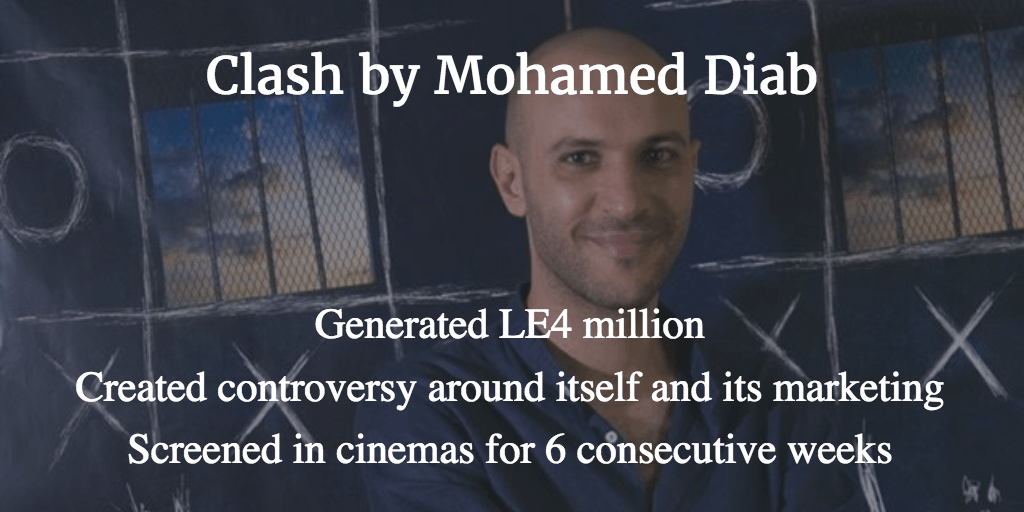 Another heavy hitter was Mohamed Diab’s Eshtebak (Clash), which premiered in Cannes’ Un Certain Regard and is Diab’s second feature as both writer and director after his 2010 hit 678, which deals with sexual harassment. Diab has previously written several films, including Ahmad Abdalla’s more arthouse film Decor, and Sherif Arafa’s popular, action-packed but not unproblematic two El-Gezira (The Island) movies depicting drugs and arms in Egypt’s south. Clash had a roster of international and local producers, including Film Clinic, and was publicized by MAD Solutions.

Set in a paddy wagon during the protests that followed Muslim Brotherhood-affiliated President Mohamed Morsi’s ouster in 2013, the film shows characters from across the political spectrum forced to share the space as the van travels from one protest to another. Clash grossed over LE4 million in the box office.

While many felt that Clash was a cinematic feat, its inability to represent the police force’s malice as well as its demonization of the Muslim Brotherhood resulted in dismayed Facebook discussions. It certainly achieved an impressive level of engagement with audiences. Industry players and the general public took to social media to review it, rant about it or get into long comment threads about its representation and problematic marketing, which involved claims of censorship by the director and a distasteful mobile app which enabled you to put your photo behind police van bars.

This debate was probably a motivating force for those affiliated with the subsiding revolutionary movement to see the film so they could give their two cents, but other viewers just saw it as a well-made political drama which captures the violent events of 2013.

Born in May 2015 out of the art house cinema project that established Cairo’s first dedicated alternative screen, this year Zawya Distribution really managed to bring low-budget indie Egyptian films to a commercial setting – a pioneering endeavor.

In the past, most self-financed films or those relying on crowd-funding or funding from NGOs or film festivals would rarely get a shot at a commercial screening, although they usually enjoy a hefty festival run and often garner awards abroad. When and if they are screened in Cairo, it is usually through a cultural center or a one off screening at a local film festival. Thus independent films were never taken into consideration when discussing their chances of commercial success.

Zawya Distribution now has 12 Egyptian films under its belt, and it strives to handle all aspects of the film from its world premier and its festival run to the theatrical release and television rights.

It was a natural progression for Zawya, who were already screening most of these films and created mini-campaigns for their promotion. Since Zawya (founded by older production company Misr International Films – Youssef Chahine) is connected to the industry and were already building a network of contacts from festivals to cinemas to TV channels, starting a distribution operation on the side helped fill a gap in the market and made financial sense for Zawya.

As both a distribution company and cinema, Zawya has expanded its reach this year to include commercial cinemas in Cairo and beyond. They hosted theatrical releases for Nadine Salib’s documentary Um Ghayeb (Mother of the Unborn), which was among their most successful, along with Dina Hamza’s documentary Gayye El Zaman (The Past Will Return), Yasmina Metwaly and Philip Rizk’s Barra fel Share’ (Out on the Street) and co-directed Alexandrian experiment Odet El-Feran (The Mice Room). They are currently working to bring Tamer El Said’s Akher Ayam el-Madina (In the Last Days of the City) to screens after it was abruptly removed from the Cairo International Film Festival’s official competition.

Another interesting venture was the release of animated documentary Moug (Waves), in which Suez-born filmmaker Ahmed Nour shares five special periods in his life in an attempt to capture the generation of the Egyptian revolution. It competed with commercial films and landed in the cinema for four or five weeks due to a successful marketing campaign by the director and his team in Suez.

While so far Zawya’s distribution arm has not been able to release its Egyptian films in Cairo outside of its Odeon cinema home in downtown, they have created new channels for international films they acquire the Egyptian theatrical rights for, such as John Crowley’s Brooklyn (2015), Lenny Abrahamson’s Room (2015) and Asif Kapadia’s documentary Amy (2015), releasing them in several local commercial cinemas. 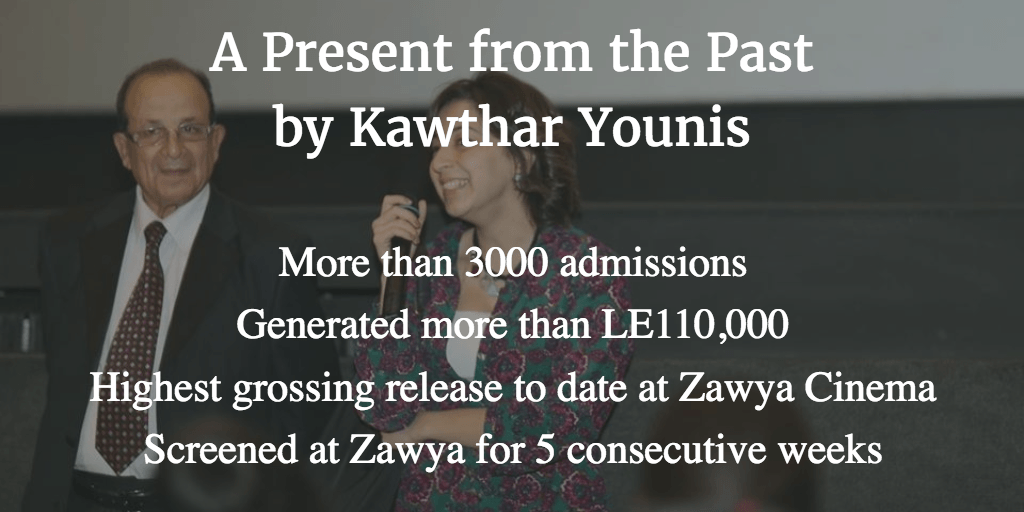 Zawya’s biggest commercial success this year was Kawthar Younis’s student documentary 20 September (A Present from the Past), which sold over 3000 tickets during its five-week run at Zawya making it the cinema’s most successful release to date. Most of Zawya Distribution’s other Egyptian releases saw between 400 and 1000 admissions.

For the movie, Younis secretly filmed a trip she took her father on to reunite him with his first wife in Italy. The Zawya team believe it did well because it’s very accessible and heart-warming, and point out that Younis worked hard on its marketing because she’s supporting her next film through this release. She attended almost every screening, holding Q&As and inviting important industry figures. Word of mouth seemed to play an important role as screenings became increasingly full

In all these cases marketing efforts were exerted, but it seems the social aspect of people recommending films or debating films resulted in their success.

Films based on best-selling novels tend to do well — Hepta is one example, but 2014’s The Blue Elephant was a raging box-office success too. Big names, however, did not always prove to be a recipe for success. Egypt’s biggest directors, veterans Yousry Nasrallah, Mohamed Khan and Dawood Abdel-Sayed all had box office flops this year with films grossing between LE300,000 and 950,000. Nasrallah’s film Brooks, Meadows and Lovely Faces had an all-star cast but failed to attract audiences. Perhaps it’s also safe to say that low-budget cheap-thrills films don’t cut it anymore — most films with subject matter that does not extend beyond shaabi music and cleavage pretty much flopped, such as Barty fi Harty (Party in my Alley, LE234,000), Tofahet Hawwa (Eve’s Apple, LE58,000) and Amoud Faqry (Backbone, LE29,000).

It also seems, unsurprisingly, that people want something relevant to their lives articulated in a language they can grasp.

“The general audience’s taste is developing and they are demanding more from cinema,” says Zawya’s managing director, Youssef Shazli. “The film has to be adding something new or something relevant to what’s happening now.“

Numbers are taken from elcinema.com’s box-office ranking, photos are courtesy of each film’s social media.

AD
You Might Have Missed
Carbon Colonies & A Green New Deal
Mugamma revisited: Reimagining the building and the square
Where do old lesbians go to die?
What we talk about when we talk about trees
AD
Rowan El Shimi
Culture journalist
107 articles on Mada

Topics
Related
2016 year enders
Culture A-Z: Only a few shining moments punctuated the gloom in Egypt’s arts this year
Our A-Z of arts phenomena in Egypt is less joyful than previous years, yet not completely hopeless.
cinema
A Present from the Past: A terrific film that could be more self-reflexive
Rowan El Shimi | “Stolen” footage made into a clear, well-paced narrative around the engrossing quest.
cinema
Young heritage enthusiasts give Port Said’s Cinema Rio a make-over
Rowan El Shimi | Port Said residents to see Zawya films in splendid old venue this weekend.
cinema
Clash: An awkward movie that suits an awkward situation
Andeel | Trying to humanize the police here is like trying to humanize the earthquake or sharks in a Hollywood