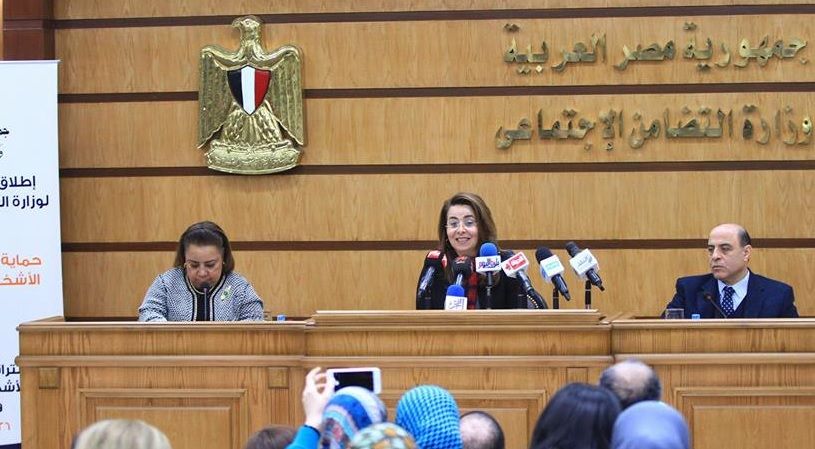 During a conference on Monday, Social Solidarity Minister Ghada Waly announced a medium-term strategy for “the protection, rehabilitation, and empowerment of persons with disabilities in Egypt.” This is a starting point for a more detailed and comprehensive national strategy for the future, Waly said.

“For the past two years, the ministry has been working on an agenda and activities involving persons with disabilities,” announced Waly. “All these efforts must be integrated into a unified strategy so that we can hold ourselves accountable, and so that society can hold us accountable in these areas.”

“It is time to bring about a change in our institutions, our legislation, our culture and society in order to realize a genuinely inclusive and supportive environment for the millions of people with disabilities in Egypt,” she added. “This from a human rights perspective, which guarantees full equality, support and integration.”

Deputy Social Solidarity Minister Nevine al-Kabbag suggested that the strategy is just “the beginning of the road,” adding that its timeframe span 2017 to 2020, and that the ministry will review it in mid 2018 to monitor its progress and shortcomings.

The strategy is said to be based on six main goals.

First and foremost, these include creating legislation and national policies that regulate the rights of disabled people in line with international conventions.

At the conference, Heba Hagras, a parliamentary representative for disabled persons, confirmed that a new Law for the Protection of Persons with Disabilities is drafted and is likely to be issued in January.  Hagras previously told Mada Masr that this law will incorporate a new philosophy guaranteeing the rights and freedoms of persons with disabilities, and be rights-based as opposed to aid-based. “The laws prior to Egypt’s ratification of the Convention on the Rights of Persons with Disabilities in 2008 are aid-based laws,” said Hagras. “The concept of aid is based on the government’s distribution of rights, with the extent of these rights being codified.”

Hagras said that a rights-based approach would mean that all Egyptians will be legally recognized as equals. The current legislation (Law 39/1975, and its amendments of 1981) governing the rights of persons with disabilities “addresses only one issue,” she said, “and that is rehabilitation and employment in the public and private sectors. It does not address any other aspects, to the point that many people have dubbed it the ‘Five Percent Law’.” This in reference to the law’s stipulation that the workforces of large companies include a quota of at least 5 percent of persons with disabilities. Even this provision of the law is effectively not enforced, Hagras pointed out.

In September, the state-appointed National Council for Persons with Disabilities presented Egypt’s Parliament with the draft law, which legislators debated but are yet to pass. Disabled persons’ rights activists have criticized Parliament’s handling of the draft, as it has not been put forth for public discussion. Activists have also pointed out that the Ministry of Social Solidarity and the National Council for Persons with Disabilities have a monopoly over the drafting of its provisions.

Some provisions of the draft law have also been criticized, particularly those pertaining to the formation of the National Council for Persons with Disabilities, and how its members are selected. Other criticisms concern the relationship of the council to the government, with arguments that the draft law would effectively place it under the prime minister’s umbrella, which would limit and restrict its independence. Activists have demanded that the council, like other national councils, issue its own bylaws to regulate its duties, responsibilities and the role of its subsidiary bodies, so that it can ensure its independence from the state’s executive branch.

During Monday’s conference, Hagras said the fact that the Social Solidarity Ministry did not much change the draft submitted by the national council before handing it to Parliament was a cause for optimism.

After legislation, the second goal of the ministry’s strategy is updating the national database to include up-to-date numbers of individuals with disabilities, along with disability types and geographical distribution. Kabbag explained that a failure to modernize this national database would be detrimental to the ministry’s strategy, while also negatively affecting the formulation of policies and projection of appropriate budgets. Kabbag announced that nearly 890,000 people nationwide are covered by the ministry’s umbrella and thus benefit from its monetary support mechanisms. Beneficiaries include many people with mild disabilities, she added, meaning that they are capable of work, yet it does not include countless disabled persons who are most in need of support.

The strategy’s third goal is putting in place aid evaluation programs by 2018, in order to provide accessible, comprehensive and high-quality assistance for persons living with diverse types and extents of disability. This goal also includes the provision of vocational training opportunities along with entrepreneurial opportunities for persons with disabilities who are able to work, so they can augment their incomes and raise their standards of living.

Fourth, the strategy aims to create an effective social security system that is transparent and accountable. Its programs aim to increase the number of individuals who benefit from its monetary support mechanisms by 30 percent, and increase its allotted social security budget by 20 percent.

Fifth, the strategy hopes to increase the number of those eligible for its “Karama” (Dignity) social security scheme, which is also a monetary support mechanism, from 40,000 to 200,000.

Finally, it aims to raise awareness of the challenges confronting persons with disabilities by working to further integrate them into society, especially in the field of education, by 30 percent by 2018.

At Monday’s conference, officials claimed that various ministerial policies will be enforced immediately. These include the provision of a unified computerized database to streamline the ministry’s medical commission requirements, which are utilized to assess individuals’ disabilities and to determine their severity. They also include the issuance of special identification cards that allow persons with disabilities to use public transport more easily and effectively, and programs for the integration of children with disabilities into preschools and special educational centers as a first step to integrate disabled people into educational facilities, schools and institutes.

But Abu Zekri also expresses some reservations about the recently proposed draft law, pointing out that it merely retains the 5 percent quota for the employment of persons with disabilities in the public and private sectors. It should include guarantees that employers uphold this percentage, he argues, as they typically do not. Abu Zekri adds that in developing countries employment quotas should rise to 12 percent for those with disabilities.

There are positive aspects to the stated ministerial strategy, Abu Zekri says, but it must be the National Council for Persons with Disabilities that implements it, as opposed to the Ministry of Social Solidarity acting alone.

It is important that the council be granted the powers to implement the strategy, Abu Zekri says, “especially as the ministry and other ministries maintain a presence of at least one of their executive members on the council, which is supposed to formulate policies and strategies. These executive authorities are already entrusted with monitoring the implementation [of such strategies].” According to the lawyer, this leads to a conflicts of interests, roles and powers, and hampers the implementation of policy.

Topics
Related
Brazil
How did Brazil reduce poverty and inequality?
Sarah Sabry | At the World Social Science Forum in September 2015 in Durban, South Africa, many presentations offered
Association for the Welfare of Dwarfs in Alexandria
Dwarfs of Egypt unite
Jano Charbel | Ahmed Fouad is an employee at the Health Ministry in Alexandria. He’s also one of the roughly 75,000
2014 Constitution
2013 draft constitution
PART ONE: THE STATE Article 1  The Arab Republic of Egypt is a sovereign state, united and indivisible,
Disability
Differently Enabled by Omnia Arfin
Omnia Arfin | In addition to the normal daily challenges, 12 million people with special needs face difficulties at