Trump and the possibilities of resistance

For many targets of Trump’s right-wing populism — including immigrants, Muslims and leftists — November 8 emerged as a political nightmare when Donald Trump won the US presidential election. His win came with the approval of the Electoral College, despite losing the popular vote. Hillary Clinton garnered 64 million votes, Trump 62 million and other political parties seven million collectively. This effectively means 133 million people voted in a country of 381 million, and less than half the population supported the president-elect.

After losing the presidential election and the majority in Congress, the Democratic Party went into retreat. From the Democratic Party to the mainstream media, liberals have widely responded to this political crisis by calling for political reconfiguration and a politics of love. In a recent article in Rolling Stone magazine, African-American commentator Van Jones said love would overpower Trump, highlighting the necessity of a value shift in the political sphere rather than a direct challenge to the structure of the Electoral College or right-wing politics. Congressman Keith Ellison bid for the leadership of the Democratic National Committee. Such moves by Democrats have been limited, due to their acceptance of the political status quo — one that maintains an Electoral College system and does not fully challenge the far-right and conservative movements.

Right-wing conservatism has been challenged through a range of solidarity actions, including but not limited to escorting marginalized groups, developing sanctuary cities to oppose the president-elect’s plan for massive deportations, and calls for protests on Inauguration Day to oppose the president-elect. These have not been organized by the Democratic Party leadership — rather by everyday people from the center-left to the left.

What is particularly egregious is that Trump’s policies will be a detriment to the environment.

The election of Trump as president of the United States is a shocking and dangerous turn of events — not only for the US, but for the Middle East and the environment. It is a decisive shift, representing the latest failure of center and left parties in the wake of the Great Recession, opening the way for the triumph of a candidate who used right-wing populism and based his campaign on racism and xenophobia. On the one hand, Trump is both the product of a failed system and of the political establishment, while also representing a challenge to that same political establishment. As Lance Selfa has argued in Jacobin magazine, “Trumpism is part of a worldwide phenomenon born from the wreckage of the Great Recession. In country after country, the financial crisis has pushed mainstream politics to the right.”

Under the rubric of demagoguery, Trump presented himself as an alternative to the entrenched political establishment by highlighting his financial and television endeavors. This emboldened a section of the American working class that wanted a leader who could speak to their concerns. Rather than provide concrete policies that would ameliorate the lives of the working class and working poor, the Democratic Party leadership chose a mainstream candidate that wanted to purport business as usual.

Trump’s campaign has dangerously emboldened far-right hate groups, yet it has also normalized the policies of the conservatives to mainstream politics. The far-right has confidence, a platform and a president now to cohere around, which has been particularly visible in Trump’s cabinet. The president-elect nominated Stephen Bannon — the executive chair of the far-right media company Breitbart New — to advise his transition team, and suggested Seema Verma for the Department of Health, who has cut funding for Medicaid and Medicare. What is particularly egregious is that Trump’s policies will be a detriment to the environment — something that will have a global impact, especially as climate change produces more unpredictable living conditions for migrants and the working poor. He vows to push more fossil fuel extraction and build more oil pipelines within his first 100 days in office.

The way he will accomplish this is through his cabinet, specifically with his projections for the Environmental Protection Agency (EPA) and his choice of energy secretary — Oklahoma Attorney General Scott Pruitt, who sits with Rick Perry, the former governor of Texas, on the board of Energy Transfer Partners. ExxonMobil CEO Rex Tillerson is projected to be the next Secretary of State, which will further unite the interests of fossil fuel capital with those of the US federal government. If oil pipelines in the United States and elsewhere are further extracted, then the amount of CO2 released will make it impossible to meet the goals of the recent Paris Climate Accords, which include keeping global warming under two degrees celsius, which is the threshold at which catastrophic long-term changes begin to take place.

Eight years on from the financial crisis and great recession, the United States and many other countries are still experiencing the longest, slowest economic recoveries in memory. This has, of course, diametrically shifted the political climate. At the same time, young people have embraced socialist views, according to Gallup polls, which have found 55 percent of those under 30 years old having a positive view of socialism compared to 27 percent of those between the ages of 50-64. This goes to show that there is an ideological and political shift since the Cold War that has generated a critique of capitalism and the birth of various social movements, including millions of voters supporting democratic socialist candidate Bernie Sanders, the Black Lives Matter movement and most recently the Standing Rock opposition to the Dakota Access Pipeline.

As the US enters a politically harrowing period, it is worth asking how communities strategically build leadership and solidarity networks.

The recent victory at Standing Rock Sioux Tribe (Hunkpapa Lakota) has shown that it is possible to win struggles, even when the political landscape seems bleak. Standing Rock was unique because it had a clear purpose and target — the Dakota Access Pipeline. In this case, specific companies, such as Wells Fargo Bank and Citibank, were the targets. Energy Transfer Partners lost US$450 million and the DeFund DAPL group has shown that more than $22 million has been withdrawn from banking institutions involved in the pipeline project. Whether people joined this resistance movement for the sake of supporting Indigenous sovereignty or for environmental rights, it was a remarkable moment of political unity. There is a possibility that the pipeline will be redirected to another location and of the opposition pulling out on the deal after the January 1 deadline, but the decision by the US Army Corps of Engineers on December 4 to deny a necessary permit to the Dakota Access Pipeline would not be possible if it were not for an international movement. With two blizzards and a Trump presidency, it will be more imperative to strengthen the collective organization that led to this success. 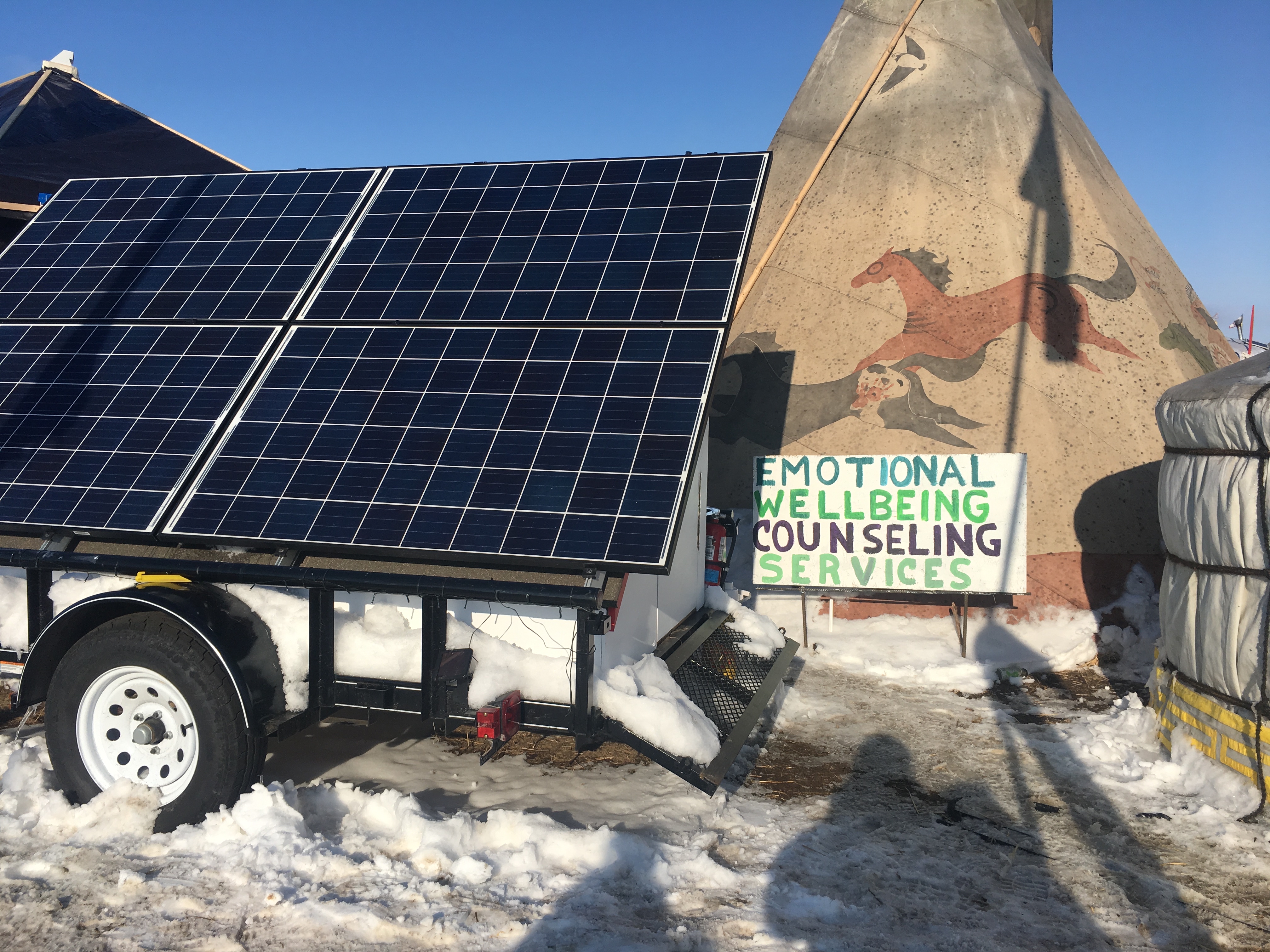 Solidarity among Indigenous nations is growing. In the summer of 2015, 115 First Nations signed a historic treaty to fight the extraction project. One question that this poses for environmental activists and people in the Middle East is how Standing Rock can be a model for campaigns to divest from US military projects in Iraq, Afghanistan and elsewhere. First, the movement clearly targeted companies that profited on oil and the destruction of the environment, which is something that could be adopted for anti-war movements that want to divest from companies that develop weaponry.

Second, Standing Rock provided a platform for various consistencies to develop a united front on an environmental issue that linked to the history of oppression and capitalist endeavors. Concerning the Middle East, this is particularly important given that the region has been under the tutelage of Western powers during the British and French mandate and subject to colonial rule. An anti-war movement that honors the lives of people in the Middle East and acknowledges the historical wrongs, while providing concrete solutions for the present, will require democratic grassroots solidarity organizing by the working class and poor in the MENA region and abroad. Standing Rock has taught many of us who went to the camp that protests matter and that we cannot just rely solely on electoral politics or the Democratic Party. This moment and these protests have the possibility of generating a broader anti-war movement that incorporates people of color.

The victory at Standing Rock won’t be permanent without the revolutionary transformation of the societies we live in.

As the US enters a politically harrowing period, it is worth asking how communities strategically build leadership and solidarity networks to challenge companies or public state officials that undermine their health, water, and livelihoods? It is not just a matter of self-determination, but putting power in the hands of the people to decide collectively.

The history of the American Indian movement in the 1970s and today are pivotal because of their radical politics. The victory at Standing Rock will not be permanent without the revolutionary transformation of the societies we live in. The self-organization, tenacity, community and warmth from Standing Rock Sioux Tribe has been a lesson that everyday people are key to living in a more just society. Standing Rock differed from recent movements such as Occupy Wallstreet (OWS). Fortunately, OWS was a response to a global economic crisis that galvanized a new generation of activists to openly and collectively organize. Unfortunately, there were no clear demands and leadership and it was diffuse. Which meant that it could be subject to implosion. What made Standing Rock distinct was that there was clear leadership, structure, and internationalism that allowed for a thorough political strategy.

At this rate, fossil fuel projects in the US will continue to destroy this planet and our communities. The urgent need to build political and activist organizations can be felt by everyone in the initial upsurge of protests against Trump. If we fight and win, we can put people and the environment first and what we gain is freedom and equality for all.

AD
You Might Have Missed
Mugamma revisited: Reimagining the building and the square
Where do old lesbians go to die?
Carbon Colonies & A Green New Deal
What we talk about when we talk about trees
AD
Edna Bonhomme
3 articles on Mada

Topics
Related
Italy
The first act of a future populist Italian government?
Roberto Pitea | On the Italian constitutional referendum vote and rocky times ahead.
US elections
Paradoxical truths of an isolationist empire
Omar Robert Hamilton | "It has never been easier to ignore ideas and create new truths in their place."
US elections
How Donald Trump won the US presidency
Ellis Goldberg | Ellis Goldberg explains the American voting system in an attempt to understand how Trump won the presidency.