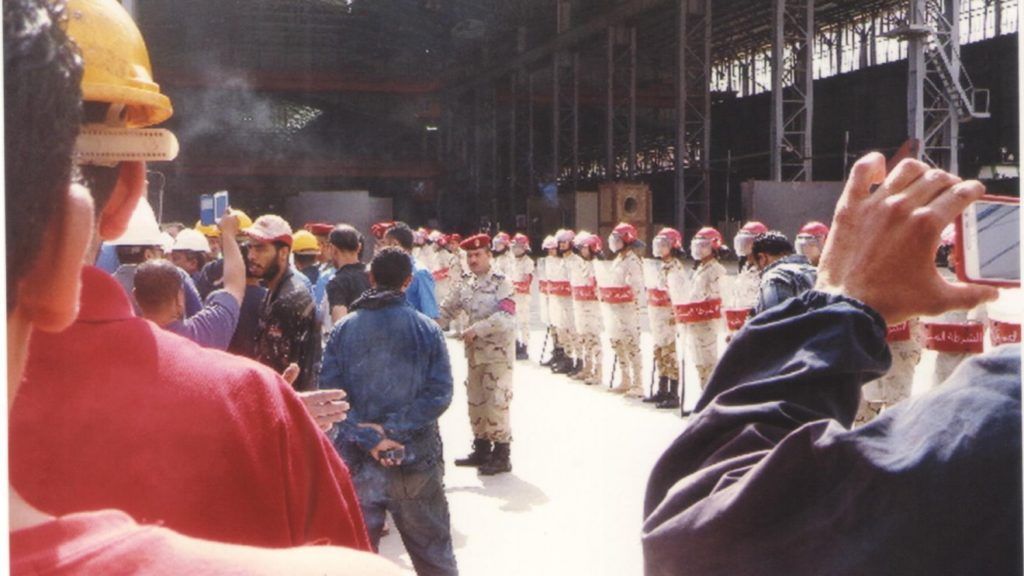 A military court postponed a verdict against 26 civilian workers from the Alexandria Shipyard Company for the seventh consecutive time on Tuesday. Originally expected on August 2, the military tribunal is now due to issue the verdict on January 24, 2017, although this may be postponed yet again.

The workers are standing military trial for a two day protest staged on the company’s premises on May 23 and 24. Fifteen of them were detained in May, when they were either arrested or voluntarily handed themselves in.

They stand accused of instigating a labor strike and disrupting the company’s operations, which have been under the administration of the Defense Ministry since 2007, even though the workers did not engage in work stoppages.

Defense lawyer Mohamed Awwad explained that 19 of the 26 have submitted their resignations upon the recommendation of a high ranking military official. Allegedly the official informed them that voluntarily resignation would lead to their release, pending trial before the Alexandria Military Court.

Awwad told Mada Masr that “of the 11 workers who still have not handed themselves in, four have submitted their resignations in the hope that they will not be sentenced.”

He added: “Despite being forced out of their jobs, the 26 workers may still be sentenced to prison, or issued a suspended sentence.” There is no guarantee that their resignations will amount to acquittals before the military court.

According to Awwad those who have neither resigned nor handed themselves in “know that they fear losing both their jobs and their freedoms, as they are well aware that they can still be imprisoned.”

The wages of all 26 workers on trial are not being paid, and 1,000 of the 2,300 workers have been denied access to the company’s premises since May 25, when administrators and security forces imposed a lockout on the company. They are only being paid their basic wage.

Shipyard authorities argue that protests held on May 23 and 24 obstructed production at the company. Awwad said, “only the 1,300 workers have been allowed to resume their jobs, so the company is only working at around half of its original capacity, or less.” Several workshops and production lines at the company were stalled and out of operation since before the labor protests in May.

During the two-day industrial action, protesting shipyard workers demanded that the company reopen these workshops and production lines.

The protests were also demanding the payment of the national minimum wage of LE1,200 per month, overdue profit-shares, annual bonuses, health insurance coverage and the dismissal of the company’s chief administrator.

Awwad explained that practically none of these demands have been met, although a new chief administrator was recently appointed to preside over the company.

He added: “The workers argue that they can no longer raise their labor related demands at the company, as they feel threatened by loss of their jobs or referral to military trial. They know that those who protest will likely be fired, denied wages, and/or stand before a military tribunal.”

Awwad believes the military judiciary is sending the defendants the message that labor protests or strikes will not be tolerated at military administered companies, by saying: “Hand in your resignations from work at this military-run facility and we will release you pending trial. But we can still sentence you to imprisonment as we see fit.”

The trial is the most recent of four cases since 1952 which have seen civilian laborers stand military trial. Past sentences issued during the tribunals have ranged from incarceration, to suspended sentences of imprisonment and even death sentences.