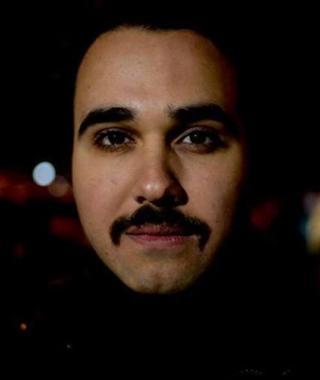 The two-year prison sentence against writer Ahmed Naji, who has been jailed since February on charges of public indecency,  was suspended on Sunday pending review on January 1, 2017.

Naji is expected to be released later on Sunday, after Tora Prison authorities receive a fax from the South Cairo Criminal Court, his lawyer Mahmoud Osman told Mada Masr.

A department within the South Cairo Criminal Court, delegated by the Court of Cassation to speed up the process of reviewing urgent cases, has been tasked with examining Naji’s case on January 1, Osman added.

Naji, a 31-year-old journalist, blogger and novelist, was imprisoned for “violating public modesty” in relation to a chapter of his hybrid graphic novel Istakhdem al-Haya (The Use of Life, 2014), after a reader filed a case against him, arguing that its sexually explicit content made him feel ill.

A court acquitted Naji in December 2015, but on the prosecution’s appeal in February 2016 he was sentenced to the maximum term of two years and imprisoned immediately. Tarek al-Taher, chief editor of the state-affiliated Akhbar al-Adab magazine in which the novel was serialized, was sentenced to a LE10,000 fine in the same case.

The move caused widespread outrage, from Egypt’s culture minister and fellow novelists to the international press, as a step further in a barrage of censorship, closures and imprisonment sweeping the political sphere. Many works of Arabic literature contain content of a sexual nature.

Naji was awarded the PEN/Barbey Freedom to Write Award in May this year.

Topics
Related
freedom of expression
1st lesson learned from Ahmed Naji’s jailing: Individuality
Nael El Toukhy | Many hated Naji because individuality is thorny, lonely and uncomfortable, even for those claiming to
Ahmed Naji
Global solidarity readings for Ahmed Naji to increase pressure on Egypt
Jenifer Evans | "Every grain of sand that enters a writer's life potentially becomes part of their writing, and this
Ahmed Naji
The police and citizens’ hair
Iman Mersal | There is no problem in a policeman, as a citizen, having an opinion about the appropriate length of a
Ahmed Naji
‘Literature’ is on trial in Egypt
Teresa Pepe | In August 2014, an Egyptian citizen named Hani Saleh Tawfik came across issue 1097 of literary magazine