اقرأها بالعربية
A Cairo without animal carts?
Cairo’s governor has proposed a project to rid the capital’s streets of animal carts. He is not the first to do so, but how likely is it to succeed this time?

Cart owners don’t think the new government program Cairo Without Animal Carts will achieve its stated aim of ridding the Egyptian capital of carts drawn by horses, donkeys and mules.

The program, announced by Cairo Governor Atef Abdel Hamid at the end of November, would marshal in a process by which animal-drawn carts would be phased out and their owners given economic support to purchase motor vehicles.

Yahia Shawkat, an urban researcher and one of the founders of 10 Tooba Applied Research for the Built Environment, explains that “Certain types of carts — such as those used in garbage disposal, recycling, tanneries, pleasure rides — are usually associated with the local industries of certain neighborhoods.”

Animal-drawn carts sustain thousands of low-income households, and yet, in recent years, numerous municipal officials across several governorates have sought to ban them, attempts which have proven unsuccessful.

In the Cairo Governorate alone, movement against carts has been ventured as an outright prohibition in 1973, 1987, 1999 and 2006 and as the center of anti-cart police campaigns in 2010.

The state’s argument for banning animal-drawn carts is twofold: As slow moving vehicles, carts obstruct the flow of traffic and lead to road accidents, and carts negatively affect Egypt’s image, presenting it as unclean and disorderly. 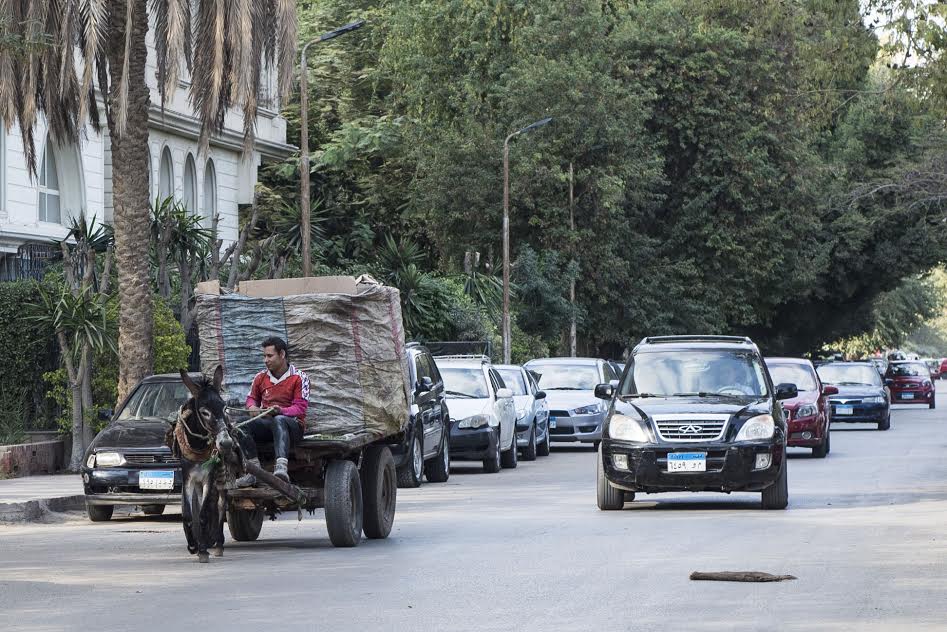 But far from this understanding of animal carts as primitive and backward, Shawkat suggests that they are actually safer and more environmentally friendly. The attempts to ban and curb the use of carts in Egypt, he has previously argued, “cannot be dissociated from it being a poor person’s vehicle.”

On last week’s episode of television show “Manchettes Qarmouty” (Qarmouty’s Headlines) last week, which is broadcast on the privately owned Al-Assema television channel, Gaber al-Qarmouty arranged to have a donkey cart rolled into the studio. With dramatic flare, the words “Goodbye to the animal carts of Cairo” were written on the animal’s hind.

Qarmouty climbed into the back of the cart with its owner, Sameh, and asked if the word “arbagy” (cart driver) – which is often used as a derogatory term to roughly denote someone who is callous, of low-social standing, or with little formal education – offended him.

“Yes, it upsets me,” Sameh responded. In a show of respect, Qarmouty kissed his head.

Qarmouty continued on to outline the failure of previous attempts to ban animal carts, asking Sameh about a range of viable alternatives, including motorcycle-rickshaws.

Buy-in and feasibility of a Cairo without carts

Within the framework established by the Cairo Without Animal Carts initiatives, the sale of motor vehicles – ranging from motorcycle-rickshaws and trucks to pickups – will be incentivized by providing cart owners with soft loans that have long-term repayment plans, on the condition that they forfeit their carts. While the full extent of the financing details has not been disclosed, Cairo’s governor has stated that the Fund for Social Development and civil society organizations will be a part of the process.

However, the governorate’s plan faces potential obstacles on two fronts: the legal problems posed by an influx of new first-time drivers and doubts regarding the transition’s economic feasibility that are joined to skepticism about being lifted out of the informal economy and into the state’s line of vision.

The transition from animal-drawn carts to motor vehicles must confront problems posed by the literacy requirement for drivers licenses, as many of Cairo’s cart drivers cannot read and write. However, according to the state-owned Al-Ahram newspaper, Cairo Governorate has taken the issue into account and is offering basic literacy courses in coordination with the Fund for Social Development and adult educational institutions.

The larger issue, however, centers on the financial feasibility of the modernization plan and whether those whom it will most affect view it as legitimate.

The financial terms suggested by Cairo Governorate, Shawkat argues, would be a significant burden on households dependent on economic activities linked to animal-driven carts. “Many would go into debt, and defaults on loans would likely be very high.”

While Shawkat estimates a cart driver’s monthly net income at LE1,400, the labor that is associated with the mode of transport is often precarious. Sameh, the driver that spoke to Qarmouty and works in a supplementary role for construction companies in the capital, said his take-home wages have fallen to a few hundred pounds due to the economic downturn.

Ahmed Hamdy, the owner of a horse-drawn cart from which he sells tangerines in Cairo’s working class neighborhood Manshiet Nasser, puts the cost of a cart between several hundred pounds and approximately LE2,000, depending on its specifications and weight capacity. The price of an adult horse, he adds, can range from LE1,000 to LE5,000, while the cost of a donkey or mule may range from several hundred pounds to LE2,500.

In comparison, a used pickup would cost tens of thousands of pounds and a used truck would come in at over LE100,000.

“How could we make a living or feed our families without our carts? Our livelihoods depend on these animals and equipment,” says cart owner Galal Hafez, who lives in Cairo’s working class neighborhood Zahraa and has spent the past 30 years collecting paper, cardboard, plastic and glass for recycling. His two sons work in the same line of business, and each operate their own animal-drawn cart.

“Yes, sometimes our carts obstruct traffic,” Hafez admits, but he contends that traffic is slow due in greater part due to the number of cars on the road.

Hafez says his horse consumes about LE50 worth of animal fodder each day and sleeps in the family’s living room, as he has nowhere else to keep it. He estimates he takes home LE1,200 per month from the recycling he is able to collect using his cart. 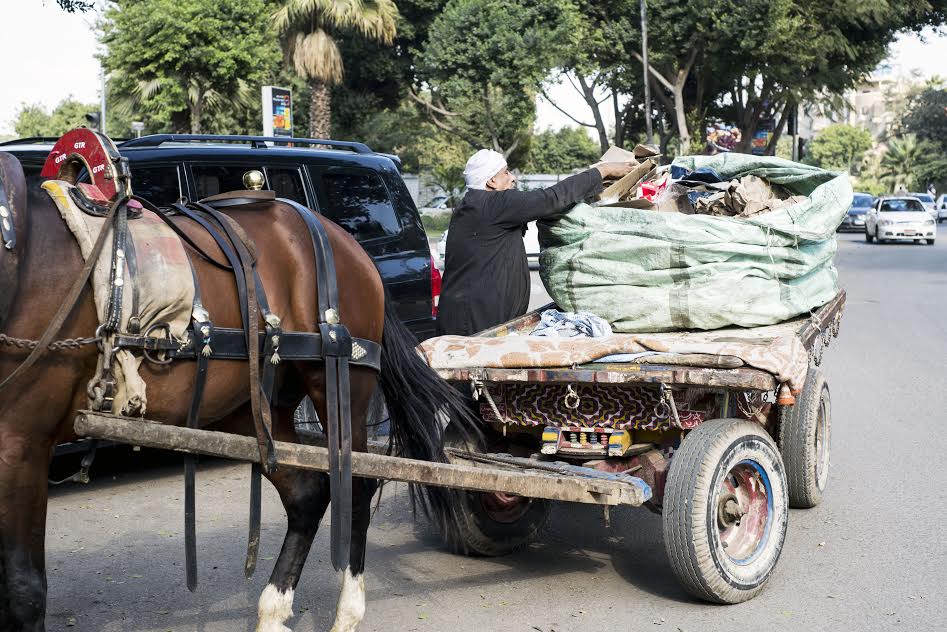 While Hafez had not heard of the Cairo Without Animal Carts initiative, when informed he professes skepticism of its chance of success.

“If I could afford to pay installments for a truck, I would. But we’re struggling just to pay for life’s basic necessities. We are barely making a living these days,” he said.

Gamal Mahmoud drives his cart through the Cairo neighborhood of Maadi, collecting and reselling used household goods. He states that any attempt to ban animal carts will be “a failed project.”

Not dissimilar to Hafez, Mahmoud concedes that carts can obstruct the flow of traffic and says he would gladly trade in his donkey and cart for an automobile, but that he cannot afford the change.

“What about people like me who cannot afford to pay for installments?” he says. “Are we supposed to steal so that we can buy a truck?” 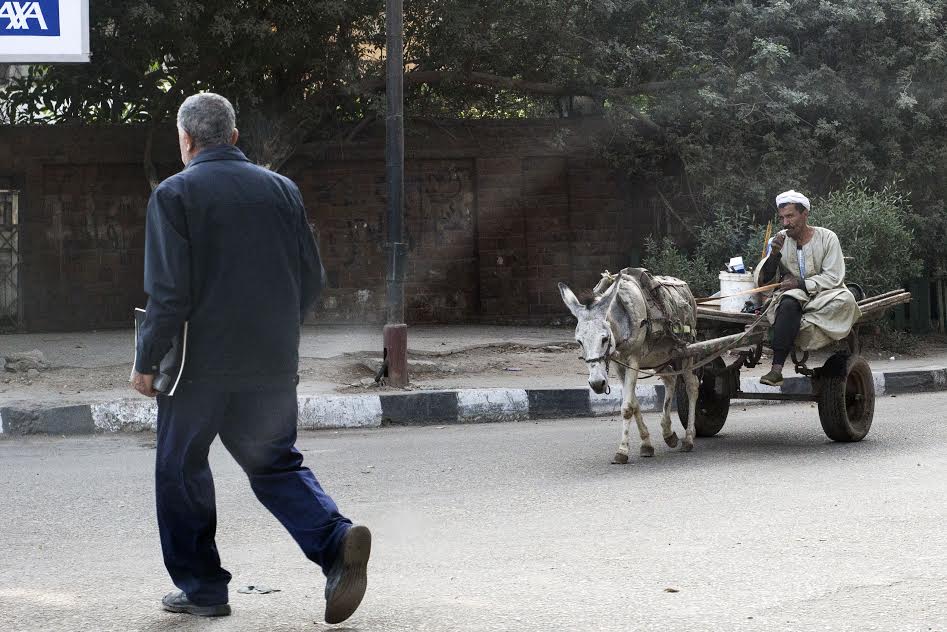 In Manshiet Nasser, a line of animal-drawn carts loaded with refuse slowly wind their way down streets, making their way toward disposal and recycling centers. Here, Hamdy parks on a side street to sell tangerines.

While cart drivers’ placement in the informal economy comes with burdens – including the high cost of equipment and animal maintenance – Hamdy says that his lot is better now than if he had to cover the higher costs that come with motor vehicles. He looks around, pointing out the cart workshops around him.

And beyond whether the government’s plan is economically prudent, the tangerine seller says a motor vehicle would not suit his trade. The flatbed of a motorcycle-rickshaw can transport less than half of the two tons his cart can carry and is restricted in the type of cargo it can carry due to its dimensions. While his cart is longer than a pickup truck, Hamdy says, “it is also narrower and can be driven down tight alleyways.”

Across the street, Ahmed Farid, another fruit vendor, says he is frequently harassed by police officers and municipal authorities. “They either want to fine us or confiscate our carts. We just want to be left alone to tend to our work.”

Farid says he would never trade in his horse and cart for a motor vehicle, because he is concerned that a license plate would make it easier for the police to monitor him.

A proposal for regulation and reform

Regulation and reforms rather than a ban are the best way to address the issues posed by animal-drawn carts, says Shawkat, pointing out that carts are allowed on the streets of the United Kingdom and the United States, among other industrial and “civilized” countries, albeit with strict regulations governing their operation.

“A complete ban would amount to the loss of the livelihoods of countless cart drivers and their families,” he says.

Shawkat argues that special lanes should be created for animal-drawn carts to ease traffic congestion, particularly on high-speed intercity roads and highways. He also advocates for other measures to reduce the likelihood of accident, such as mandating carts by equipped with battery-powered lights and reflectors, so as to be more visible at night.

However, while Egypt has one of the world’s highest rates of traffic accidents, they are not primarily caused by the presence of animal-drawn carts.

In 2015, 25,500 people were either killed or injured in traffic accidents, according to the Central Agency for Public Mobilization and Statistics (CAPMAS). Private cars caused 36.8 percent of accidents, with trucks causing 27.8 percent and taxis 18.9 percent.

The figures suggest that, even if a move to ban animal-drawn carts from the capital’s streets were possible, it may not lead to a significant decrease in accidents.

AD
You Might Have Missed
Mugamma revisited: Reimagining the building and the square
What we talk about when we talk about trees
Carbon Colonies & A Green New Deal
Where do old lesbians go to die?
AD
Jano Charbel
78 articles on Mada

Topics
Related
road safety
Over 25,000 deaths, injuries resulting from road accidents in 2015: CAPMAS
Road accidents in Egypt have resulted in the death and injury of 25,500 people in 2015, according to
donkey carts
The donkey cart journal
Yahia Shawkat | This conversation with Am Salah elucidates how carts are actually the smart vehicle of the city.