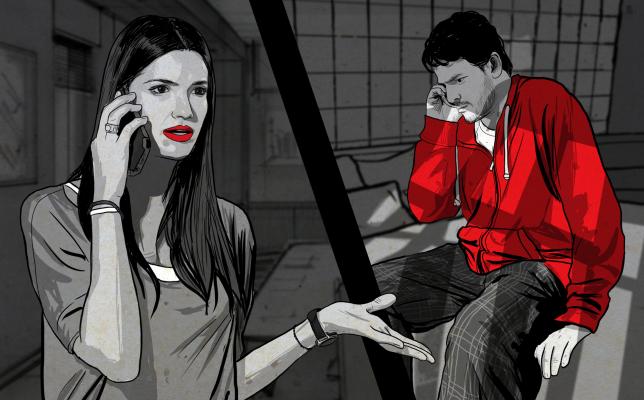 The Dubai Film Festival has pulled out of screening the world premiere of the Egyptian movie The Unknown Sweet Potato Seller (Ba’a’ al-Batata al-Maghoul) for unspecified reasons. The short animated movie, which was due to be screened on Monday at the 13th Dubai International Film Festival (DIFF) as part of the Muhr Short competition, was pulled from the schedule with no explanation given.

DIFF issued a brief statement on Monday that simply stated that the festival would be “unable to screen the film due to unforeseen circumstances.”

Directed by Ahmed Roshdy, with a screenplay by Hamdy Hassan, and starring Khaled Abol Naga and Tara Emad, the movie’s trailer explains that it is “inspired by true events.” According to the film’s official Facebook page, it is based on the “brutal murder of a child selling sweet potatoes at Tahrir Square during the Egyptian revolution.”

In comments to Mada Masr, Roshdy explained that “the film only partially touches upon, but does not focus on the story of Omar Salah. It focuses rather on the story of a fictional artist, Khaled, who seeks justice.”

Earlier last month, Roshdy tweeted the news that his film was officially selected to be screened at the Dubai International Film Festival and that winners are eligible for an Oscar nomination.

When asked if the cancellation of the movie’s screening at the DIFF16 may prevent it from receiving such a prestigious nomination, the director told Mada, “Unfortunately. Yes.”

“We are trying to find out what the real reasons behind the pulling of the movie are,” Roshdy said. “We were only informed that it would be cancelled around 24 hours before it was due to be screened.”

When asked if there was pressure from Egyptian or Emirati authorities to cancel the scheduled screening of his movie, Roshdy replied, “God knows.”

The director added, “We are going to issue a formal explanation when we have one, in the next few days, hopefully.”

Given the lack of any clear explanation regarding the refusal to screen The Unknown Sweet Potato Seller at DIFF 2016, there is speculation on social media that the movie’s subject matter — touching on child labor, police brutality and the murder of unarmed civilians by security forces — was deemed unsuitable for screening before audiences in the conservative Gulf Arab monarchy.

Ahead of the scheduled premiere of this movie, its star Abol Naga posted a video interview with the 12-year-old Omar Salah, the real sweet potato vendor who was shot dead by a police conscript near the US embassy in downtown Cairo, on February 3, 2013.

The death of Salah, according to his father’s personal accounts took place after a conscript stationed by the American Embassy shot the young boy dead. The father added that a brigadier general from the Armed Forces subsequently informed him that a police conscript had asked Omar for LE1 of sweet potato, while jokingly threaten to shoot him with his firearm – when the boy responded “you can’t shoot me” the conscript, thinking his weapon was empty, took aim and shot the boy with two rounds. Egypt’s military spokesperson issued a statement at the time claiming that Salah was shot by accident while he was inspecting his weapon.

The conscript responsible for shooting dead Omar Salah was later sentenced to three years imprisonment after a military court found him guilty of the charges of accidental killing and disobeying military orders.

In the movie, the protagonist, Khaled, is haunted by bad dreams of murder, and is spurred into action in hopes of realizing justice.

The movie’s star actress, Tara Emad, said in an interview that this animated production touches upon the nightmares of Egyptians, evil and “bad things that could transpire.”

The premiere of the 15-minute animated short was scheduled for December 11, and was due to be followed by a second screening on December 13.

“I wanted the film to be screened in the Arab World and Middle East first, so that it is not claimed that we are serving foreign agendas and that sort of empty talk,” Roshdy said. “Now, unfortunately we are going to have to screen it to European audiences first.”

Topics
Related
cinema
The lowdown on Cairo’s 38th film festival: More organized, decentralized and commercial
Rowan El Shimi | From new features to highlights of the program, here's our take on CIFF.
cinema
Tamer El Said and the role of the Cairo International Film Festival
Rowan El Shimi | If it wants to compete as an international festival, the CIFF should aim to support Egypt's local film
cinema
Cairo Film Festival and In The Last Days of the City team dispute screening agreement
The film was withdrawn because it has participated in a large number of festivals preceding CIFF.
cinema
A report on Mohamed Diab’s Clash: How state TV deals with art
Tamer El Said | I’ve never met filmmaker Mohamed Diab and I’ve not watched his new film Ishtibak (Clash,