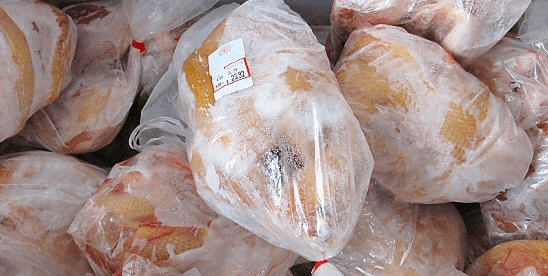 The government decided to reverse a controversial move temporarily exempting imported frozen poultry from customs duties on Monday. The initial decision was issued on November 22, amid deals with Russian poultry suppliers, sparking debate about the implications for the local industry.

Prior to the cancellation, cabinet spokesperson Ashraf Sultan said during a television interview that the decision was well researched, and a temporary measure intended to meet market needs until local production picked up. He added that it was in support of citizens.

However a local poultry producer, who wished to name anonymous, claims: “To our knowledge, the decision would only benefit companies which import frozen poultry from Russia, which currently have products which have been detained at the Alexandria port for some time now.” He poses that this may be why the decision was to be implemented retroactively.

Egypt brokered several poultry importation deals with Russia throughout the past year.

Ahead of Ramadan the Supply and Internal Trade Ministry also contracted Russian producers to import poultry. Khaled Hanafy, former supply minister, told the partisan Al-Wafd newspaper that shipments of 3000 tons per month would hit the Egyptian market in May, followed by monthly installments to meet local demand.

Hanafy added that three international poultry companies were contracted to provide the products, one of which was was charged in 2013 with providing tons of soy lecithin additive of unknown origins.

In August, a Russian producer called Cherkizovo also said that they had sent a 270-ton shipment of frozen chicken to Egypt. The company claimed that total shipments to Egypt would amount to 10,000 tons by the end of the 2016.

The poultry producer is critical of November’s attempt to further encourage imports, asserting “poultry farms sell to wholesalers at LE16, and they in turn sell to retailers at LE17.5. If you add the seller’s profit, you will find that the difference between imported and local products is not big. This is when you realize that government’s claims that the decision will encourage competition and fight the greed of traders is just lip service, to appease people.”

In previous statements about imported poultry Hanafy said that whole poultry would be distributed to all branches of state-owned supermarkets at a price of LE19 pounds per kilo.

According to the poultry farm owner, local producers bear the cost of buying imported feed and maize, which has doubled since the devaluation. Increasing costs have also included electricity, imported vaccines and veterinary supplies and, he says, “despite all this, big traders continue to sell for low prices.”

He asks whether the government is implying that Egyptian traders should sell products at a loss when it pledges to fight merchant greed, questioning what exactly protecting the local industry means. He continues: “In a state suffering a foreign currency crisis, which is more entitled to subsidies, local or imported products? If the state wants to protect people with low incomes it should support farmers by reducing the cost of maize, not increasing the cost of energy, or at least by refraining from decisions like this.”

Nabil Darwish, head of the Unit of Poultry Producers in the Federation of Industries said in a press statement on November 24 that a customs exemption was likely to destroy the local poultry industry, which currently holds a 90 percent market share in the case of chicken, and 100 percent in the case of eggs. The industry relies heavily on supplies imported with US dollars, and as such costs have increased in the wake of the pound devaluation. Despite this, according to Darwish, the industry has 3 million investors and workers, and investments worth more than LE60 billion without any government subsidies.

Addressing the now reversed tax exemption, the poultry producer states: “The government says that we — the local producers — want to control the whole market, as if control by local industry is bad, and has to be balanced by imports.”

AD
You Might Have Missed
What we talk about when we talk about trees
Mugamma revisited: Reimagining the building and the square
Where do old lesbians go to die?
Carbon Colonies & A Green New Deal
AD
Omar Said
82 articles on Mada