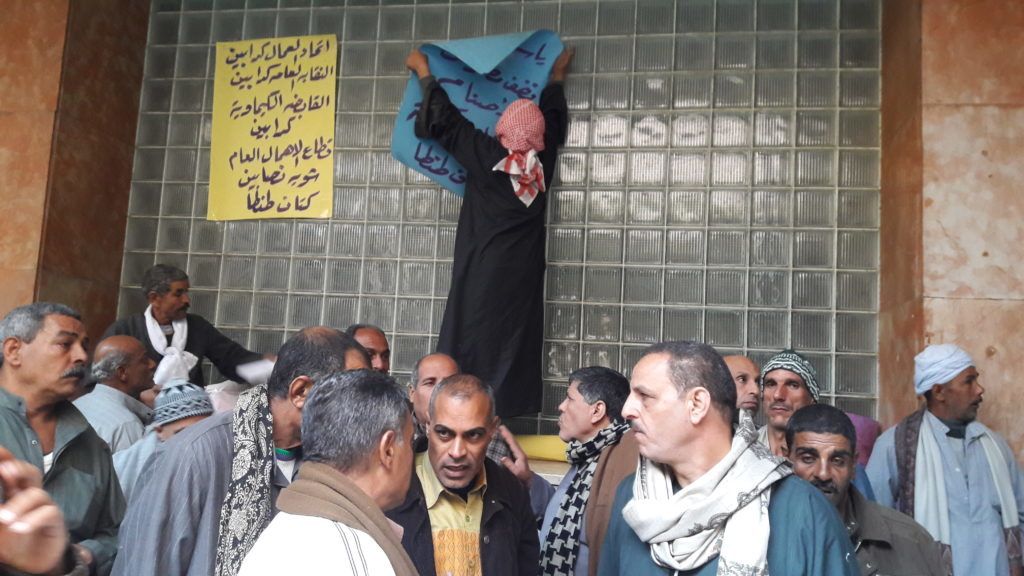 Police arrested a number of workers as they forcefully dispersed two sit-ins at fertilizer companies in Suez governorate on Monday, while in Cairo, a third sit-in by workers at Tanta Flax and Oils Company was called off.

Security forces were deployed early on Monday morning to the town of Ain al-Sokhna to disperse sit-ins involving around 1,000 workers at the Egyptian Fertilizers Company (EFC) and the Egyptian Basic Industries Corporation (EBIC), both owned by billionaire Nassif Sawiris.

Dozens of protesting workers were briefly detained in the crackdown, with two remaining in police custody. Suez-based trade unionist and regional labor organizer Saud Omar told Mada Masr that security forces initially arrested a large number of workers during the sit-in, but later released them, with the exception of Mohamed Hashim and Yasser Geneidy, who were referred to the district prosecutor pending investigations.

The industrial action started 15 days ago, with workers demanding higher wages in light of the flotation and devaluation of the Egyptian pound.

Workers demands at both the EFC and EBIC are the same, Omar explained, as both companies are administered by Sawaris’ management. Workers began protests and strikes after company administrators deducted some of their bonuses, and workers’ grievances increased after the government’s decision to float the Egyptian Pound against the US Dollar early last month.

Both companies manufacture fertilizer products that are exported to foreign markets, which should mean higher profits following the floatation of the pound, as workers highlighted.

Two weeks ago, worker-representatives informed the local office of the Ministry of Manpower that they would embark on work stoppages before entering into collective negotiations with company administrators. However, managers refused to negotiate before the strike was called off and work resumed.

Both companies filed complaints about strike leaders with security forces, according to Omar, who explained that workers resumed their sit-ins on Monday morning, demanding increased wages and the immediate release of their coworkers.

Also on Monday, a delegation of dozens of workers from the Tanta Flax and Oils Company called off their sit-in. Striking workers had been occupying part of the ground floor of the state-controlled Egyptian Trade Union Federation (ETUF), but suspended their action in light of “pressure from security forces,” according to workers.

The sit-in started on Sunday afternoon, as former workers awaited compensation payments from the Ministry of Public Works. Ministerial officials promised pay-offs of LE65,000 per worker in August, in exchange for them giving up their demands to be reinstated in their jobs.

Seeking their end-of-service compensations, representatives of some 243 workers, who were forced into early retirement following the privatization of the company, were due to meet with officials from the Ministry of Public Works on Tuesday. But the meeting was pushed back, according to one of the main workers negotiating with officials, Gamal Othman. Frustrated coworkers questioned Othman’s decision to agree to suspend the sit-in.

“I understand there were threats, along with concerns that the police would storm our sit-in and arrest us. But we’ve accomplished nothing here,” said Othman’s coworker Abdel Aziz Mohamed, who added, “We agreed to give up our jobs in exchange for compensation. Now we have neither.”

According to workers’ accounts, the state-owned Holding Company for Chemical Industries (which currently owns and manages the Tanta Flax and Oils Company) had initially proposed the end-of-service compensations nearly four months ago. But officials said they would only release the payments after receiving clearance from the Finance Ministry that it would cover the full amount of around LE16 million. Spokesperson for the Ministry of Finance, Ayman al-Kaffas, however, told Mada Masr that he had no knowledge of any such agreement.

Over 400 workers were pushed into early retirement following the privatization of the Tanta Flax and Oils Company in 2005. After years of trying to be reinstated, nearly half of these workers are now seeking compensation packages. Many are currently receiving pensions amounting to a maximum of LE700 per month.