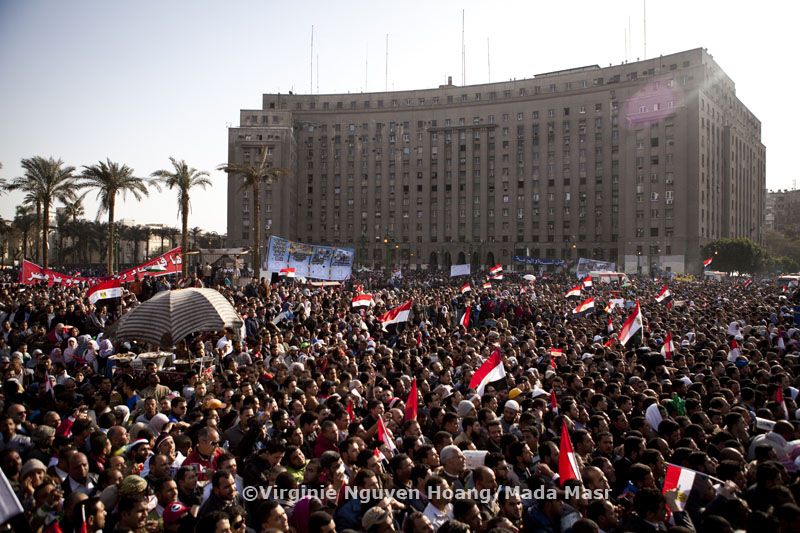 The Supreme Constitutional Court ruled that Article 10 of Egypt’s contentious protest law is unconstitutional, rejecting further appeals against Articles 7, 8 and 19 of the same law during a session on Saturday.

Human rights lawyer Khaled Ali, who filed one of the appeals, said that Article 10 pertained to the Interior Ministry’s power to cancel protests if it found that they may commit any violations of the law. While the protest law originally stipulated that organizers are only obliged only to notify authorities of a planned protest, according to Ali Article 10 technically made this notification meaningless, rendering it a request for permission.

As a result of Saturday’s ruling, the Interior Ministry has no longer the right to cancel protests, it will only be permitted to protect and secure demonstrations without prior intervention.

Essam al-Eslamboly, a legal expert and another lawyer who appealed against the law, told Mada Masr that anyone sentenced as a result of Article 10 will now have the right to present a request before the Public Prosecutor to drop the sentence. However, in cases where a sentenced is based on other articles or laws, the sentence cannot be dropped.

The ruling stipulated that the right to protest is a constitutional right which no executive or legislative authority has the right to obstruct.

Article 73 of the Constitution specifies that: “Citizens shall have the right to organize public meetings, marches, demonstrations and all forms of peaceful protests, without carrying arms of any kind, by serving a notification as regulated by Law. The right to peaceful and private assembly is guaranteed without a need for prior notification. Security forces may not attend, monitor or eavesdrop on such meetings.”

The protest law has been heavily criticized for essentially banning protests and sit-ins, and putting forth strict security measures on the right of peaceful assembly. It obliges protest organizers to inform the nearest police station of the place of the protest, its start and finish times and its goals and demands, in addition to the names and contact information of organizers. The information has to be provided 24 hours prior to the protest, according to the law.

It also prohibits protests from exceeding the planned time, using fireworks, face masks or protesting within the vicinity of places of worship.

Security forces are required to disperse demonstrations first with verbal warnings, then, if necessary by firing water cannons, tear gas and then beating protesters with batons. However, the law stipulates that if it is required for “legitimate self-defense and the protection of assets,” “more force” is authorized.

A number of well-known activists are currently serving prison sentences as a result of the harsh application of the Protest Law since its issuance in 2013. Among them are activist Alaa Abd El Fattah who is serving a five-year prison sentence, in addition to the founders of the April 6 Youth Movement Ahmed Maher and Mohamed Adel and activist Ahmed Douma, alongside thousands of others.

Topics
Related
Sisi pardons
New list of prisoner pardons set to prioritize journalists and patients: NCHR member
The pardons announced last week by Sisi include some detainees and not others on similar charges, and
Alaa Abd El Fattah
Jan 25, 5 years on: The only words I can write are about losing my words
Alaa Abd El Fattah | Five years ago on what would turn out to be the last normal day of my life I sat down at my desk in a
postgraduates
Postgraduate protesters calling for employment arrested
Three protesters were arrested in downtown Cairo taking part in a demonstration staged by postgraduates