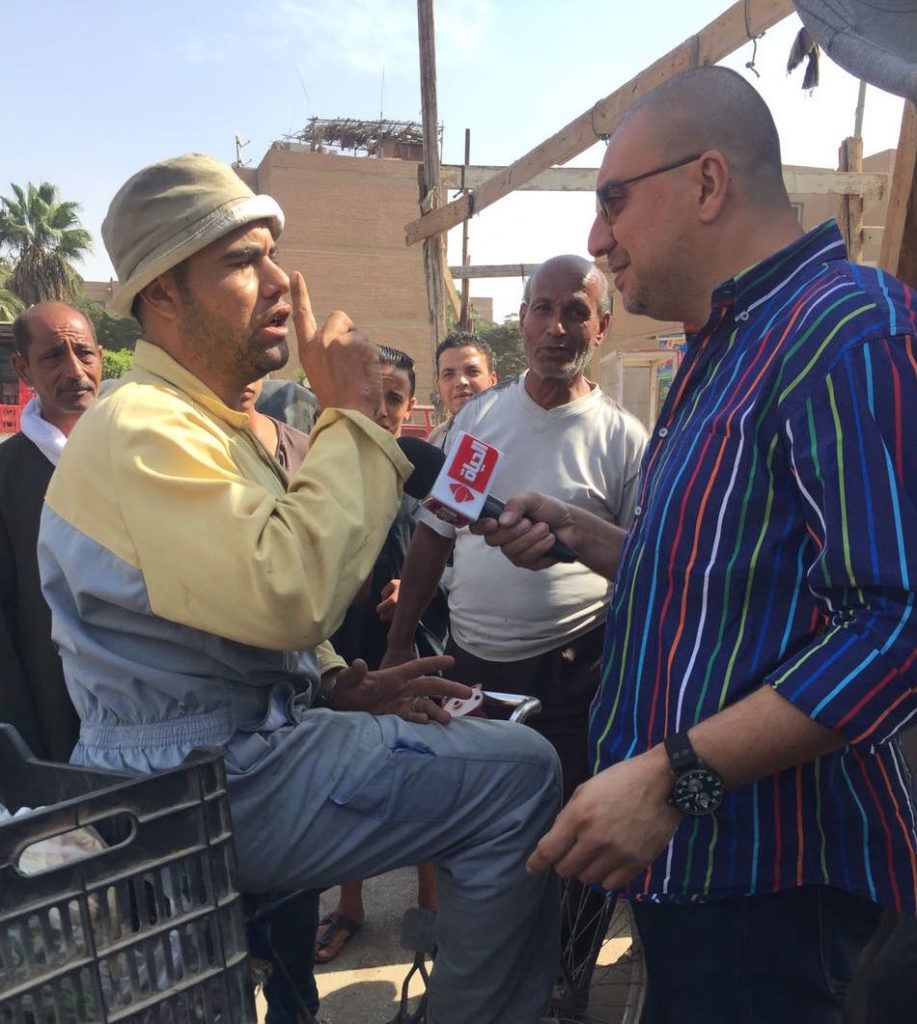 Television host Amr al-Leithy was barred from boarding a plane to Dubai on Thursday, making him the latest figure the Egyptian state has banned from international travel.

Leithy’s travel ban comes one day after Aida Seif al-Dawla, one of the founders of Al-Nadeem Center for Rehabilitation of Victims of Violence, was prevented from boarding a flight to Tunis.

While the ban is similar to many of those that have preceded it, in that it was issued without a justification or official declaration, Leithy is the first person who is not a human rights worker to be banned from travel in the absence of official charges.

Leithy addressed the travel ban on his Facebook page, writing that he was informed that he could not leave the country upon arrival at Cairo International Airport with his family, all of whom were planning to travel to the United Arab Emirates. The television host added that he is unaware of any formal accusations leveled against him, saying he plans to gather further information to challenge the decision through the proscribed legal channels.

In comments made to state-owned Al-Ahram news outlet, Leithy stated that he visited the office of the general prosecutor in downtown Cairo immediately after being informed of the ban, but they did not provide any information regarding the reason behind the decision.

Leithy’s daily television show “Bewodooh” (With Clarity) and his weekly show “Wahid min al-Nas” (One of the People) went off air in October after the latter broadcast an interview with a tok tok driver who decried the government’s economic policies. The video was widely disseminated online after its initial broadcast.

The producers of Leithy’s shows declined to comment when asked whether the travel ban was connected to the October interview.

“I don’t have any information regarding the news. I first learned of it on your website,” one of the producers of With Clarity, speaking on the condition of anonymity, told Mada Masr, reaffirming sentiments expressed in October that the show had gone off air for its annual vacation.

However, the producer acknowledged that he is not sure how long the show will be off the air.

Several other human rights workers were banned from international travel in November without being given prior notice, including Centre for Egyptian Women Legal Assistance (CEWLA) head Azza Soliman, who was banned from traveling on Saturday. On November 15, airport authorities informed Ahmed Ragheb, a lawyer and the founder of the National Community for Human Rights and Law, that he was not able to leave the country.

The Association for Freedom of Thought published a report titled “Boarding stamp: Report on travel bans as a punitive measure from June 2014 to September 2016” this week, asserting that the Egyptian state has issued 217 travel bans – a figure that takes into account Egyptian nationals who have been banned from international travel and foreign nationals attempting to enter Egypt – in the period roughly according to President Abdel Fattah al-Sisi took office.

Twenty Egyptian civil society organization issued a joint statement signed on Wednesday, condemning the four travel bans the government has issued in November in addition to the state’s decision to freeze the assets of several prominent NGOs.

“Travel bans have become a tool of harassment and retaliation against activists working in the public domain,” asserted the statement. “All decisions to impose travel bans – including those issued through judicial order – fail to adhere to the most basic rules of transparency and neglect to inform those banned from traveling.”

The statement called the bans an attempt to intimidate and thereby solicit information from targeted individuals. In cases where travel bans have been justified, the government has appealed to charges of illicit foreign funding.

Article 62 of the Egyptian Constitution guarantees the freedom of movement, residence and migration to all Egyptian citizens, adding that “No citizen shall be prevented from leaving the country, nor placed under house arrest, nor prohibited residence in a specific location, except by a causal judicial warrant, and for a definite period, in those cases prescribed by the law.”

Sameh Samir, a lawyer at the Egyptian Center for Economic and Social Rights, previously told Mada Masr that the Criminal Procedure Code stipulates only two specific conditions under which a citizen may be denied their constitutional right to freedom of movement.

In the first instance, a court may ban an Egyptian national from traveling abroad through an official judicial order, while, in the second, the prosecution may ban a citizen implicated in an open case from traveling abroad pending the conclusion of investigations, which is what has transpired in the case of Seif al-Dawla.