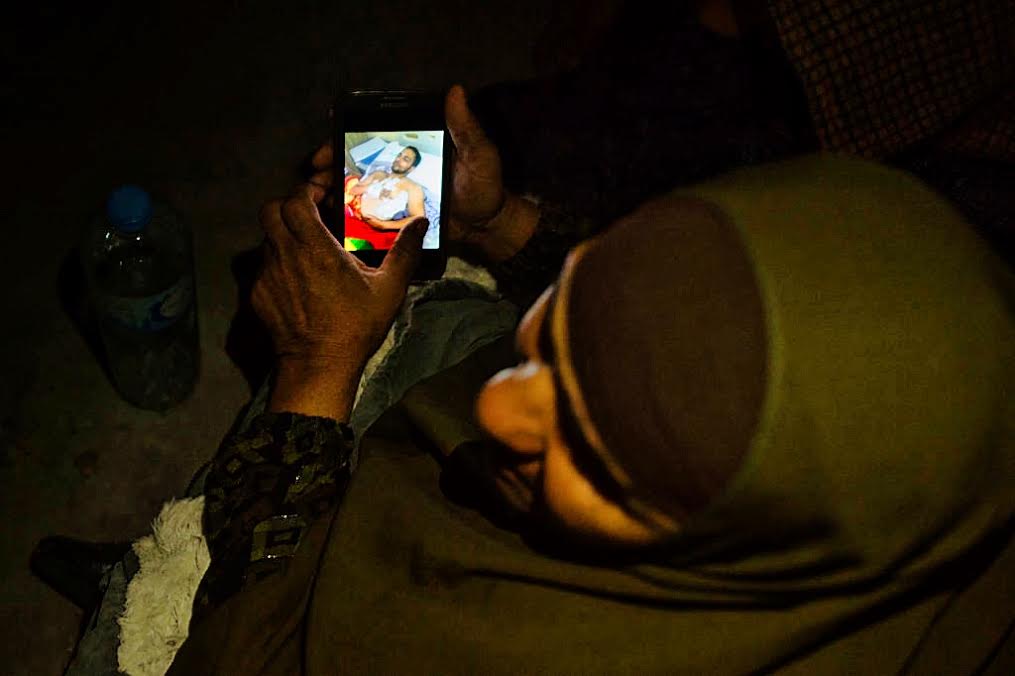 Victim's mother holding a photo of her - Courtesy: Mostafa Bassem

Worker Ahmed Mahmoud was admitted to the intensive care unit of Haram Hospital on Monday morning after being shot in the chest in his home in the Talibiya district of Giza. His family and friends say he was shot by security forces who raided the apartment for unknown reasons.

Mada Masr attempted to investigate the details of the incident and Mahmoud’s condition during a visit to the hospital. However the reporter was ordered to leave by a task force from the Haram police station which was stationed in front of the intensive care unit, preventing journalists from entering.

Mada Masr met with a number of eyewitnesses and the victim’s family members in front of the hospital, and attempted to talk to the one of the doctors following up on the victim’s condition.

Mahmoud’s flatmate Hussein Meselhy said that they were among 10 workers who are all employed at a wedding hall, sharing one apartment to save on rent. He recalled Monday morning’s incident: “I was changing my clothes to go to work, when suddenly I heard a gun fire. I ran to the main hall to find Ahmed prone on the floor and blood everywhere. The apartment was full of masked men, wearing uniforms with ‘special forces’ written on them.”

Meselhy added that the armed men pointed their guns at the apartment residents and ordered them to pile on top of each other. He continued “Ahmed was bleeding and said: ‘Save me I’m dying.’ One of the police personnel told him: ‘Don’t overreact’.”

According to Meselhy, the officers then collected all the bullet casings from the apartment and kept pressure on Mahmoud’s chest until they extracted the bullet and put it in a tissue.

The victim’s parents were in shock. His father said: “We are from Sharqiya, my son is living far away from us, and his wife and kids so that he can send them money.” 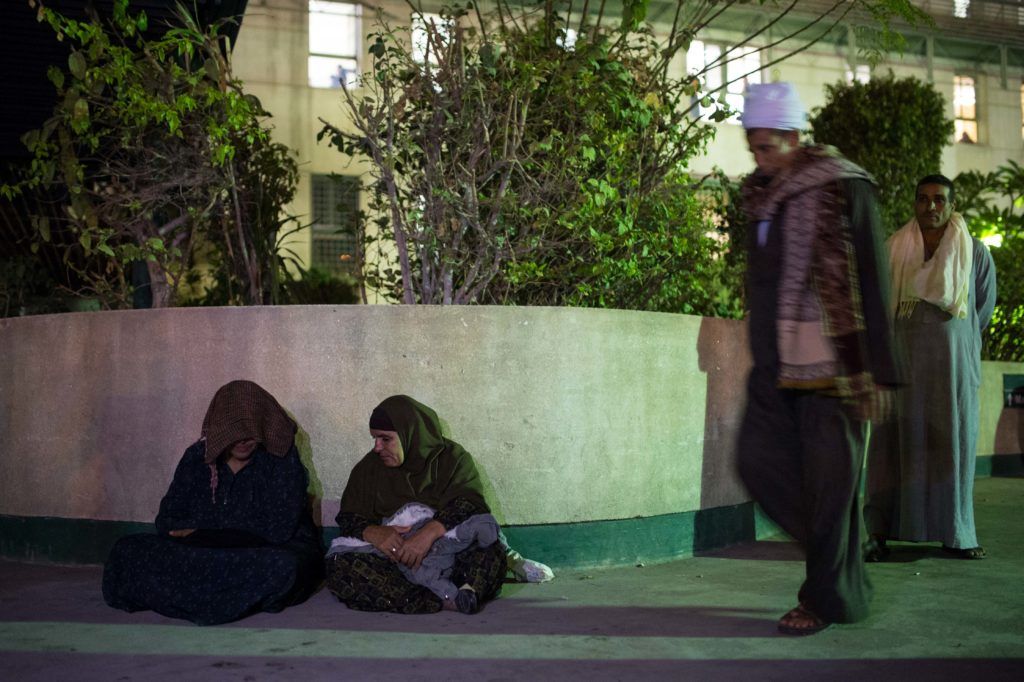 He told Mada Masr they they knew nothing about his current condition, nor why the incident occurred in the first place and that they believe police personnel are pressuring medical staff to keep quiet. “Everytime we ask the doctor about him, security comes and stands with us, so the doctor stays silent, or says that he is ok,” Mahmoud’s father said, adding “of course security is telling the doctors to say this, in order to keep us quiet. We know that he is bleeding, he suffered a lung injury and has been in the intensive care since then.”

He also claimed that they were trying to pacify the family by telling them that the Interior Ministry will cover the cost of Mahmoud’s medical treatment.

They were unable to file an official complaint, or obtain a report from the hospital about their son’s condition. They were instructed to get permission from the prosecution to access the hospital report, however when they addressed the prosecution, they were ordered to go back to the police station, which also refused to register their complaint.

Mahmoud’s father said that they intend to file a report with the general prosecutor’s office, the health minister and the National Council for Human Rights. 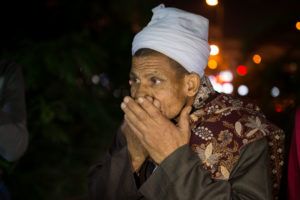 Despite the heavy security presence, one of the doctors following up on Mahmoud’s condition managed to tell Mada Masr: “Please leave. I won’t be able to give you any information now, and you may be harmed. The hospital is full of security.”

On Monday night Mada Masr contacted the doctor, who wished to remain anonymous, by phone. He said that the victim remained in intensive care, attached to a machine which is drawing blood from his injury. According to the doctor it is three millimeters in diameter, however as no bullets were found in his body he was unable to identify the type of shot used.

He claimed that Mahmoud managed to speak for 10 to 15 minutes after he was brought in. When the doctor asked him about his injury, the worker said that security forces “fired live ammunition” at him. When he was informed that no bullets were found in his body, he reiterated his accusations.

The doctor said he was unwilling to speak with the victim’s family due to the heavy police presence at the hospital. One officer allegedly told him to “remain onside.” He excluded the possibility that the injury was a result of pellet shots as there was only one chest wound, consistent with eyewitnesses accounts.

Mahmoud’s flatmates asserted that they are certain officers used live ammunition, as they can differentiate the sound of pellet shots.

Reda al-Zanaty told Mada Masr that he left the apartment building at 6:30 am, when he saw four police vehicles and two central security trucks.  He said: “There were 12 security personnel, when I asked them about the matter, they said they were heading to the fifth floor. Something made me wait and return to the apartment. I found the entire floor in a mess and the apartment’s doors all broken.”

He confirmed Meselhy’s account, claiming that Mahmoud was lying on the floor bleeding while “the rest of my friends were piled on top of each other in a very humiliating way.”

Zanaty added that when the security forces made him kneel on the floor, he heard Mahmoud say “save me,” but one of them kicked him and said: “shut up boy.” 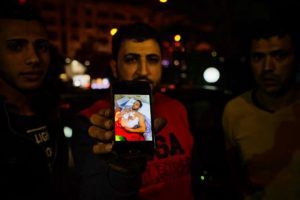 Mahmoud’s flatmates holding a photo of him in ICU

According to Mohamed Mostafa, who also lives in the apartment: “I was in the bathroom and heard gunshots, I thought they were on the street. When I attempted to see what was going on, the door was broken and five police personnel took me to the hall and piled me on top of my friend.”

Mohamed Ibrahim shared a similar account, claiming that the security forces kicked and cursed the residents while they were stacked on top of each other. He said: “We did not understand what was happening. Every time we asked, they told us to shut up so everything would go smoothly. They took our mobile phones and all the money in the apartment. We were piled on each other for two hours while Ahmed was bleeding.” 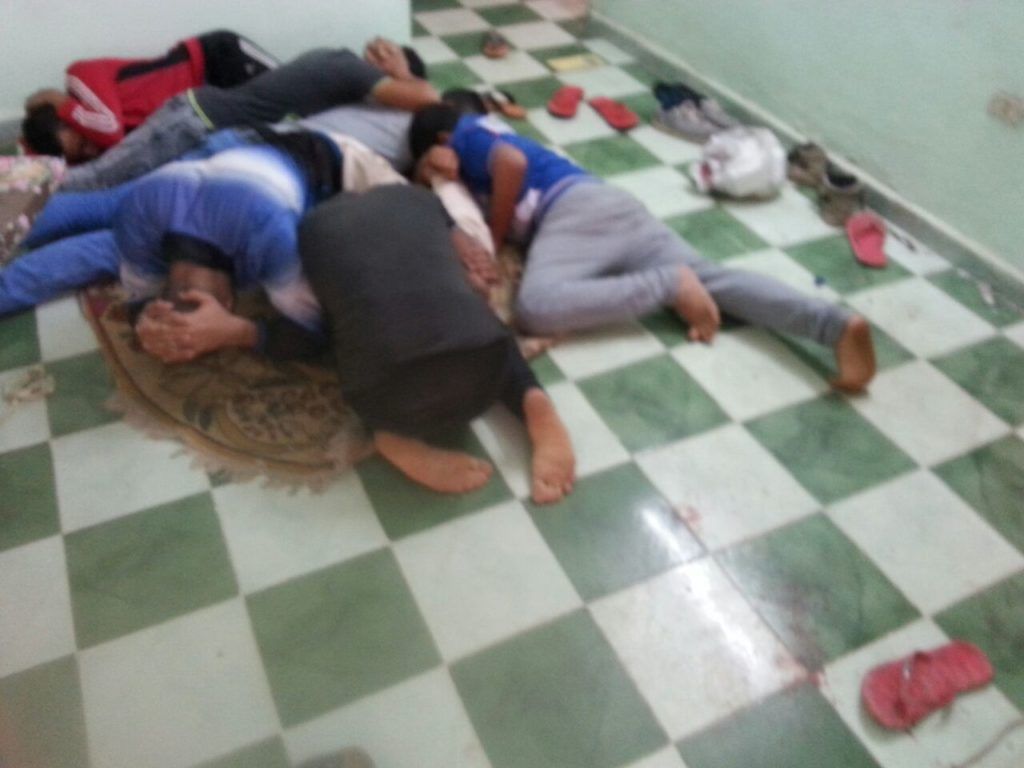 Victim’s flatmates simulating the position security officers forced them into during the raid - Courtesy: Mostafa Bassem

All eyewitnesses said that they did not know the reason for the raid, as no one was arrested. “Is the government protecting us, or killing us?” Zanaty asked, adding, “when we went to the police station, we didn’t know against whom we should file our complaint.”

Mada Masr tried to contact the Interior Ministry’s media office for information on the incident, however no one was available for comment.

“My son is 32 years old. He has a two year old son and his wife is pregnant. He earns LE50 each day,” said Mahmoud’s father. “He is depriving himself from everything to send his wife LE700 to live on, this should not be his end.”

There have been several alleged incidents of violence at the hand of security forces in recent months. Fifty-year-old cart driver Magdy Makeen was found dead in a hospital on Monday in the east Cairo district of Amereya, with his family claiming that he was tortured to death by police. In a similar case, the corpse of medical student Ahmed Medhat was found at Cairo’s Zeinhom morgue on August 30, with his family also claiming that he died while in police custody. On November 16, a police officer was sentenced to life in prison for fatally shooting a tea vendor in April this year.