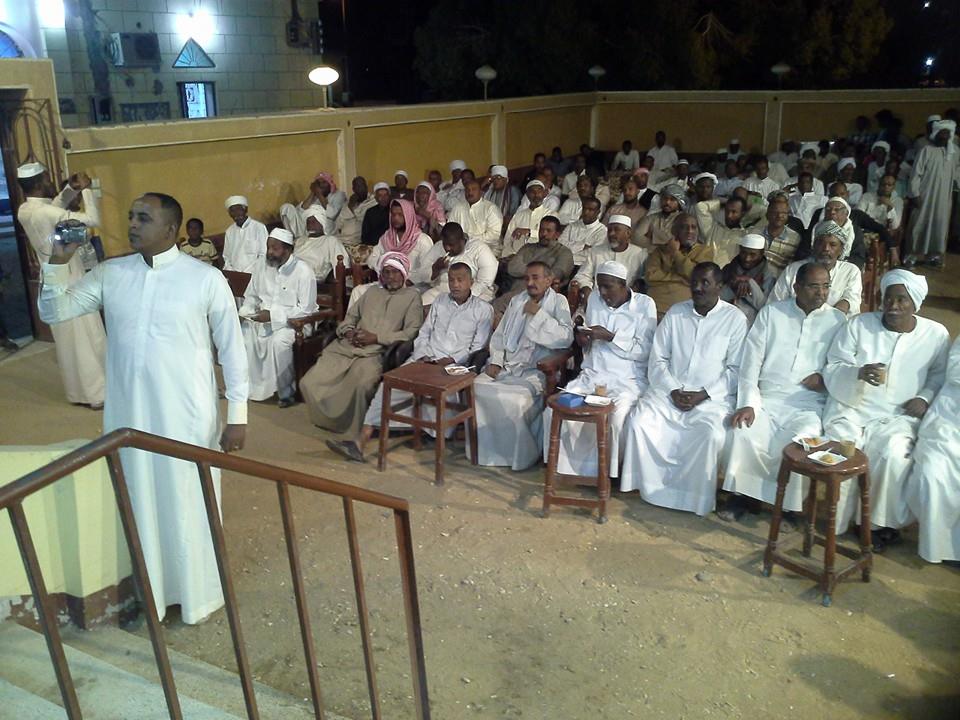 The Nubian protest camp on the Aswan-Abu Simbel Road has rejected a government resolution that would grant priority to Nubians in the sale of land around Forkund village in exchange for an end to their protest.

“The governor of Aswan, head of security and I are in a semi-permanent meeting to follow the crisis moment by moment and to communicate with the concerned authorities to solve the problem before it escalates,” Abdel Sabour said on Sunday.

The Nubians whose 25-car “Nubian Right to Return” caravan was stopped at the start of the Aswan-Abu Simbel Road on Saturday told Mada Masr that they do not plan to buy land that they contend belongs to them.

“There is nothing such as priority to our land. Nobody goes to buy their own land,” Nubian rights lawyer Mohamed Azmy, who is present within the camp, communicated to Mada Masr on Monday.

“The concept in itself is unacceptable because, simply put, Article 236 of the Constitution says we have the right to return within a time frame of 10 years,” she said. “We will not buy. The land is ours.”

Azmy added that Abdel Sabour, whom he says not visited the protest camp, does not represent their interests. “Negotiations will only be held with the president,” the lawyer said, refusing to hold further meetings with security forces who are encircling the camp. Protesters previously met with the military commander of southern Egypt, who attempted to convince them that they were harming Egypt’s tourism industry.

Egyptian media has reported that Parliament Speaker Ali Abdel Aal and former Defense Minister Hussein Tantawi are traveling toward the encampment in accord with Sisi’s direct.

Sources within the camp tell Emam Sakory that security mobilizations suggest that a high-ranking official is expected to visit the camp. However, there has been no confirmation that the movements are connected to Abdel Aal or Tantawi.

The protest camp is 200 kilometers away from the Nubian Forkund village in Toshka, where the protesters were travelling to stage a protest before their progress was halted. The village was recently annexed for a state-backed development project in Toshka, and the caravan embarked after police stopped a previous march toward Forkund to protest the land seizure.

Egyptian authorities besieged the encampment on Sunday, arresting anyone who attempted to enter or leave and denying the admission of food and water.

However, a supply caravan lead by Nubian women managed to break the siege late on Sunday night, entering food and water into the camp, according to Azmy.

Buses left Cairo on Sunday night to join the camp, according to Emam Sakory, with more expected to join on Tuesday. A demonstration outside the Cabinet and Parliament’s headquarters in Cairo stalled after it failed to receive permission from the Interior Ministry, she added. However, activists are making preparations for other planned action.

Sisi has issued two decrees which have recently provoked the ire of Nubians, who have long been subject to state violence.

In August, he passed decree 355, designating 922 feddans of state-owned land to the new Toshka development project. Much of this land falls within historical Nubian sovereignty, and, under the terms of the decree, Nubians will not be granted rights to its exclusive use.

In 2014, the Egyptian president issued decree 444, which was later passed by Parliament, designating certain border areas as military zones that are not to be inhabited, a decision that affected 16 Nubian villages.

Nubians in southern Egypt have been forcibly displaced a number of times in the 20th century: first by the British occupying force in 1902 to build the Aswan Low Dam, subsequently when the dam’s height was raised on in 1912 and 1933 and again with the building of the Aswan High Dam by former President Gamal Abdel Nasser in 1963-64.

The Egyptian Constitution stipulates that the state must make progress in granting Nubians the right to return to their lands within 10 years of ratification, in addition to developing Nubian land and preserving Nubian culture.

Topics
Related
land expropriation
Egyptian authorities besiege Nubian protest camp on Aswan-Abu Simbel Road
Egyptian authorities have halted the movement of people and supplies in and out of the protest camp.
Nubian rights
Authorities prevent Nubian protest from reaching Nubian village for 2nd time
Egyptian authorities have prevented a Nubian caravan of cars from moving into Toshka in Aswan for the
Nubian rights
Nubians may turn to international courts to guarantee return to their lands
Mai Shams El-Din | “We've reached the stage where we are unable to deal with the government.”
Nubians
On the edges: Nubians still live in the shadow of displacement
Dina Sayedahmed | The forced displacement of Nubian communities continues as villages are classified as military zones.