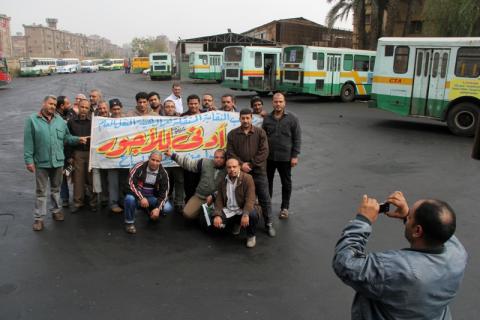 “I want to be able to give my son something when he asks me. I am not asking for something impossible. If I ask to spend the summer [in a resort] you can tell me no, but I ask to eat and drink … We need you to pay attention to us Morsi,” he said, concluding his speech by imploring former President Mohamed Morsi to acknowledge workers’ demands.

The president responded swiftly, deploying six police generals and 12 police trucks the same day to the Imbaba garage to arrest Beheiry for inciting strikes. As he prepared to hand himself over, Beheiry’s colleagues chanted “We are all Tarek.”

Three years after Morsi’s ouster, in September 2016, public transport workers again stated their intention to strike. President Abdel Fattah al-Sisi’s response was even swifter than Morsi’s. Security forces arrested five trade union leaders on September 23, the day the strike was planned to start, and Beheiry was summoned to the National Security Agency’s headquarters.

The six workers disappeared, with no one aware of their whereabouts until September 29, when they were found in Tora prison. Around the same time, news reports circulated about the “fall of a Muslim Brotherhood cell at the Public Transport Company inciting a blockade on transportation in the country.” The prosecution kept the six workers in detention, where they remain today pending investigations into charges of belonging to a banned group. On November 17, the wives of the detained workers went to the National Council for Human Rights amid a solidarity campaign for their husbands.

This is not the first time public transport workers have made demands and been accused by authorities of conspiring against the government.

A conspiracy under SCAF

On February 9, 2011, as millions of protesters rallied against former President Hosni Mubarak, public transport workers declared a strike in a number of garages. They demonstrated nationwide, demanding a fair minimum wage, an increase in their allowances, the transfer of responsibility for their public sector company from Cairo governorate to the Ministry of Transportation, improved healthcare and the resignation of corrupt company leaders, as they had done many times before the 2011 uprising.

Mubarak resigned without responding to their demands. The Supreme Council of the Armed Forces (SCAF) who took up leadership of the country, antagonized workers, referring trade union leader Ali Fattouh to a disciplinary trial for making press statements in violation of the law. Transport workers demonstrated on June 25, 2011 in front of the State Council in solidarity with Fattouh. The court acquitted him.

The workers demanded SCAF match a 200 percent incentive reward, which other state service sector employees had received, according to the 2011 budget SCAF released. Their demands were rejected and the independent union called for a strike on August 28, 2011. The strike was delayed after SCAF promised they would be included in the incentive scheme, but after waiting in vain, they organized a partial strike on September 18, 2011.

After two days of strikes, chairperson of the company Mona Mostafa informed workers they would be included in the reward scheme, with workers insisting she put this in writing and distribute it to the company’s garages. The union consequently announced the end of the strike.

On the evening of September 20, 2011, workers not on the night shift headed home happy with their victory. After two days they heard on television that the incentive payments would not be in their next paychecks, as the Finance Ministry was still reportedly to determine what it would do.

The workers responded quickly, announcing a general strike in all garages the following day until their demands were met. After a few days with no response, hundreds of workers organized protests in front of the Cabinet. On September 27 and 28, Cabinet officials met with a group of workers’ representatives, who agreed to suspend the strike for 10 days to give the Ministry of Finance time to study their demands. However, the workers in the garages refused to suspend the strike in the absence of a clear decision or guarantee that their demands would be met.

On October 4, 2011, the workers decided to end the strike after former Prime Minister Essam Sharaf announced the allocation of LE128 million as an alternative incentive to the reward scheme, promising further negotiations to address the end of service honorarium and the transfer of affiliation of the company. However, by the time the prime minister’s fund was allocated, it was reduced to LE45 million.

On February 6, 2012, the workers submitted a demand to the Ministry of Labor that their end of service honorarium be increased. While they had some support from the minister at the time, officials continued to ignore their demands.

This prompted another partial strike, slated for March 13, 2012. The partial strike became a general strike on March 17, 2012, including demonstrations in front of Parliament. On March 22, 2012, workers refused a decision by the governor to increase the end of service honorarium to a month and a half for each year of employment. The following day, the Armed Forces began operating their own vehicles to challenge the strike.

On March 26, 2012, Parliament discussed the workers’ demands in a joint meeting with the minister of transport, the governor of Cairo, the head of the company and workers’ representatives. The meeting concluded with an agreement to increase the end of service honorarium to two months per year of service, up to a maximum of 72 months. The minister of transport also promised to prepare a legal and technical study concerning the transfer of the company to the authority of the Ministry of Transportation. However, Parliament was dissolved by the High Constitutional Court on June 16, 2012, putting negotiations at a stale mate again.

A conspiracy against the Brotherhood

SCAF was gone and along came Morsi. The workers prepared a comprehensive study of the company’s problems and submitted them to state officials, to no avail.

As the new academic year started, three garages announced a strike on September 15, 2012, with other garages following suit. The next day, workers’ representatives met with Rashad al-Matiny, minister of transportation, who refused to transfer responsibility for the company to the ministry, although he promised to facilitate negotiations with the Cairo governor concerning the rest of their demands. Shortly after the end of the meeting, police tried to arrest Beheiry, who was at one of the striking garages, but workers resisted.

On September 19, the Armed Forces once again tried to break the strike, operating 40 of their buses in several areas. The following day, the workers escalated their protest, with bus drivers commencing a hunger strike.

A conspiracy against June 30 and Sisi

Morsi was ousted and interim President Adly Mansour was appointed by military leaders in July 2013. His government, headed by Hazem al-Beblawi, announced the implementation of the national minimum wage for workers, and promised transport workers this would start in January 2014.

Two days after the strike began, Beblawi’s government resigned, and the Armed Forces deployed their buses again to challenge the strike.

On the fifth day, the workers suspended their strike after the head of the company, Hesham Atteya, announced an agreement had been reached to distribute in-kind incentives at a minimum value of LE200 to each worker, beginning March 1. It was agreed that the days of the strike would be counted as working days, and wouldn’t be deducted from their wages. Workers were also promised they would not be targeted by security.

Two years have passed since these promises were made, and no demands have been met. Workers determined to call for another strike to coincide with the beginning of the academic year, in September 2016. This time, the state accused them of a “Brotherhood conspiracy.”

AD
You Might Have Missed
Mugamma revisited: Reimagining the building and the square
Where do old lesbians go to die?
Carbon Colonies & A Green New Deal
What we talk about when we talk about trees
AD
Haitham Gabr
3 articles on Mada