Why bother archiving if we can’t change our own perceptions?

Visual archiving has become a ubiquitous vocation in Cairo in recent years. From workshops on how to read our pasts, to works that take the archive as their basis, to attempts to propose counter-narratives of traumatic events, the acts of gathering, annotating and examining images have become a national obsession.

It’s a common view that archiving is a way to resist a monopolization of history, and this is partly why it has become so prevalent. But because we often pre-read an image before seeing it — especially if we know it comes from a conflict zone — archiving can also help reduce images to mere catalysts or “templates.”

One argument is that this process of making an image a template is tied to the proliferation of cheap digital technology during the 1990s and early 2000s. In previous centuries, images from conflict zones often came as shocks, revelations or evidence preceding textual information, but by the 2003 invasion of Iraq, conflict images had developed their own vocabulary.

Speaking alongside Egyptian filmmaker Tamer El Said in Cologne last month, filmmaker Madhusree Dutta, founder of Majlis, a center for rights discourse and multi-disciplinary art initiatives in Mumbai, explained this problematized perspective on working with archives. Although she has worked to build an indigenous image archive in the contested zone of Kashmir on the Indo-Pakistani border, Dutta recognizes that resistance, especially in the virtual world, has become a commodity.

Said, co-founder of Cairo’s Cimatheque, which is building a film and video archive, seems to agree: “Collecting images during very severe moments of change can sometimes create a fake narrative,” he says, adding that it is important to doubt even the images we take ourselves. As an example, he says most films about the Egyptian revolution he’s seen portray a very different reality to what he saw on the ground during the 18-day uprising.

Said’s recent film, In the Last Days of the City, tells the personal story of a filmmaker’s polarized relationship with a decrepit Cairo. Although the film is about the 2011 uprising, it takes place in the few years prior and avoids addressing pivotal moments of change head-on, preferring instead to portray the quiet deadlock that comes before an outburst. 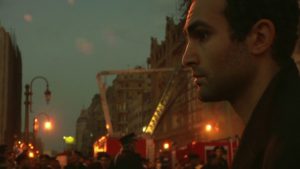 Likewise, Dutta’s 7 Islands and a Metro (2006) addresses the relationship of Mumbai residents to their city. Mixing documentary, fiction and installation, it is a beautifully complex portrait of a multilingual megalopolis that opens with the lines, “Maybe this Bombay is not that Bombay. Or this is the real Bombay and others are not.”

Hearing these two filmmakers prompts the idea that perhaps all images are real and unreal. Perhaps the belief that a photograph can steal your soul is true: versions of ourselves and our cities begin lives of their own that we cannot affect nor intercept.

Said screened two video segments: a home video of two young men and a woman driving along the coast of Alexandria, and a 1989 BBC documentary about life in Egypt.

The silent vacation video gives no context, just the body language of the characters from which to infer their relationships. In contrast, the BBC “Egypt Today” documentary is overlaid with a smooth female voice track describing the mundane lives of the Egyptian family seen onscreen, assuring British audiences that they have a television, a fridge and a modern cooker, and shop at a store that “sells the same range of goods as the local grocery shop in Britain.” But wait — the family only has meat two or three times a week, and because their flat only has two rooms, the three siblings must share a bed.

The BBC program seemed to me evidence of postcolonial theorist Homi Bhabha’s notion that the colonized Other (with a capital O) must remain “almost the same, but not quite” — a “colonial mimicry” outlined in his essay Of Mimicry and Man: The Ambivalence of Colonial Discourse (1984). The Other must be relatable enough to be understood, but exotic enough to be observed from afar; integrated enough to function within the socioeconomic system, but marginal enough that it constitutes no real threat.

Ekaterina Degot, artistic director of the Academy of the Arts of the World where the discussion was taking place, said that for those who are marginal and want to be represented in the “center” — the West — producing images of regions where conflict is taking place might become a chance for that kind of representation. As long as the center of image consumption continues to be the Western world, Degot said, image-makers elsewhere are stuck between self-exoticism (pandering to well-known image templates and presenting themselves as Other), and self-colonization (mimicry and presenting themselves as “just like you”).

“Images can create a stereotype about a culture or people,” said Said. “Then the people who belong to this culture adopt this stereotype and reproduce it, and it becomes a way of communicating with one another.”

But our perception of both the home video and the BBC documentary was flawed. The home video lacked context and the BBC gave us too much, constricting us to the narrow vision of its producers.

During her time in Kashmir, a local newspaper photographer bequeathed Dutta his collection of 700 photographs — kept hidden in a kitchen sack for fear of being accused of sedition by the Indian state — which became the basis for Majlis’s archive. The photographer’s captions — “Non resident beggars obstruct the passage of wayfarers,” and, “These women beg during the day and split their earnings between them” — give much-needed context, but also limit our understanding. By telling us what we’re looking at, they confirm that the archive is reality, bestow it with accuracy and power. 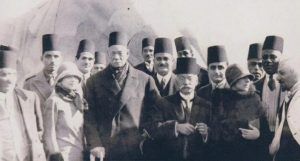 Dutta also showed a series of mundane images from a Kashmiri village. A dusty road. A lonely tree. A rusted gate. It turned out that these photographs recreated the routes of the funeral processions of militants killed fighting for an independent Kashmir. They were taken by an old man with a cheap digital camera, working when the streets were empty for fear of being marked as a resistance supporter. The photographs did not correspond to “templates.” Without context we were able to consume them filter-less, but they were also rendered meaningless — until we were told what we were seeing.

Dutta hailed this as an innovative way to archive and remember conflict, and insisted that the reading end of the archiving process must be “kept supple and open,” in order not to “freeze the image.”

Seeing the images of a funeral presented in this way, with a lag between the visual input and the context, somehow liberated us from the tragic or morbid filter we might normally see them through. Those few seconds between seeing and being conclusively informed about what you’re seeing are key — they allow your mind to wander and make associations, so that when you’re given context (which is necessary with these photographs, because there is no action taking place) your perception of the image is enriched by the associations you’ve recalled from your mind’s visual archive. Of course, we don’t always have the luxury of creating this lag, because sometimes you’re viewing an image alone, as opposed to being shown it in a presentation.

One way of trying to break out of image templates and create a context where images can be received and perceived differently lay in the initiative under which this discussion was taking place: Pluriversale, a series of artistic events on colonial legacies, conflict and migration running through December 6 in Cologne. At the heart of Pluriversale’s ethos is the desire to create an environment which challenges “the overwhelming logic of global finance and neoliberal force,” and “supports and presents things that are not supported by the market,” as Degot told me. And on a small scale, they succeeded in providing this space for alternative viewing.

In a poignant scene from Said’s In the Last Days of the City, the protagonist witnesses a moment of violence while cooped up in his downtown apartment, struggling to edit his film. A man is beating and chasing a woman through the abandoned lot downstairs. Khalid tenses up, breathes deeply, and walks abruptly out of the frame. We assume he’s going to get involved, to stop the man. But he returns with a camera and points it directly at him. “What the hell do you think you’re doing?” the man shouts up when he sees the camera.

Indeed, we could all ask ourselves the same question. Why do we care so much about images and annotations? What power, authority or comfort do we imagine they provide? Even if we cannot formulate personal answers now, we should at least learn to look at the images we gather with an eye that is more nuanced than nostalgic, as reels and not resistance.

AD
You Might Have Missed
Where do old lesbians go to die?
Carbon Colonies & A Green New Deal
What we talk about when we talk about trees
Mugamma revisited: Reimagining the building and the square
AD
Lara El Gibaly
31 articles on Mada

Topics
Related
Ammar Abu Bakr
Keeping the story of Hisham Rizq alive: The art and aims of Shams al-Maghib
Chitra Sangtani | Shams al-Maghib have created a model of working together that can endure through its flexibility, and
archives
The stolen library: Syrian artists poetically archive Arab publishing
Rowan El Shimi | It’s a thunderous evening in East Berlin. A dented, chipped metal door is propped open, inviting passersby
archives
Empty archives: What do we do with what we do not know
Laura Cugusi | In the era of hypervisibility the invisible is acquiring a new relevance in the dynamics of power that
archives
Social media as archive
Laura Bird | Alongside many pages sharing contemporary imagery for political and entertainment purposes, several social