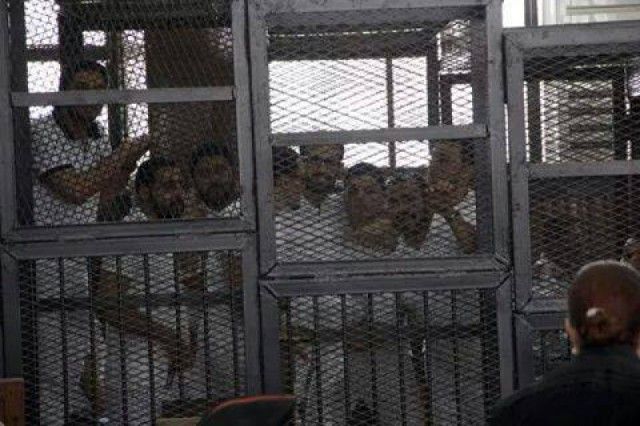 A committee formed by Egyptian President Abdel Fattah al-Sisi to prepare names of political detainees for potential release has drawn up an initial list of 83 suggestions, including Islam al-Beheiry, Fatma Naout and Ahmed Naji, according to a committee member.

The list, which will be reviewed by Sisi, mostly consists of students, according to a Facebook post by committee member Nashwa al-Houfy, who added that it includes Beheiry, Naout and Naji.

According to committee members, the review period for the presidential pardons has been extended beyond the initially announced date of November 20, with no new deadline announced.

On Sunday, several members of the committee, including MP Tarek al-Kholy, told local media outlets that the first group of detainees is expected to be released within 48 hours.

While committee chairperson Osama al-Ghazaly Harb maintained that they would not consider the political affiliations of detainees in compiling the lists, Kholy said they would not include members of the banned Muslim Brotherhood organization.

Sisi announced the initiative to release a number of political detainees during a youth conference in Sharm el-Sheikh in October, in response to ongoing demands from organizations for the state to reconsider the cases of young people arrested under Egypt’s controversial protest law.

In comments made to the press on Wednesday, Kholy indicated that the committee is reluctant to release Brotherhood members for fear they may become involved in violent acts, according to the privately owned Al-Masry Al-Youm newspaper.

In remarks to the same newspaper, Harb said that there is a difference between someone who is already a member of the group and another who is accused of belonging to the group.

He added that the committee is not excluding any detainees from the lists on the basis of involvement in particular cases, the charges they face or political affiliations, explaining that the only criteria for exclusion is involvement in acts of violence or terrorism.

The committee was initially expected to finish its task by November 20, and to present two lists to President Abdel Fattah al-Sisi for consideration.

One of the lists is to include those jailed pending investigation, detainees with medical conditions, minors and those with sentences that can be appealed. The other list will be made up of prisoners who were given final sentences.

The committee has not been given permission to examine the cases of detainees with final sentences, but is intending to ask for this, according to Kholy.

Suggestions of prisoners for release were submitted to the committee from the National Council for Human Rights (NCHR), the parliamentary Human Rights Committee and a number of political parties and syndicates.

A list of detainees who were jailed pending investigation will be sent from the committee to the prosecutor general for review, Kholy explained, and those with non-final sentences or ongoing cases will be considered as part of an amnesty law being drafted by the Justice Ministry.

Houfy also told Al-Masry Al-Youm that the committee is concerned primarily with looking at the cases of jailed students, so as not to jeopardize their future, with the condition that they were not involved in violent acts.

The committee is also reportedly looking into cases of journalists jailed in cases related to press freedoms, as well as female prisoners, she said.

The committee has a website to enable the families of detainees to fill out forms concerning the cases up for review.

Topics
Related
Sisi pardons
Presidential pardons disappoint political prisoners
Coinciding with the first day of the Eid holiday on Monday, the Egyptian government began releasing prisoners
families of detainees
Released prisoners advocate for those they left behind
Several recently released prisoners, their families and lawyers asserted on Tuesday that they would continue
prominent detainees
525 prisoners freed for Eid
Egypt freed 424 prisoners on Friday following a presidential pardon issued in honor of the Eid al-Fitr