Sunken Cities: The lure of underwater worlds and a critique of a blockbuster exhibition

The idea of the sunken, of things that have been drawn below the water’s surface, holds an inescapable intrigue. Despite modern advancements in sea exploration, the underwater world still resonates with a sense of secrecy, danger and inaccessibility to us land-beings. Waves can swallow, make things disappear and then re-appear elsewhere, and erode. In this way histories can shift, get erased or become the site of future discovery.

The disappearance of the ancient Egyptian cities of Canopus and Thonis-Heracleion is said to have been caused by gradual subsidence into the Mediterranean, accelerated by a series of earthquakes and tidal waves. The two cities were discovered off Egypt’s north coast, in Alexandria’s ancient eastern harbor and, 30km east of Alexandria, the Bay of Abu Qir.

For me, a foreboding feeling underlies living in Alexandria. Problems of drainage infrastructure and real-estate corruption seem to be spiralling out of control and have been responsible for serious floods over the past two winters. Largely due to a major six-lane highway and other irresponsible building projects along the corniche, there is less beach and more coastal erosion. The resulting steepening of the seabed’s profile means storms can reach farther into the city. It feels like the sea is getting closer and closer, and it is not hard to imagine the city being destined to an underwater fate of its own.

Attracted by this alluring, uncanny link to Alexandria’s recent floods, I decided to check out an over-priced exhibition at the British Museum about the excavation of the two ancient cities by French underwater archeologist Franck Goddio and his team while I was in London last month.

The underwater excavations that began in 1996 were completed in 2012, and uncovered objects dating back to the 7th century BC. The act of “discovery” creates a startling connection between a point in the present and a historic past: In this case, while post-revolution chaos saw ancient artefacts being looted and traded, a new city was being found or “rescued.” History was emerging, and elsewhere it was being scattered and lost.

However, after asking around, my feeling is that for many Egyptians any relationship to the excavations was quite remote. People retained an awareness of the event as it made a small wave through social media and the news, but knowledge of what objects were found, and what this revealed about the former cities, is rather vague. This is partly due to the fact that greater, more immediate waves were occurring in society and politics at this time. Nonetheless, it brought to my attention the fact that many excavations make little connection to the people living around the site.

The exhibition currently showing at the British Museum is supported by British multinational oil and gas company BP. Organized by the Institut Européen d’Archéologie Sous-Marine in collaboration with Egypt’s Ministry of Antiquities, Sunken Cities presents 300 artefacts — a mix of loans from Egypt and items that already existed in the British Museum.

The retrieval of the ancient remains was documented on film, from their underwater environment to their emergence out of water and onto the ship. This is presented as a series of video panels through the first half of the exhibition. Voiceover narration and interviews with archaeologists feature big empty sentences, borrowing from a Discovery Channel rhetoric: “Spectacular discoveries are transforming our understanding of the unique significance of these cities,” the voiceover says. Yet there is nothing particularly transformative about the information provided: It does not change or add to existing narratives about Egypt at this time, and Egypt is again presented as an object to be “discovered” and “rescued” by experts from outside. 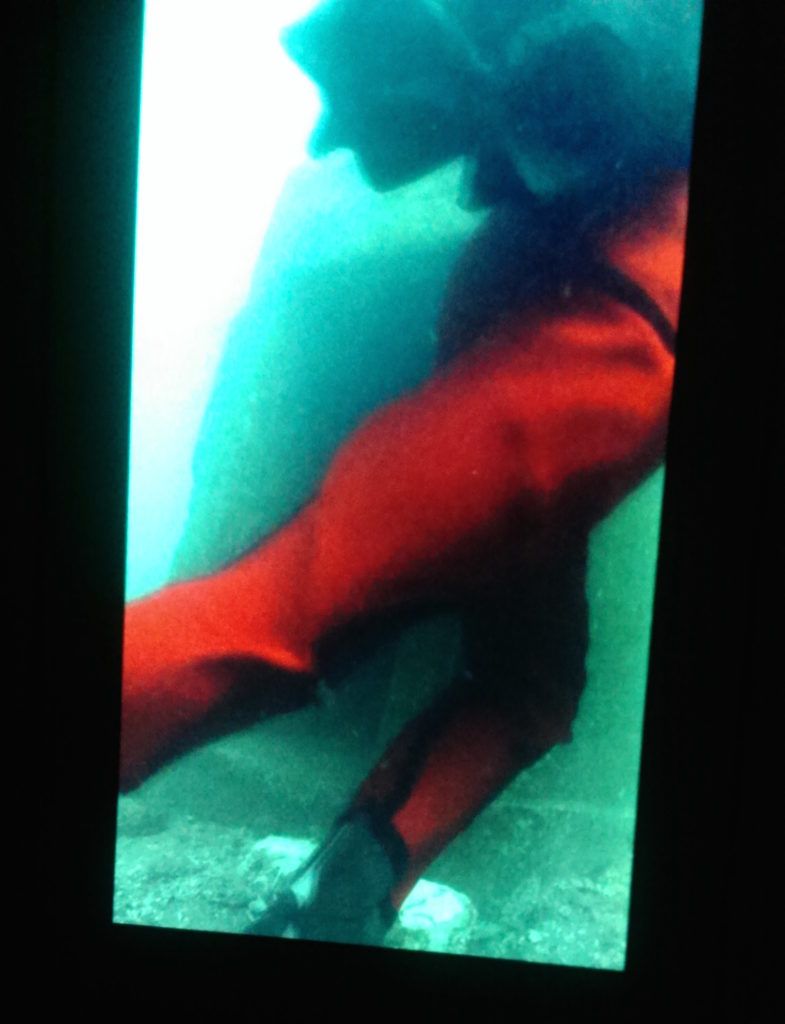 Despite this, I found myself captured by certain scenes. Underwater shots of masked divers in bright red suits are wonderful and absorbing. They silently glide around, inspecting the ancient objects and holding them up to the camera. Their movements are clearly staged, yet as characters they are very enigmatic. I found beauty in they way they carry out the task of traversing between the land of the sunken, and that of land and life. Occupying a liminal existence at the boundaries of the water, they seemed not quite human.

In the second half of the exhibition there is also an impressive three-channel video that presents objects employed in the mortuary rituals and processions around the death of Osiris. They are shown in a sequence, all suspended in murky water through artificial, eerie CGI. The effect is chilling, and gives the impression that the real secrets of these objects are impenetrable.

The story of the lost cities is told from the transition to Ptolemaic rule after Alexander the Great arrived in Egypt. Throughout the exhibition, the integration of Greek and Egyptian cultures is emphasized, and fills out an already established picture of Egypt at that time: That it was a place of “cosmopolitanism” and tolerance, when the Greeks created a unification between their beliefs and that of local Egyptians. Some objects used to exemplify this are interesting: A collection of amulets mass produced in Thonis-Heracleion include scarab beetles, the eye of Horus and, strangely, “black African heads that catered to Greek ideas of exotic Egypt.” These are said to have been exported as far as Spain and Russia, suggesting that it was in Egypt becoming a hub for international commerce that Egyptian art first began turning into a pastiche of itself.

The impression of being submerged was an obvious choice of theme for the exhibition, and is evoked through blue walls, minimal decor and ambient lighting. Supporting this, the speakers patter out the sound of moving water layered over Indiana Jones-style tribal drumming. The stimulation of an old-school fantasy-adventure experience is amusing, but sits at odds with other elements of the immersive installation, which are altogether a bit sleek and corporate-looking – too many HD screens and not enough real mystery. The show is very much a show, but one that claims to be more spectacular than it really is. The objects themselves, along with the intrigue and beauty of the story of the sunken cities, become lost among cold, high-tech apparatus. 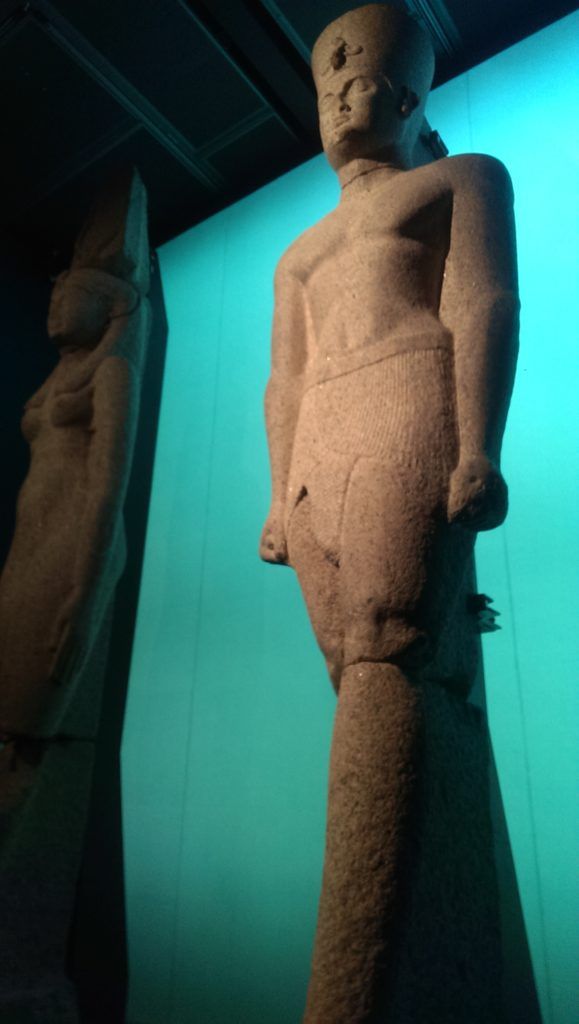 In the end it felt slightly depressing to stand in front of a 5.4m granite statue called Hapy, unearthed from underwater rubble near to my home, now erected in the British Museum. Once worshipped as a personification of the Nile’s flood, Hapy now greets visitors upon entrance to this blockbuster exhibition. In light of his former significance, his new role and context made me uneasy, and acutely aware of the absurdity of the whole system in which objects of history are found and moved around the world. Their displacement from their origins and re-contextualisation within a museum is a violent act, but seems largely accepted as the natural movement of objects toward greater value.

Indeed, Hapy is worth more money standing at the entrance of Sunken Cities than underneath the seabed, or perhaps anywhere in Egypt for that matter. It’s a strange sea of monetary flows pushed by the history and weight of powers such as the British Museum and BP that has brought him and other objects to wash up on London’s shore.

In an attempt to discourage the renewal of the British Museum’s five-year contract with BP, a protest by the theatrical group“BP or not BP” took place in the museum during the exhibition. The Facebook invitation to the protest denounced the fact that while BP are sponsoring an exhibition about the sunken cities, “they are also creating the sunken cities of our future.” This bizarre paradox was acted out through an equally bizarre musical theater performance in the museum’s entrance hall, in which BP was incarnated as sea-poisoning pirates who were chased out of the museum by mermaids. As a major fossil fuel burner, the company is held responsible for large contributions to climate change, and as a result rising sea levels. “Over the decades to come,” the protest group added, “densely populated, iconic cities around the world from Alexandria to London could also become sunken cities.”

Returning to present-day Alexandria, other waves of capital interest and political power are indeed filling the cracks of the city, until it becomes a usual occurrence to see heritage buildings go under.

The dealings of a tangled network of corruption and its political arms, commonly referred to as Alexandria’s “real estate mafia,” leaves listed buildings to the hands of the market and its seas of investors. Embedded with holes and obscured agendas, this system of formal and informal powers is one through which flows of capital force their way into the city with shiny promises of development and regeneration. But in the end we find that beneath such seas there are no glittering secrets, no caves of inscriptions to tell us where we come from, but instead the bare bones of an apparatus that vaguely resembles our image.

AD
You Might Have Missed
Carbon Colonies & A Green New Deal
What we talk about when we talk about trees
Where do old lesbians go to die?
Mugamma revisited: Reimagining the building and the square
AD
Chitra Sangtani
3 articles on Mada

Topics
Related
cultural heritage
Keeping track of the artifacts: On the Egyptian Museum’s Registration, Collections Management and Documentation Department
Meredith Brand | A look at the Egyptian Museum’s remarkable Registration, Collections Management and Documentation Department.
creative writing
Recognizing the lotus
Chitra Sangtani | Why we should draw more pictures and steal more symbols
Gudran Association for Art and Development
On El Cabina’s exit from the Alexandrian art scene: A new beginning for Gudran
Rowan El Shimi | Visiting El Cabina for the first time in 2012 marked the beginning of my love affair with Alexandria.
Alexandria
Save Alexandria, and free Sherif Farag
Sherif Farag is “one of the greatest persons you can meet,” tweeted prominent Alexandrian activist