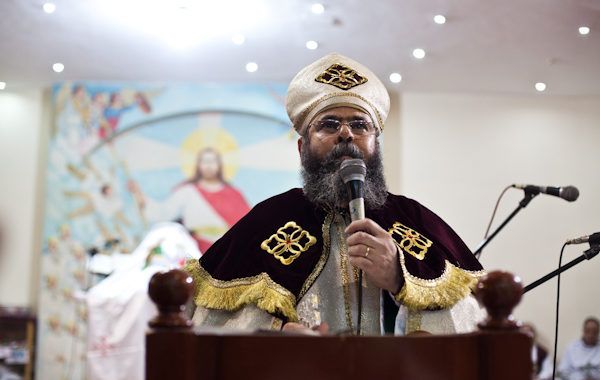 A case to abolish marriage preparation sessions held by Egypt’s Coptic Orthodox Church is to be referred to the State Commissioners Authority for review, an administrative court ruled earlier in November.

The church’s marriage preparation for Copts, referred to as counseling sessions, consists of talks, workshops and group couples counseling.

The lawsuit to abolish these sessions was filed by Ashraf Anis, founder of the Right to Life movement that is working to reform the church’s strict marriage laws and restrictions on divorce and second marriages for Coptic Christians.

For Anis, the problem is more about how the sessions fit within the church’s attempts to control the personal lives of Copts than the content of the sessions themselves, which he explains are often compulsory and complicate marriage procedures for young Christians.

“The church uses its power over Copts in violation of the law and the Constitution to give an impression that it solves personal status issues for Copts, but what it is actually doing is attempting to further control them and their right to marriage,” Anis says.

For a married Coptic Christian couple to get divorced, adultery needs to be proven, and it is almost impossible to get a divorce otherwise. A number of Coptic activists have long demanded amendments to the church’s marriage and divorce laws, and for Copts to be able to opt for civil marriages if they wish.

There is no official available data on the numbers of Copts filing for divorce in Egypt, as the Coptic Orthodox Church has never released such information. Writer Karima Kamal explained in her book Divorce of Copts (2006) that there were 300,000 divorce cases filed before the courts since 1971, when marriage and divorce laws for Copts were changed and further restricted. Anis thinks this estimate is realistic, given the size of the Coptic population in Egypt.

Although not always enforced, priests often refuse to continue with marriage procedures in the absence of a certificate proving that both parties have attended the preparation sessions. The church argues the sessions are an important way of avoiding post-marriage conflicts that may lead to divorce, but Anis believes the sessions are ineffective.

“Imagine that Copts, many of who are not well-educated, like many Egyptians, are forced to attend lectures on psychology and other complicated issues. Sometimes these sessions, held by psychiatrists and human development experts, are paid. But what if someone cannot pay for them?” he says. A number of couples, however, say they paid minimal fees for the sessions, and that sometimes the church pays for those who cannot afford them.

The spokesperson for the Coptic Orthodox Church, Boules Halim, was unavailable to comment, but he said in September that the marriage preparation sessions would be compulsory from July, following recommendations by the church’s Holy Synod.

For Anis, the problem is the church’s attempts to control the personal lives of Copts.

Vivian Magdy, who plans to get married in a few months, is not planning to attend the sessions, although she is aware this may complicate marriage procedures, given the fact that the Giza archbishopric, which she belongs to, makes them compulsory.

“Neither me nor my fiancé need these sessions — problems between couples happen with or without them,” she says. “Most of the lecturers brought in by the church are incompetent,” she adds, explaining, “I am bound to the teachings of the Bible, not to what the church imposes on us.”

Peter Nazeh did not attend the sessions before his marriage. “I’m from Cairo and my wife is from Minya, which made it impossible for us to attend the sessions together,” he recounts. “My church’s priest exempted me from attending the sessions, but my brother, who got married two months later, was forced to attend by the same priest.”

“The content of the sessions is purely academic,” he says. “In reality, people’s personal traits are what guide them, not academic and theoretical talks.”

Samir Georgy, a newlywed who attended the sessions at his church in Zamalek, however, believes they are necessary. “The aim of these sessions is to get the couple exposed to each other, to know each other’s characters and how to handle them. As it’s hard to get a divorce, it becomes essential to attend these sessions and to make them compulsory in order to ensure everyone really will attend,” he adds. “I know couples who broke up after these sessions when they realized they couldn’t handle each other. It’s better to break up while people are still in the engagement period rather than discovering this later.”

Georgy says he found the sessions very helpful, pointing to sessions on psychology, emotional intelligence, sexual education, housekeeping, and how to financially run a household.

Anis’ main issue is with how the church uses the sessions to further control issues of Copts’ personal status. “The church uses these sessions against Copts when they ask for divorce,” he explains. “When a person demands to file a divorce, priests tell us we had the time to choose our partners during these counseling sessions.”

Researcher of religious freedoms at the Egyptian Initiative for Personal Rights Ishak Ibrahim explains that the problem is predominantly related to the church’s total control of the right to marriage for Coptic Christians. While these sessions are not yet compulsory across the country, there are moves to make this the case.

“The priests finalizing marriage procedures have full control over couples who wish to marry, and these sessions are part of this control. There is no problem with the idea of having such counseling sessions. However, they should not be compulsory,” he asserts.

He believes that the solution for this issue, and other challenges related to the marriage of Copts, is directly linked to the introduction of civil marriage for all citizens, suggesting: “The church can still keep its religious marriages and give Copts the opportunity to choose between civil or church procedures. The state has an obligation to offer the option of civil marriage.”

AD
You Might Have Missed
Where do old lesbians go to die?
If they steal Sheikh Jarrah
Mugamma revisited: Reimagining the building and the square
Carbon Colonies & A Green New Deal
AD
Mai Shams El-Din
161 articles on Mada

Topics
Related
coptic christians
Coptic church proposes law to allow divorce in cases of desertion
The Coptic Orthodox Church has proposed new draft provisions for the laws governing marriage and divorce
coptic christians
Coptic bishopric threatens to cancel marriages due to ‘indecent’ celebrations
The archbishopric of Malawy, in the southern city of Minya, has slammed “lewd” practices during Coptic