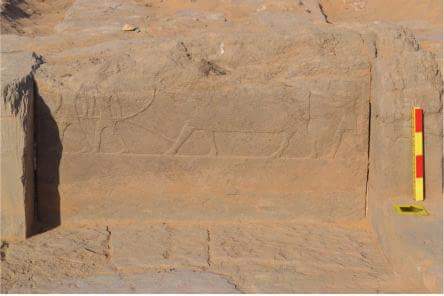 Archaeologists have unearthed segments of an ancient funerary causeway in the Qubbet al-Hawa Necropolis in Aswan. The Ministry of Antiquities announced that this discovery represents a “major breakthrough” in understanding the history of the archaeological site.

Several clay fragments and pieces of pottery, believed to have been used in the embalming process, were found nearby the causeway. The structure is over 3,900 years old, and the necropolis in which it was discovered functioned as a burial ground for nobility.

According to a statement issued by the Ministry of Antiquities, it was unearthed on Tuesday by an international team of archaeologists which included members of the UK-based Egypt Exploration Society, the Archaeology Department of the University of Birmingham, and the Qubbet al-Hawa Research Project.

The causeway was built on the Nile’s western bank, across from modern day Aswan, during Ancient Egypt’s Middle Kingdom (circa 2050 BC and 1800 BC). Archaeologists believe it was created for Sarenput I, the nomarch of the Elephantine province during the reign of King Senusret I (Circa 1971 BC – 1926 BC), or his successor King Amenemhat II.

Much of what is known about Sarenput has been gleaned from the inscriptions found within his once-colorful and ornate tomb at Qubbet al-Hawa. He is believed to have been Senusret’s chief trade representative with Nubia, and may have served the Pharaoh in other diplomatic or military capacities.

Sarenput’s funerary causeway, which originally stretched from his rock-cut tomb to the edge of the Nile, is thought to have measured approximately 133 meters in length. The Ministry of Antiquities claimed that this makes the structure the longest causeway ever built on the west bank of Aswan.

Martin Bommas, a professor from the University of Birmingham and chief archaeologist on the excavation, is cited as saying that inscriptions were found on certain parts of the causeway indicating that decoration was already underway in the 10th year of Senusret’s reign. He added that Sarenput’s causeway was constructed from sandstone, and the inscriptions depict a funerary scene in raised relief.

Bommas stated that further studies and scientific analysis of both the causeway and pottery found nearby will be conducted.

The Ministry of Antiquities claimed that the pottery fragments found by the structure were in use for nearly 600 years, primarily in the funerary rituals held at Qubbet al-Hawa.

The Qubbet al-Hawa Necropolis has seen several historic discoveries since 2008, when an archaeological team from the University of Jaén in Spain began conducting excavations there.

In early 2015 the team excavated the remains of a noblewoman who exhibited the earliest documented case of breast cancer. The remains are approximately 4,200 years old, as such the woman is estimated to have lived during the time of the Old Kingdom’s Sixth Dynasty (2345 BC – 2181 BC).

In May 2016, the same archaeologists unearthed a well-preserved sarcophagus containing the mummy of a Middle Kingdom noblewoman identified as Sattjeni, said to be the daughter of Prince Sarenput II, who is estimated to have died more than 3,800 years ago.

AD
You Might Have Missed
Mugamma revisited: Reimagining the building and the square
Where do old lesbians go to die?
If they steal Sheikh Jarrah
Carbon Colonies & A Green New Deal
AD

Topics
Related
Great pyramid
Experts skeptical of Great Pyramid’s newly discovered ‘hidden chambers’
Egyptologists have expressed skepticism about claims that anomalies discovered in the Great Pyramid are
archaeology
Introducing a series on Egyptology, archaeology and heritage management in Egypt
Meredith Brand | Neglect and mismanagement are accusations that permeate any discussion of Egypt’s cultural heritage.
Ancient Egyptian artifacts
Spanish archaeologists unearth more than 3,800-year-old sarcophagus, mummy in Aswan
A team of Spanish archaeologists from the University of Jaén has unearthed a well-preserved sarcophagus
Ancient Egypt
Swedish archaeologists unearth 3,400-year-old necropolis in Aswan
A team of Swedish-led archaeologists announced on Wednesday that they discovered a network of over 40