Sand quarrying and the dumping of waste and rubble from construction sites in New Cairo is increasingly threatening Egypt’s Petrified Forest — also known as Gabal al-Khashab (Hill of Wood) — a small protected area about 30 kilometers from Maadi.

The Environment Ministry classified the Petrified Forest as a natural protectorate in 1989, in an attempt to safeguard the tree deposits left there when a tributary of the Nile River is believed to have flooded its banks nearly 30 million years ago. In response to calls for increased protection of the area, the Finance Ministry allocated funds to construct a wall around it after 2010. 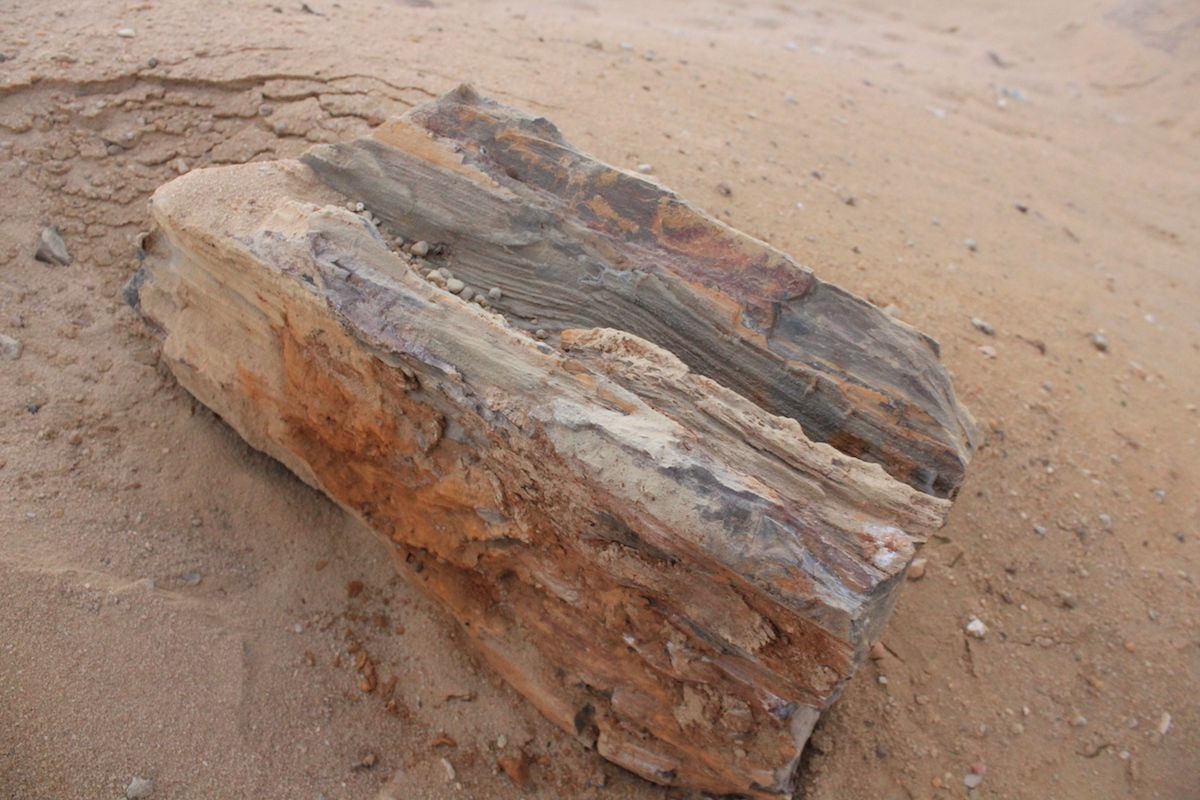 But construction workers at sites in New Cairo continue to dispose of waste and rubble in the six-square-kilometer area. The refuse is often piled so high that the walls of the protectorate are obscured from view, and large segments of the wall have been demolished to allow vehicles to enter the protectorate and remove tons of sand.

Gabal al-Khashab has become caught in a construction boom amid a symbolic interest from authorities in protecting Egypt’s natural resources and history.

Unlike other Egyptian protectorates, there are very few rangers or guards patrolling the area, and there are no entrance fees, hence no funds coming in for much-needed maintenance.

“We have actively sought to get civil society organizations involved in protecting this threatened protectorate,” says AA, a local resident and leading member of the neighborhood group Friends of the Petrified Forest.“However, officials presiding over it do not seem to want our involvement.”

Although the protectorate has been slowly destroyed since 2008, this has been accelerated in the last two and a half years, according to AA, despite complaints from local residents and geologists.

The few guards at the Petrified Forest say they don’t have sufficient personnel to safeguard it, and need a larger budget to do so. “We and the guards suggested that the sale of tickets would help to provide this budget, to no avail,” AA says.

The director of the protectorate Shaimaa Taha declined to speak to the media without official clearance from the Environment Ministry, but an official from the Natural Protectorate Department, speaking on condition of anonymity, says that the area is understaffed and difficult to protect.

“In whose interests are people destroying this national treasure and digging up its sands for free?” 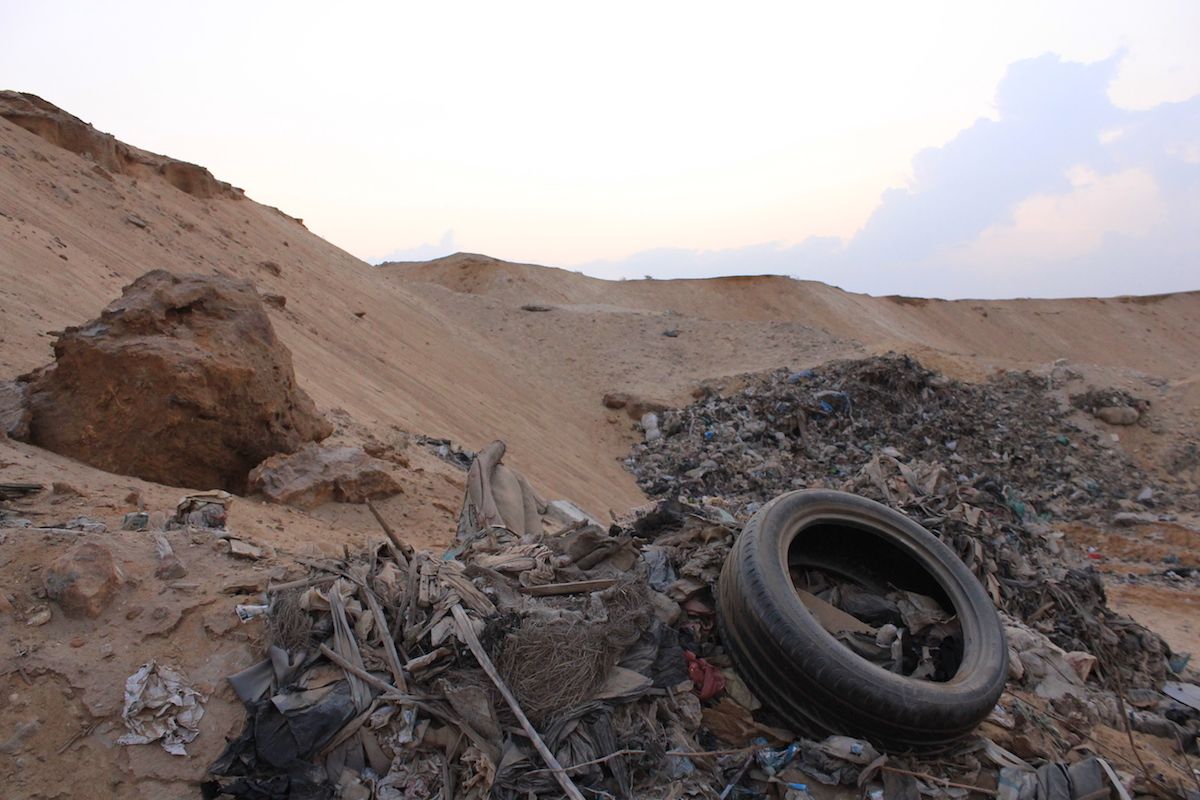 Metwalli, a German University in Cairo (GUC) security guard, stands across the street from the Petrified Forest. He has seen the quarrying of sand from the protectorate take place under the cover of night since 2013.

“They have been active here on a daily basis until a few weeks ago, when a security raid largely deterred their operations,” he says.

There are two police stations and the headquarters of the municipal authority within walking distance of the protectorate, Metwalli explains. “So, why did they take so long to react to this theft and destruction? In whose interests are these people destroying this national treasure and digging up its sands for free?”

“Big trucks enter at nightfall to extract sands for use in construction sites in New Cairo,” the national protectorate official says. “We’ve filed several complaints with local police stations and even concealed spiked chains in the ground where there are breaches in the wall. On some days, there are numerous trucks with flattened tires.”

None of this has solved the problem, the official says, adding that many of “the people who commit these violations work in large groups, and are often armed with weapons, which is why the protectorate has to turn to the police or military for support.”

Police forces manned checkpoints around the protectorate in June 2015 in an attempt to halt sand quarrying. According to local media reports, 25 trucks loaded with sand were caught during this period. A senior official from the Environment Ministry told local media outlets in September that the Armed Forces is now also involved in securing the Petrified Forest from sand quarrying.

In an official statement issued in August, the Environment Ministry claimed that the Petrified Forest is being developed into a special geological, botanical and scientific site. However there are reports that the Housing Ministry is seeking to claim up to 60 percent of the area for residential property.

It isn’t just companies that have been dumping waste in the Petrified Forest. Nearby residents have also increasingly been leaving organic waste and garbage in the area, which has attracted stray dogs to the protectorate, Metwalli explains, and has impacted the ecosystem of the area, particularly foxes and several species of reptiles, which used to be seen regularly emerging from their holes. 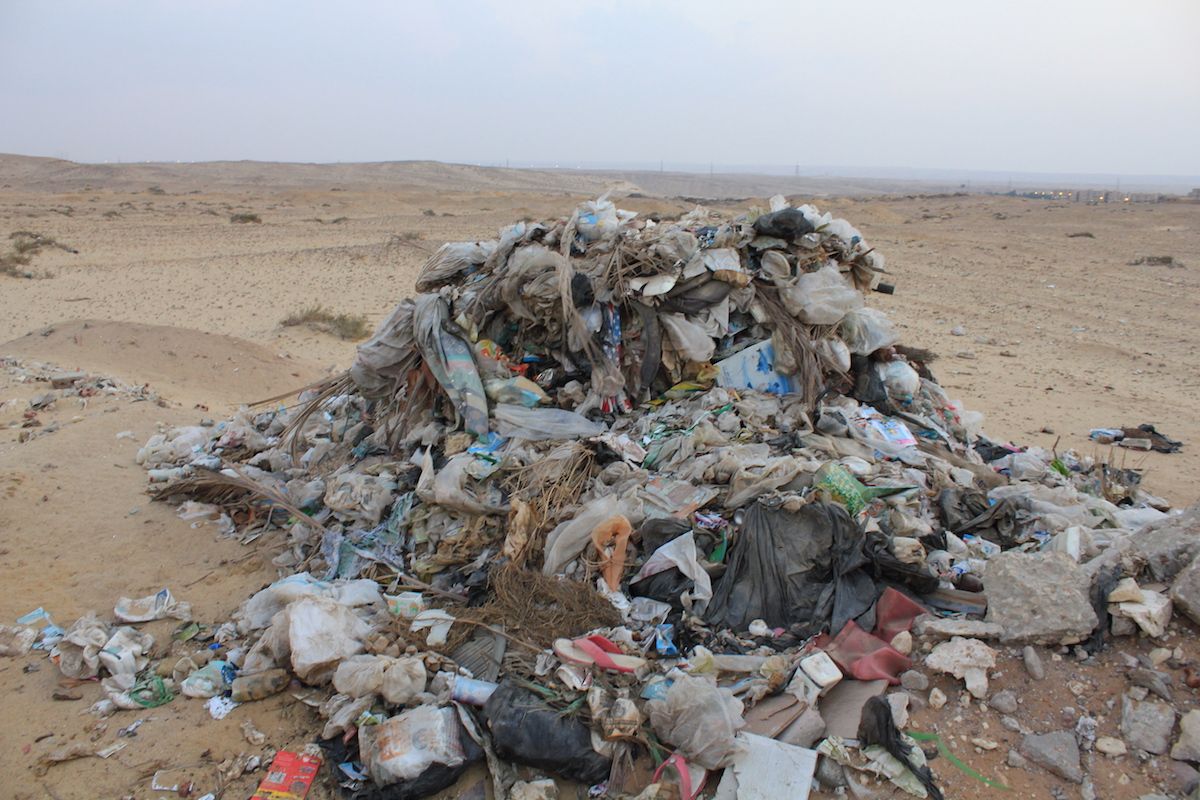 “There are only a few individuals who remain interested or who still have hope in salvaging the Petrified Forest in coordination with officials.”

Environment Minister Khaled Fahmy recently said Egypt’s protectorates would not be neglected, and that violations against the Petrified Forest, Wadi Degla, Nabq and other protectorates represent a “heinous crime.”

The ministry claims Egypt is abiding by its international obligations to uphold the United Nations’ Convention on Biological Diversity. Officially, the government has said it is seeking to increase protected ecosystems of scientific importance from 15 percent of national land to 20 percent by 2017.

In April, however, Egypt’s executive authorities agreed to transfer sovereignty of the Red Sea islands of Tiran and Sanafir to Saudi Arabia as part of a new maritime border agreement. The islands are an integral part of the Ras Mohamed Marine Protectorate, which the Environment Ministry describes as being “known globally for the diversity and richness of its coral reefs.” The deal is being contested, but if it takes place, Egypt will lose at least 113 square kilometers of protected land.

Amid tough economic conditions, the state appears torn between a duty to protect such areas and the pull of developers and investors. “There are only a few individuals who remain interested or who still have hope in salvaging the Petrified Forest in coordination with officials,” AA says, explaining that the Friends of the Petrified Forest have been seeking involvement in the area since 2014.

AD
You Might Have Missed
Carbon Colonies & A Green New Deal
Mugamma revisited: Reimagining the building and the square
What we talk about when we talk about trees
Where do old lesbians go to die?
AD
Jano Charbel
78 articles on Mada

Topics
Related
Tiran and Sanafir Islands
Nationalism and generosity fuel the defense of Tiran and Sanafir
Beesan Kassab | "The Public cooperation was remarkable and the documents began to pour in"
illegal hunting
3 Saudis, Egyptian driver sentenced to prison in absentia for illegal hunting
In a rare verdict, three Saudi Arabian citizens and their Egyptian driver were sentenced to life in prison
Sharm el-Sheikh
What’s in an island?
Heba Afify | Tiran and Sanafir transfer to Saudi is of little concern to their actual neighbors
panorama
The rarely seen birds of Egypt
Ahmed Waheed | Ahmed Waheed started bird-watching when he was seven years old. He would travel with his father, who