Beyond the din of the battle: Stories from the struggle for Port Said

For those of the north await,

With my weapons to the north I’ll make

Oh men of the north, your brother is always awake

In battle I’ll stand before you

No sacrifice too big for you or the canal, 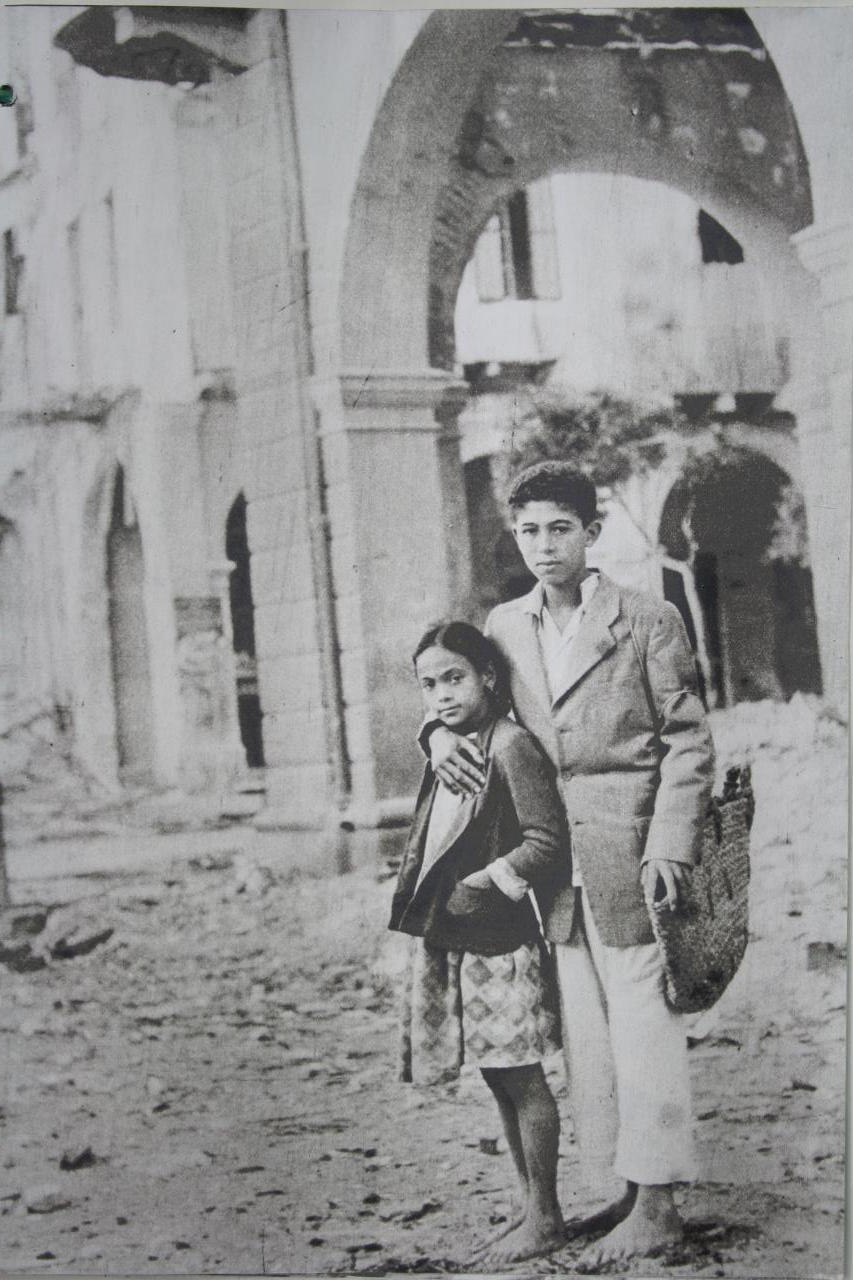 At midnight on November 4, 1956, Gamal Abdel Nasser and Abdellatif al-Bughdadi snuck out of the Revolutionary Council premises in Zamalek, where they had been camped for days, and took the road to Port Said.

Egypt had been under attack by Israeli forces since October 29, and was bombarded by French and British forces on October 31, after rejecting a British ultimatum to withdraw from the canal area. Nasser, Bughdadi and the rest of the Revolutionary Council gathered in Zamalek in an attempt to hold the fort. Their days and nights were rife with panic, anxiety and arguments as to whether they should surrender, given the dreary outlook for both them and the country.

On November 4, Nasser decided to break the paralysis and head to Port Said to assess the damage and entice a stranded military to send back-up forces from Sinai to Port Said. Bughdadi insisted on joining him.

The road to Ismailia was littered with scenes of defeat: tanks and military vehicles were stranded, set on fire, burned, or simply abandoned. Bughdadi recounts in his memoirs how a shocked Nasser kept asking him why he thought every vehicle looked the way it did. As they drove into the night through the disaster in silence, he recounts how Nasser kept murmuring to himself in English, “I was defeated by my army…”

They arrived in Ismailia around dawn and were shocked at what they found — citizens armed and patrolling the streets, vendors sitting with rifles on their laps. The scenes of resistance and mobilization, the looks of defiance and preparedness for battle were all in stark contrast to the defeatism of the Revolutionary Council. This was an inspiring moment for Nasser before he returned to Cairo. He didn’t observe the troops beyond Ismailia in Port Said, where the enemy’s forces were besieging the city.

This moment, for me, is a metaphor for the coup d’état of 1952 that many of us have grown up revering as a revolution. This was a moment in which a general state of popular mobilization existed among a people ready for liberation. There was a preparedness to fight and die that the Revolutionary Council capitalized on. Most historical documentation of this moment is of a military history — one war after another — even though none of the wars during this period were military victories.

I spent three months collecting stories from people who were in Port Said during the siege that was the tripartite aggression between October 31 and December 23. These are some of the stories they told.

Seven nights and a morning

It was a British conspiracy; planned with French deliberacy

with the Jews, they were a gang conspiring, for seven nights and a morning

With planes and tanks they charged, their failed attacks fell hard

they blocked the canal nothing passes through,

they cut off the water, the light too,

these seven nights and a morning.

The memoirs of French and British soldiers who were traumatized by their experiences in Port Said give us a picture of the general structure of the war at the time. The first phase of the war was planned as an aero-psychological campaign, one that was intended to last for eight days and to break the will and spirit of the soldiers to fight back. As the songs of the simsimiyya tell us, the bombing campaign lasted for “seven nights and a morning.”

People divided themselves into several resistance groups: one of these groups was an air-fighting battalion, in which civilians stationed themselves at several points in the city and shot at airplanes with rifles. One man is said to have died tossing slippers at planes from a rooftop, other groups were responsible for burying the dead. It is said that the bombing usually stopped from 3-5 pm, which people referred to as the “British tea break.” This became the time of frantic attempts to collect and bury the bloated bodies strewn along the streets.

After the bombing campaign ended on November 7, more forms of resistance were organized. A group of women were responsible for smuggling weapons carried across Manzala Lake by fishermen, and delivering them to the resistance groups. Popular committees emerged to protect properties and distribute the city’s dwindling supplies. Fliers indicate that these committees were formed by different communities in the city, such as the Greek, Italian, Sudanese and Nubian communities, whereas others represented different political factions.

Stories of resistance weren’t full of the chivalry and valor one might associate with the memories of this war. Rather, the sentiment from most people I spoke to was that they had no choice but to get involved. The city was under siege, and they were defending their homes. The battles were futile. In most cases, such as with the air-fighting battalions, people went out to die. Sometimes a battalion was wiped out within hours.

The siege meant that neither newspapers nor radio could broadcast to Port Said. On account of this, people didn’t know that the world was rising up in support of their cause, in opposition to the Suez War. This is why the enemy’s fliers were effective.

The war of the fliers

The “war of the fliers” started with the dropping of fliers from enemy planes during the siege. Most played on people’s faith in the Revolutionary Council. This one, for instance, titled, “What Cairo’s broadcasting failed to mention,” describes how the allied forces (British and French) found arms dumped by Egyptian military forces in Manzala Lake, speculating that this might mean military personnel were defaulting or surrendering. Others more openly insinuated that a coup was being planned against Nasser in Cairo, or that Cairo had surrendered and only Port Said was resisting.

War of the fliers: “What Cairo’s broadcasting failed to mention …” / courtesy of Diaa Eddin al-Qadi in Port Said.

This was one of many fliers that tried to blame the revolution for bringing misery to Port Said. It is a poor pun on the name of the city, with the eagle, probably representing the Revolutionary Council, removing the said (meaning happy) and leaving behind bur (barrenness). 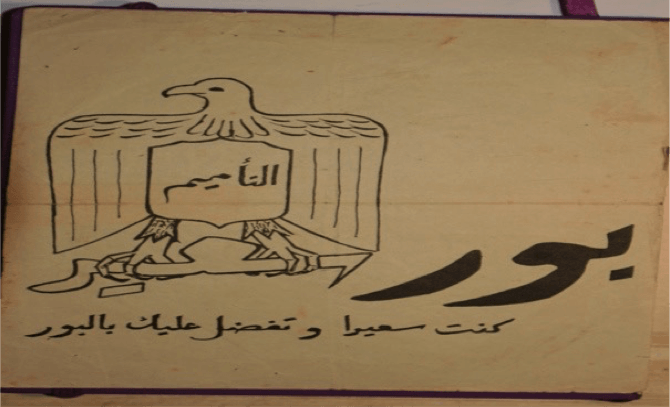 War of the fliers, courtesy of Diaa Eddin al-Qadi in Port Said.

After the bombing abated, fliers from the resistance forces were designed and distributed in an attempt to raise morale. Some listed the ways one could join the resistance, such as by naming those who colluded with enemy forces and disclosing their plans and strategies “until we throw them out to sea again.” 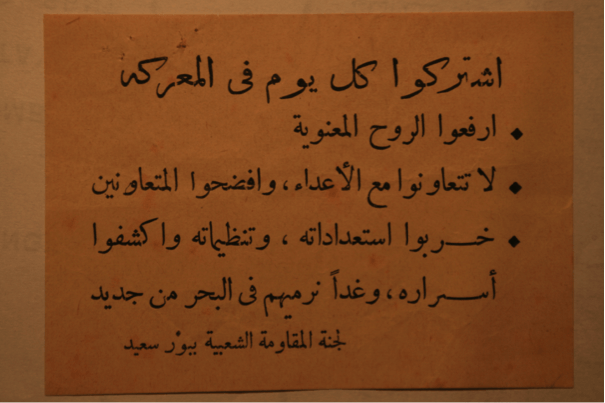 War of the fliers: Fliers from the resistance, courtesy of Diaa Eddin al-Qadi in Port Said.

War of the fliers: Fliers from the resistance, courtesy of Diaa Eddin al-Qadi in Port Said.

Other fliers targeted British and French land troops in attempts to warn or scare them.

Whereas most of the enemy’s fliers focused on demoralizing civilians by chipping away at their relationship with a ruling regime, a bigger “revolution,” local fliers focused on raising morale or building alliances within the community. Stories of fighting, resistance and sacrifice from Port Said were told from the perspective of protecting homes and families, or dying for a cause, rather than protecting a revolution.

Despite several calls for a ceasefire from the Security Council on November 4, the bombing did not stop until November 6, when troops were sent into Port Said by sea and air. Throughout the bombing and after the invasion, it was almost impossible to get in and out of the city, even for journalists. On the first two days, people tried to escape by fishing boat across the Manzala Lake to Damietta. Two days into the bombing, however, the lake was so full of bodies that the fishermen’s oars could no longer push through the water.

On November 5, the bombing reached its peak. Realizing a ceasefire would have to be put into effect soon, the enemy’s attacks became more aggressive as the troops prepared for landing. British forces bombed electricity stations and oil depots, and the neighbourhoods of Abadi and Manakh were set ablaze. Many people I spoke to described how, after the bombing stopped, around 5 pm, they climbed onto their rooftops to watch in horror as the city caught fire. There was nothing they could do.

“I climbed to the top of my roof,” Mahmoud says, “with my rifle, hoping to find a soldier running in this direction or that. But when I got to the top, the fire was all around Port Said. It was like the whole city was on fire, except our house. I could see the flames lapping from every direction, one building catching fire after another, and it looked like it was only a matter of time before it reached us.” Given that both the sources of the city’s water and electricity were cut, there was no fathomable way to intercept the fire.

And then a miracle happened. It started to rain.

“The sound of the prayers, growing and echoing throughout Port Said as the rain fell upon us heavily, dampening the fires, is something you can never imagine, and something I’ll never forget. People were shouting from everywhere, praying, crying and chanting…” Gizelle recounts emotionally, describing how she fell to her knees as the pouring rain slowly put out the fires.

Poet Kamel Eid describes a similar experience, and with a wry smile, says,“History will not tell you this.”

The simsimiyya remembers those whom history forgets

Personal accounts of the war in Port Said stand in stark contrast to the official narrative of the Armed Forces. They are full of tales of fear not valor, of coincidence rather than strategy. They portray hope amid an overwhelming sense of futility. And that is the beauty of reading history through people’s songs, of listening to it through their stories, and sensing it through their laughter and their tears.

It would be ridiculous to claim that any aspect of the war on Port Said has been forgotten. 1956 is a milestone, an iconic war that cemented the revolution of 1952, that took the Free Officers from nights of disputes and hopelessness in Zamalek in November to the place they hold in history today. But sometimes, amid the din of the battle, the details of what it means to resist, to struggle against an armed enemy are lost.

The number of men, women and children killed in Port Said during those two months of battle, between October 31 and December 23, was 1,360. That is 1,360 civilians killed by two militaries in the span of 54 days. Most of them were killed during those seven nights and that morning.

You will not hear of them in the history books, nor will their names appear on the monuments erected to the unknown soldier or the military reports produced about the battle. But you will hear their names recited in the songs of the simsimiyya and the prayers of their loved ones in Port Said. They are only a few of the voices of the battle, a battle that would have never been won without their sacrifice.

AD
You Might Have Missed
Mugamma revisited: Reimagining the building and the square
Carbon Colonies & A Green New Deal
Where do old lesbians go to die?
What we talk about when we talk about trees
AD
Alia Mossallam
6 articles on Mada