اقرأها بالعربية
The recurring crises of torrential rains: Who is responsible and how do we deal with it?
Despite expecting annual torrential rain, Egypt continues to suffer from the damaging effects of flooding, raising concerns over preventative measures in place and post-crisis management. 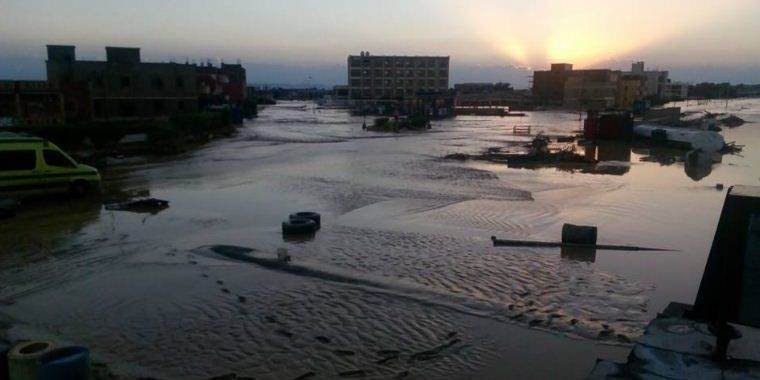 At least 22 dead and 72 injured. These are the latest figures on the number of people who fell victim to the torrential rains that struck Egypt in late October. The rain damaged agricultural land and dozens of houses and roads, in addition to causing power outages.

The most significant damage occurred in the Red Sea, Assiut, Qena, Sohag and New Valley governorates, with areas in Sinai and the Western Desert oases of Dakhla and Farafra also being affected.

The government announced on October 29 that it would allocate LE50 million in compensation to the victims of the recent floods and another LE50 million for the restoration of damaged infrastructure. However, that leaves two main questions unanswered: Why annual torrential rains continue to cause extensive damage and what crisis management mechanisms are in place.

Heba Shamma, an engineer at the Takween Company for Integrated Community Development, was in the Assiut village of Shotab when the heavy rainfall began. She says that the rain flooded the sandy streets of the village, turning them into muddy ponds. Water leaked into houses causing short-circuits in electrical wiring and larger power outages. Even in the city of Assiut, Shamma says, streets were flooded and there were not enough vacuum vehicles to manage the rainwater.

Egypt experiences annual torrential rains during the winter. But the damage varies from year to year. In 2015, heavy rains led to the death of five people in Alexandria and caused damage to several houses in the city’s Mandara and Wady al-Qamar neighborhoods. The entire Alexandria Governorate was brought to a standstill in the aftermath.

In January 2010, heavy rains led to the death of 12 people and caused damage to hundreds of houses in Sinai, the Red Sea and Aswan.

The heavy rain of November 1994, however, is considered the most violent in the country’s recent history. According to the United Nations’ ReliefWeb portal, torrential rains in 1994 led to the death of hundreds of citizens. Some of the highest number of causalities were reported in the Assiut village of Durunka, where ignited fuel leaking from the village’s fuel depots spread on floodwater to neighboring houses. Twenty thousand occupants were displaced due to damages to their homes.

Heavy rain nearly always leads to damages to houses in low areas standing in a flood’s path as well as to highways, but is there a way this damage can be avoided?

Yahia Shawkat, one of the founders of 10 Tooba Applied Research for the Built Environment speaks of two necessary measures to deal with the disasters: preemptive measures that largely prevent, or at least mitigate, the effects of torrential rain and preset disaster management plans for when they do occur.

“For example, roads could be could be built on higher ground, while tunnels could be dug underground to allow rainwater to pass without causing road damage,” he says, adding that this is already the case with a number of roads in Egypt, such as the Cairo ring road. However, Shawkat says that the building method’s high costs may be the reason it is not more widely applied. “I think that the state finds that the cost of repairing and repaving roads is cheaper than building them in a way that protects them from heavy rain.”

Karim Ibrahim, a Takween civil engineer, participated in renovating some of the houses in the Aswan village of Abulrish, which were in the path of a flood that swept through the area and damaged property in 2010. At the time, according to Ibrahim, rainwater had accumulated at the top of a nearby mountain until it reached a tipping point and was sent rushing toward the village carrying rocks along with it. Agricultrual lands were flooded and rocks destroyed several houses.

The Ministry of Irrigation and Water Resources is in charge of developing flood pathways. However, individual governorates are responsible for monitoring these pathways at the local level. Ibrahim thinks that poor monitoring of these pathways –alongside the management of other preemptive measures to deal with rainwater, such as the watching over dams and canals – is due to the fact that their oversight is a shared responsibility among more than one entity, at both central and local levels.

“The law prohibits construction in the floods’ pathways, but the state, even now, seems unable to completely apply the law,” Shawkat says. The tourist destination of Naema Bay in Sharm el-Sheikh, for example, is constructed in a flood pathway, he says, as are most of the bays of Sinai and the Red Sea and the villages of Upper Egypt.

Shawkat and others feel that the best they can hope for is a better crisis management process.

“Maybe it’s impossible to build cities that are totally immune to the dangers of torrential rain, but it is possible to lay down efficient plans to deal with emergencies,” Shawkat says.

The Ministry of Irrigation announced a plan two years ago to prepare a map featuring the 10 governorates most affected by torrential rain: North and South Sinai, the Upper Egyptian governorates and those along the northwestern coast. Irrigation minister at the time, Hossam al-Moghazy, said, “We have 142 flood pathways in nine governorates: 35 in Aswan, 24 in Qena and six in Sohag. The cumulative total length of the pathways is 341 kilometers.”

Former Prime Minister Ibrahim Mehleb’s government drafted a national plan to deal with the effects and dangers of torrential rain. However, implementation was disrupted when the initial financial estimates were reported to be at least LE1 billion over four years.

Wahid Saudi, the spokesperson for the Meteorological Authority, said in a TV appearance that “the authority had warned of the torrential rain season a whole month in advance, noting that Egypt will be witnessing a season of sharp weather fluctuations and that there’s a probability of heavy rains. We asked all the governors at that time to take the necessary measures.”

Shawkat says the government should make citizens aware of evacuation routes in cities that are expected to be affected by floods before rains commence, adding that the routes should be secure and have proper signage.

Moreover, a cornerstone of crisis management in such situations is to appoint a designated disaster authority to take proactive action that includes evacuating areas in cities and villages where floods are predicted to occur, Shawkat says.

“In Egypt, disaster management falls under the Information and Decision Support Center, but it is not an executive entity,” Shawkat says. He also says that the Armed Forces is the executive body dealing with crisis management but handles too wide of a breadth of crises.

Ibrahim agrees, saying that the absence of a national body responsible for both the central and local responses to crises before, during and after they occur is the reason why the effects are often exacerbated.

AD
You Might Have Missed
What we talk about when we talk about trees
Carbon Colonies & A Green New Deal
Mugamma revisited: Reimagining the building and the square
Where do old lesbians go to die?
AD
Mostafa Mohie  @mohie84
23 articles on Mada

Topics
Related
bad weather
Nationwide flooding and heavy rains leave at least 12 dead, 43 others injured
At least 12 people have been killed and 43 others injured after heavy rains and flooding swept across
Armed Forces
The Armed Forces and Egypt’s land
Laila Sawaf | In February, President Abdel Fattah al-Sisi issued a decree to direct the Armed Forces Land Projects
Alexandria floods
Sisi criticizes media for coverage of floods in Alexandria during televised speech
In a lengthy televised address on Sunday, Sisi criticized media coverage of the deadly floods in Alexandria
Alexandria
Alexandria governor resigns in wake of deadly storm
Alexandria Governor Hany al-Messiry has resigned in the wake of Sunday’s disastrous downpours that