Students at the American University in Cairo stormed out on newly appointed President Francis Ricciardone, who attempted to hold a meeting to discuss the implications of last week’s pound floatation on the university.

When they didn’t get the responses they were seeking from the administration, and after several shouting matches with the president and other panelists, students left the crammed hall and marched to an open space outside the administration building, where they promised to remain until a solution is found to what the university claims are inevitable tuition fee increases.

“My father is not a thief, you are the thief,” students shouted, banging on classroom doors and asking others to join them. 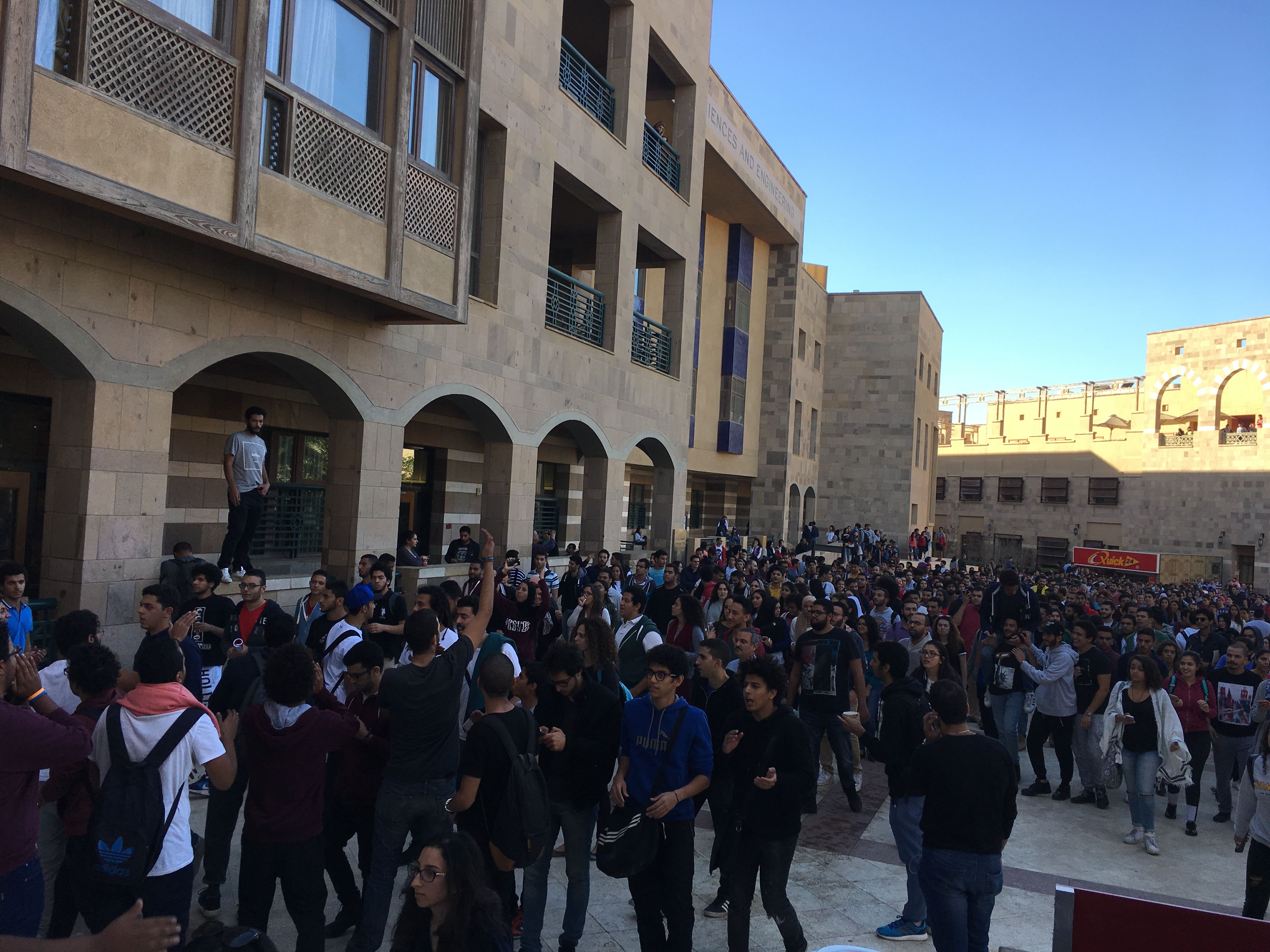 The most pressing crisis for students seems to be an installment of their deferred payments, which is due in the next few weeks. One of the main demands voiced during the meeting with the president, and echoed in students’ chants, is for this installment to be accepted at the old exchange rate.

Tuition at AUC is currently determined half in Egyptian pounds and half in dollars, a change from the way it was calculated previously. The university also recently canceled academic scholarships, which granted students different tiers of discounts according to their GPAs.

“We won’t pay,” students chanted, as Student Union leaders asked them to band together to fend off tuition increases.

“My father is not a thief, you are the thief,” they shouted, banging on classroom doors and asking others to join them.

The meeting with the president was called for at the beginning of this week in a bid to open a conversation around the implications of the pound floatation on the university and the wider community. It was supposed to be the first in a series of similar meetings to be held with the Parents Association and other concerned groups, after the government freely floated the local currency last Thursday.

As students crammed into one of the smaller halls on campus, however, it became obvious things would not go as planned. For starters, the room couldn’t hold a fraction of the students and faculty that wanted to attend. 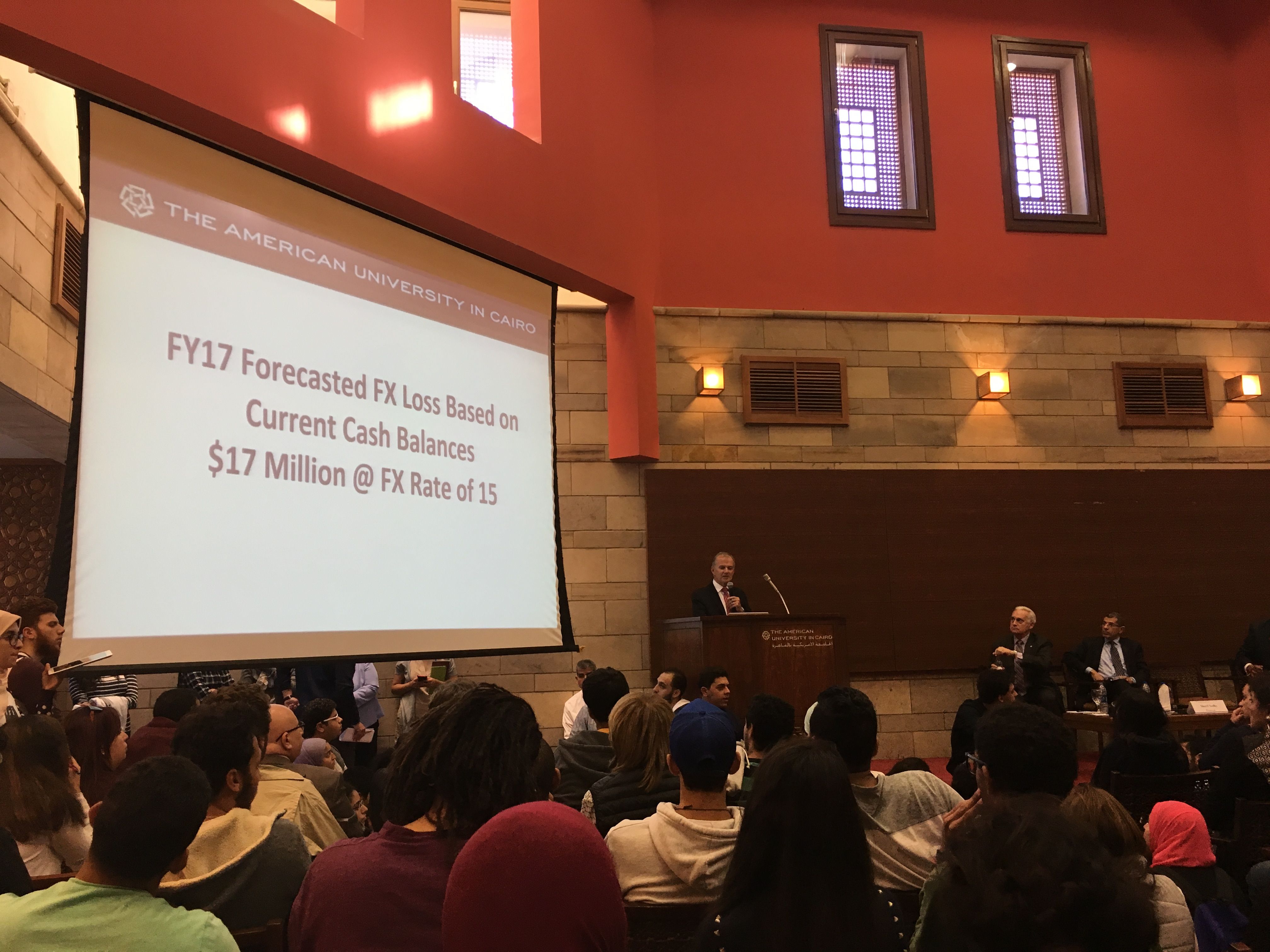 “This is a sign of disrespect and poor planning on your part [the administration] for either not thinking enough students would be interested to attend this meeting or not caring if they do,” one student said at the beginning of the meeting.

The president and three panelists presented AUC’s budget and the losses the university expects to incur. Brian MacDougall, AUC’s chief financial officer, said FX losses based on current cash balances are expected to reach US$17 million, given a rate of LE15 to the dollar.

The speakers were repeatedly interrupted by students saying they already understand the economic crisis Egypt is going through, and were attending the meeting to get clearer answers on their tuition fees and their futures.

In his opening remarks, after repeatedly asking students to quiet down and squeeze together to make room for more attendees, Ricciardone said this is a historic and difficult moment for Egypt’s economy and that the affects would be felt across the board.

“We are all now vulnerable to market forces like never before,” he said, adding, “In the long run it is good for us, but in the short run there is going to be pain.”

AUC’s costs will now have to “reflect the real costs,” Ricciardone explained, as opposed to those pegged to the less realistic exchange rate. “Keeping that culture of excellence is important … no one wants AUC to cut its costs and cut its excellence or quality,” he added.

SU President Alfy countered this later, arguing that at this rate, many students would consider leaving the university and would not advise their younger siblings to enroll. “Students are the lifeline of the university,” he said, without which there would be nothing left. 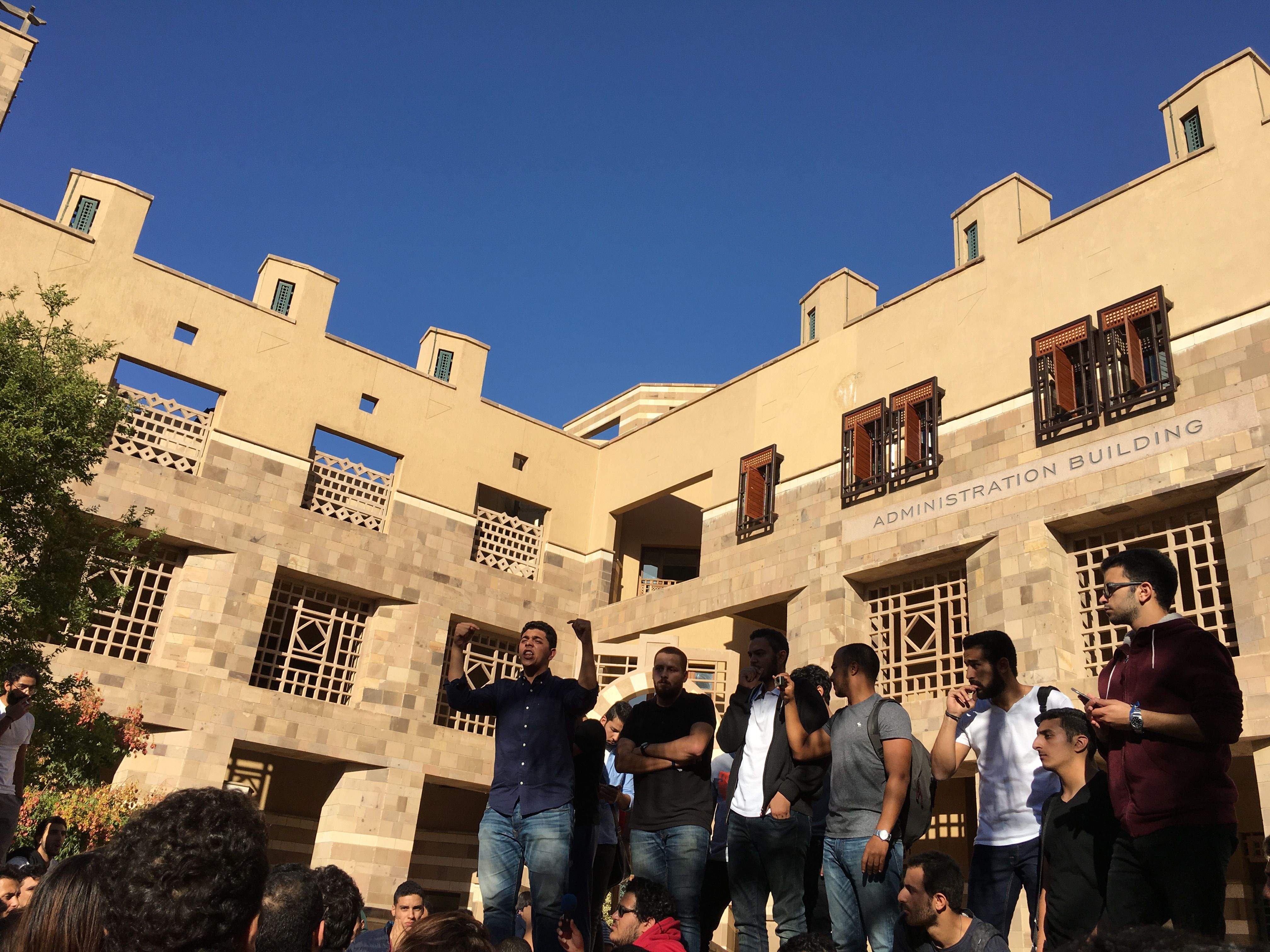 Ricciardone said people should be concerned on an individual basis, but should also “worry about this community.”

“The university is committed to lowering costs in anticipation of high inflationary impact. The immediate solution is endowment support, as unfortunately our current spending rate is 5 percent,” he said, comparing this to universities in the United States, which spend much lower amounts from their endowments.

Students questioned the allocation of the university’s financial resources. One student pointedly asked the president where the costs of his fancy inauguration ceremony came from, to which he nervously replied, “It came from gifts that had already been given to AUC.”

Students had previously criticized the lavishness of the ceremony, which took place in October to celebrate the incoming president, who formerly served as the US Ambassador to Egypt.

When asked how tuition fees would be affected, the president of AUC replied, “There is no such thing as a free lunch and understanding that is part of becoming an adult.”

Samer Attallah, assistant professor of economics, was on the panel to explain the current economic circumstances. “We as a society faced a major shock [last week], even though we have been expecting this,” he said.

“What was surprising, was everything happening on the same day. We expected a devaluation, not a complete flotation,” he said, pointing to the accompanying decrease in fuel subsidies. “This is a real economic shock.”

“If I were the government I would have done it in phases. People lost 48 percent of the value of their savings and this has a severe impact on purchasing power. You need LE1.30 to buy the same thing that used to be LE1 … families have to reduce their standards of living.”

This presentation of economic facts, it seems, was an attempt to bring both students and the administration to a point of agreement regarding the new realities. However, it only served to alienate students further.

Each time he was asked how tuition would be affected, Riccardione replied with a variation of, “There is no such thing as a free lunch and understanding that is part of becoming an adult,” or, “We don’t want to lose any students,” or, “We are committed to excellence,” and, “We will make sure that financial aid goes to students in need.”

That is until he was asked outright, “Is my tuition going to go up by LE35,000 next semester? Yes or no? And I don’t know is not an answer.”

The president’s initial answer was, “This is a ridiculous question,” describing it as illogical, given the unpredictability of the current economic situation. But this did little to alleviate students’ anger, some of them noting the tone of condescension and asking to be spoken to like adults.

Other times he retorted, “There is no solution” to requests for answers, to which students shouted, “RESIGN, RESIGN!”

When he finally addressed the issue of tuition fees, the president affirmed they would increase, adding that the board will likely increase tuition “in real terms,” but that he intends to “ask them to hold tuition steady in accordance with the budget.”

Sporadic shouts and chants flew from the increasingly angry audience, who crowded around the stage. Some students were adamant about protesting, while others pleaded that the university reconsider its policies moving forward. “Please help us complete our education,” one student said.

“I don’t know why I should trust this board anymore,” added another.

“I can’t afford it. This is not fair,” said several students as they angrily marched out of the meeting hall.