اقرأها بالعربية
Why do so many Egyptian women not breastfeed?
Egypt’s social and economic context discourages breastfeeding, with rates far lower than that recommended by international health organizations. 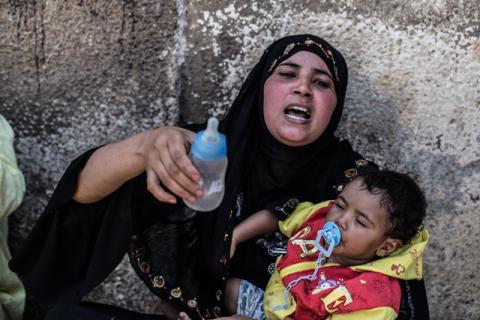 Wessam Said, 28 years old, would have liked to breastfeed her child, believing that it is healthier, but, as the main breadwinner, she was unable to provide the care she thought was best. “What could I do – our conditions are dire. I know many others who did the same.”

It is medically advised that newborns depend exclusively on breastfeeding until the age of at least six months. A joint message by World Health Organization and UNICEF on the occasion of World Breastfeeding Week in August reiterated this: “Breastfeeding is not only a cornerstone in the healthy development of the child, but also the basis of development of countries.”

Why then do many Egyptian mothers seek infant formula? Could it be as psychiatry consultant and fellow at the royal College of Psychiatrists in London Khalil Fadel suggests, that they are taking an “easy route” and have become “lazy because everything in society has become plastic, false and takeaway.”

Either work or breastfeed

Most of the women Mada Masr spoke to cite work as the main reason they did not breastfeed at all or less than they wanted to.

According to the Central Agency for Public Mobilization and Statistics (CAPMAS), women between 15 and 64 years old made up 22.9 percent of the labor force in 2015. More than four of every five working women work full time. These figures do not include women who work outside the formal economic sector, whether in small businesses, skilled or manual jobs.

“Egyptian women are well aware of the advantages and necessity of breastfeeding,” says Mona Mina, deputy chair of the Doctors Syndicate. “But, when they resort to artificial feeding, it is because of external reasons, the main one being that they have to return to work.” She cites the short maternity leave provided in governmental jobs, pointing out that it is even shorter in the private sector, while the labor conditions for women workers and manual laborers are even more difficult.

The civil service law issued by President Abdel Fattah Al-Sisi last year – which has since been frozen, as it was not approved during the first assembly of Parliament in January — entitles women to four months of maternity leave for a maximum of three times throughout her career as a civil servant. This extends maternity leave by one month compared to the stipulated three months in the labor law.

Secretary General of the Egyptian Association for Pediatrics and head of the Friends of Breastfeeding association Ahmed Said Younis explains that the group is working to extend maternity leave to six months, which would bring it in line with UNICEF recommendations for breastfeeding.

“We managed to increase maternity leave from three to just four months, because the government in Egypt does not agree to provide mothers leave comparable to other countries. Those six months are the basic need for breastfeeding. How can we build a successful nation, if the government is not willing to allow the needed time to build a healthy individual?”

Working mothers have other rights in principle. But the breastfeeding hour mandated by law is not always allowed, and, even if it is, an hour is not sufficient for most women to return home, feed their child and then to return to work. As such, many women are compelled to use infant formula, since they leave their babies with their mothers or others while they are at work.

Many women cite the shame of breastfeeding in public, especially in cities as compared to rural areas.

“Once I forgot the bottle,” recalls 28-year-old mother Rene Edward, “and I had to sit in a dark store to breastfeed my son instead of going back home and ruining the outing, although we were in a cafe and I had a cover.” She did not want to breastfeed him in public because she says she would have been upset by people looking at them. “Honestly I no longer see women breastfeeding in public nowadays,” she says.

The shame of breastfeeding in public can lead to social isolation for women. Thirty-five-year-old mother Hala Hassan says she could rarely leave her house during the months when she was breastfeeding. “I was exhausted because I didn’t go out at all throughout that period, except to go to the doctor. I was deprived of outings and visits. I even left my work, unfortunately.” 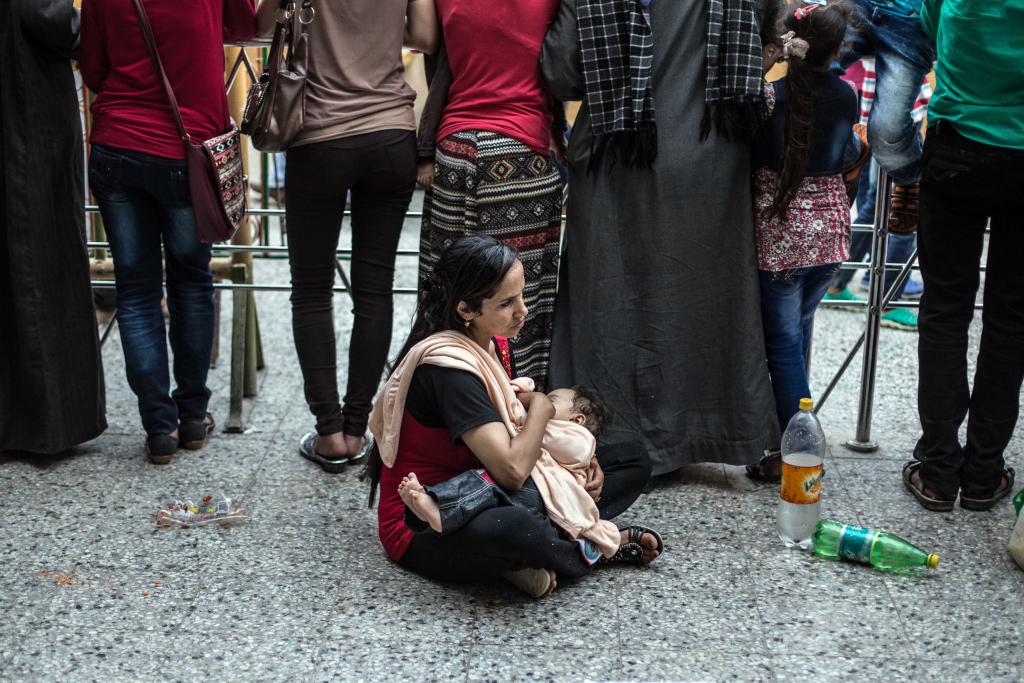 Delivery by cesarean section is another important reason for low breastfeeding rates in Egypt. Amr Hassan, a lecturer in gynecology in the Qasr al-Aini Faculty of Medicine at Cairo University, explains that a high rate of cesarean sections is associated with low breastfeeding rates. “Because of pain following the operation, mothers are unable to breastfeed in the first few days after surgery, thus losing the important first few hours when putting the newborn to the breast stimulates the milk glands.”

Egypt has one of the highest rates of delivery by C-section in the world, according to the World Health Organization. Figures provided by the 2014 DHS suggest C-sections are used in 52 percent of deliveries, a radical increase from the 2008 DHS, when it was 27 percent. The WHO recommends that the percentage of delivery by cesarean section should not exceed 15 percent.

A doctor working at a formula distribution room in a Motherhood and Childhood Care center in the Gharbiya Governorate says, “We are in an area that is more rural, and the belief that breastfeeding causes breast cancer comes up a lot with women who come to us seeking subsidized infant formula for fear of developing cancer. No matter how much we try to correct that misinformation, they do not respond easily.” 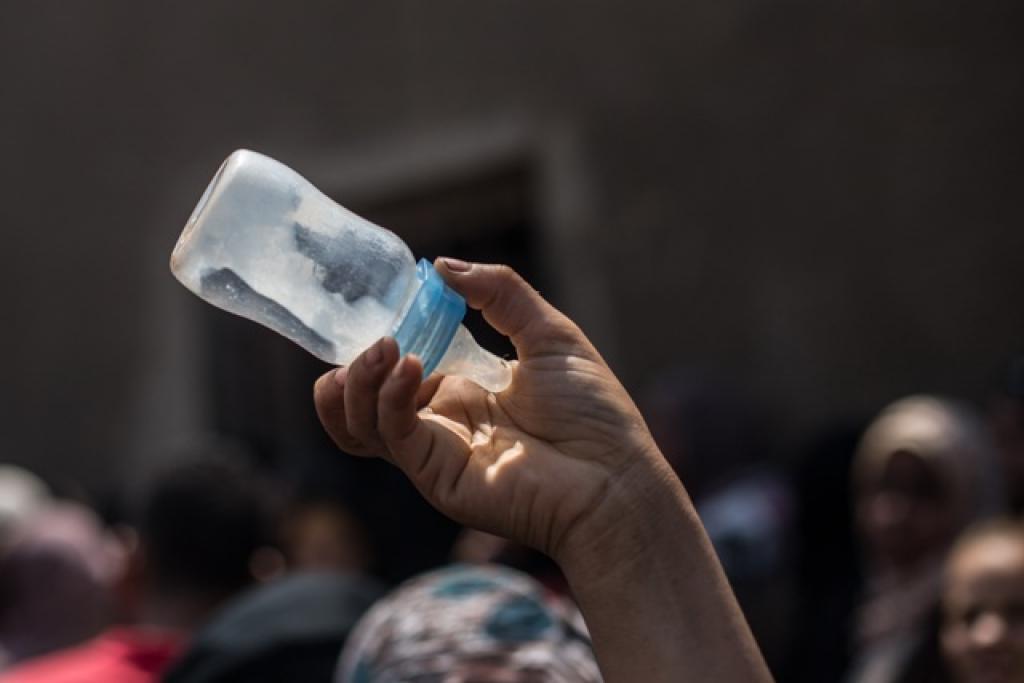 Many mothers say that they opted for infant formula because they were unable to produce enough milk. Younis says that this belief is also due to a misunderstanding, saying that many women lack the necessary information to understand what happens to their bodies after delivery, especially as regards the secretion of milk.

“Some women falsely think that their milk is scarce, so they seek artificial feeding straightaway,” he describes. “What we try to explain is that the milk is scarce during the first three days after delivery. It is called colostrum and consists mostly of water. That is why it appears diluted, but it is full of nutrients for the baby.”

There also appears to be a widespread association of baby fat with health and wellbeing. Hassan says that mothers are often surprised when obese babies develop anemia. “They are happy with the size of a chubby baby as a result of artificial feeding, compared to babies who breastfeed and are of a smaller size. In fact, babies who feed on infant formula have an apparently fuller body but without better immunity or health. It is just empty chubbiness.”

One in every five children in Egypt is well below normative height projections and with bowed legs, according to the 2014 DHS. The survey explains that dwarfism is a sign of chronic malnutrition, and that its rate has been on the increase in Egypt since 2000. Rates of anemia among women and children have also increased, as has the percentage of children below a healthy weight due to acute malnutrition.

Younis says that the increased rates of dwarfism, asthma, and allergies in Egypt are a result of the increased dependence on infant formula and the move away from breastfeeding.

But Hassan contends that the main cause is poverty. “Anemia begins in childhood for many poor women and is associated with malnutrition and menstruation – which might be excessive. And often no medical assistance is sought. So women reach the stage of childbearing in a weak general condition, often not knowing that they have anemia or other conditions related to malnutrition.” 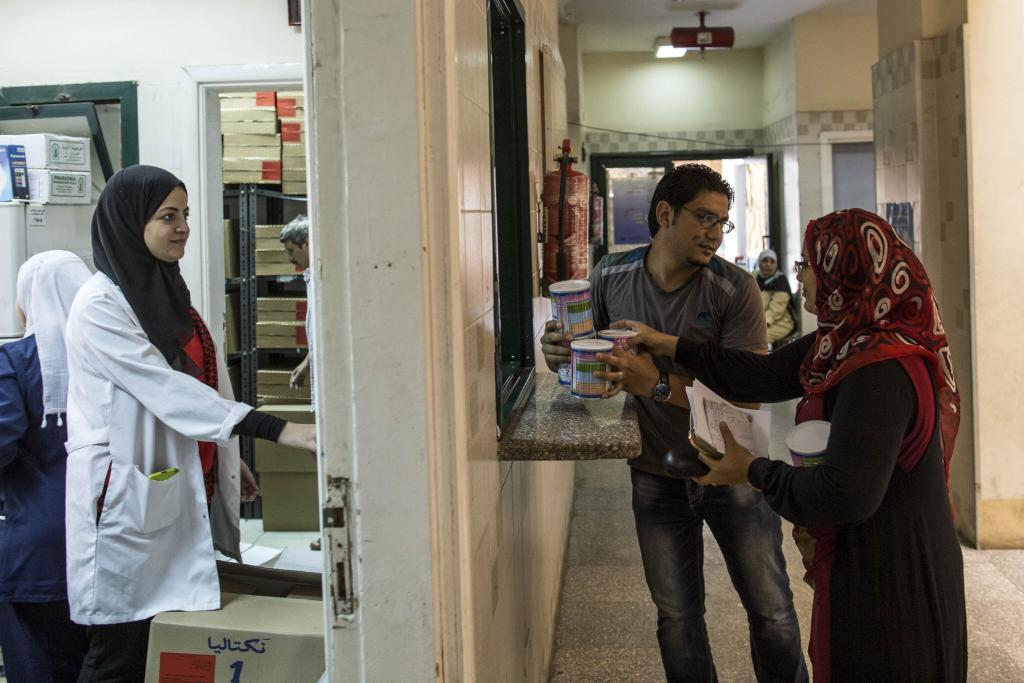 In the context of an economic and social context that discourages breastfeeding, infant formula has become one form of nutrition subsidized by the state. But like many other subsidized goods, there have been shortages in recent months. At the beginning of September, mothers demonstrated to demand access to subsidized formula, after the minister decreed that it would be distributed exclusively through the state’s Motherhood and Childhood Care centers, which have themselves seen shortages.

Even without shortages, the subsidy system for infant formula is far from smooth. A child is entitled to 61 packages of formula in the first year of its life: 40 in the first six months and the remaining 21 in the rest of the year. There are three conditions to access subsidized formula: the mother is deceased, suffering a dangerous illness, such as cancer, or has delivered triplets. Mina calls these stipulations arbitrary.

In some cases, the nurse examines the breasts of the mother to ensure that she cannot breastfeed, which became the subject of debate in September, alongside the issue of infant formula shortages.

A doctor at the Gharbiya Motherhood and Childhood Care center, speaking on condition of anonymity, indicates a recent trend that she and her colleagues have noted in rural areas, which has lead to increased demand for subsidized formula: “Some mothers, especially young ones, choose artificial feeding upon the advice of pediatricians who tell them to buy certain infant formula brands sold by those doctors or related pharmacies.”

The mothers soon realize the infant formula is unaffordable and turn to the child centers for the subsidized product. “But when we examine them, we find they have milk in their glands, and they therefore do not qualify for the subsidized formula.”

“We can only apply the law,” the doctor goes on, explaining that this leaves them with their hands tied. She explains that there are many reasons that mothers turn to artificial feeding, including ill health, but the main one is the need to work.

“A mother who works in the public or private sector only gets a short leave, and the mother who works in other fields may not get any leave at all, especially if she is the primary wage earner at home,” she explains. “In this case her demand for subsidized formula is legitimate, but what can we do?”

AD
You Might Have Missed
Carbon Colonies & A Green New Deal
What we talk about when we talk about trees
Mugamma revisited: Reimagining the building and the square
Where do old lesbians go to die?
AD
Karoline Kamel
24 articles on Mada