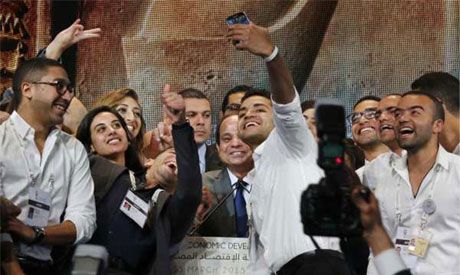 Several democratic parties have declared a boycott of the first National Youth Conference organized by the presidential office, which will be held in Sharm el-Sheikh on October 25. President Abdel Fattah al-Sisi is expected to attend.

In a statement released on Friday, the Popular Socialist Alliance Party, Popular Current, Strong Egypt, Al-Dostour and Al-Karama parties said they respected the decision of their young members to boycott the event. They wrote that they refused to take part in a conference that is geared toward photo opportunities and “distracts from the real problems like price increases, the lack of basic services, the sharp decline in basic rights and freedoms, the imprisonment of young people, and violations of freedom of expression.”

Sisi first announced the conference during Egyptian Youth Day celebrations on January 9, declaring 2016 “the year of the youth.” The president pledged to assign various state institutions to hold dialogue forums with young people that would culminate in the national youth conference in Sharm el-Sheikh.

He claimed that this process aimed to “be an effective nucleus for a real channel of communication between young people and the state that includes a genuine exchange of visions and opinions, and will result in the development of a shared vision.”

According to the presidential press office, 3000 young people from diverse social backgrounds are expected to participate in the three-day conference alongside public figures such as world-renowned scientist Farouk al-Baz.

The program includes 23 sessions on various political and social matters, in addition to an art gallery and a talent show.

Human rights organizations have repeatedly denounced the sharp crackdown on freedom of expression and association in Egypt over the last three years, cited by the parties as a reason for the boycott. Several civil society organizations have been prosecuted and hundreds of people, including minors, have been detained in the crackdown.

Topics
Related
youth
Loyal youth, model citizens
Laura Bird | Young citizens have historically been positioned by the state as a priority due to the threat of their
April 6 Youth Movement
Sisi: 2016 will be the year of Egyptian youth
President Abdel Fattah al-Sisi announced a number of plans to empower Egypt’s youth in his speech to