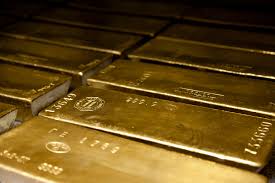 Traders say prices of the precious metal have doubled in Egypt since the beginning of 2016, reaching LE530 to LE540 per gram this week, compared to an average of LE260 per gram in January, amid an economic crisis that has taken its toll on the industry.

One trader cited an 80 percent rise in gold bar sales in the last month alone, while another saw sales double.

“Demand for jewelry has slumped in recent months,” Wasfy Wassef, head of the jewelry division at the Chamber of Commerce, says. “Sales have fallen dramatically since mid-2015, and now customers mostly buy gold bars,” explains Malak Daniel, a partner at Wassef’s jewelry shop. Traders attribute the slump in sales to the dollar crisis and increasing global prices.

Global gold prices increased by 14 percent to US$1,270 an ounce ($40.84 per gram) on Thursday, compared to $1,115 ($35.85 per gram) in January this year, according to inflation-adjusted data compiled by charts website MacroTrends.

Demand for gold bars, however, has surged in the last two months, particularly since speculation the pound will be floated soon, Daniel says.

One trader cited an 80 percent rise in gold bar sales in the last month alone, while another saw sales double.

Egypt has been struggling with a currency crisis since the uprising in 2011 and subsequent violent episodes have discouraged foreign investors and tourists, two of the country’s main sources of hard currency.

The official exchange rate has fallen by almost 14 percent since the beginning of 2016, while the unofficial rate fell by half its value from around LE7.8 per dollar in mid-January to around LE15 per dollar this week.

Since the International Monetary Fund approved a US$12 billion loan to Egypt in August, conditioned on a number of economic reforms, speculation about the floating of the pound has contributed to a plunge in the unofficial exchange rate, which hit a record LE16 pounds to the dollar last week.

Egyptian gold prices reached LE350 per gram in 2013. Amid political and economic instability, people bought gold in large quantities, says Ramy Fikry, a wholesale manager. But as global prices plunged, the cost of the precious metal dropped to LE240 per gram and they lost their investment, Fikry explains.

Egypt’s gold wholesalers have been turning to Switzerland and Gulf countries for help.

“We stopped buying new merchandise because we are suffering from a stagnant market,” Daniel says, adding, “People are selling their jewelry to meet their needs.”

Egypt’s fiscal reform plans, which began in 2014 as President Abdel Fattah al-Sisi took office, including new taxes and the cutting of energy subsidies, have caused inflation to soar.

Households already struggling with surging prices will likely feel the pinch even more with planned subsidy cuts and a newly implemented Value Added Tax. Inflation rates of 17.3 percent are predicted for 2017, compared to 14 percent this September.

“We only buy from people who sell their jewelry now, because we do not have enough demand to buy new merchandise,” says Mahmoud Awad, a trader in downtown Cairo.

Egypt’s gold wholesalers have been turning to Switzerland and Gulf countries for help.

Amin, who has been in the business for almost half a decade, hasn’t imported new gold in almost a year now, and returned his stockpiles to Switzerland, a move he says proved profitable due to the falling value of the pound.

“We are currently exporting our raw materials to countries such as Saudi Arabia, Switzerland and Dubai, because there is an oversupply of gold,” explains Rafik Abbasy, head of the jewelry division in the Federation of Gold Industries.

AD
You Might Have Missed
Where do old lesbians go to die?
Mugamma revisited: Reimagining the building and the square
Carbon Colonies & A Green New Deal
What we talk about when we talk about trees
AD
Waad Ahmed
28 articles on Mada

Topics
Related
devaluation
Devaluing the Egyptian pound, a closer look
Luiz Sanchez | The Central Bank of Egypt froze the exchange rate of the pound on Tuesday at LE8.78 to the dollar, having
devaluation
Egyptian pound to be floated within hours: Beltone Financial
Investment bank Beltone Financial predicts Egypt’s Central Bank will weaken the Egyptian pound tomorrow
austerity measures
IMF conditionality: Does it even matter?
Isabel Esterman | Does it really matter whether austerity policies are dictated by the IMF, or are the result of officials
VAT
Egypt’s value-added tax, explained
Mohamed Hamama | What's in ‪Egypt‬'s new value added tax, and how will it affect consumers? We tackle your questions