اقرأها بالعربية
On the edges: Nubians still live in the shadow of displacement

“Take her to the bank of the Nile and make sure you drop her off by the boat that goes to Sheikh Fadl,” a middle-aged man sporting a dark grey galabeya and a white cotton scarf tied loosely around his neck, whom I met only moments before on a crowded bus in Gharb Soheil, tells a tuk tuk driver.

“Call me when you get to where you’re going,” he says as he shoves a wrinkled five-pound bill in the driver’s hand.

Gharb Soheil, a Nubian village often sought out by tourists, is home to approximately 2,000 Nubians, descendants of those forcibly relocated between 1902, when the Aswan Low Dam was built by the British, and when its height was raised for the first time, in 1912.

A little over an hour later, I reach the Nubian village Sheikh Fadl, which is on the other side of the Nile from Gharb Soheil, and arrive at the yellow-painted mud house of Nubian organizer Magdy al-Daboudy. While the mud houses in Gharb Soheil are repainted regularly with vibrant colors, the houses in Sheikh Fadl are all a solid shade of faded yellow.

“Have some water,” Daboudy’s wife, Zeinab, offers. “It’s clean. Up until recently, we were drinking out of a canal because the tap water was salty.”

Sheikh Fadl is one of several Nubian displacement villages, located in the midst of an expansive desert. It is populated by approximately 5,000 Nubians, the majority of whom were forcibly relocated from their lands in Dabood and Maliki, two villages in Old Nubia, when the height of the Aswan Low Dam was raised in 1933.

According to its residents, Sheikh Fadl — due to the lack of infrastructure and government services — is unlivable, pushing many of its residents to either seek life in Cairo or move out of Egypt altogether.

“Since 1933, we have not had any reparations,” Daboudy says. “We’ve been pulled away from our lifelines — the Nile and our gold mines — and pushed to the outskirts, where there are no jobs, no land to farm and no schools to teach or learn in. The lands that can be farmed are inhabited by locals from Upper Egypt, and the schools here do not go beyond the elementary level.”

Daboudy adds that the government-run school in Sheikh Fadl does not teach Nubian history or any Nubian languages — only Arabic — despite the fact that the village inhabitants are all Nubian. This, he says, contributes to an erasure of Nubian culture and history in Egypt and makes it difficult for younger generations to understand themselves and embrace their Nubian identity.  Although children, for example, understand the Nubian languages, they speak in Arabic.

People say their complaints about their living conditions fall on deaf ears. Daboudy points to a desert expansion in Sheikh Fadl, where a large population of younger Nubians had lived, that was taken over by outsiders in the past few years. Despite their many complaints and protests, the police and law enforcement agencies in Aswan have failed to respond.

“Our demands are simple,” Daboudy says. “We want President Abdel Fattah al-Sisi’s government to revoke Decree 444, which categorizes 27 Old Nubian villages that are rich with gold mines as military zones, and grant us the right to return to Old Nubia and to exist, freely as Nubians.” 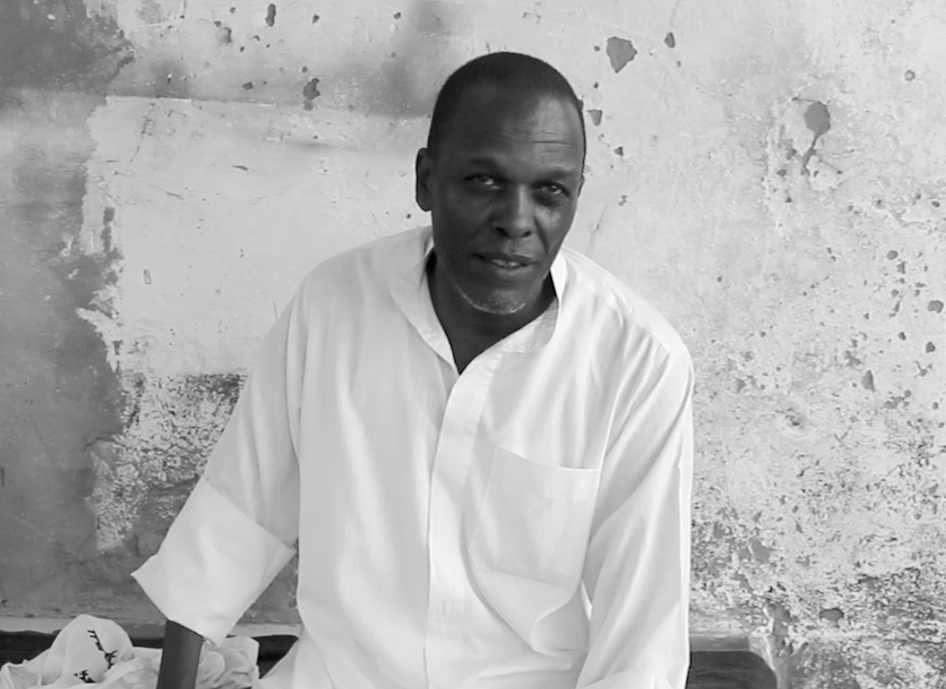 “Before we were forced out of our lands, we mined gold, because our land was rich with it,” Magdy al-Daboudy, who lives in Sheikh Fadl, says. “But now that land — our land — is a military zone, accessible to only a small handful of people and foreign companies. If this land had gone to Egyptian civilians, it would have been easier to forgive this grievance against us. But our land is feeding the elite.” 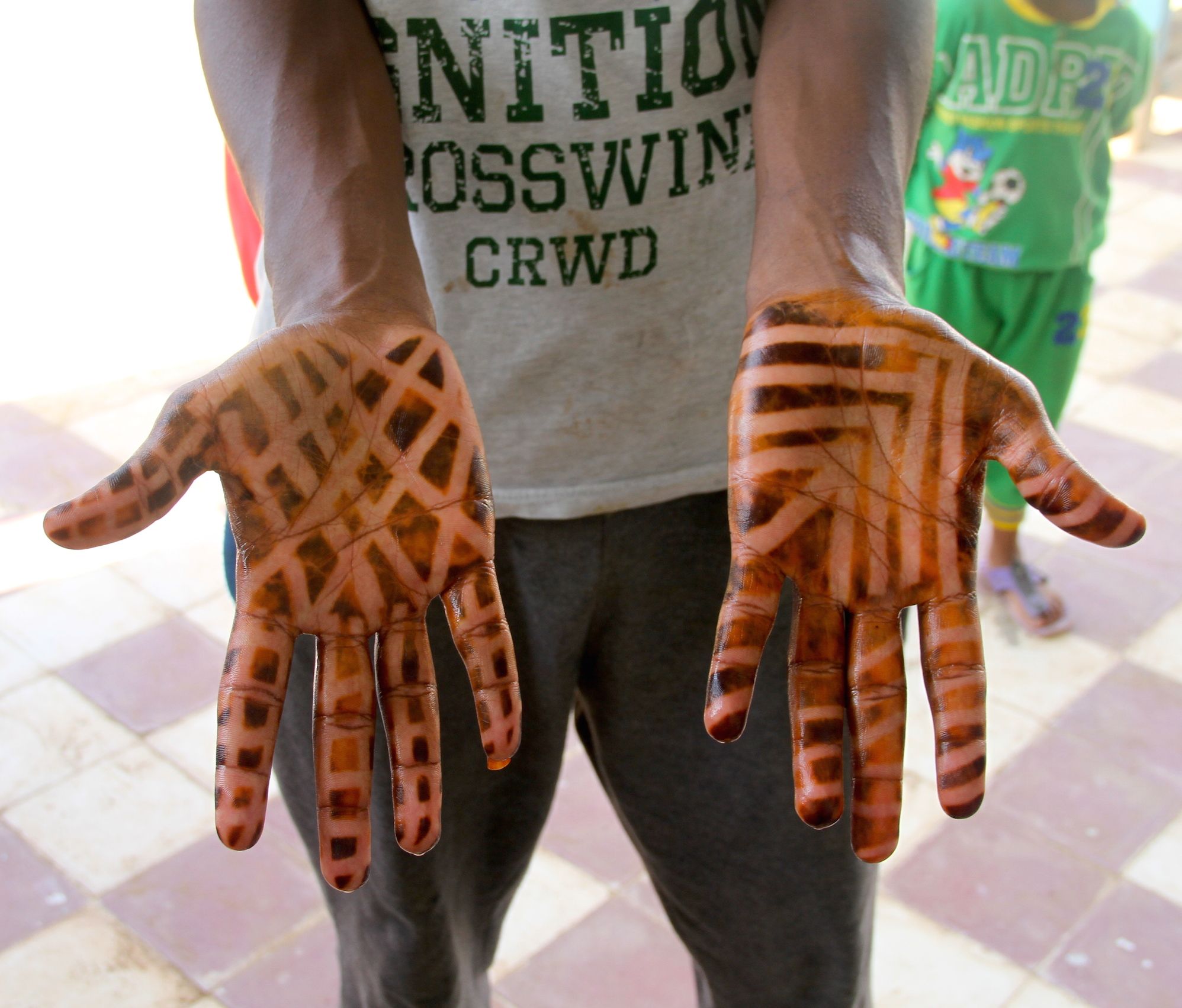 Mohamed Jomaa, 20, shows off his henna, drawn for him to celebrate his brother’s wedding. Wedding ceremonies are an important aspect of the cultural life of Sheikh Fadl. 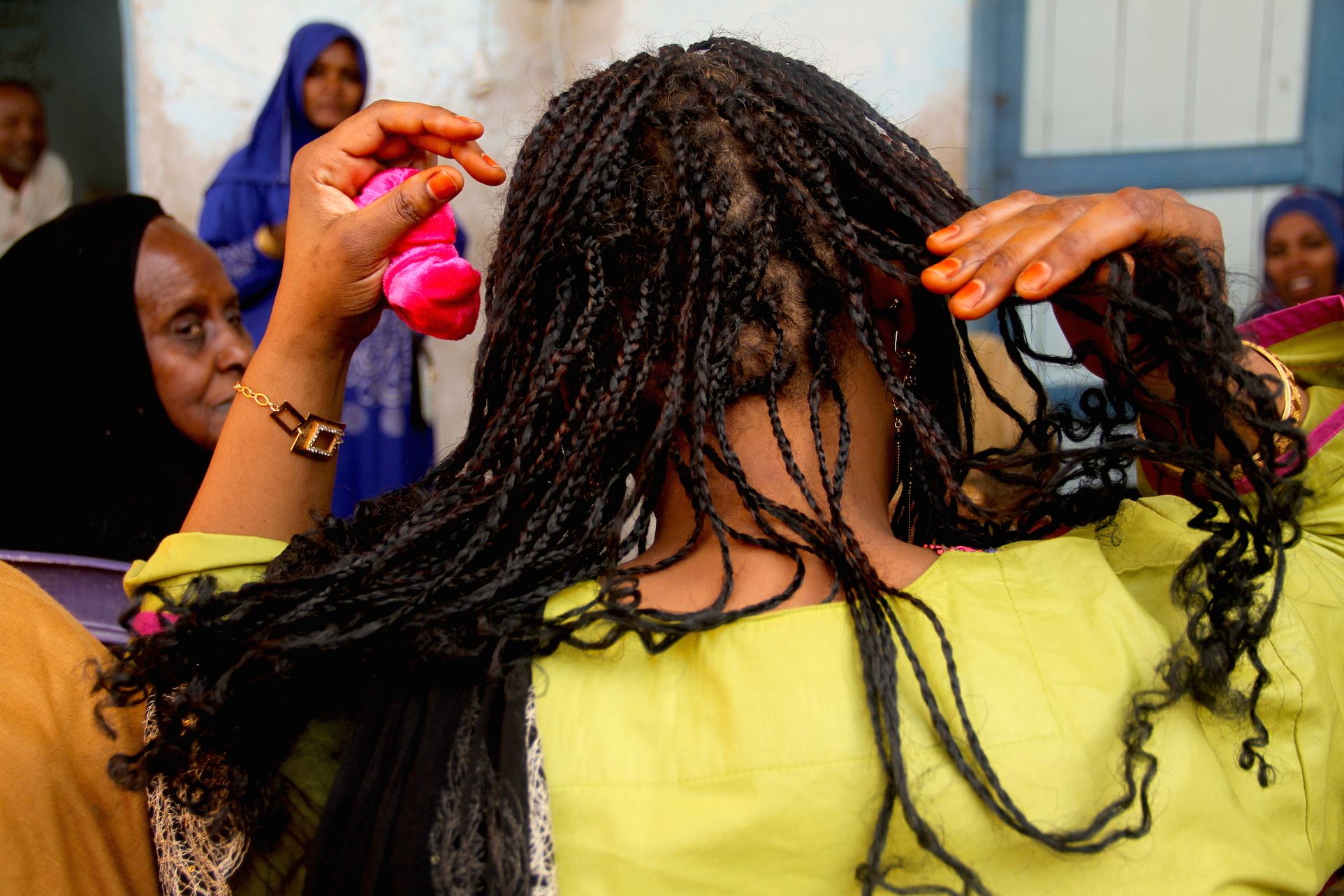 Noor al-Nubia, 30, shows off her braids and her hands painted with henna in preparation for the wedding that evening. 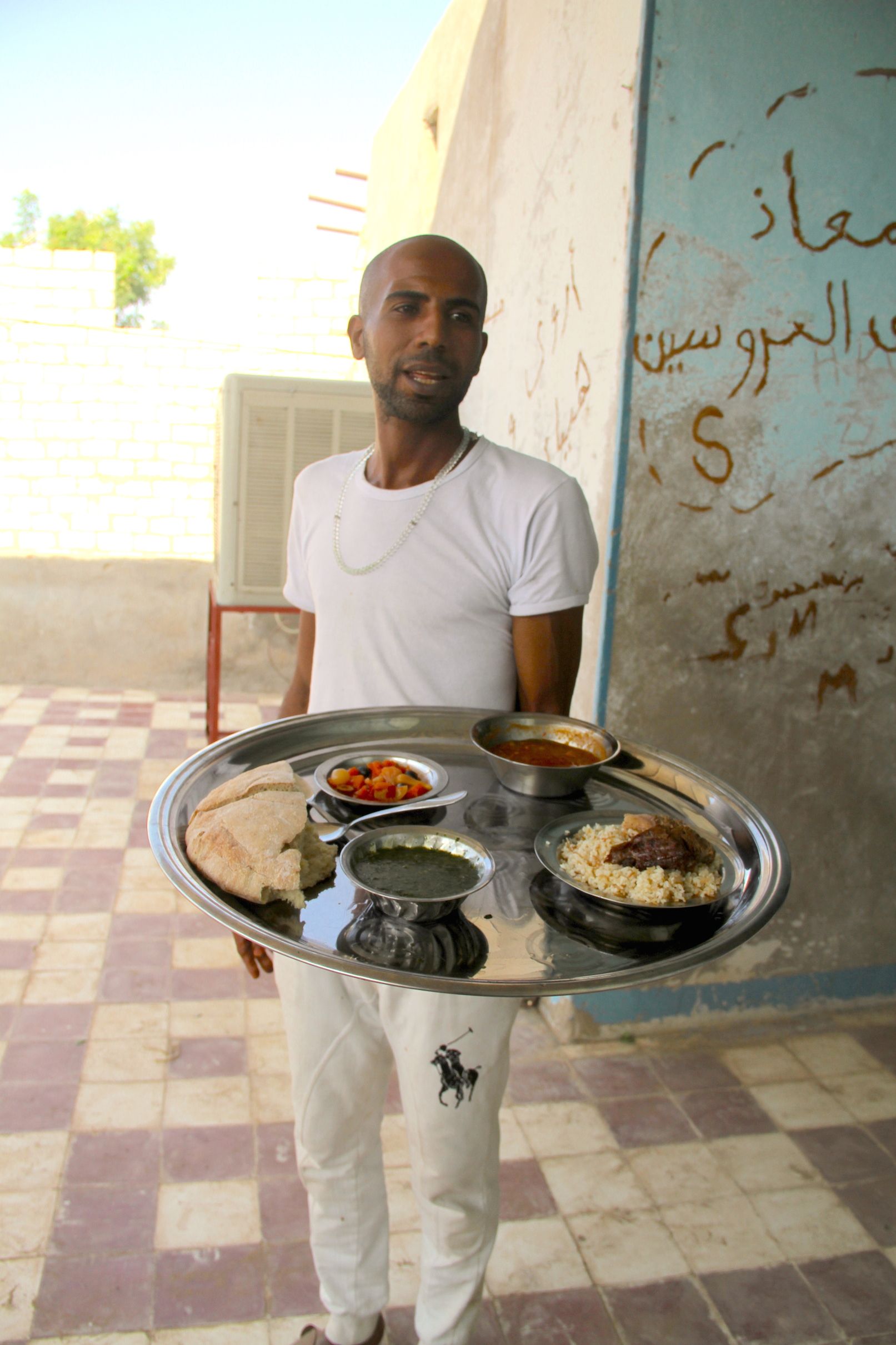 Amr Awad Abdel Basset, 25, participates in the Nubian wedding tradition of distributing a tray of food. The trays of food are paid for by the groom’s family. 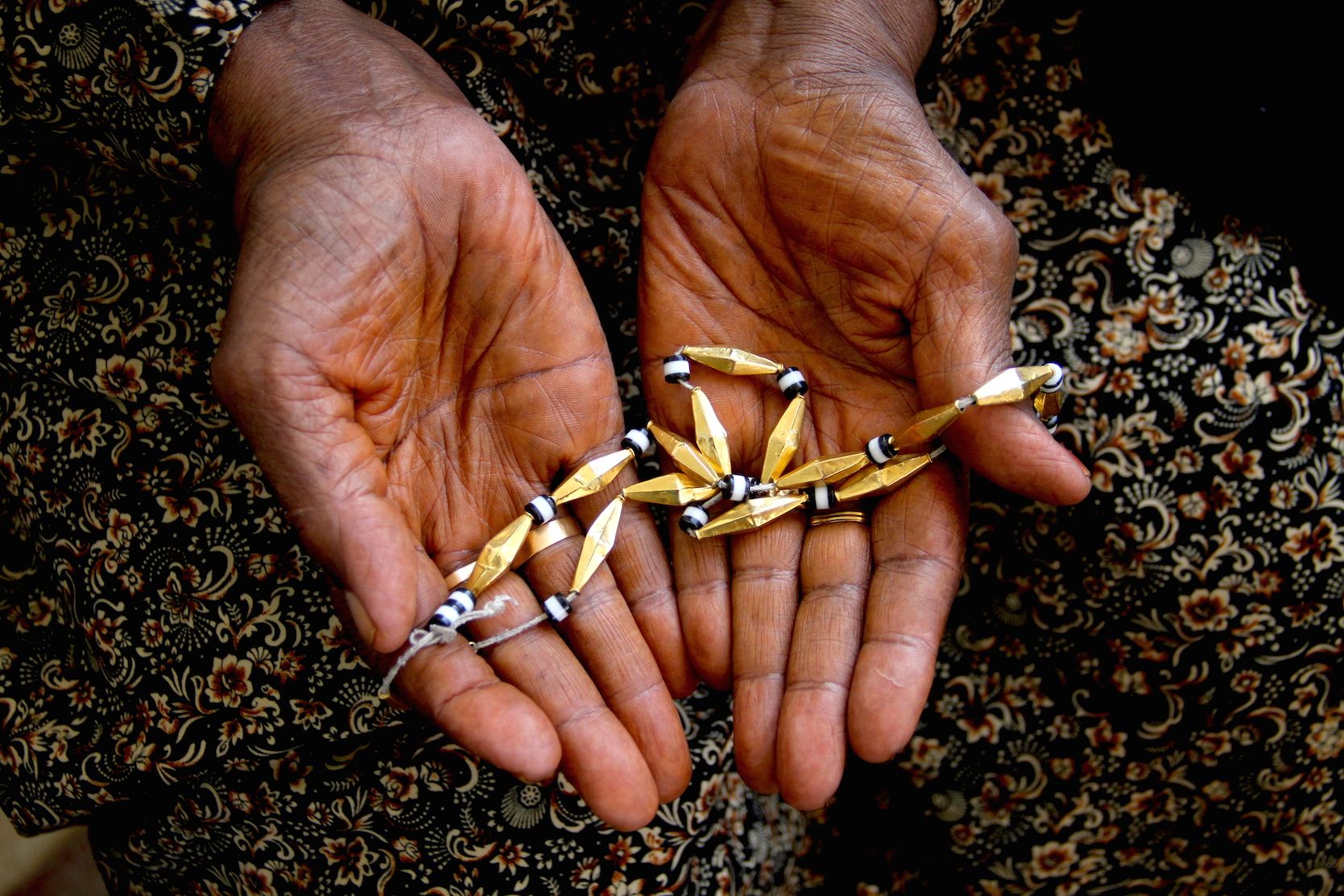 Na’eema Shahata, 75, displays her gold necklace, referred to as “al-za’efa,” which she will wear for the wedding. Shahata, who grew up in Sheikh Fadl and whose parents lived through the 1933 forced migration, says that za’efa necklaces are no longer made or sold in Egypt due to what she sees as deliberate measures to erase Nubian culture, history and existence from Egypt. 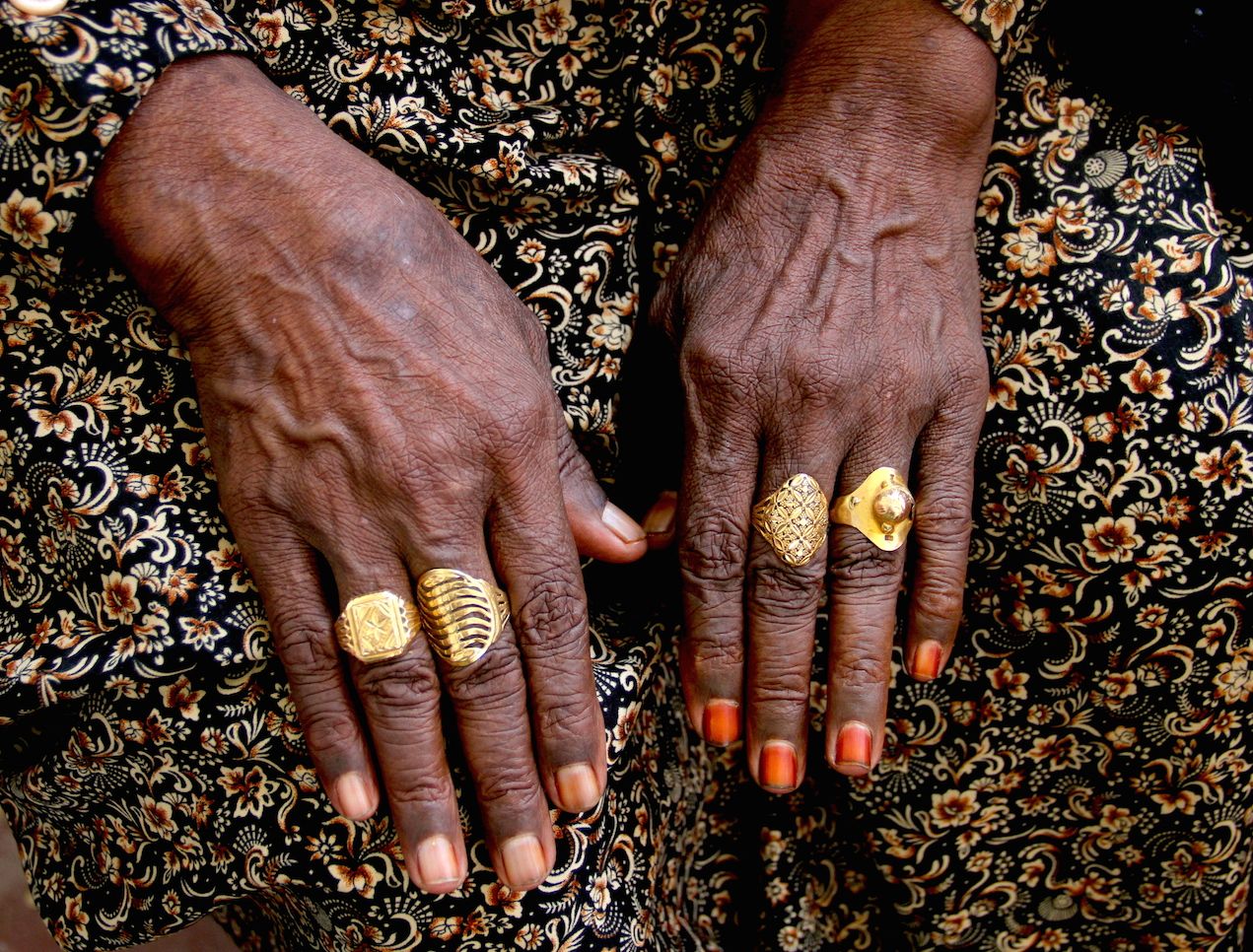 Na’eema Shahata displays her gold Nubian-style rings, which are no longer made or sold in Egypt. 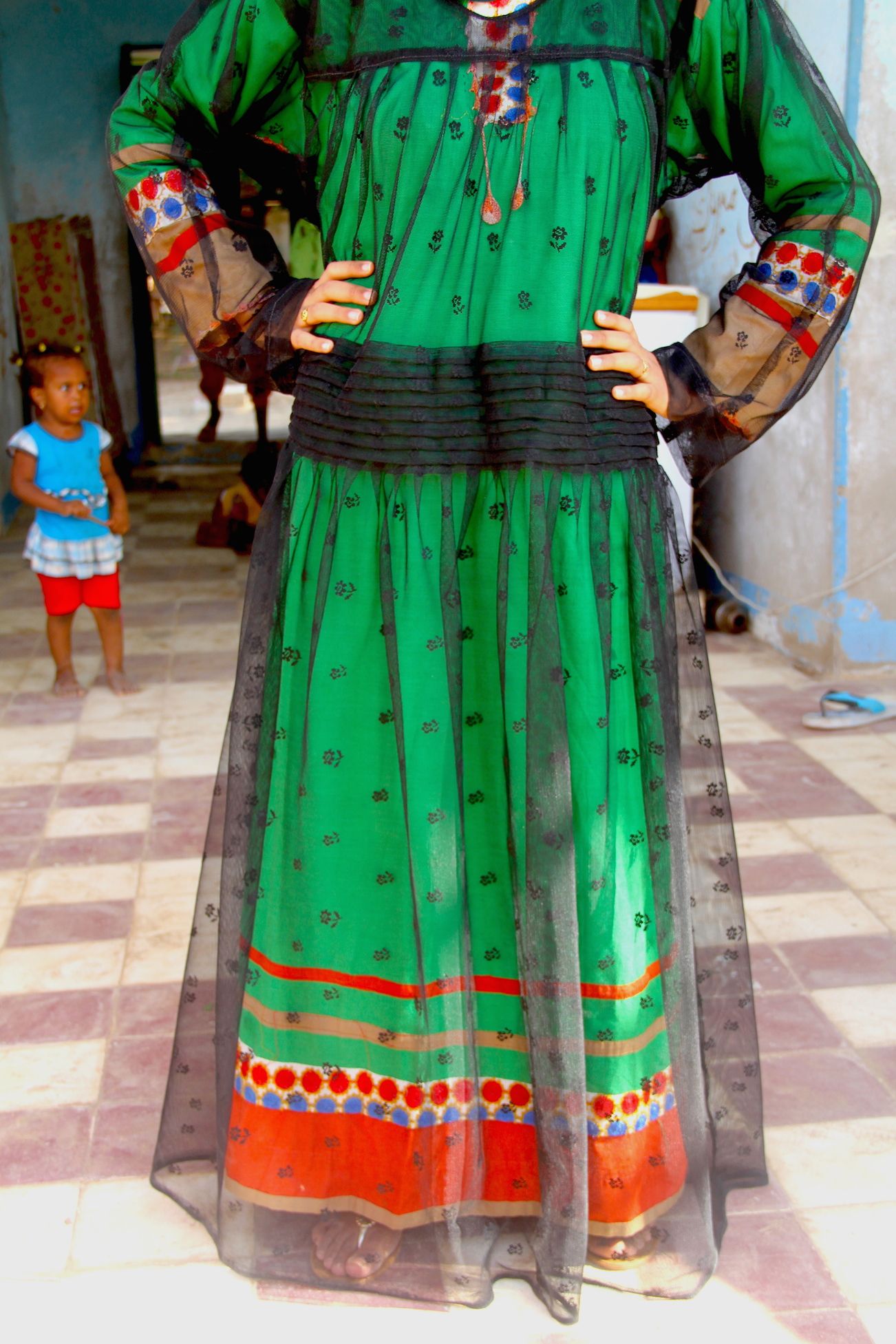 Asmaa Awad, 18, shows off her jarjar, a traditional net-like Nubian dress worn over another dress. 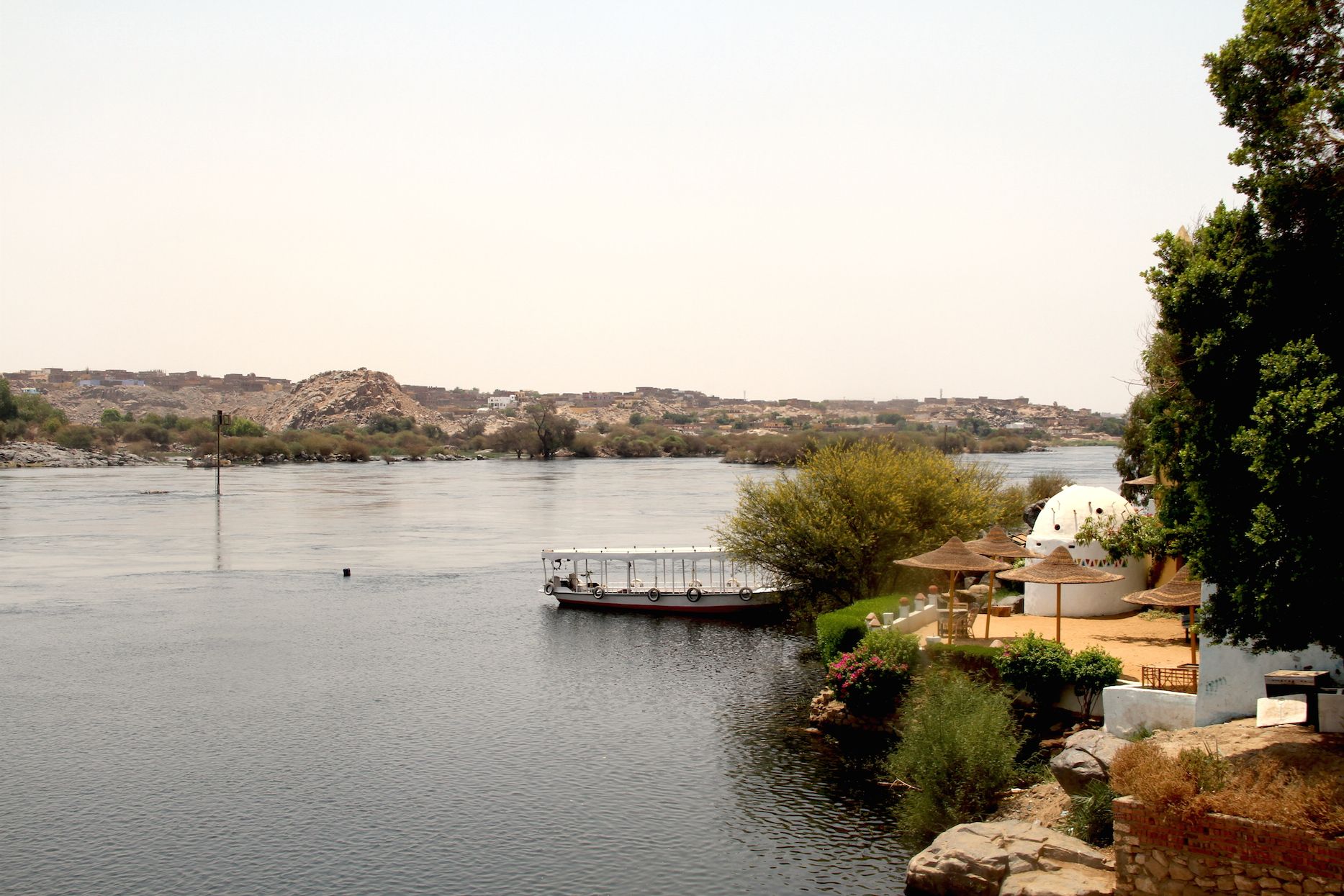 View of the Nile from Gharb Soheil, where the primary source of income is tourism. Across the Nile are other Nubian villages. 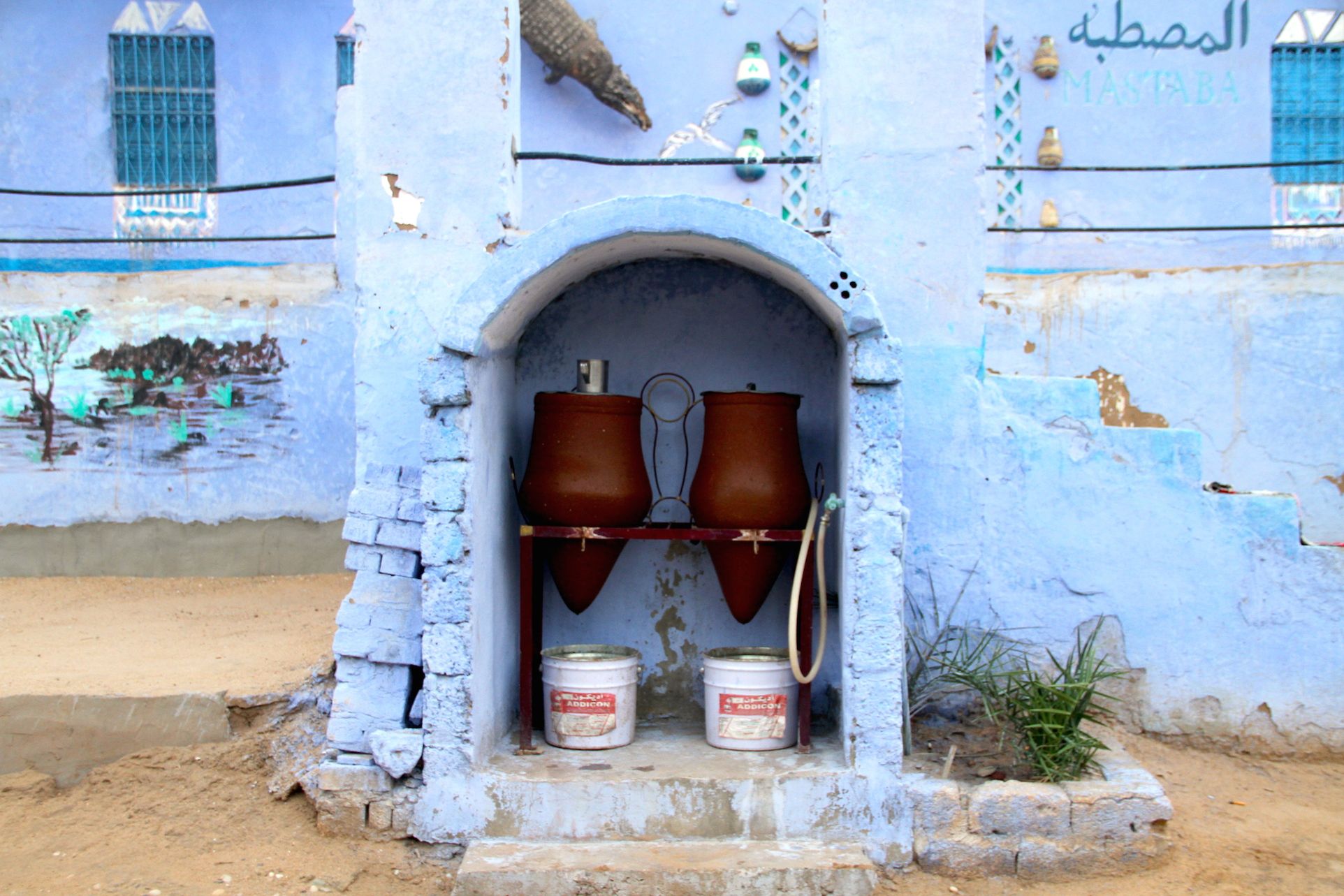 Clay pots carrying water are scattered throughout Gharb Soheil. The pots serve two purposes — to keep water cool and to filter it. Beneath the pots are buckets to catch the unclean water that filters through the bottom. 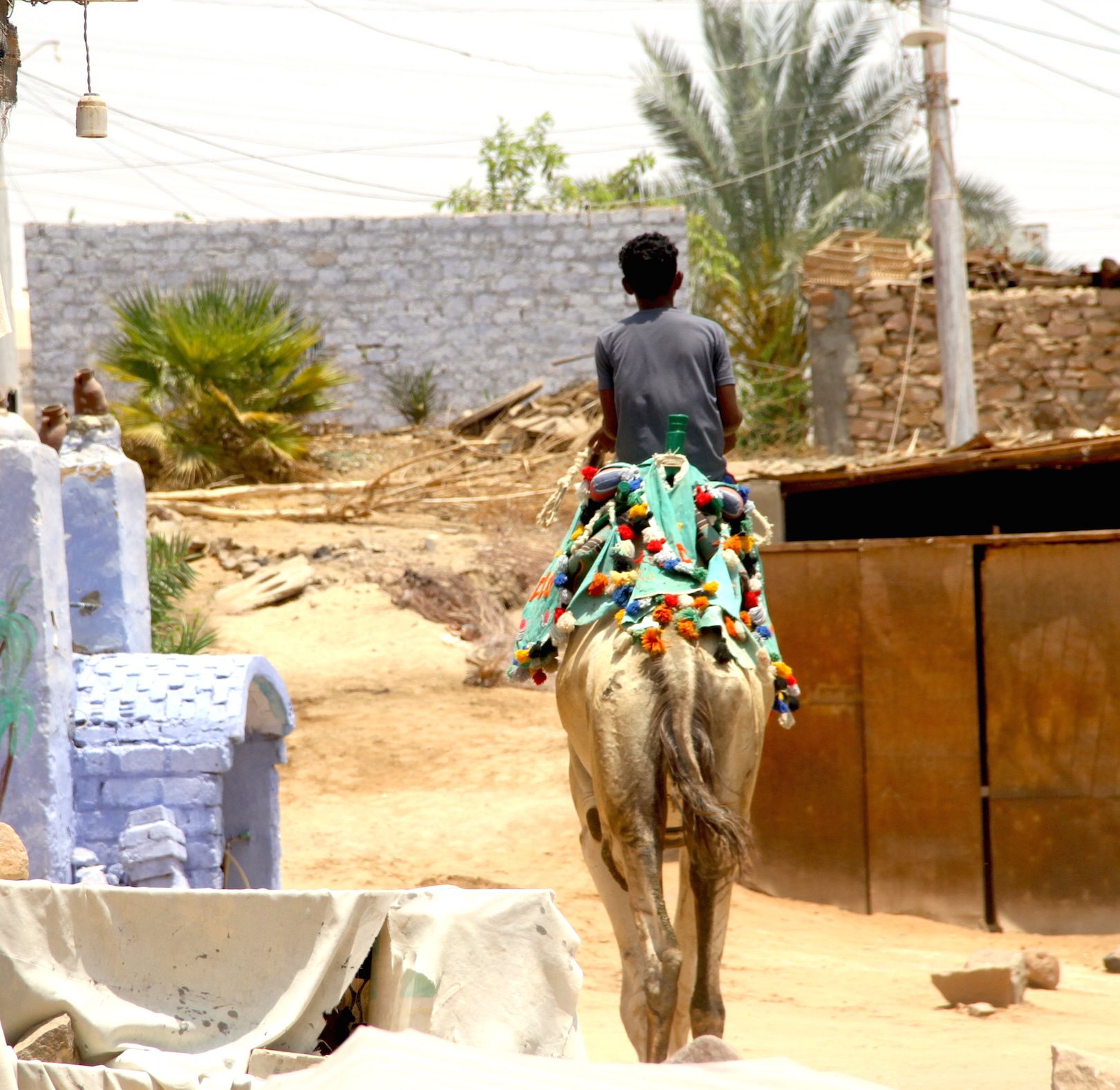 A boy rides a camel in the streets of Gharb Soheil. Camels, motorcycles, and pick-up trucks furnished with couches are the main modes of transport in the village. 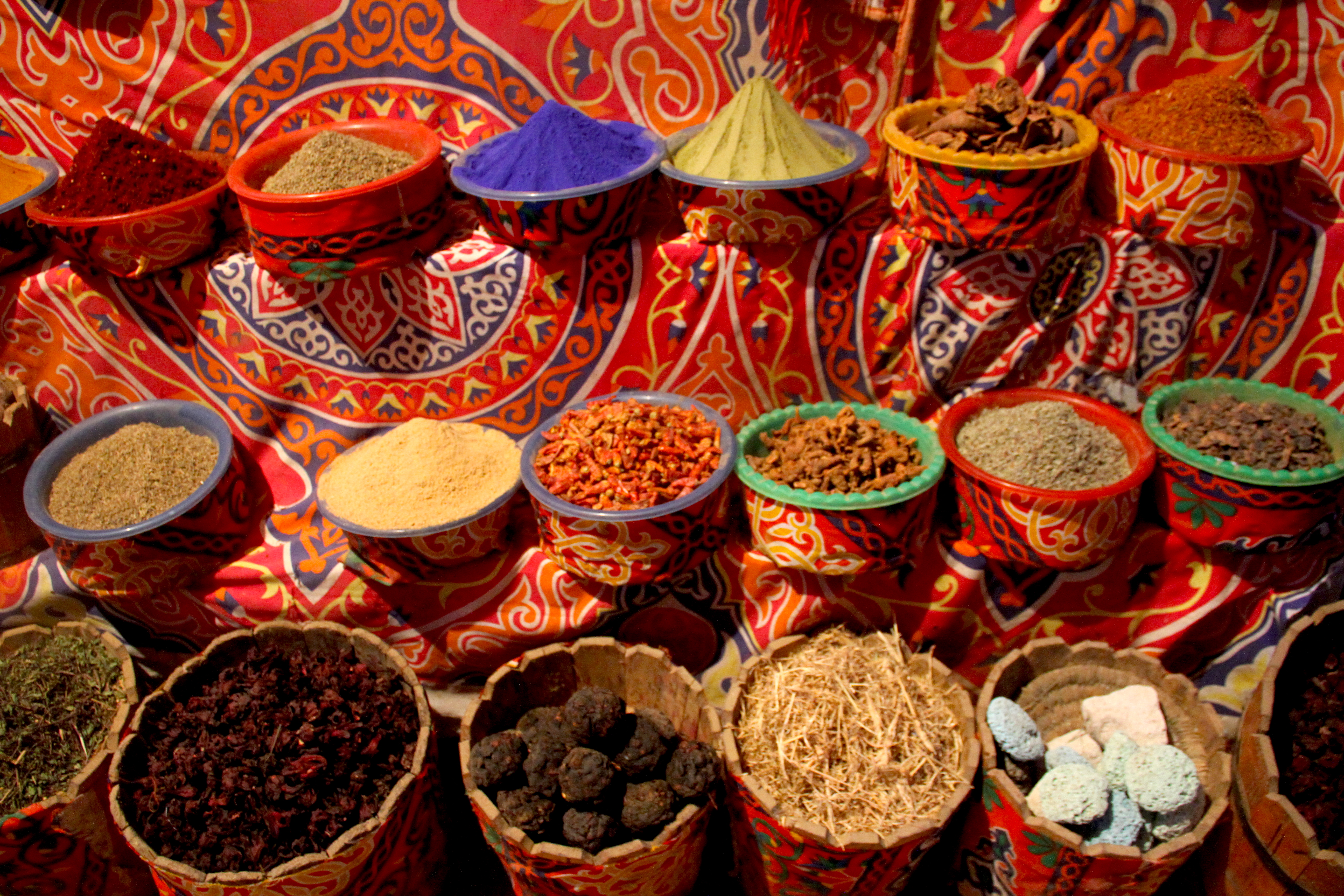 Spices on display at a market in Gharb Soheil, where tourism serves as the backbone of the economy and most villagers earn their incomes by selling handicrafts to tourists and visitors. 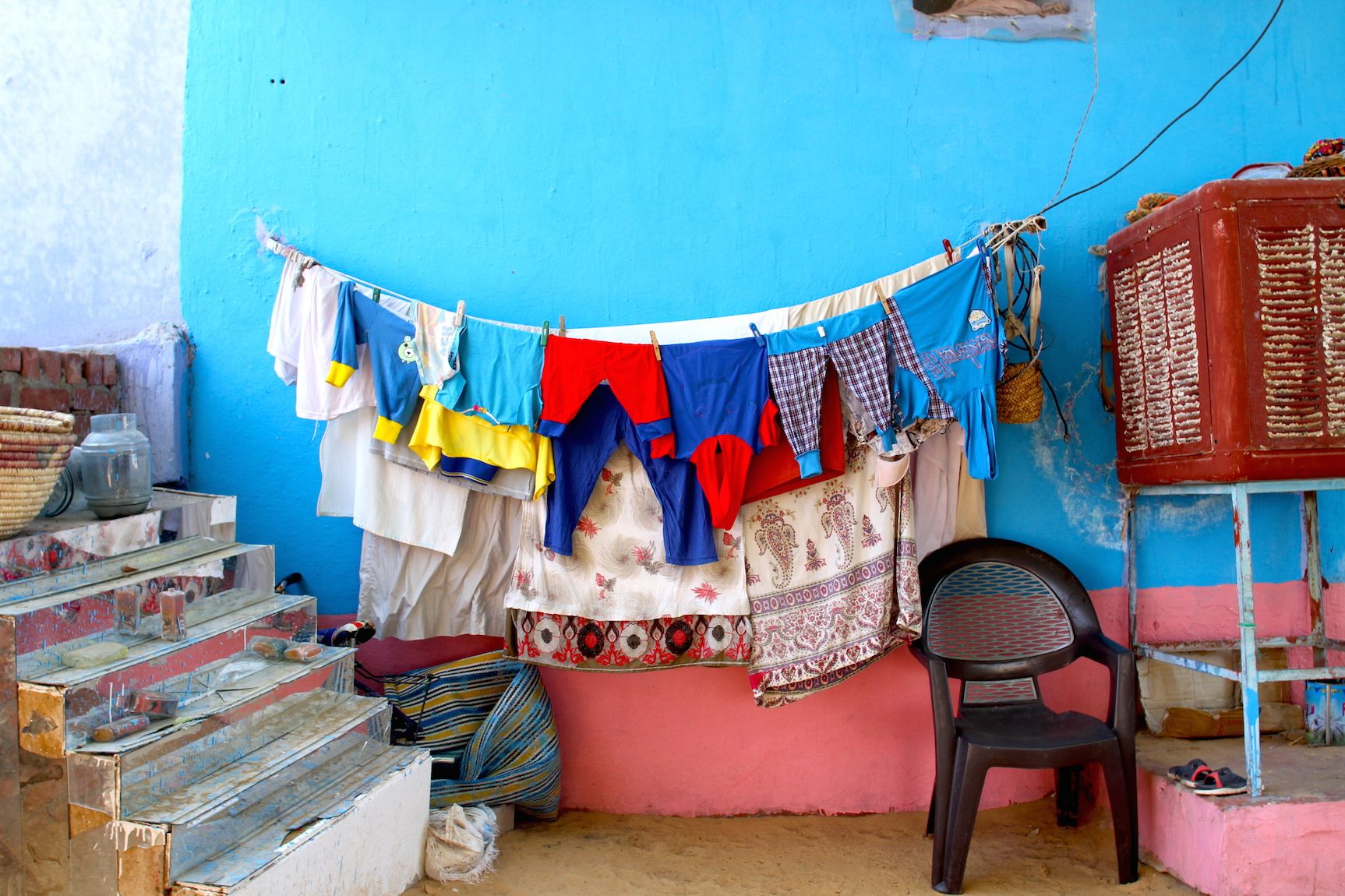 Clothes hang outside a house in Gharb Soheil, where most houses are colored using bright, handmade paints. The houses in Gharb Soheil are partially made of brick, unlike Sheikh Fadl, where they are made entirely of mud. 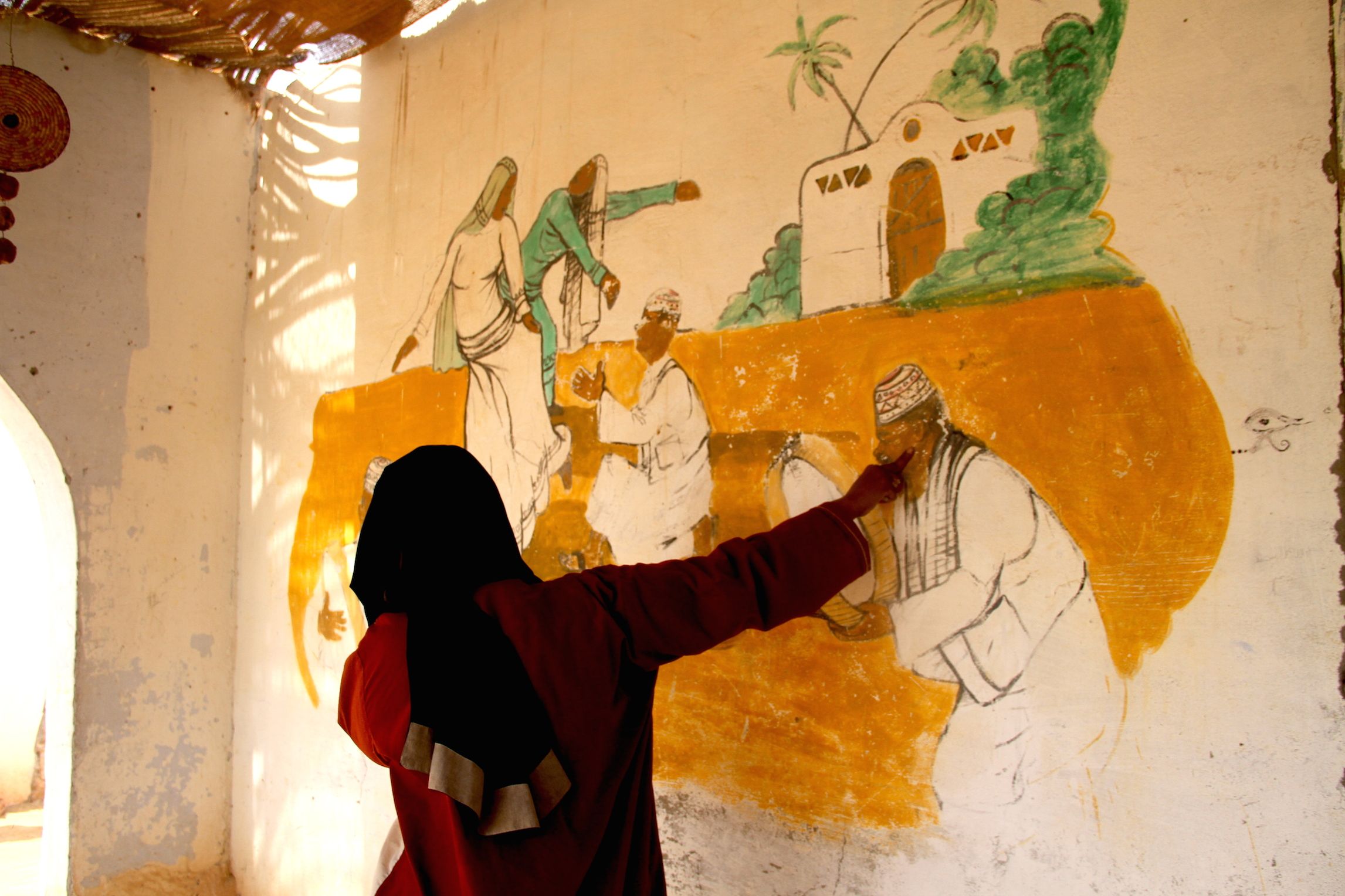 A woman runs her hand along the art inside her house in Gharb Soheil. Every fall, two or three local artists repaint all the houses and decorate them with drawings and paintings.

AD
You Might Have Missed
Mugamma revisited: Reimagining the building and the square
Carbon Colonies & A Green New Deal
What we talk about when we talk about trees
Where do old lesbians go to die?
AD
Dina Sayedahmed
1 article on Mada

Topics
Related
Aswan
26 sentenced to death, 21 to life in prison for Aswan violence
Twenty-six people were sentenced to death and 21 to life in prison for involvement in tribal violence
2015 parliamentary elections
In Nubian village, residents have guarded ambitions for parliament
Heba Afify | Some historical trivia seems to be common knowledge among the inhabitants of Ballana, a small village
History
When home is lost
Heba Afify | In 2012, I met 67-year-old Ahmed Abdallah, a Nubian man who was among those displaced in 1963 to allow