The next generation’s burden
By
Hamada Elrasam

“I want to be a police officer to avenge my father,” says 10-year-old Abanoub Samaan Nazmy, as he turns a toy gun over in his hands. His father was shot dead by a suspected military sniper during protests over the burning of a church in March 2011.

There is a lot of trauma in Egypt from the last few years of political violence, the impact of which may not be fully realized for years. Psychiatrist Eman Gaber, who leads a trauma program in Egypt, says the impact is widespread and impossible to gather any clear statistics on, as “it’s hard for children not to be exposed to any violence,” whether rioting in their neighborhoods or images on television or the internet.

Children are sometimes unable to express themselves, and societal misunderstandings of, and the stigma surrounding mental health problems means they often go without treatment, Gaber explains. 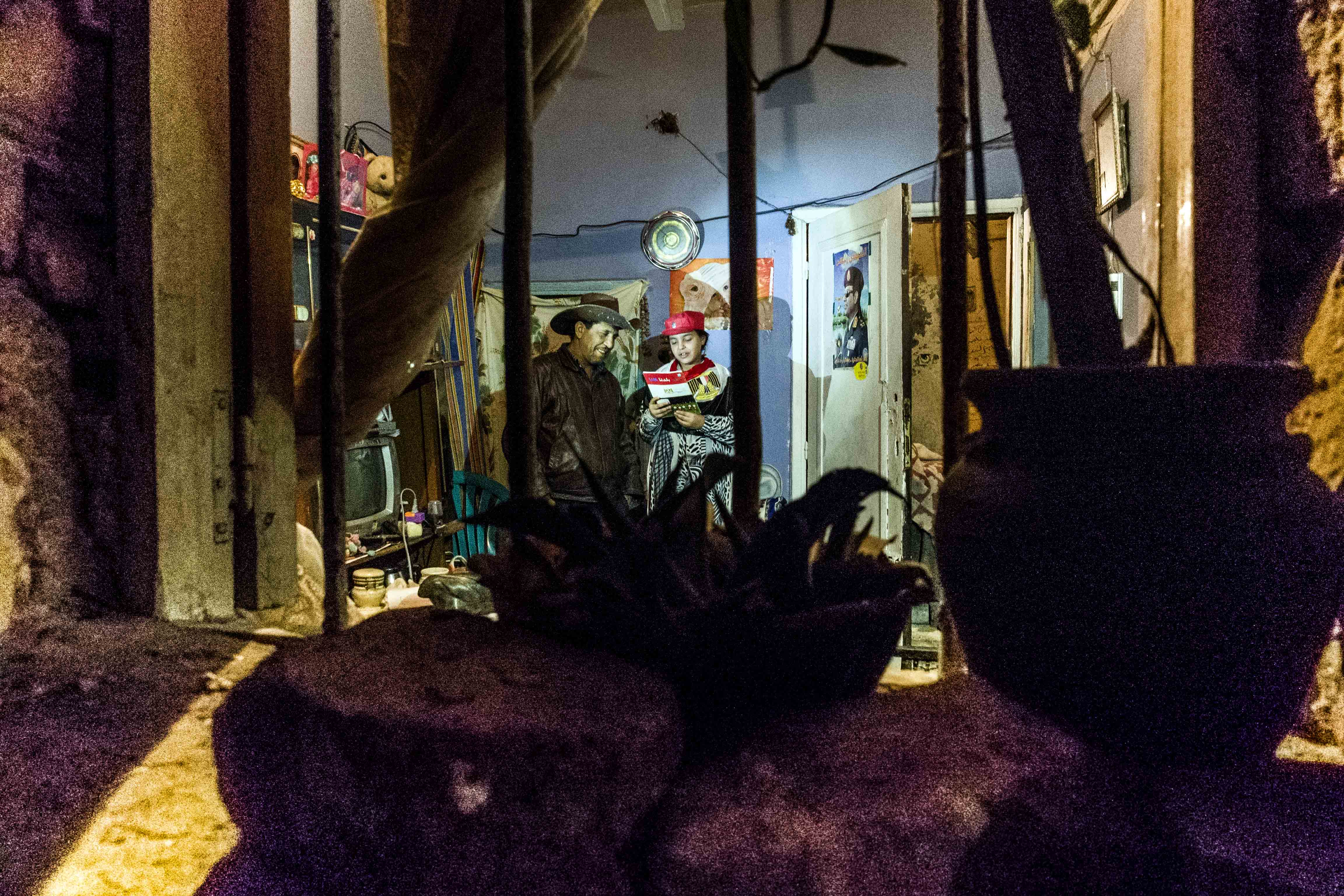 “I dream of being a police officer and inspecting women’s veils,” Gihad Abdo says, amid speculation from some people that Islamists hid weapons in loose-fitting clothing during protests in August 2013 to avoid detection. Abdo recites nationalist songs from her schoolbook, as her father Abdo joins her, at their house in Qasr al-Shamea, Old Cairo. Her father was badly beaten in Tahrir Square in August 2013 for voicing pro-government views while selling stone figures during an Islamist protest. 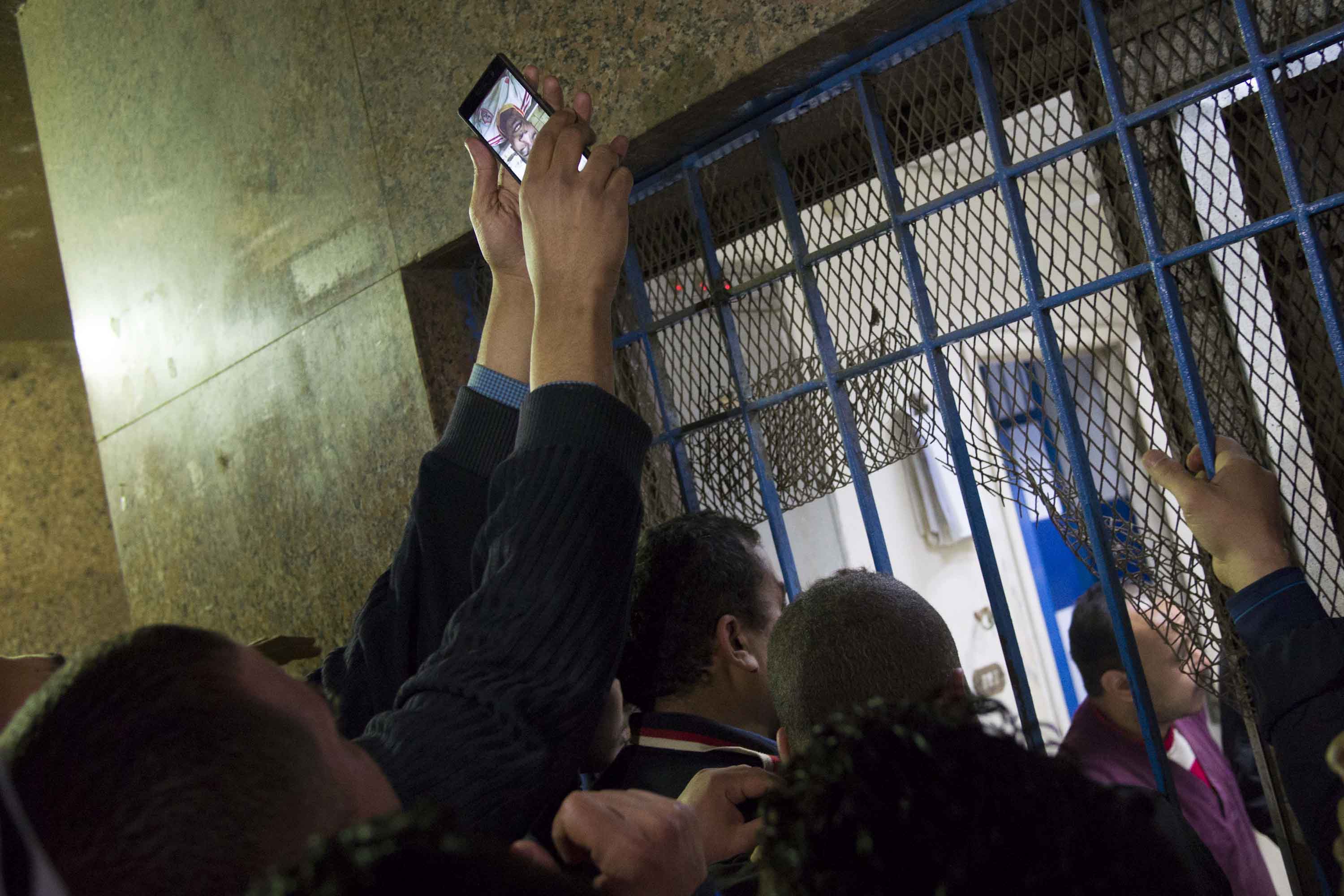 Bereaved families identify their deceased relatives at Zeinhom morgue in Cairo on February 8, 2015, after 28 fans died during confrontations with security forces at the gates of a football league match between Zamalek and ENPPI. 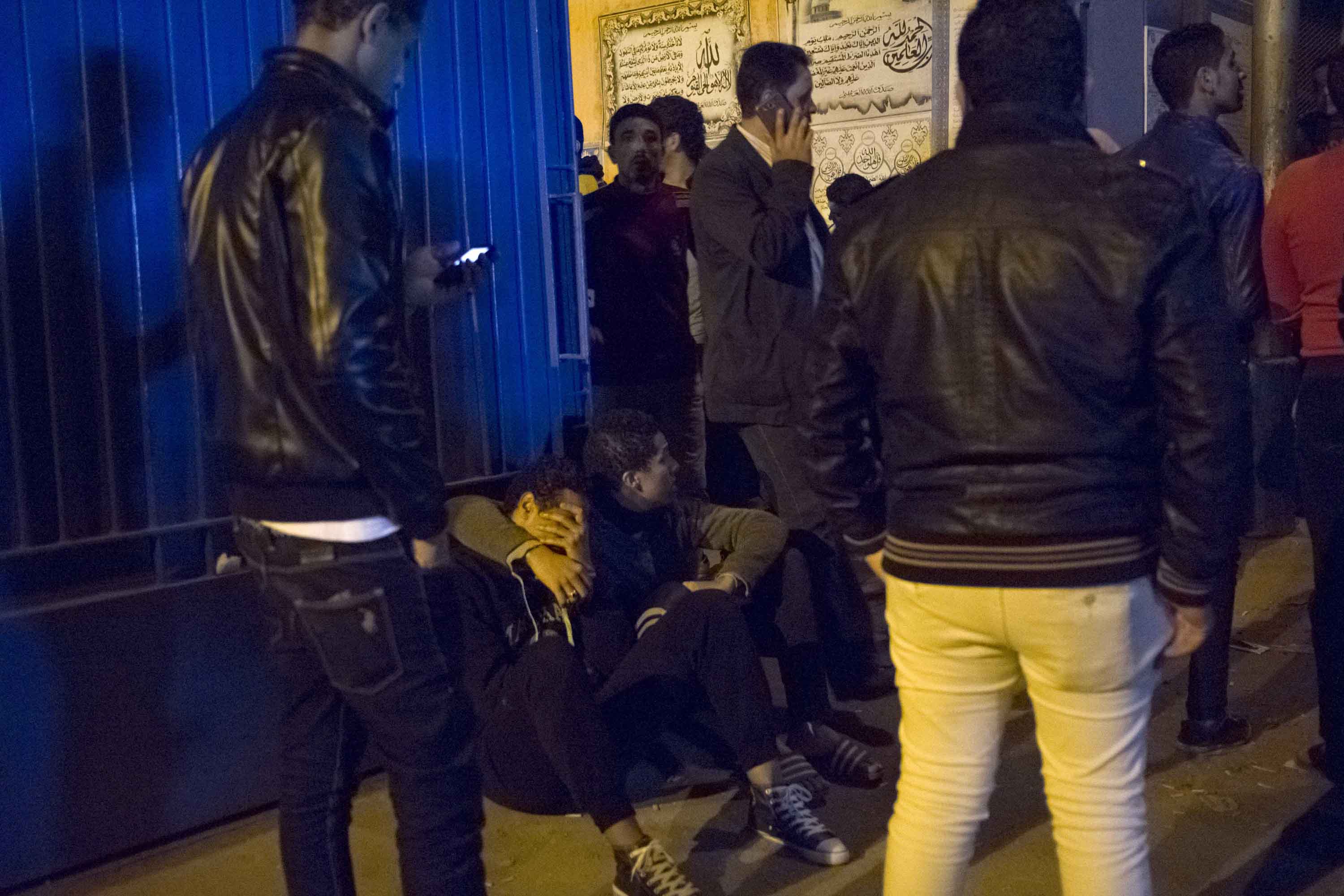 Most people died as a result of suffocation during a stampede outside the Zamalek-ENPPI game on February 8, 2015, as police fired teargas in an attempt to disperse fans trying to get into the stadium. 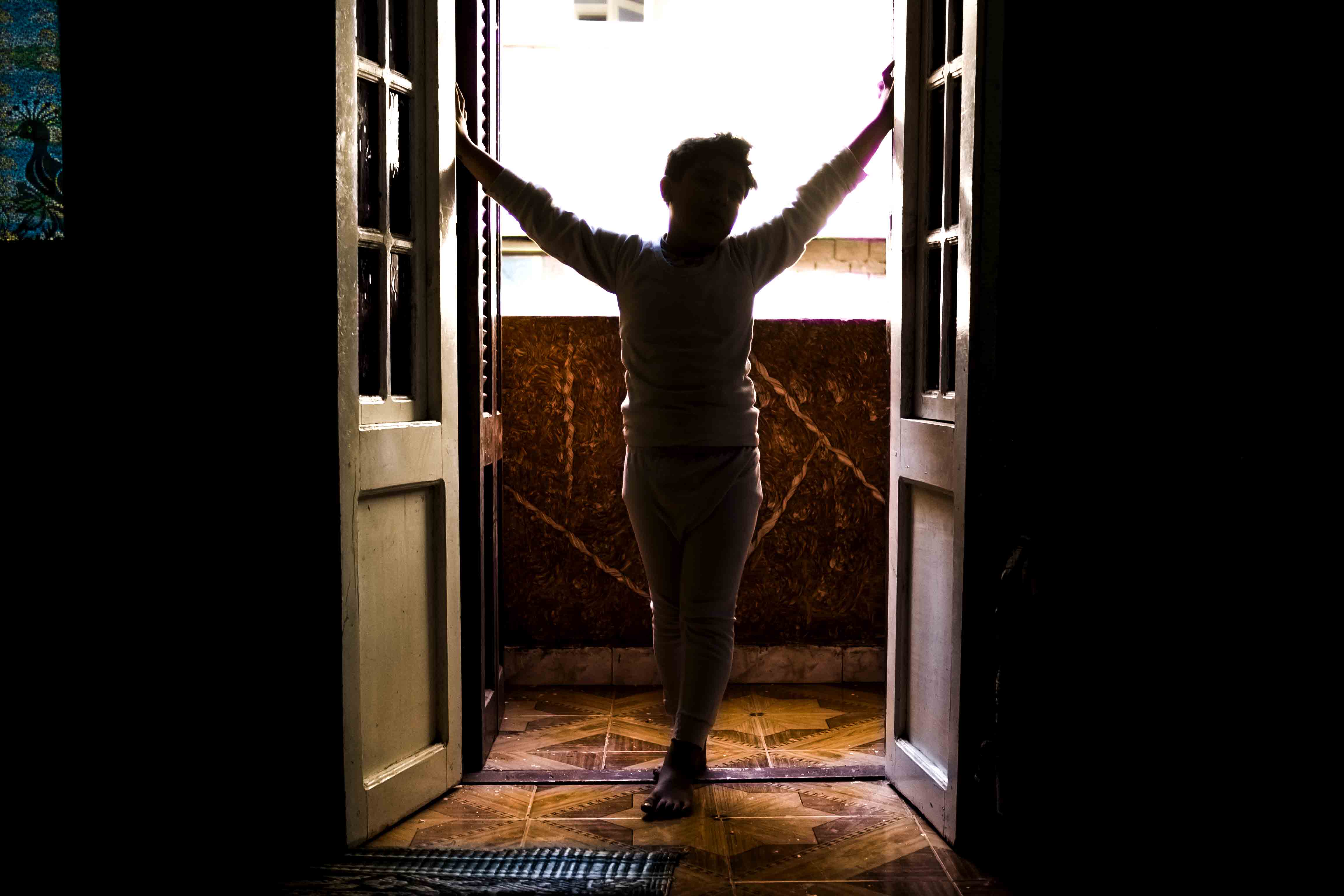 10-year-old Abanoub Samaan Nazmy stands on the balcony at his home in Manshiet Nasr on February 8, 2015. He lost his father to a suspected military sniper during a protest in March 2011 over the burning of a church. 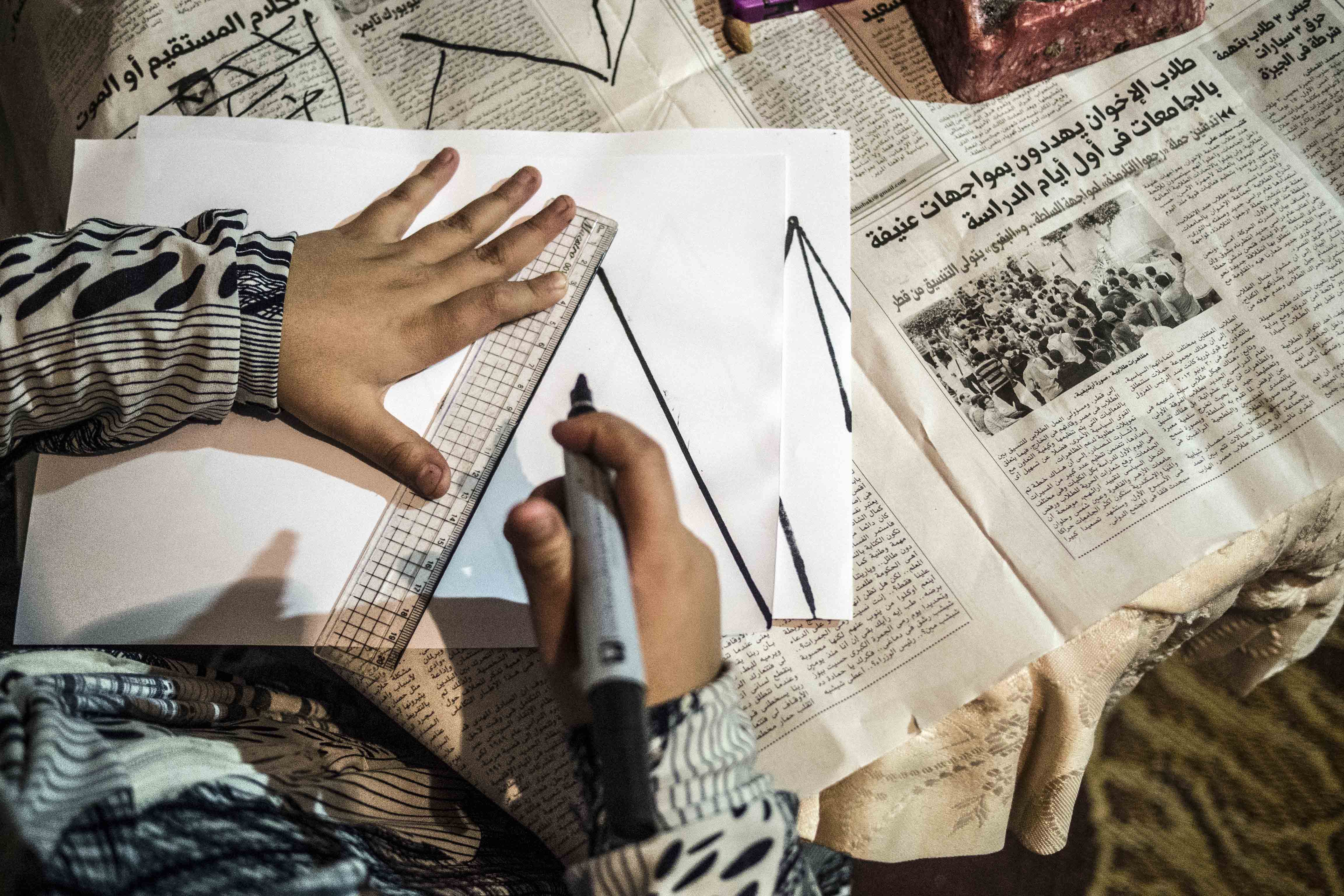 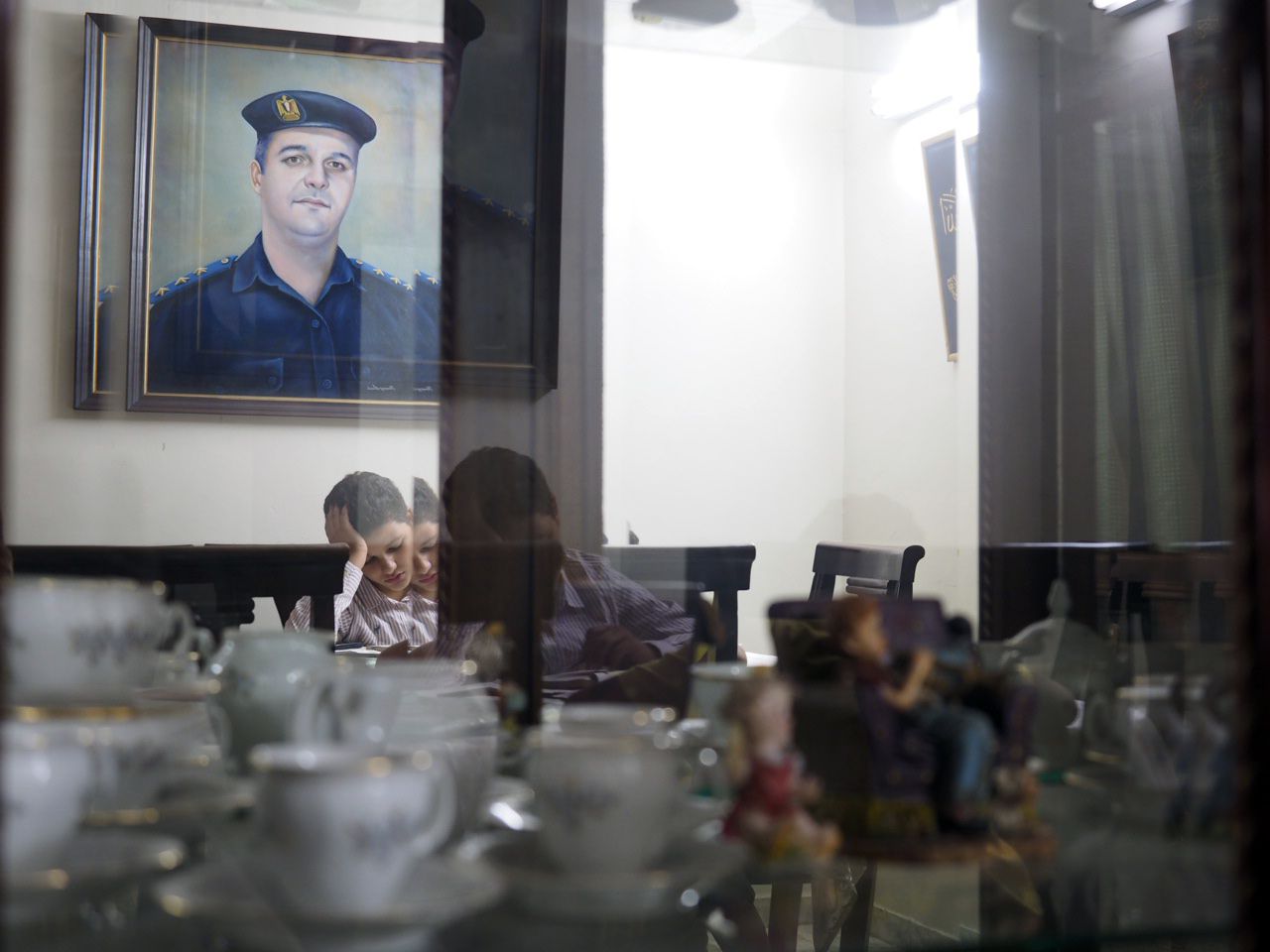 Thirteen-year-old Adham Ehab Anwar studies in the living room at his family house in 6 October City. His father, a policeman, was shot to death in an attack on his station after the bloody dispersals of two Islamist sit-ins in Cairo in August 2013. He wants to join the military to develop anti-terrorism devices. 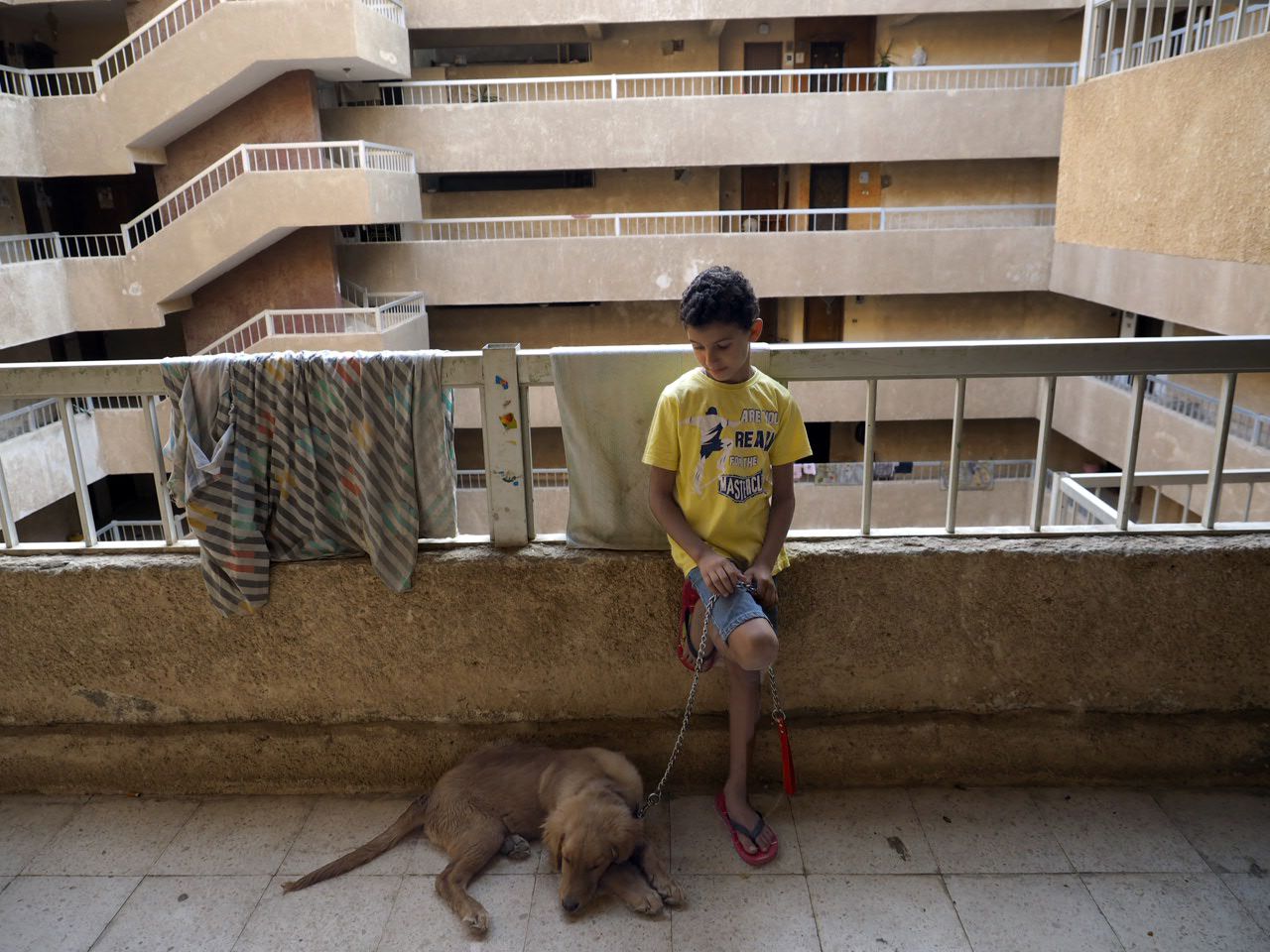 Anas Ehab Anwar waits for his brother with his dog Paplo in 6 October City on October 17, 2014. His father, police officer Ehab Anwar, was shot dead in Kerdasa, Giza. 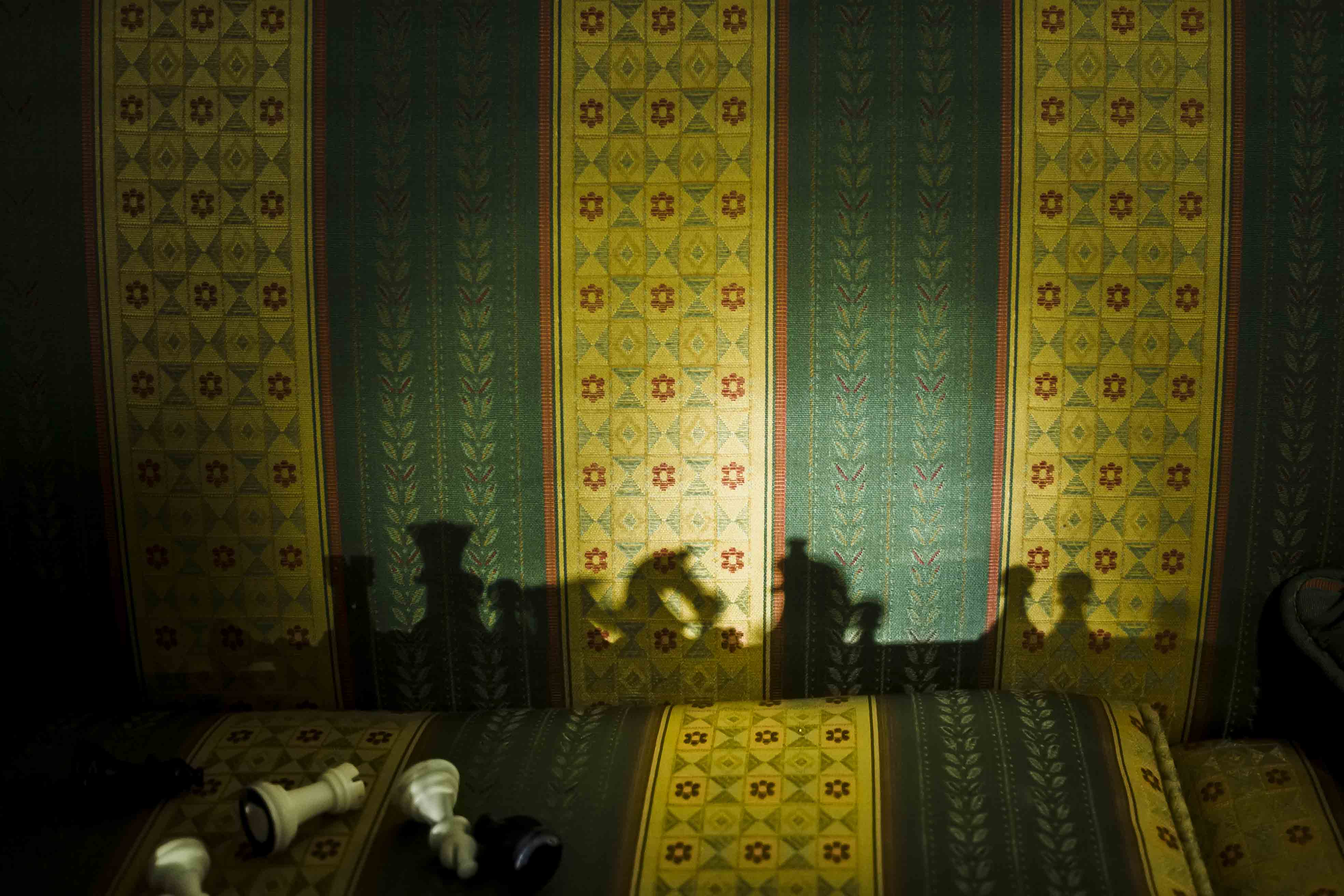 Adham and Anas Ehab Anwar (not photographed) play chess together on January 30, 2015, as they grieve their fatherÕs death. 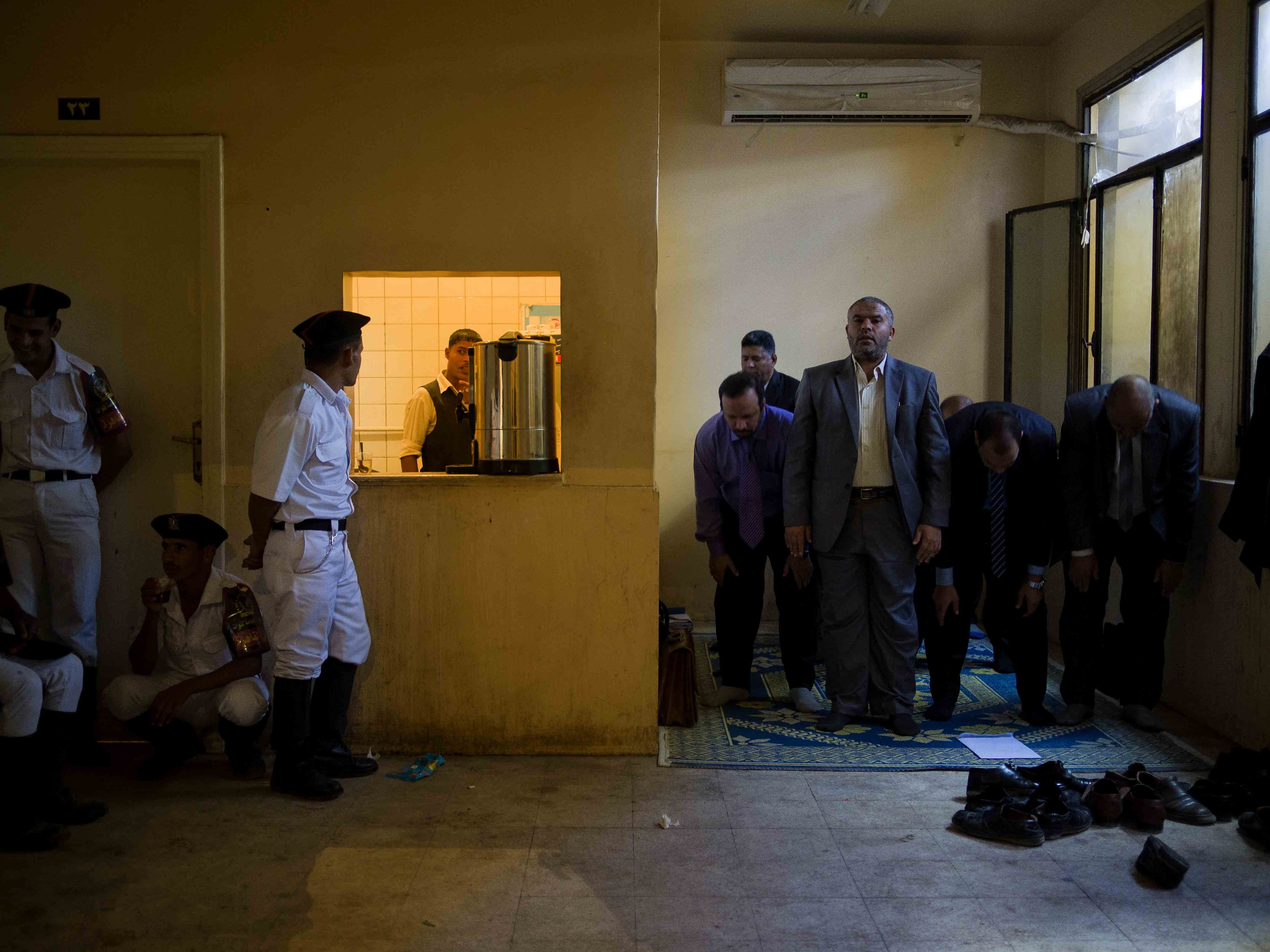 Muslim Brotherhood lawyers attend Al-Zuhr prayers, while police take a tea break during a trial at the Police Institute in South Cairo on November 3, 2014, in which 188 defendants were charged with breaking into Kerdasa Police Station armed with automatic guns, and the killing of 12 policemen, including five high-ranking police officers. 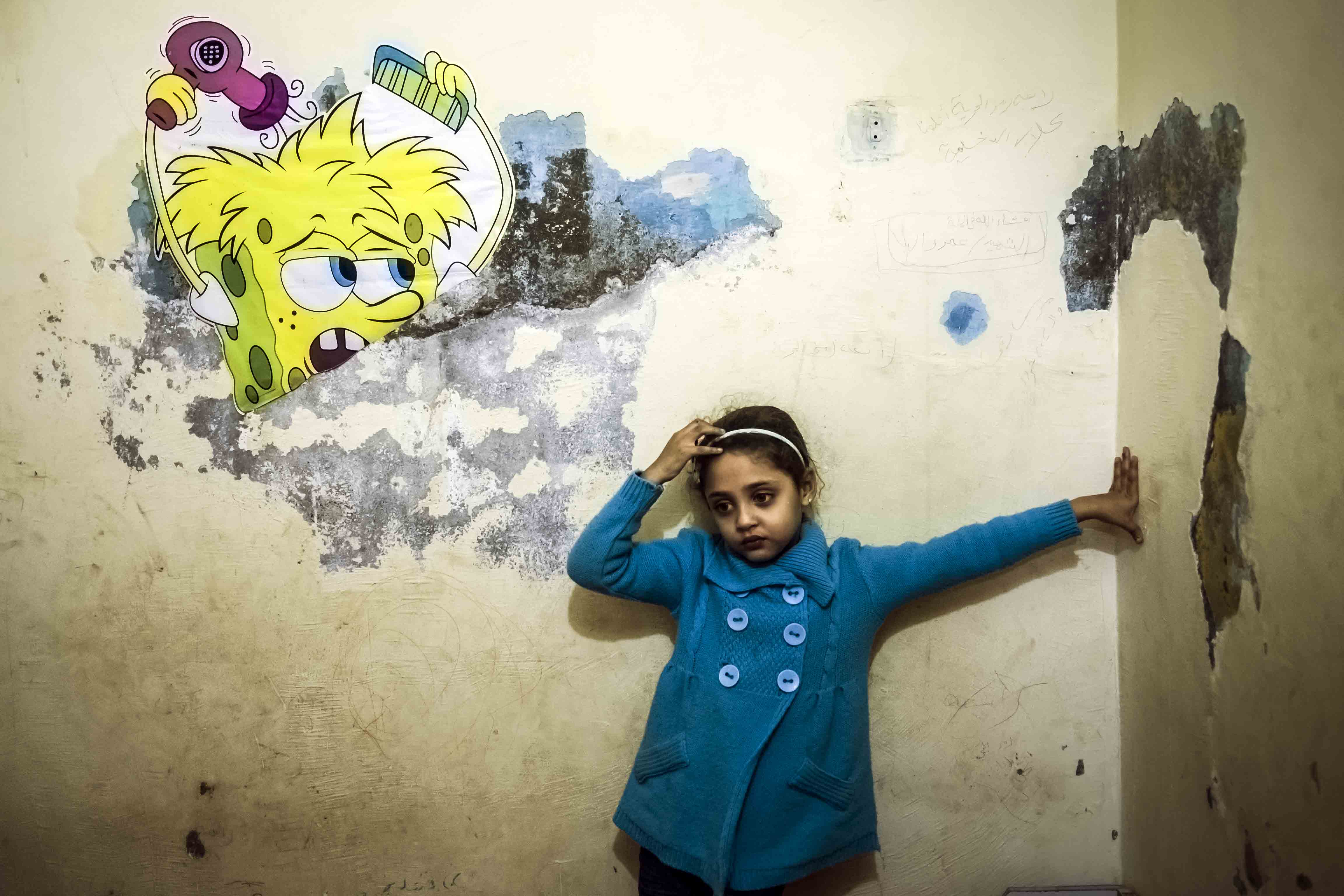 Five-year-old Jana Amr al-Banna stands in her bedroom at home in Badrashin, South Giza, on February 7, 2015. Her father, who supported the Muslim Brotherhood, was shot to death protesting in 2014. 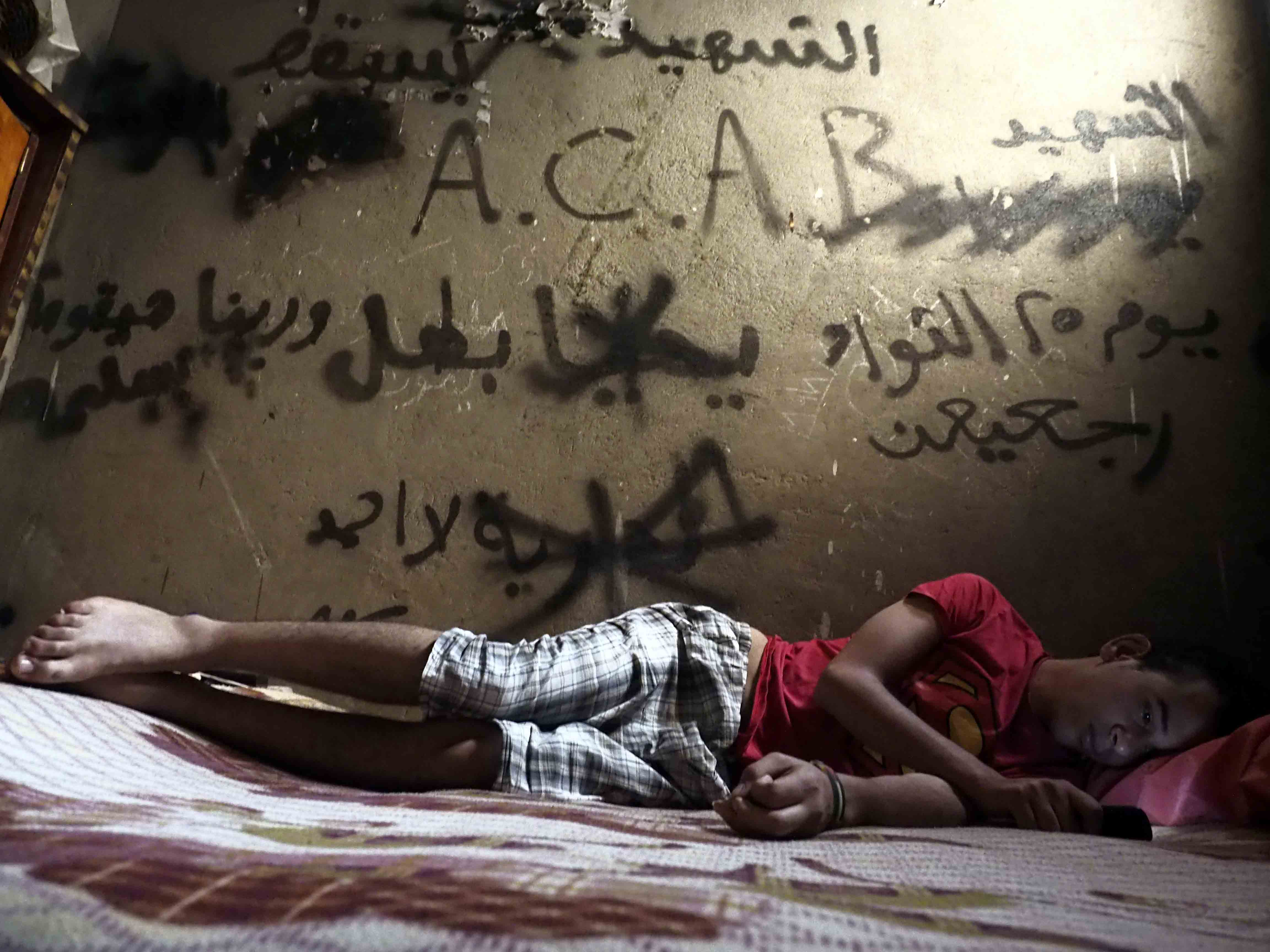 Law student and activist Tarek Tito wakes up in his room in Abu Zabaal district in Qalyubia. He was accused of belonging to a banned organization (the Muslim Brotherhood) and burning down the Muslim Brotherhood headquarters. His younger brother Mahmoud Mohamed was detained for more than 200 days for wearing a T-shirt with the slogan, "A homeland without torturing". 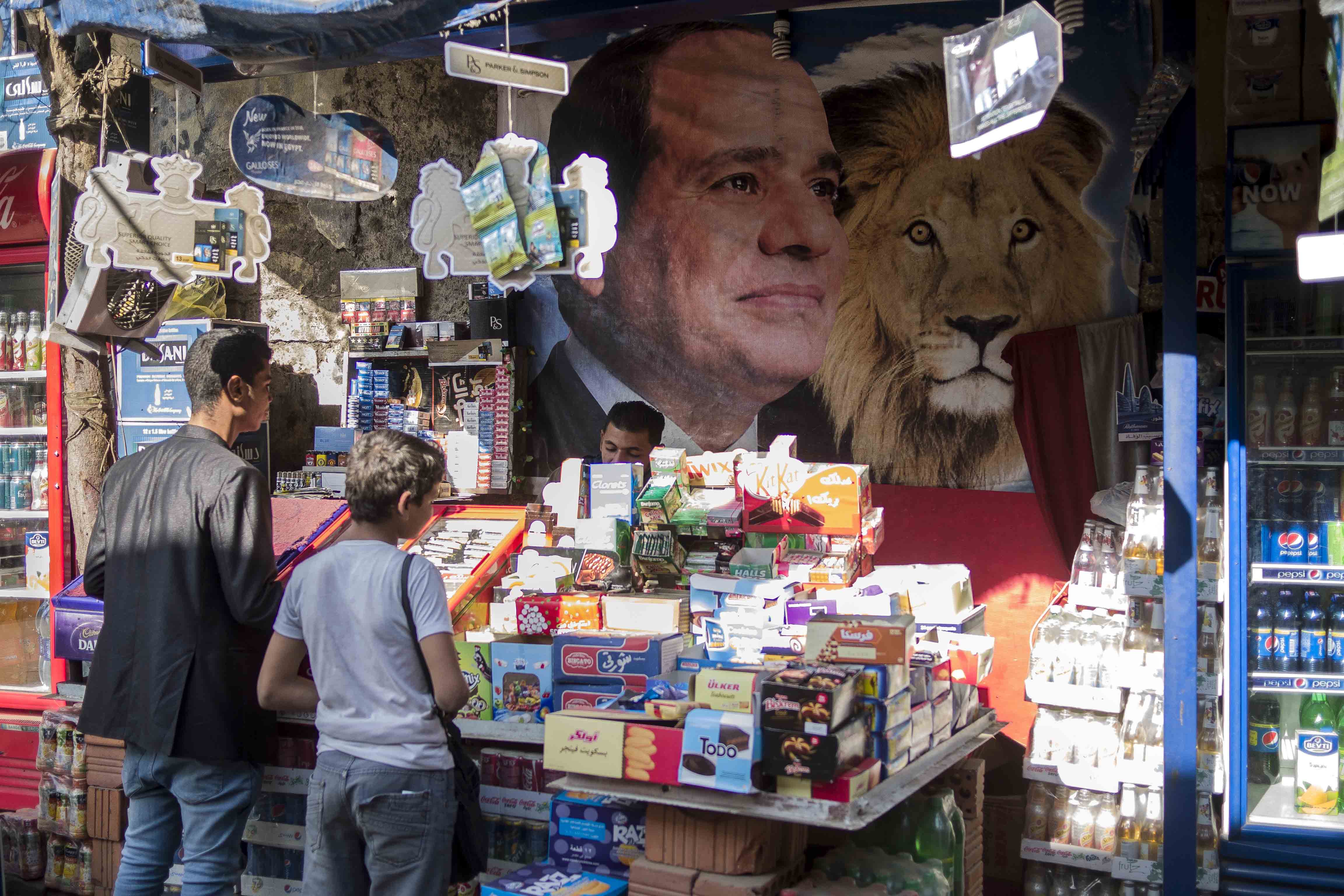 An unauthorized kiosk hangs a Sisi poster in Old Cairo. 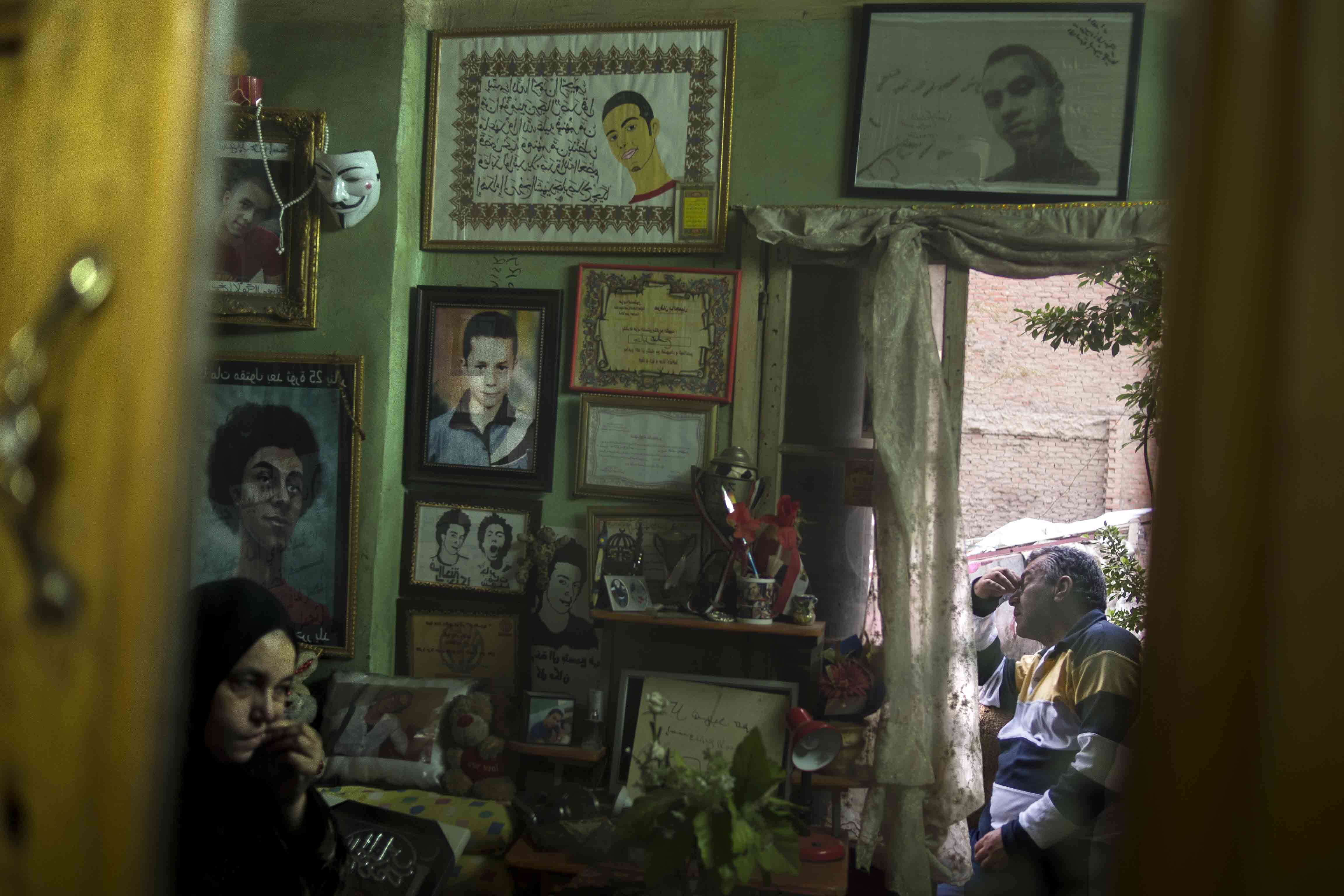 Salah and his wife Fatma in their son Gika’s room in Abdeen, downtown Cairo. Gaber Salah, a teenaged activist known by the nickname “Gika,” was shot dead by security forces in November 2012 on the first anniversary of the Mohamed Mahmoud street clashes. Thousands of people marched across Cairo for his funeral and his face became widely known and reproduced as graffiti on walls and t-shirts. 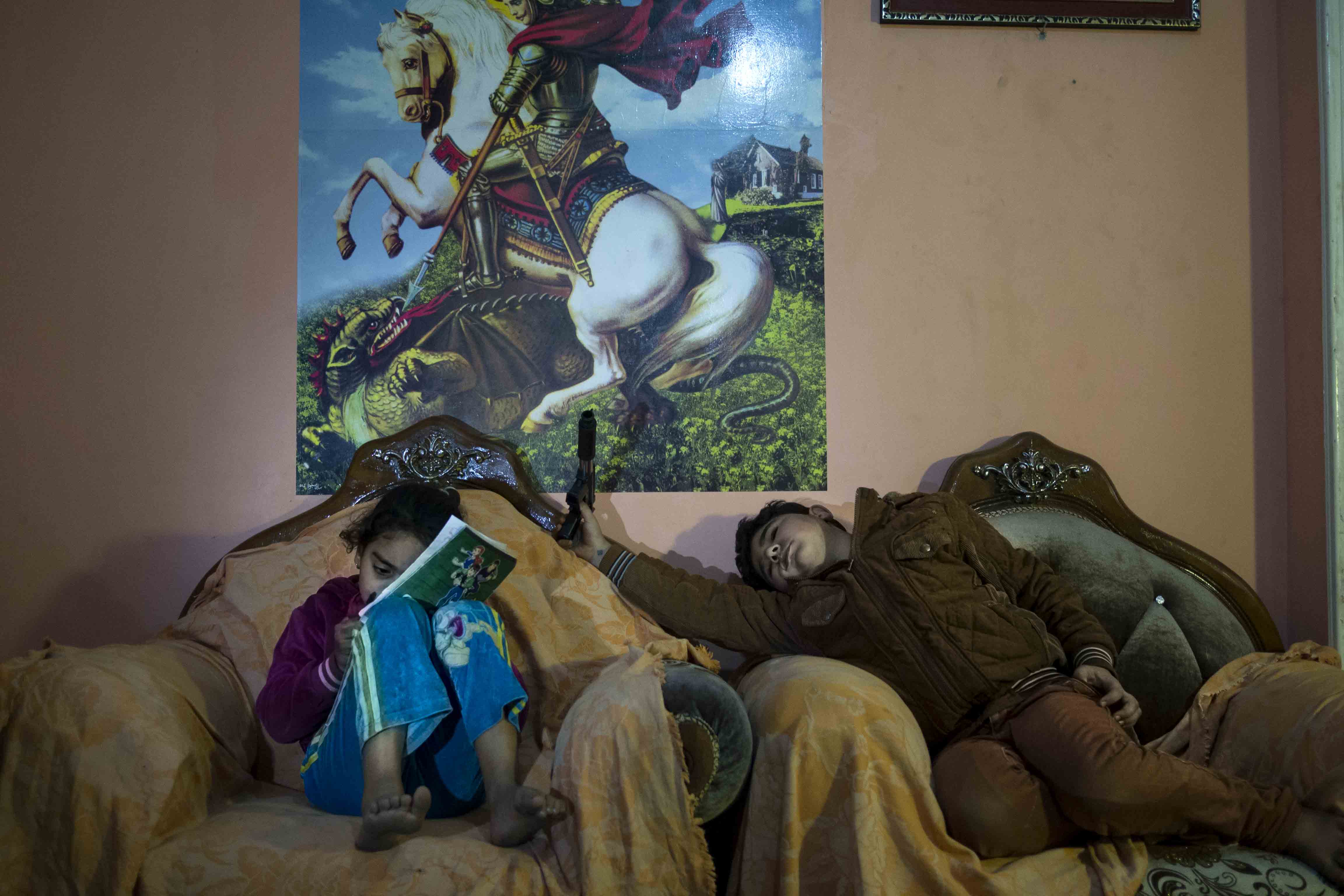 Ten-year-old Abanoub Samaan Nazmy, right, holds a toy gun as he plays with his sister, who is studying in the living room of their home in Manshiyet Nasr on February 2, 2015. Abanoub lost his Coptic father to suspected military snipers as he protested in March 2011 over the burning of a church. The years of turmoil following EgyptÕs 2011 uprising have seen revolutionary graffiti come and go, but hidden scars remain for children who grew up witnessing violence and experiencing loss.
اقرأها بالعربية
AD
Hamada Elrasam  https://twitter.com/elrasam
Hamada is always ready to take up any challenge in a work place or any other environment. His journey as a photographer started almost a decade ago and was honed at CIC photo-school. “I believe in ‘idea’ and the ‘story’ behind my photograph. I would say I am a photographer driven by art, creativity and inspiration, the ‘idea’ that goes into the making of photograph is what’s important.
4 articles on Mada
More from Panorama
Coronavirus
The silent nights of curfew
Ravy Shaker
See All Photo Stories