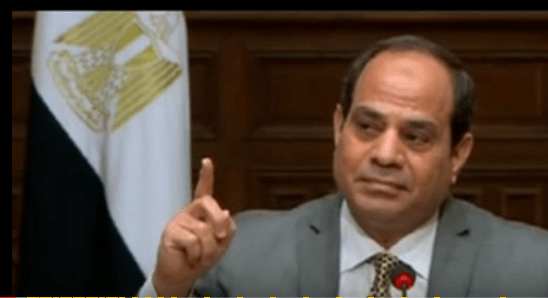 With Egypt embroiled in a series of international diplomatic conflicts, President Abdel Fattah al-Sisi gave a nationally televised address on Thursday, denying the purported link between Saudi Aramco’s decision to halt the supply of petroproducts and the country’s vote to support Russia’s initiative on Syria at the UN Security Council.

“I want to say to our brethren in the Gulf, and I want to remind people that nobody can interfere in the cordial and historic relations that we share,” Sisi said.

Speaking to an auditorium of assembled uniformed military personnel, police officers and politicians, Egypt’s president also decried claims that his government had intervened in Ethiopia’s domestic sovereignty, stating that the spate of negative news coverage is an indication that there needs to be more control of domestic media outlets.

On October 8, the Egyptian state voted in favor of two draft resolutions presented to the United Nations Security Council concerning the Syrian armed conflict. While the resolutions shared much of the same language, the French resolution called for an immediate suspension of the aerial bombardment of Aleppo, a clause absent from the Russian resolution.

However, Sisi downplayed the contradiction and speculation that its vote came due to allegiance to Russia – who increasingly is a military and economic ally – claiming that Egypt’s stance on Syria has been uniform and consistent and is part of a wider foreign policy framework that prioritizes the security of the Arab world.

“Are they contradictory votes?” Sisi asked. “No. Why? Because in one resolution there is a provision which calls for a ceasefire, and in one there is a call to allow the entry of goods to civilians who are suffering.”

The Egyptian president said the vote aligns with the country’s moderate and balanced foreign policy, which he said is subtended by an independent decision making, non-violence and non-intervention. These claims directly contrast with Egypt’s deployment of forces to Yemen to fight along with the Saudi-Arabian led coalition and military intervention into Libya.

“Some people believe that the suspension of petroleum shipments to Egypt is a reaction to this vote. I tell you no. Keep in mind that the shipment is part of a commercial deal that was signed in April, during Highness King Salman’s visit to Egypt,” Sisi said, referring to a five-year, US$23-billion agreement under which Saudi Aramco agreed to provide the Egyptian General Petroleum Company with 700,000 tons of refined petroproducts per month.

“We don’t know what the condition of Saudi Armco is. We took the necessary measures. We don’t have a problem with petroleum,” Sisi said.

The diplomatic conflict with Saudi Arabia was only one of the regional issues Sisi addressed on Thursday, also turning his attention to Ethiopia, with whom Egypt has had a contentious relationship over the country’s development plans which include the construction of the Grand Renaissance Ethiopian dam.

“Egypt does not conspire against other states,” Sisi said, explicitly stating that Egypt does not support opposition forces in Ethiopia as part of a plan to destabilize the country.

“My stance is clear. I said that I respect the well-being of others and the well-being of Egypt,” Sisi said, acknowledging Ethiopia’s right to development and use of Nile River water, while emphasizing Egypt’s “historical right to Nile water.”

Sisi pegged much of the recent negative attention on the media, insinuating that there is a conspiracy to undermine the Egyptian state.

“I tell you all, and the media should also take note of these points, because you must understand that people read about us through our media,” he said.

The Egyptian president has repeatedly called for Egypt’s media to align itself with the state’s official discourse. The Cabinet is currently reviewing cybercrime legislation that would criminalize the hacking official emails and publishing “illegitimate ideas” online.

“Following social networking sites and from the reports I’ve been sent, I can see that foreign media reports have not been comforting or reassuring,” Sisi said, adding that conspiracies are spread via rumors, and via social networking sites. “I’ve told you several times to be aware, because you don’t see the other side of who’s talking. What is happening is an attempt to sabotage Egypt, to isolate it, to pressure it.”

Sisi concluded his speech by dismissing rumors that Egyptian security forces killed Italian researcher and Cambridge doctoral candidate Giulio Regeni, calling it a baseless attempt to harm Egypt’s relations with the southern European country. He likened Regeni’s death to the downing of the Russian commercial jet over the Sinai Peninsula in October 2015, in which he described as an attempt to to harm Russian-Egyptian relations.