اقرأها بالعربية
Giulio Regeni: From a small village to a world cause 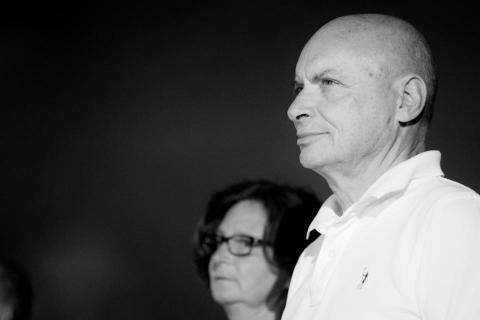 It is almost dawn in the early days of spring in Fiumicello. The small village in northwest Italy is dressed in yellow banners, reading, “Verita Per Giulio Regeni” (Truth for Giulio Regeni).

The cloth banners are hung on doorsteps and strung up between street lamps, moving gently in the breeze, but voicing the resolve of a village entirely taken up by finding the truth behind the murder of one of its young men.

Giulio came to Cairo in 2015 as a student and left in a body bag in February 2016. His body was found on the outskirts of the city, after he was reported missing on January 25, bearing traces of brutal torture.

“We know how he was killed, but now we need to know why.”

A few months on, his gravesite is filled with flowers and love letters. A copy of Nazim Hikmet’s Poesies d’Amour can be seen amid an avalanche of roses and pictures. He was an avid reader of world literature.

“He took interest in stepping out of the confines of his country,” his father Claudio says, eight months after Giulio’s death at the Internazionale Festival in Ferarra, during a ceremony where Mada Masr’s Hossam Bahgat is being awarded the Anna Politkovskaja prize for journalism. “He started traveling when he was 17. He was interested to discover different cultures.”

Next to Giulio’s native village, in another village called Duino, is the United World College, a high school program that gathers students from all over the world, including the author of this piece, who could have met Giulio, in another life, in another world. Here too, the yellow signs are spread on the school building and people’s homes.

As a child, Giulio used to hang out here, surrounded by the Adriatic Sea, the mountains, and students from all over the world; overhearing conversations about international peace and understanding. Students from the collage were among those to mourn his death earlier this year. When his time came for high school, he decided to go to the United World College branch in Mexico. The students of the college were among his mourners, earlier this year.

“He had empathy and respect for others, and was always interested in having a conversation with those who are different,” Claudio continues.

“He studied Arabic,” Paola, his mother, tells the audience. “He wanted to do his interviews in Arabic. He was a man of the future.” He worked with his emotions, as much as he did with his cognitive skills, she adds.

Because of the inevitable politics surrounding Giulio’s death, the inter-country investigation, and the secrets about those who killed him, both Paola and Claudio chose to go public with their son’s case, letting go of their need to privately grieve.

“We know how he was killed, but now we need to know why,” Paola says, remembering the lies propagated by the media since Giulio’s death. “We needed someone to defend us,” she says, pointing in the direction of the family lawyer, Alessandra Ballerini, who is also on a panel at Ferrara.

Ballerini recounted the stories spun about Giulio and his murder: reason enough to believe there is an interest in obscuring the circumstances of his death. “Where Giulio’s body was found, on a motorway, is a place where people and cars never stop,” she says, adding, “Whoever threw his body there wanted it to be concealed.”

Giulio was called everything from a spy, to a drug addict, to someone with a colorful, perhaps gay lifestyle, in attempts to explain his murder, Ballerini says. There was the story of his being a Muslim Brotherhood collaborator, because he spoke to members of the group in a post-June 30, 2013 context, where any association with the Muslim Brotherhood is viewed suspiciously. His research work on labor unions prompted speculation about him being a spy, Ballerini adds, and clean drug tests threw doubt on the dealer theory.

He was also called a “feisty man,” Ballerini says, after a witness said in March that he saw Giulio quarreling with another man in front of the Italian embassy in January, shortly before his disappearance. Egyptian investigators immediately discounted this account.

In March, Egyptian authorities announced they had uncovered the truth behind Giulio’s death, after security forces killed five people in a raid, accusing them of killing him. “Giulio’s papers were found on a silver platter next to the killed members,” Ballerini says dismissively. Egyptian authorities dropped the story after Italian investigators dismissed it.

Italian and Egyptian investigators met in Rome in April and September, and the family is awaiting analysis of footage reportedly showing where Giulio was last seen, which can only be deciphered by a German company, Ballerini says.

Giulio’s family has been battling misinformation and pushing for the truth for eight months, a task that hasn’t been easy amid delays in receiving requested documentation from Egyptian investigators, like phone records of users in the area where Giulio lived, and the varied responses from Italian authorities.

President of the Senate’s Human Rights Commission, Luigi Manconi, also sits on the Internazionale Festival panel. Manconi has been outspoken in calling for Italian pressure on Egypt to conduct a full and transparent investigation, such as halting Italian tourism in Egypt. “Thirteen percent of [Egypt’s] local GDP depends on tourism. This is a peaceful and democratic measure that can be taken,” he says.

“But why do we continue [bilateral] relations almost indifferently?” he asks, critical of the low value placed on human rights, amid international cooperation between states. Manconi calls for a campaign against torture, recalling the words of Paola and Claudio on seeing the dead body of their son in Egypt: “Giulio’s face has become so small, but we saw from the tip of his nose all the evil of the world.”

“Giulio’s case is a global case, a symbol of the violence of the Egyptian regime and the compliance of Western regimes.”

“There is pressure, not only from the energy sector, but also from the tourism industry, former diplomats, businessmen and of course the right-wing parties,” veteran author and analyst of Arab affairs Paola Caridi says. The Italian Senate voted in favor of suspending the export of spare parts of F-16 jet fighters to Egypt in June, in a resolution named after Giulio, intending to send a message to Egyptian authorities. But there is also a strong interest in maintaining bilateral relations, particularly concerning a number of key economic deals. For example, Italian energy company ENI is currently working on the discovery of a supergiant gas field off the Egyptian coast.

Italian ambassador to Egypt, Maurizio Massari, was recalled over the summer. Massari, was known for his heavy engagement with Giulio’s case, and was later appointed to the post of Italy’s permanent representative to the European Union in Brussels. It was in Brussels that the European Parliament passed a resolutionin March condemning torture in Egypt.

New ambassador to Egypt, Gianpaolo Cantini, was appointed in May, but continues to be non-resident. Cantini used to run the Italian Cooperation Agency and “is very knowledgeable about the region,” according to Caridi, who says Prime Minister Matteo Renzi is keen on getting support ahead of the upcoming referendum on constitutional amendments, due to take place in a few weeks. Even though the Italian Parliament doesn’t have much influence, Caridi says, public opinion over Giulio’s murder is important. “You find the yellow banners with the truth for Giulio Regeni slogan all over Italy,” she says.

Giulio’s death has prompted global responses. Professor of Arabic Studies at the University of Sydney, Lucia Sorbera, is one of many Italians who are actively campaigning for the truth in Giulio’s case, both at home and abroad. “Giulio’s case is a global case, a symbol of the violence of the Egyptian regime and the compliance of Western regimes,” she says. “Our big companies and our governments can make a difference. We should put pressure on them.”

Sorbera highlights a long tradition of contemporary activism for social justice in Italy, marked in particular by the World Social Forums since the 2000s. She says this explains why Giulio’s death has captured the attention of so many people.

AD
You Might Have Missed
Where do old lesbians go to die?
Mugamma revisited: Reimagining the building and the square
Carbon Colonies & A Green New Deal
What we talk about when we talk about trees
AD
Lina Attalah
67 articles on Mada