Over the past few weeks clashes over Libya’s oil ports have broken out between forces linked to the UN-backed government in the West and the Libyan National Army (LNA), one of largest militant factions in the east.

Oil is Libya’s most important natural resource and exported commodity, but oil production and exports have suffered in the protracted fighting that has engulfed the country. Prior to 2011, crude oil reserves represented 95 percent of Libya’s export revenue, according to Bloomberg. However, Libyan oil production has fallen to less than half of its pre-2011 level.

On Saturday the PNG briefly took back two of the oil ports, before being forced out again on Sunday by Haftar’s forces. Haftar and the LNA represent one of the largest factions in eastern Libya, while the PNG are linked to the UN-backed Government of National Accord (GNA) based in Tripoli.

Many believed that the clashes would delay any possible resumption in Libyan oil exports, which have been stalled since December 2014.

But on Wednesday the National Oil Corporation (NOC) announced that an oil tanker successfully had disembarked from the Ras Lanuf port to make its way to Italy, a move that may undermine the GNA.

To sort through this Mada Masr has put together a who’s who of the major players in Libya, detailing how they relate to Egypt and what role they play in the most recent clashes. 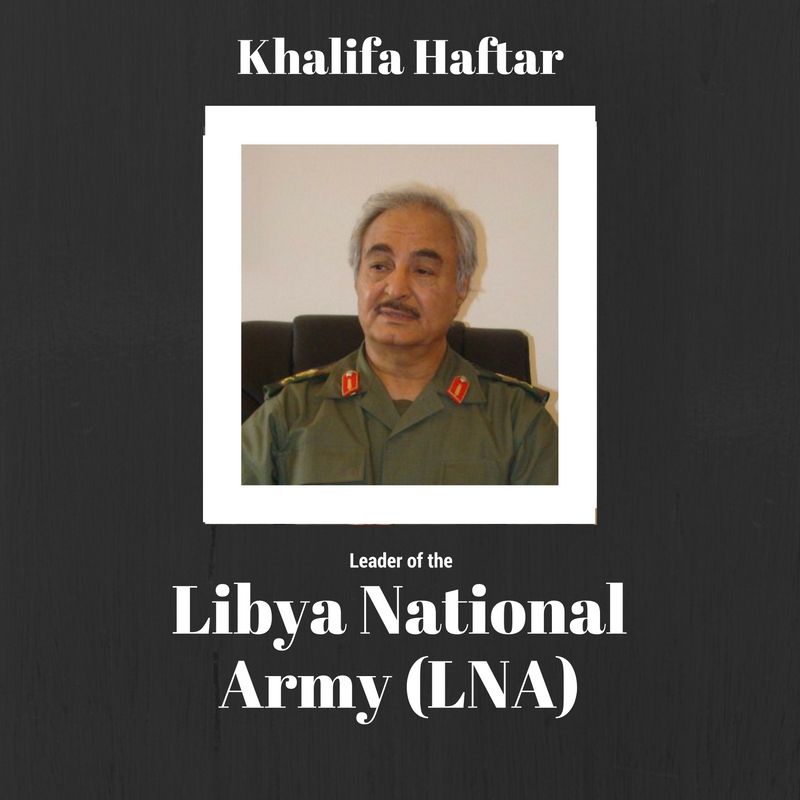 Khalifa Haftar is the leader of the Libyan National Army (LNA), which is an eastern Libyan faction and one of the largest armed forces in the country.

Haftar is backed by Egypt and the United Arab Emirates. He has been lauded in Egyptian media for fighting terrorism and promoting cooperation between Egypt and Libya.

Haftar opposes the UN-backed Presidential Council based in Tripoli, which was formed under the terms of the UN-brokered Libyan Political Agreement, a December 2015 peace deal between several rival factions. The deal also led to the formation of the Government of National Accord (GNA), whose members are picked by the Presidential Council.

Haftar has refused to recognize the GNA and the Presidential Council since the deal was finalized. Haftar is reportedly unhappy that he was not allocated control of defense operations and is suspicious of the GNA’s links to Misrata militias, some of whom have Islamist links.

A former Muammar Qadhafi-era general who was forced into exile during the former ruler’s reign due to military losses, Haftar returned to Libya during the 2011 revolution and formed a makeshift rebel force. He was appointed commander of the Libyan National Army (LNA) by Libya’s elected parliament, the House of Representatives (HoR), in 2015.

Haftar is still linked to the HoR in Tobruk, where he has many allies. The parliamentary body was to vote on the Libyan Political Agreement in January, but has yet to do so. Many have blamed Haftar’s allies for the inaction, accusing them of stalling the process.

The LNA leader’s recent actions have only served to further throw the strength of the peace deal into doubt, as he seized key oil ports — Zueitina, Brega, Ras Lanuf and Sidrah — from forces linked to the GNA in mid-September. The ports are located in the oil rich east-coast area known locally as the “Oil Crescent.”

The move has been interpreted not only as a seizure of key oil ports, but as a strategic response to the GNA’s growing power. Analysts state that Haftar is attempting to assert the power of the LNA and gain leverage over the GNA using control over strategic oil ports.

The success of the operation led HoR speaker and supreme commander of the armed forces Agilah Saleh to promote Haftar from lieutenant-general to field marshal.

Shortly after seizing the oil ports, Haftar announced that he had reached a deal with Libya’s National Oil Corporation (NOC) to begin exporting crude oil from the countries terminals. The first shipment of crude oil was announced to have successfully departed from Libya’s coast on Wednesday, despite the LNA’s continued struggle with the PNG to control oil ports.

The Government of National Accord 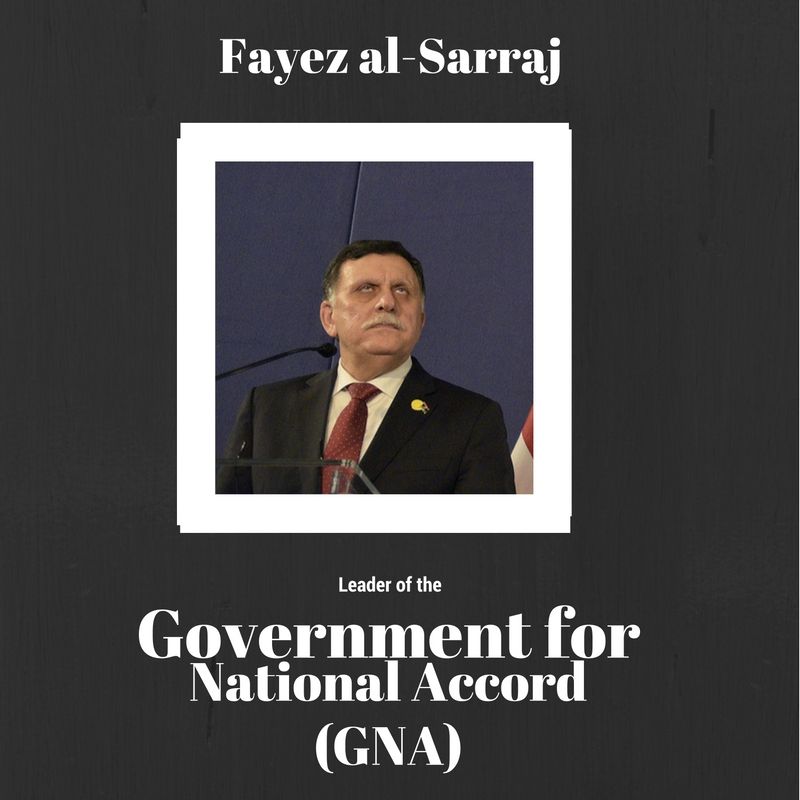 The Government of National Accord (GNA) is currently led by Fayez al-Sarraj, a former parliamentarian who was living in exile in Tunis before the GNA was formed.

He and a cabinet of ministers sailed into Tripoli in late March, despite opposition from militias on the ground in the city. Since then, the GNA has been based in Tripoli and has allied with the Misrata brigades, who have provided Sarraj and his cohorts protection.

In August, the GNA, backed by Misrata militias and US airstrikes, launched an offensive against the Islamic State in Sirte. By late August, Libyan authorities announced that the campaign had been successful and that they had almost entirely regained control of the city.

This move may have threatened Haftar, who has always presented himself as the prime opponent to IS and Islamist militant groups.

Ziad Akl, a senior researcher at the Center for Political and Strategic Studies, previously told Mada Masr that Haftar’s seizure of the oil ports was a strategic response to the GNA’s gains against IS. Akl explained that Haftar was attempting to reassert the LNAs power in Libya.

The GNA remains the internationally recognized government with support from the UN, the United States, France, Germany, Italy, Spain and the United Kingdom.

Egypt’s position on the GNA is murkier, as it must balance its support for Haftar with its stated support of the internationally recognized government. The Egyptian government’s support of Haftar is partially due to its belief that he can provide border security and will target Islamist elements within Libya. 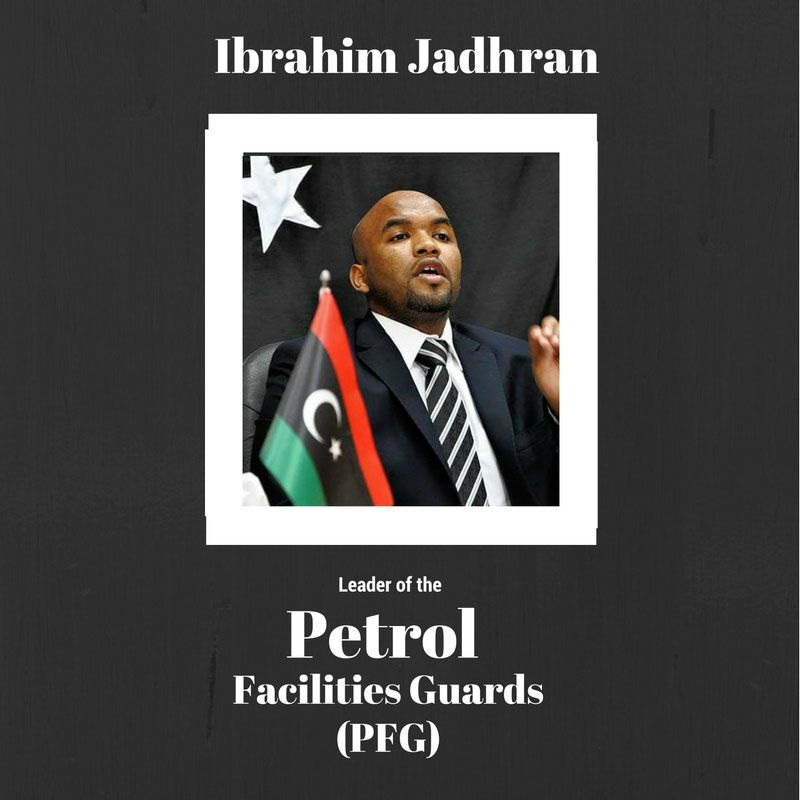 Ibrahim Jadhran is the leader of the Petrol Facilities Guards (PFG), a relatively independent faction that has controlled key oil ports in Libya for years.

In recent months, the GNA pursued and finally finalized a deal with the PFG to regain control of oil ports and begin exporting crude oil, with one of the deal’s entailments having the GNA paying the salaries of PFG forces. The move was highly criticized for providing militants with an opportunity to extort the government.

The GNA-PFG deal plotted a course in which oil production facilities would be repaired and the first oil tanker would depart from Libya’s shore on September 18.

However, the plan laid out in the deal was disrupted when Haftar seized the four oil ports from Jadhran’s PFG on September 13. The international community condemned the LNA maneuver and called on all forces to not damage oil facilities and to respect the UN-backed GNA.

In the interim, Haftar was making moves to start exporting crude oil, but clashes between the LNA and PFG have thrown the future of Libyan oil exports into doubt.

Jadhran attempted to retake Es Sider and Ras Lanuf earlier this week but was beat back after the PFF came up against Haftar’s forces.

Following the attacks, the NOC reported that an Es Sider oil storage tank had been set ablaze in the fighting. However, the fire was successfully extinguished, and there was no damage to any other oil facilities.

Jadhran and Haftar have a long-standing rivalry. In early 2016, Jadhran distanced himself from the LNA and slammed Haftar, saying that he and IS were “two sides of the same coin.”

While petroleum guards have played an important role in Libya over the past few years, they have been damaged by Haftar’s port seizure. In the meantime, Haftar remains in control and oil is being exported.

Whether the GNA will make another attempt to take control of the ports or figure out a way to negotiate with Haftar remains to be seen.

AD
You Might Have Missed
Carbon Colonies & A Green New Deal
Mugamma revisited: Reimagining the building and the square
What we talk about when we talk about trees
Where do old lesbians go to die?
AD
Pesha Magid
65 articles on Mada