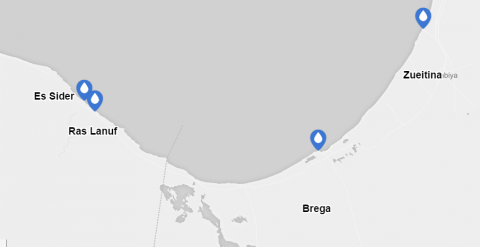 Leader of the Libyan National Army Khalifa Haftar took control of four major oil ports from the UN-backed Government of National Accord on Sunday, Reuters reported.

The seizure of the ports follows a peace deal between several rival factions, brokered by the United Nations in December. The deal led to the formation of the Tripoli-based Government of National Accord (GNA) and a nine-member Presidential Council, but was not recognized by several major armed groups, including the Libyan National Army (LNA).

Control over oil has ignited conflict between various factions in Libya since former ruler Muammar Qadhafi’s ouster in 2011. Prior to 2011, crude oil reserves were the source of 95 percent of Libya’s export revenue, Bloomberg reported. Libyan oil production is now less than half of what it was pre-2011.

Haftar took the cities from Ibrahim Jadhran, the leader of the Petroleum Facility Guards (PFG), who the GNA was paying to reopen key oil ports. The GNA’s decision to provide salaries to PFG members was heavily criticized at the time for providing opportunities for militants to extort the government.

The GNA-PFG deal nevertheless allowed for repairs to oil production facilities and Libya was due to ship its first crude oil cargo since December 2014 on September 18.

Haftar does not recognize the GNA’s authority and has opposed it since the December deal. He is linked to forces in eastern Libya and controls territory in the east, including some oil facilities and Benghazi.

Egypt’s interests are split between concerns over weapons and terrorism, particularly concerning its western border with Libya and the growing influence of the Islamic State. So, while its policy has been to support the internationally recognized Presidential Council, it also pushed for the lifting of an arms embargo on Haftar and his forces, whom it considers to be key in confronting the Islamic State on the ground.

Ziad Akl, a senior researcher at the Center for Political and Strategic Studies, told Mada Masr Haftar’s seizing of the ports is a strategic move to gain leverage over the GNA. While Haftar cannot expect to export oil, he is trying to assert the LNA’s power, he explained, adding, “In the past few weeks there was an orchestrated operation targeting Daesh [the Islamic State] in Sirte. This was done under the banner of the Presidential Council, which would give the Council a lot of power.”

In August, Libyan forces backed by US-airstrikes launched an offensive against Islamic State forces in Sirte. By late August, Libyan authorities said the campaign had been successful and that they had almost entirely regained control of the city.

Akl believes the seizure of the ports was a response to the Presidential Council’s attacks on the Islamic State, in order to show that the LNA is still a significant player in Libya.

“All of it boils down to control over domestic power. These are all manifestations of the same problem. We thought the agreement would end things, but things did not end, things became more fragmented,” Akl said.

Richard Mallinson, an analyst at Energy Aspects Ltd. in London, told Mada Masr that Haftar wants a senior position in the unity government, giving him control over the Armed Forces and executive powers. He also wants the GNA to distance itself from Islamist groups like Libyan Dawn and the Misratan Brigades, he added.

The GNA is unlikely to concede to Haftar’s demands, according to Mallinson. “Senior members of the Presidential Council believe his demands would fatally undermine the Libyan Political Agreement (LPA). Also, if they were to strike a deal with Haftar, then the factions that currently protect the Presidential Council in Tripoli might well withdraw this protection. So I expect the political situation to remain fragmented and potentially worsen in the coming months,” he explained.

The United Nations released a statement on September 12, addressing the fighting over the oil ports and calling for a peaceful resolution to the conflict. The UN representative for Libya, Martin Kobler, stated: “Attacks on the oil terminals further threaten the stability and lead to a greater division of the country. They restrict the oil exports and add to people’s suffering,” calling on all parties to respect the UN-backed GNA and Presidential Council.

The United States, France, Germany, Italy, Spain and the United Kingdom also released a joint statement on Monday expressing sentiments in line with those of the UN: condemning the attacks and calling on all forces not to damage oil facilities and to respect the GNA and the Presidential Council.

Mallinson told Mada Masr: “After establishing itself in Tripoli, the GNA needed to quickly win support from other parts of Libya to be able to fully implement the LPA. The vote against the LPA in the House of Representatives last month was a major setback and the seizure of the terminals may prove to be the last nail in the coffin.”