Just before 8pm last Monday Ahmed Medhat went to buy some snacks from the supermarket near his sister’s house in the east Cairo suburb of Nasr City. Less than 10 minutes passed before he was back upstairs in the apartment.

This was the last time Medhat was seen alive. The following day, his body showed up at the notorious Zeinhom Morgue.

Contention surrounds the death of the 21-year old medical student. His family say that he was arrested on Monday night and died shortly after in police custody. The Ministry of Interior offered its own account in a statement on its Facebook page four days after Medhat’s body was identified at the morgue, saying that Medhat was caught up in a police vice squad raid on a health club that functions as a brothel. According to this account, during the raid, Medhat and a woman jumped from the second floor to evade being caught by police and that the fall resulted in Medhat’s death, while the woman survived with several broken bones.

Family and friends categorically deny claims that Medhat was at a brothel when he died and say that the explanation from police, which was also repeated by the prosecution, is a shameful attempt to evade accountability for his death.

In a video and images showed to Mada Masr, there are multiple black burn marks that appear to be from cigarettes on Medhat’s body.

Following news of the student’s death, outrage quickly erupted on social media, with an image of Medhat, pictured next to Khaled Saeed and an empty box saying “who’s next?” 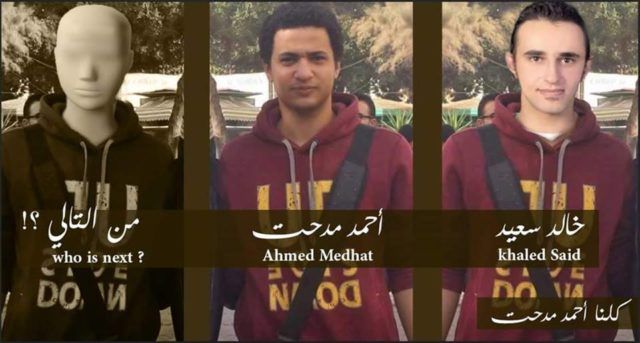 The case of Saeed, the young Alexandrian man beaten to death by the police, was a pivotal one in the months before the 2011 revolution and brought increased attention to police brutality. Police at the time claimed that he was selling narcotics.

Medhat had been staying with his older sister Maha since May after he was convicted in absentia in February on charges of participating in a protest and possessing weapons. The family found out by chance in April that Medhat had been convicted as lawyers they knew heard his name mentioned in court.

His legal troubles started in August 2015 when he was arrested from the family home by a group of masked police officers on suspicion of carrying illegal firearms and bomb-making materials and taking part in unauthorized protests. The police looked at his laptop and phone and found no evidence of any wrongdoing. Three other people were charged in the same case, a 38-year-old doctor, a 48-year-old engineer and a 13-year-old boy. Medhat’s father says his son had never met any of the co-defendants.

His father, Medhat Kamel, relates how in the summer of 2015 Medhat was kept at the first precinct Nasr City police station for eight days, and beaten, kicked and electrocuted for three of those days. Medhat told the police that they had the wrong person, that his father had worked for Hosni Mubarak’s government, building waste management facilities, and his engineering business now had contracts with the current government, that he was a student and that neither of them had ever taken part in political or anti-government activities.

Mada Masr spoke to several of Medhat’s classmates at Ain Shams University. Their accounts paint a portrait of a student who was polite and diligent, known for his high grades and with no interest in politics or protesting.

Released in light of the absence of physical evidence, Medhat was relieved to be free and thought that this would be the end of the case. He returned to his studies until the news of the verdict hit the family.

Family members say Medhat had no intention of serving a sentence for crimes he had not committed. Now going into his fifth year of medical school, he told the family he intended to specialize in neurosurgery, applying for scholarships to finish his medical degree abroad. He was accepted to complete training in Pennsylvania to gain a license to practice medicine in the US. In the meantime he stayed with his sister as a precaution, as he continued to try and find a legal solution to his predicament.

On the night Medhat went missing his sister Maha had gone to visit her parents’ home nearby in Nasr City. When she left, Medhat was studying for his TOEFL English equivalency exam, one of the requirements for him to complete his training in the US. He was had planned to meet a classmate, but decided to stay home and study.

When she arrived home at around 8.30pm to find no one there, she called to check on him but there was no answer. After trying to reach him for some time she called her brother, Mohamed, who also tried several times to get in touch with him.

With their parents already asleep the siblings began to panic, calling Medhat’s friends to see if anyone had heard from him. Shortly before midnight, his phone was off.

By Tuesday morning it had been hours since anyone had seen or heard from Medhat. When Kamel woke for morning prayers, he found Mohamed fully dressed and pacing around waiting for his parents to stir. He told his father that Medhat was missing.

Assuming that the police had arrested Medhat based on the outstanding warrant, the two drove to the first precinct Nasr City police station just after dawn. There, they were advised to look for Medhat at nearby hospitals and informed that several hours earlier two men had died by jumping from the roof of a building.

The officer then told them to come back after two hours when the morning shift rotation occurs. When his father returned to the station, the police officer at the front desk immediately knew the details of the outstanding warrant and told him that Medhat had been arrested and then jumped from the police van, fatally injuring his head as he hit the ground.

Kamel then went to the duty officer to ask about the whereabouts of his son’s body and was told that Medhat had been at a brothel when it was raided by police and that he had jumped from the building trying to escape. The officer informed him that Medhat’s body was now at Zeinhom Morgue.

In between muffled sobs, Kamel describes how when he heard Medhat’s body was at the morgue he knew that the police had killed his son.

After identifying Medhat’s body at the morgue, he went to file a complaint at the prosecution office in Abbasaiya alleging that Medhat had been killed while in police custody. There he met with the prosecutor charged with handing the papers for Medhat’s case, who told him that his son had been at a very bad venue, and on being caught in a compromising position he jumped from the building to evade police.

Kamel says he was then advised to get the burial permit and not to make any noise.

Refusing to back down, Kamel says he reiterated his belief that the police had killed Medhat, to which the prosecutor replied “You want to make this a political story and to make trouble after I stayed up all night preparing documents to close this case.”

Insistent that there be a proper investigation into Medhat’s death, the family’s lawyers sent a request to the general prosecutor’s office requesting the presence of an independent coroner during the autopsy. Professors from Ain Shams Medical School, where Medhat was a student, had volunteered to aid the forensic investigation at no cost to the state. The request was denied.

The following morning an autopsy was conducted in the absence of lawyers or an independent coroner, and the cause of death was stated as a fractured skull. A full autopsy report has yet to be released, according to the family’s lawyer, Ali Abdel Fattah, who explains that an investigation is due to be completed by the prosecution, but has yet to start.

Karim Ennarah, a criminal justice researcher at the Egyptian Initiative for Personal Rights, says the explanation provided by the police of the circumstances surrounding Medhat’s death fits a pattern.

“The police have a habit of giving bizarre explanations of how people died in custody, often in an attempt to dodge accountability for the individual officers involved in such cases,” he says.

Kamel notes the similarity to Saeed’s death, saying, “They made a big mistake killing my son, people are tired of this… They are already comparing Ahmed to Khaled Saeed, on social media — not just in Egypt but abroad, people are watching.”

The case of Italian student Giulio Regeni, whose charred remains were found on a desert road outside Cairo in January of this year, has brought renewed attention to police violence in Egypt.

Kamel says he will soon make plans to leave the country with his family.

“We are not secure in Egypt,” he says. “When the police arrest your son and kill him … What value is Egypt to me if my children are not secure?”

AD
You Might Have Missed
What we talk about when we talk about trees
Carbon Colonies & A Green New Deal
Mugamma revisited: Reimagining the building and the square
Where do old lesbians go to die?
AD
Maddison Sawle
6 articles on Mada