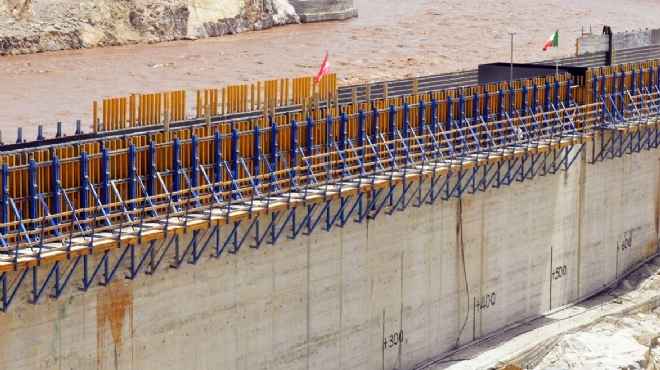 A meeting slated for Monday in which contracts would have been signed with a French consultancy regarding the Renaissance Dam was delayed by Ethiopia, an Egyptian government source told Mada Masr.

Contracts were due to be signed at today’s meeting with BRL, a French firm assigned to conduct studies about the implications of the dam on the Nile river stream. According to the source, Ethiopia called for a postponement citing “domestic disruptions.” No new date was set for the meeting.

In July Egypt accepted the idea of commissioning BRL to conduct the studies, marking a turning point in stalled negotiations.

Egyptian officials had previously refused to allow the French company to conduct technical studies alone, for fear the French company would issue findings in favor of Ethiopia as there have been previous dealings between the company and the Ethiopian government.

According to the source, Ethiopia regularly postpones meetings and engages in other similar tactics to delay any progress in the negotiations.

Egypt’s Ministry of Foreign Affairs had announced in August that Egypt received an invitation from Sudan to attend the signing of the contract with BRL on September 5 and 6. Ahmed Abu Zeid, the ministry spokesperson had said that the contracts were being prepared and would be signed without delay, privately owned Al-Masry Al-Youm reported.

In an interview with chief editors of national papers in August, President Abdel Fattah al-Sisi had also assured them that the Renaissance Dam negotiations were “going in a promising way.”

As a means to deal with contention over the implications of the building of the Ethiopian Renaissance Dam on Egypt’s water share, Ethiopia and Egypt had agreed to assign two consultancies to conduct technical research on the dam. The agreement was reached in 2015 after various rounds of negotiations between Egypt, Sudan and Ethiopia’s foreign affairs and water resources’ ministries and ended up as part of the Khartoum Document.

Throughout these negotiations, Egypt had insisted that BRL not be contracted to undertake the studies alone as it had reservations that already existing relationship between Ethiopia and BRL would lead to findings favorable to Ethiopia. A Dutch consultancy had withdrawn from the mission last year.

According to the Khartoum Document, the French Artelia company would conduct the technical studies with BRL. On Egypt’s insistence, the agreement also stipulated that a technical committee would be formed to study the possibility of increasing openings within the dam. Days later, Ethiopia announced its rejection of Egypt’s request regarding the openings in the dam, without getting the results of the committee’s investigations, which was formed according to the agreement.

In an interview in the London-based Asharq Al-Awsat paper last May, Ethiopian Minister of Information and Communication of Ethiopia Getachew Reda said that his country would not stop building the dam pending finalization of the technical studies. He also said that the dam would cause no harm to Egypt or Sudan. He added that Ethiopia has indeed finished 70 percent of the building work, saying, “If some see after these studies they will be harmed, it wouldn’t be our problem in Ethiopia.”