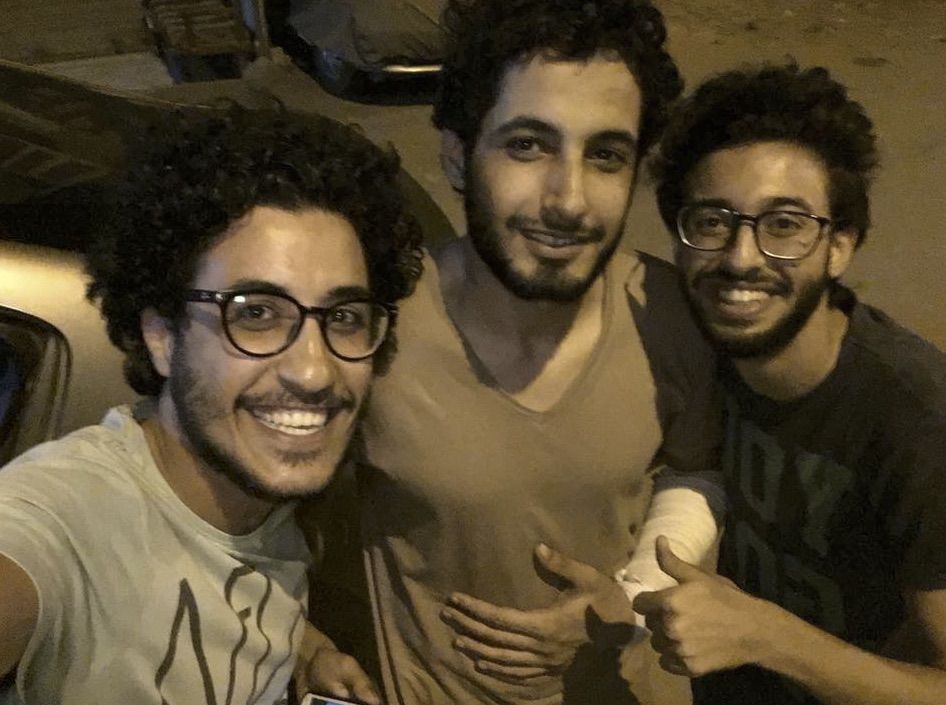 Islam Khalil was released from detention Wednesday night, 10 days after an order was issued for his release and following severe torture by police, according to his lawyers and family members.

His brother Nour Khalil posted a photo on Facebook with the caption, “The street selfie. He can hardly move but he is in the street for real, thanks to your efforts, without which he wouldn’t have been released.”

Following the release order and his family paying LE50,000 bail, police forces refused to release Islam, accusing him of assaulting a police officer, which rights groups claim are trumped-up charges. His lawyers accuse police of torturing him and attempting to force him to confess to belonging to terrorist groups.

The 27-year-old was forcibly disappeared in May 2015, along with his father and brother. Khalil has reportedly been subjected to torture, abuse and mistreatment by police during his entire year in prison.

Several rights groups, including Amnesty International, called on Egyptian authorities to uphold Khalil’s release order, warning of his deteriorating health in detention as a result of persistent torture, which reportedly continued after his release was ordered.

Nour Khalil, Islam’s brother, told Mada Masr he was being held at Santa Police Station in the Nile Delta Governorate of Gharbiya. “He was transferred to this police station on Tuesday, and is being detained on the orders of the National Security Agency,” Nour said.

Although the East Alexandria district prosecutor issued an order for Islam’s release on August 21, and his family paid his bail money in full on August 23, Nour said they were unable to visit him in detention, or to see him from a distance, adding that his lawyer Halem Heneish was only permitted to speak to him briefly on one occasion in the last 10 days.

Heneish told the family that Islam was beaten with pipes on August 25 until he lost consciousness. “After beating him unconscious, he was then accused of assaulting police officers,” Nour says.

The original charges against Islam, of belonging to an outlawed organization, carry a maximum penalty of five years, and the additional charge of assaulting police a fine of LE10,000-20,000, Heneish explained.

Heneish claims he was also threatened by officers at Santa Police Station when he reminded them of his client’s release order. “I was openly told, ‘just because the prosecution ordered his release, doesn’t mean he is going home. Islam is ours’,” he wrote on Facebook.

“Islam has no links to the Muslim Brotherhood, or any other political groups or currents. He was not involved in politics, he was only a sales manager in Cairo. But, since his arrest he has been laid off from his job,” Nour said.

Police raided the family home in Cairo on May 24, 2015. “They had come back for me, as they had previously arrested me for participating in protests, on the third anniversary of the revolution, on January 25, 2014,” Nour explained, adding that Islam and his father were arrested for trying to defend him. Both Nour and his father were released a few days later, while Islam was kept in detention.

“Islam disappeared for 122 days before we found out about his whereabouts at the National Security Agency in Tanta,” Nour said. “There are many contradictions in the charges leveled against Islam. They are all baseless charges to begin with,” he added.

Addressing Egypt’s security apparatus, Nour emphasized: “You should maintain some professional standards, some justice, and abide by some semblance of the law. You should refrain from violating the basic rights and the constitutional rights of the populace. Like thousands of other Egyptians who are locked-up without any real or valid charges, the longer Islam is kept in detention the more likely it is that he will be subjected to further abuse, and face additional trumped-up charges.”

Amnesty International issued a statement on Tuesday, “urging the Egyptian authorities to release Islam Khalil immediately as his detention is unlawful,” adding that he should be “granted immediate access to his family, lawyer and any medical attention he may require pending his release.”

Amnesty also encouraged the Egyptian government “to ensure an independent, impartial investigation is conducted into his allegations of torture and other ill-treatment and prosecute anyone against whom there is sufficient admissible evidence.”

Topics
Related
forced disappearances
After release ruling, detainee Islam Khalil accused of attacking police officer
“They [police] told him, ‘you are the one who is causing all this noise, we got a recommendation
forced disappearances
Behind the sun: Is this the end of the rule of law in Egypt?
Khaled Mansour | The saga of young student Esraa al-Taweel, who disappeared for two weeks last year before security
due process violations
I am talking about all of us: A letter from prison
Two hundred days ago, security forces stormed a house in Santa (a district in Gharbiya Governorate) after