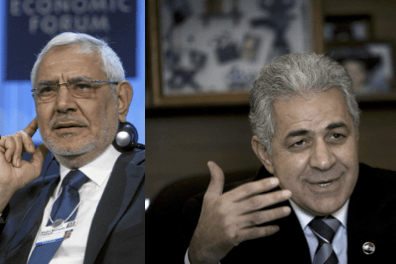 Allegations that Egyptian politicians Abdel Moneim Abouel Fotouh and Hamdeen Sabbahi have spied for Hezbollah and the Iranian Revolutionary Guard were referred Monday to Egypt’s State Security Agency for investigation.

The accusations were leveled by a lawyer, Ashraf Farahat, after the two men attended a yearly meeting of politicians and thinkers from across the Arab world.

Titled “The general Arab conference to support resistance and reject its categorization as terrorism,” the meeting was organized in Lebanon by the Arab National Congress in collaboration with the Islamic National Conference, the General Conference for Arab Parties and the Arab Popular Mobilization Body. The 27th edition of the conference, it marked 10 years since the 34-day July war between Israel and Hezbollah in Lebanon, which ended with Lebanon’s Hezbollah successfully repelling the Israeli attack.

Organizers said in media statements that the conference aimed to demonstrate popular support for resistance movements in response to what they called campaigns led by the US and Saudi Arabia against them. It stated that the Palestinian cause and resistance remain a common ground for Arab political factions to unite around.

In a press release on June 20, Abouel Fotouh, a physician and a leader in the Muslim Brotherhood before quitting the organization in 2011, had said he was participating because he believes it is important to keep an open conversation with resistance factions, even though he disagrees with some of their positions, adding that these movements must be kept on the right path in order to protect Arab nations from the Israeli threat.

Abouel Fotouh is known for his opposition to the governments of former presidents Anwar Sadat and Hosni Mubarak, and ran in the 2012 presidential elections. He is currently the secretary general of the Arab Medical Union.

In his speech at the conference, Abouel Fotouh declared his support for the Syrian revolution against the crimes of Bashar al-Assad’s regime and said the involvement of resistance factions was a mistake, as they should only focus on the Israeli enemy.

Sabbahi’s speech, transcribed on his official Facebook page, asserted that Egypt’s government may normalize relations with Israel, but its people are wholeheartedly with the resistance movements.

Sabbahi, a Nasserist and an oppositional activist under Sadat and Mubarak, ran in the 2012 and 2014 presidential elections, losing the latter to Preseident Abdel Fattah al-Sisi. He is currently the leader of the Egyptian Popular Current and co-leader of the National Salvation Front.

In May 2015, former President Mohamed Morsi and 15 other Muslim Brotherhood members were handed provisional death sentences related to an espionage case involving the Iranian Revolutionary Guard, Qatar and Hamas. Morsi, alongside several other Brotherhood leaders and 100 of its members, was also accused of storming Egyptian prisons and assisting in the escape of several prisoners, including members of Hezbollah during Egypt’s 2011 revolution.

Hezbollah is a Lebanese political and paramilitary group with historical ties to Iran and the Iranian Revolutionary Guard. Its political arm wields considerable influence in the Lebanese parliament, securing veto powers in the Cabinet and bringing down the government in 2011 and 2013. This March the Arab League labeled Hezbollah a terrorist organization, after all members with the exception of Iraq and Lebanon voted in favor of the motion during a foreign ministers’ summit. Some nations, including the US, designate Hezbollah a terrorist organization.

The Iranian Revolutionary Guard was founded shortly after Iran’s 1979 Islamic Revolution, and has served both as a domestic force against dissent and a regional paramilitary group. It has actively participated in the Syrian civil war, among other conflicts, aiding the Syrian regime and cooperating with Hezbollah forces.